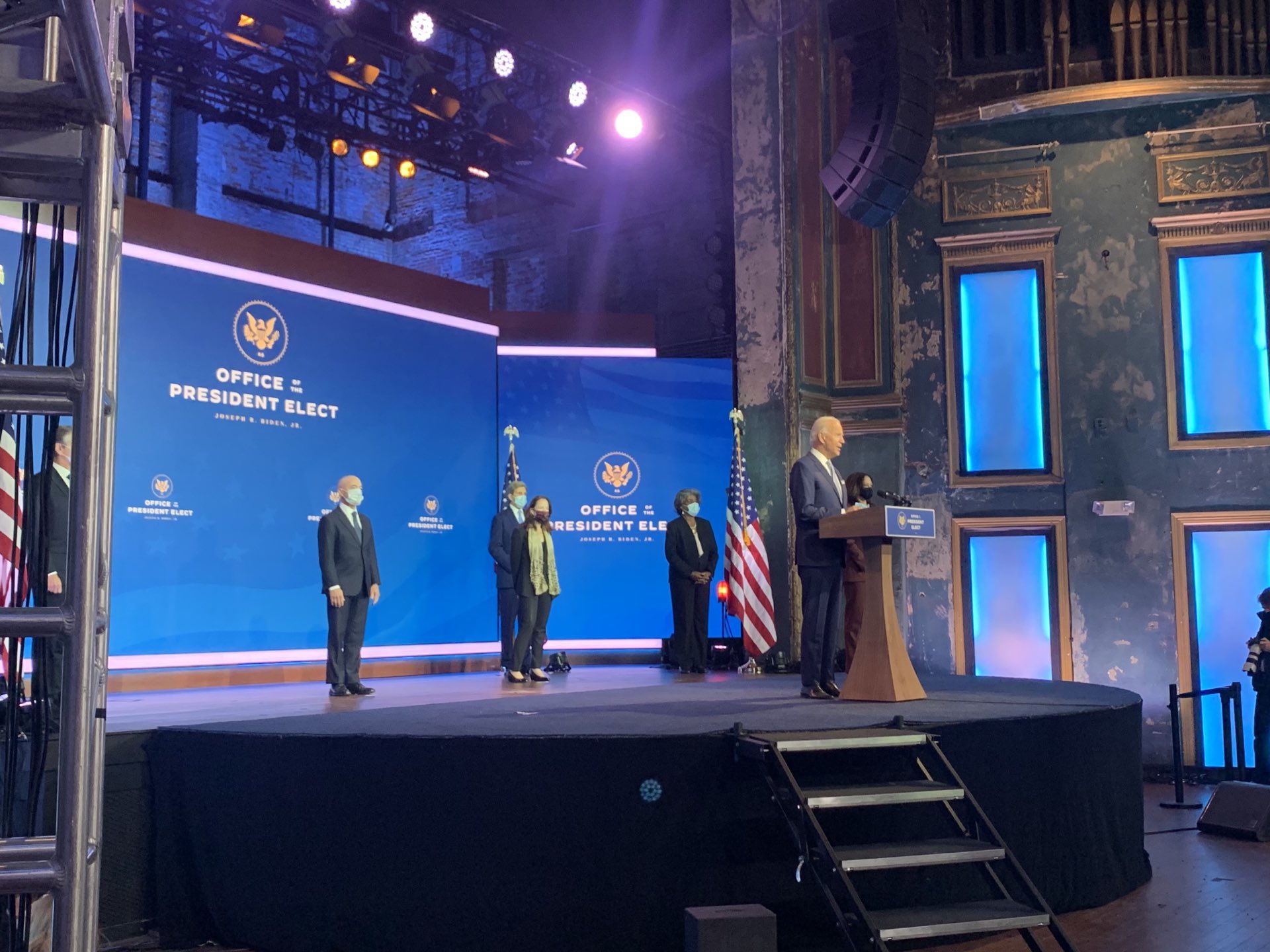 BIDEN TO FINALLY RECEIVE PDB: Three weeks after the election, the White House has given formal approval for President-elect Joe Biden to receive the President’s Daily Brief, CNN reports.

“President-elect Joe Biden is moving quickly to take advantage of government resources for his transition to the White House after the Trump administration ended a 16-day stalemate and announced its intention to begin cooperating with his team,” the Wall Street Journal reports.

“Mr. Biden’s advisers are making plans to meet with career officials at executive agencies to review hundreds of pages of briefing materials and get up to speed on the inner workings of the federal government. Transition officials began reaching out to agency officials on Monday night, immediately after the Trump administration said it would begin working with the president-elect’s team, a transition official said.”

BIDEN’S BALANCING ACT. NBC News: “Biden is attempting the high-wire act of balancing diversity demands with ideological fissures between progressives and moderates. He has sought personnel with government experience who aren’t seen as too controversial to gain approval from a divided Senate. Many were confirmed during the Obama administration, some in deputy positions to roles they have been tapped to fill now.”

“So far, he’s giving everybody from progressive activists to centrist Democrats something to be happy about and little to fight over.”

MIKE MORELL AS CIA DIRECTOR? “President-elect Joe Biden is strongly considering Mike Morell, the former acting director of the Central Intelligence Agency, to run the CIA,” the Daily Beast reports. “But those familiar with the process say that other candidates are still in the mix for the position of the nation’s top spy chief.”

PROGRESSIVES SEEK TO BLOCK DEFICIT HAWK BRUCE REED. “Reps. Alexandria Ocasio-Cortez and Ilhan Omar are boosting a petition against Joe Biden nominating his former chief of staff to a new role in his administration, calling Bruce Reed a ‘deficit hawk’ and criticizing his past support for Social Security and Medicare cuts,” Axios reports.

“Progressives are mounting their pressure campaign after the president-elect did not include any of their favored candidates in his first slate of Cabinet nominees, and they are serious about installing some of their allies, blocking anyone who doesn’t pass their smell test — and making noise if they are not heard.”

YOUTUBE SUSPENDS OANN. “YouTube has barred One America News Network from posting new videos for a week and stripped it of its ability to make money off existing content after the Trump-friendly channel uploaded a video promoting a phony cure for COVID-19,” Axios reports.

TRUMP TRIES TO TAKE CREDIT FOR MARKET SURGE. President Trump gave a brief statement to reporters marking the Dow Jones hitting the “sacred number” of 30,000. Trump spoke for just 64 seconds and quickly fled as the White House press corps bombarded him with questions on whether he’d eventually concede the election. As the president exited the briefing room, one reporter was overheard saying: “Well, that was weird as shit.”

First off, his adjectives are always weird, and I look forward to not hearing the President saying he “very strongly” did something, or that an arbitrary number in the stock market is “sacred.” Second, the Market was reacting positively to the news that the transition to Biden was finally approved, because Wall Street likes stability and certainty rather than chaos and coups.

“Mnuchin plans to place the money into the agency’s General Fund… That fund can only be tapped with ‘authority based on congressionally issued legislation,’ according to the Treasury’s website.”

COMPLAINTS FILED SEEKING TRUMP LAWYERS’ DISBARRMENT. Rep. Bill Pascrell Jr. (D-NJ) filed complaints in five states against Rudy Giuliani and 22 other lawyers working with the Trump campaign, calling for them to be stripped of their law licenses for filing “frivolous” lawsuits and allegedly engaging in “conduct involving dishonesty, fraud, deceit, or misrepresentation,” the Washington Post reports.

TRUMP IS NOT DOING HIS JOB. “In the three weeks since Election Day, President Trump’s most visible presence has been on Twitter. Since Nov. 3, he has posted some 550 tweets — about three-quarters of which attempted to undermine the integrity of the 2020 election results,” the New York Times reports.

“As Mr. Trump’s attacks continue, the coronavirus pandemic rages on, worse than ever. At least 24,000 people in the United States have died from Covid in the past three weeks.”

“Mr. Trump’s public calendar, meanwhile, has been remarkably light, especially relative to his pre-election schedule, when he often attended multiple campaign rallies in a single day.”

“The practice is allowed for lawmakers, with some limitations, under decades-old congressional regulations. The public is barred from carrying weapons in the Capitol, its grounds and office buildings.”

THANKSGIVING IS A MAKE OR BREAK MOMENT FOR THE PANDEMIC. Associated Press: “As governors and mayors grapple with an out-of-control pandemic, they are ratcheting up mask mandates and imposing restrictions on small indoor gatherings, which have been blamed for accelerating the spread of the coronavirus. But while such measures carry the weight of law, they are, in practical terms, unenforceable, and officials are banking on voluntary compliance instead.”

“Good luck with that. While many are undoubtedly heeding public health advice — downsizing Thanksgiving plans, avoiding get-togethers, wearing masks when they’re around people who don’t live with them — it’s inevitable that a segment of the population will blow off new state and local restrictions and socialize anyway. Experts say that could put greater stress on overburdened hospitals and lead to an even bigger spike in sickness and death over the holidays.”

A new Axios-Ipsos poll finds 39% of Americans did not change their Thanksgiving plans due to the pandemic.

BIDEN CAMPAIGN V. OBAMA ESTABLISHMENT? I always figured they were one and the same. Ryan Lizza: “It is still early in the Biden transition. There are thousands of jobs to fill. But a similar sense of dread is starting to bubble up from veterans of the Biden campaign, particularly those who were there with the president-elect from the Philadelphia announcement speech to the Wilmington victory speech. The target of their ire? The Obama establishment, which has eclipsed the Clinton name as shorthand for yesterday’s Democratic Party.”

Said one senior Biden official: “The Obama staffers are now cutting out the people who got Biden elected, None of these people found the courage to help the VP when he was running and now they are elevating their friends over the Biden people. It’s fucked up.”

LAME DUCK TERM? Playbook: “Joe Biden is 78 and expected by many to serve only one term. Speaker Nancy Pelosi has all but said this is her last term. Senate Minority Leader Chuck Schumer is up for reelection in 2022.” “When you’re on your way out, it typically means you have less power. But if everyone’s on their way out…”

“President Trump is threatening to veto legislation to fund the military as one of his final acts in office unless a widely supported, bipartisan provision to rename military bases honoring Confederate military leaders is removed,” NBC News reports.

“Since the Nov. 3 election, Trump has privately told Republican lawmakers that he won’t back down from his position during the campaign that he would veto the annual National Defense Authorization Act if it includes an amendment to rename the bases.”

BIDEN TO RESTORE CDC OFFICIALS SHUNNED BY TRUMP. Politico: “President-elect Joe Biden is putting scientists in charge and back on the stage to restore trust in the Centers for Disease Control and Prevention. The plans include immediately reviving regular media briefings and giving a central role to long-sidelined career officials including Nancy Messonnier, the public health official who first warned of the ‘severe’ impact of the Covid-19 back in February.”