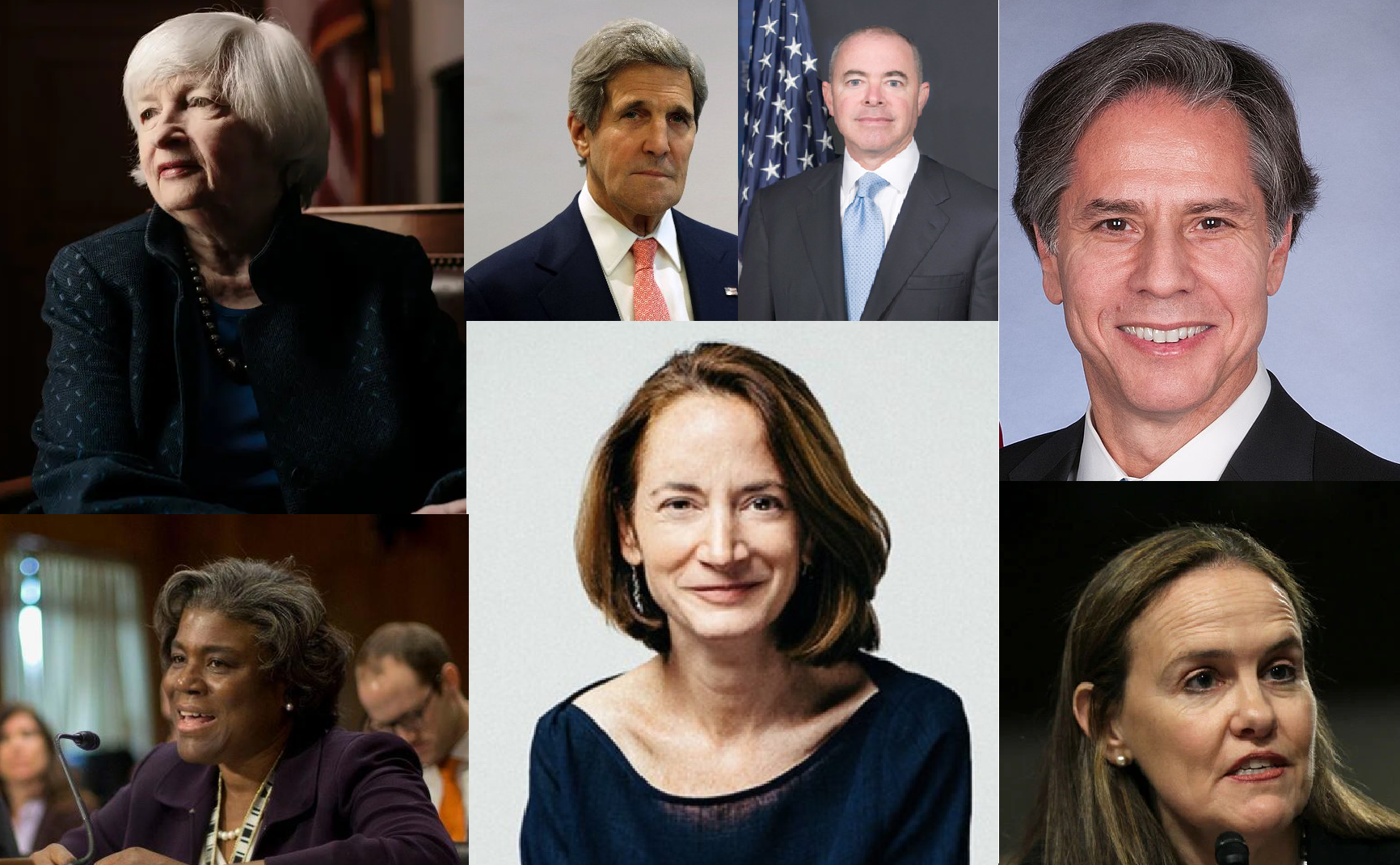 The General Services Administration has informed President-elect Joe Biden that the Trump administration is ready to begin the formal transition process, CNN  reports.

New York Times: “Mr. Trump had been resisting any move toward a transition. But in conversations in recent days that intensified Monday morning, top aides — including Mark Meadows, the White House chief of staff; Pat Cipollone, the White House counsel; and Jay Sekulow, the president’s personal lawyer — told the president the transition needed to begin. He did not need to say the word ‘concede,’ they told him.”

“Some of the advisers drafted a statement for the president to issue. In the end, Mr. Trump did not put one out, but aides said the tone was similar to his tweets in the evening, in which he appeared to take credit for Ms. Murphy’s decision to allow the transition to begin.”

John Bennett: Trump goes out with a whimper and a tweet. It was always going to be that way.

“President-elect Joe Biden plans to nominate former Federal Reserve Chairwoman Janet Yellen, an economist at the forefront of policy-making for three decades, to become the next Treasury secretary,” the Wall Street Journal reports.

“If confirmed by the Senate, Ms. Yellen would become the first woman to hold the job.”

CNBC: “Yellen is widely seen as a politically “safe” pick for the role, likely to garner support from Senate Republicans as someone capable of pursing bipartisan compromise during an otherwise fragile time for the economy.”

President-elect Joe Biden on Monday unveiled his nominations for top national security positions in his administration:

New York Times: “The emerging team reunites a group of former senior officials from the Obama administration, most of whom worked closely together at the State Department and the White House and in several cases have close ties to Mr. Biden dating back years. They are well known to foreign diplomats around the world and share a belief in the core principles of the Democratic foreign policy establishment — international cooperation, strong U.S. alliances and leadership but a wariness of foreign interventions after the wars in Iraq and Afghanistan.”

Axios: “The list, set to be announced at an event in Delaware on Tuesday, is a deliberate effort to package nominees in a way that suggests diversity — a ‘first’ for women and Latinos, a Black woman, and a white man.”

“The most remarkable part of President-elect Biden’s campaign and early picks for positions of true power is the unremarkable — and predictable — nature of his big moves,” Axios reports. “Biden is obsessed with bringing stability and conventional sanity back to governance.” Said one source familiar with his thinking: “He is approaching this — in part — like an experienced mechanic intent on repairing something that’s been badly broken.”

“President-elect Joe Biden’s transition team unveiled his picks for top national security positions on Monday. But one post was notably absent from the list: secretary of Defense,” Politico reports.

“Biden-watchers and national security veterans saw the omission as a sign that Michèle Flournoy, the woman who has been rumored for months to be a shoo-in for Biden’s Pentagon chief, might not have a lock on the job after all.”

“While Flournoy is still a strong contender, six people close to the transition say Biden is not entirely sold on the woman who was widely seen as Hillary Clinton’s pick for Defense secretary if she had won the presidency in 2016.”

Foreign Policy reports that “backers of Michèle Flournoy, his likely pick for defense secretary, are trying to head off a last-minute push by some left-leaning Democrats trying to derail her selection, with many progressives seeing her nomination as a continuation of what critics refer to as America’s ‘forever wars.’”

“The U.S. recorded a drop in newly reported Covid-19 infections following an all-time high, but it also reported record hospitalizations for the 12th straight day as the coronavirus pandemic rages,” the Wall Street Journal reports.

Washington Post: “At the heart of this optimism is the belief that politicians on both sides of the aisle get more accomplished when they like each other. And the other business of Washington — the cultural institutions, the diplomatic corps, the gala fundraisers, the hundreds of historical traditions — need bipartisanship to really thrive. They struggled during the Trump administration, when everything became a test of loyalty and the notion that good people could disagree without being disagreeable was laughable.”

“Back to normal will mean more state dinners, a prestigious and glamorous way of reestablishing global ties. And it means that Washington events traditionally attended by the president and first lady for the better part of five decades — the Honors, the Alfalfa dinner, the Gridiron, Ford’s Theatre gala and the correspondents’ dinner — will likely return to their former glory.”

“Secret Service agents in the president’s detail are being asked whether they’re interested in transferring to Palm Beach, Florida,” ABC News reports. “The Secret Service’s Miami field office also has begun looking at physical reinforcements to Mar-a-Largo, the president’s golf club to which he refers as ‘the winter White House.’”

“JP Morgan economists now see an economic contraction in the first quarter due to the spreading coronavirus and related restrictions being imposed by states and cities,” CNBC reports. “The new forecast is a departure from Wall Street’s widely held view that the first quarter would be positive, with an improving economy throughout 2021.”

Advisers to President-elect Joe Biden are planning for the increasing likelihood that the United States economy is headed for a “double-dip” recession early next year, the New York Times reports. “They are pushing for Democratic leaders in Congress to reach a quick stimulus deal with Senate Republicans, even if it falls short of the larger package Democrats have been seeking.”

“On its way out the door, the Trump administration is enacting new rules, regulations and orders that it hopes will box in President-elect Joe Biden’s administration on numerous foreign policy matters and cement President Trump’s ‘America First’ legacy in international affairs,” the AP reports.

“Yet, the push may not work, as many of these decisions can be withdrawn or significantly amended by the incoming president when he takes office on Jan. 20.”

“The company also signaled that it was ready to work with President-elect Joe Biden, who has promised swift action to reduce climate-warming emissions in the auto sector.”

New York Times: “The stakes of prosecuting Donald Trump may be high; but so are the costs of not prosecuting him, which would send a dangerous message, one that transcends even the presidency, about the country’s commitment to the rule of law. Trump has presented Biden — and America, really — with a very difficult dilemma.”

Said former New Jersey Attorney General Ann Milgram: “This whole presidency has been about someone who thought he was above the law. If he isn’t held accountable for possible crimes, then he literally was above the law.”

Washington Post: “Following unexpected Election Day setbacks, Democrats could hold as few as 222 seats when the new Congress convenes. That number, just a handful of seats over the majority threshold of 218, will drop further when Rep. Cedric Richmond (D-LA) resigns to join the Biden administration as a senior adviser to the president.”

“The governing implications for President-elect Joe Biden, House Speaker Nancy Pelosi (D-CA) and Democratic congressional leaders are stark: Pushing any sort of partisan measure through the House will require near-unanimity inside their party, forcing careful negotiations with various factions of lawmakers and perhaps fewer aspirational ‘messaging’ bills meant to set out Democratic ideals but not necessarily become law.”

“Meanwhile, an emboldened Republican minority will look to wreak havoc and magnify internal disputes ahead of the 2022 midterms.”

Rick Hasen: “The good news is that there is no real prospect that Mr. Trump can avoid a reluctant handover of power on Jan. 20. The bad news is that Mr. Trump’s wildly unsubstantiated claims of a vast voter fraud conspiracy and the litigation he has brought against voting rights have done — and will increasingly do — serious damage to our democracy.”

“Our problems will deepen, in particular, because Mr. Trump’s litigation strategy has led to the emergence of a voter-hostile jurisprudence in the federal courts. New judicial doctrines will put more power in the hands of Republican legislatures to suppress the vote and take voters, state courts and federal courts out of key backstop roles.”

Dan Pffeiffer: “The leading theory in Washington is cowardice. Most political observers believe that for the last four years Republicans remained silent about Trump’s chaotic incompetence and crass corruption out of trepidation. Whenever a Republican enables another Trump transgression, every liberal blue checkmark tweets ‘COWARD.’ The sense among reporters is that Republicans don’t like what Trump says or does, but if they speak up they will be tweeted out of the party.”

“Cowards want to to do the right thing but are too afraid to do it. I do not believe the Republicans want to do the right thing and I do not believe they are concerned about the damage Trump is doing to our democracy. Ultimately what bothers them about Trump is not that he is a racist authoritarian. It’s that he is a clumsy, incompetent racist authoritarian. The Republican supplication to Trump’s whims — before and after the election — is not cowardice, it’s calculation.”

First Read: “What’s gotten lost in all of the focus on President Trump’s lawsuits, his baseless accusations of voter fraud and his administration’s unwillingness so far to begin the transition is a simple fact. The 2020 presidential election wasn’t really that close.”

“Right now, Joe Biden’s popular-vote lead over Trump stands at 4 percentage points, 51 percent to 47 percent – and it’s only going to grow once more of New York’s votes (finally) get counted. That would give Biden the second-largest popular vote margin out of the 21st century’s six presidential elections, with only Barack Obama’s 7-point win in 2008 being greater.”

“When it comes to the Electoral College, the tally stands at Biden 306, Trump 232 – which happens to be the exact same split as Trump’s 2016 win versus Hillary Clinton (but in reverse). And Trump referred to that as a ‘massive landslide victory.’”

Carl Bernstein reports that 21 Republican Senators — in conversations with colleagues, staff members, lobbyists and White House aides — have repeatedly expressed extreme contempt for Donald Trump and his fitness to be president.

Said Bernstein: “With few exceptions, their craven public silence has helped enable Trump’s most grievous conduct—including undermining and discrediting the US the electoral system.”

“Sen. Dianne Feinstein (D-CA) will not pursue leadership of the high-profile Senate Judiciary Committee or any other committee next year, taking a dramatic step back following pressure from progressives who questioned her willingness to use tough, partisan politics to confirm Biden administration Supreme Court picks and other judicial nominations,” the Los Angeles Times reports.

Said Feinstein: “California is a huge state confronting two existential threats — wildfire and drought — that are only getting worse with climate change. In the next Congress, I plan to increase my attention on those two crucial issues.”

Sen. Dick Durbin (D-IL) said on Monday he will seek to become the top Democrat on the Senate Judiciary Committee next year, after Sen. Dianne Feinstein (D-CA) said she will step down from the position, Axios reports.