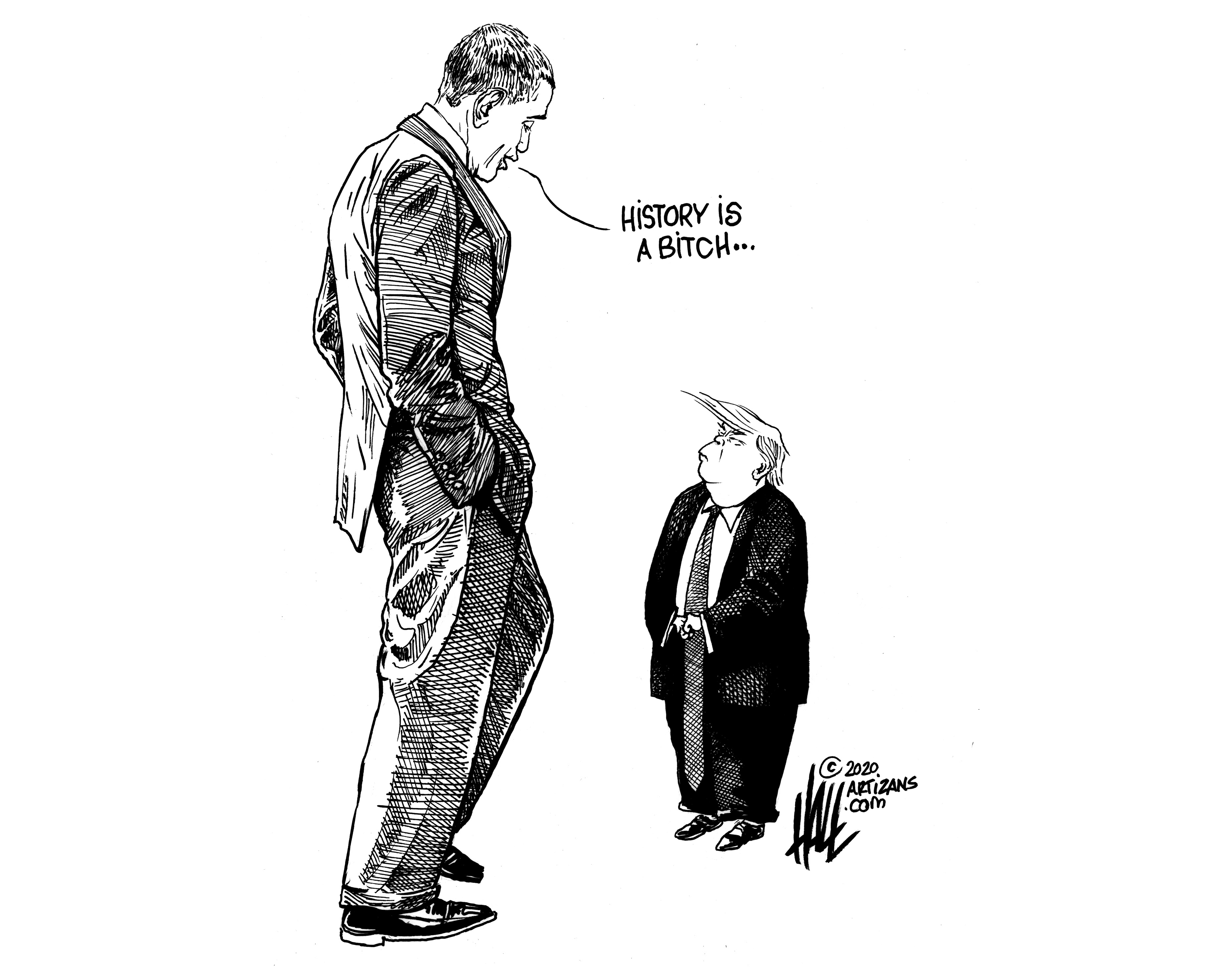 “President Trump and his allies are taking increasingly frantic steps to subvert the results of the 2020 election, including summoning state legislators to the White House as part of a longshot bid to overturn Joe Biden’s victory,” the AP reports.

“Among other last-ditch tactics: personally calling local election officials who are trying to rescind their certification votes in Michigan, suggesting in a legal challenge that Pennsylvania set aside the popular vote there and pressuring county officials in Arizona to delay certifying vote tallies.”

“Election law experts see it as the last, dying gasps of the Trump campaign and say Biden is certain to walk into the Oval Office come January. But there is great concern that Trump’s effort is doing real damage to public faith in the integrity of U.S. elections.”

“Most of President Trump’s closest advisers have completely distanced themselves from his legal effort and are avoiding his lawyers to avoid being swept into their courtroom dramas,” Axios reports. “Some of the president’s advisers act like they think he can still overturn the election results — because they remain on the payroll and don’t have another choice. But talk to them privately, and many say Rudy Giuliani and his team are on a dead-end path.”

Whatever Trump was trying to do with his meeting with the Republican Michigan lawmakers, it didn’t work, or at least it doesn’t appear to have worked.

Michigan’s top Republican lawmakers said Friday after a meeting with President Trump at the White House that they have not seen any information that would change President-Elect Joe Biden’s victory in the state, a blow to the president’s efforts to undermine the election results, the Washington Post reports. In a statement, they vowed not to interfere with the certification process that is expected to be finalized on Monday.

“Two separate New York State fraud investigations into President Trump and his businesses, one criminal and one civil, have expanded to include tax write-offs on millions of dollars in consulting fees, some of which appear to have gone to Ivanka Trump,” the New York Times reports.

“The inquiries — a criminal investigation by the Manhattan district attorney, Cyrus R. Vance Jr., and a civil one by the state attorney general, Letitia James — are being conducted independently. But both offices issued subpoenas to the Trump Organization in recent weeks for records related to the fees.”

Ivanka Trump called New York state investigations into her father’s business dealings “harassment,” seeming to confirm that the probes now include tax write-offs that appear to involve her, Politico reports.

Stat: “It is unclear how long the FDA will take to review the application, though the agency is expected to move swiftly. Agency officials have pledged to seek advice from an expert panel of outside experts…”

“It is widely expected that the FDA will then issue an emergency use authorization for the two-dose vaccine, which has been shown to be highly effective in preventing Covid infections. Officials have said they hope to begin vaccination of health workers — who will be at the front of the line for the limited first doses — in some locations within days of the authorization.”

Politico: “The strategies under discussion, according to four experts advising Biden, include increasing the availability of cheap, rapid tests; using the Defense Production Act to beef up the supply of pipettes, chemicals and other key testing materials; and strengthening federal coordination of testing.”

“If successful, Biden’s approach would turn the testing system into a tool capable of reducing infections, rather than merely documenting the pandemic’s toll.”

“Overwhelmed hospitals are converting chapels, cafeterias, waiting rooms, hallways, even a parking garage into patient treatment areas. Staff members are desperately calling around to other medical centers in search of open beds. Fatigue and frustration are setting in among front-line workers,” the AP reports.

“Conditions inside the nation’s hospitals are deteriorating by the day as the coronavirus rages across the U.S. at an unrelenting pace and the death toll surpasses 250,000.”

“Senate Republicans are signaling they will confirm most of President-elect Joe Biden’s Cabinet picks in January — a rare bright spot for a White House that may clash with a GOP majority for years to come,” Politico reports.

“Many Republicans won’t even publicly concede that Biden will be the next president while President Donald Trump fights to overturn the election results. But a critical mass of GOP senators said in interviews that Biden has the right to his Cabinet, indicating he may be able to staff his administration largely to his liking.”

Politico: “Four senior House Democrats are demanding that GSA Administrator Emily Murphy brief them Monday on the reason she has yet to ascertain Joe Biden’s win in the presidential election, warning that her answers will determine whether they intend to haul her to Capitol Hill for a public hearing.”

“President Trump told an ally that he knows he lost, but that he is delaying the transition process and is aggressively trying to sow doubt about the election results in order to get back at Democrats for questioning the legitimacy of his own election in 2016, especially with the Russia investigation,” CNN reports.

“President Trump’s attempts to overturn the 2020 election are unprecedented in American history and an even more audacious use of brute political force to gain the White House than when Congress gave Rutherford B. Hayes the presidency during Reconstruction,” the New York Times reports.

“Mr. Trump’s chances of succeeding are somewhere between remote and impossible, and a sign of his desperation after President-elect Joe Biden won by nearly six million popular votes and counting, as well as a clear Electoral College margin. Yet the fact that Mr. Trump is even trying has set off widespread alarms, not least in Mr. Biden’s camp.”

“We have never seen anything like this before. This is a president abusing his very great powers to try to stay in office, even though it is obvious to everyone that he has been defeated in the polls. That is a prospect that terrified most of the founders.” — Presidential historian Michael Beschloss, quoted by the Washington Post.

“He is undermining the very essence of democracy, which is: You go to the poll, you vote and the people decide. There’s no doubt that the people decided. I think this borders on treason.”  — House Majority Leader Steny Hoyer (D-MD), quoted by the Washington Post, on President Trump’s attempts to overturn the election results.

Sen. Mitt Romney (R-UT) on Twitter:  “Having failed to make even a plausible case of widespread fraud or conspiracy, the president has now resorted to overt pressure on state and local officials to subvert the will of the people and overturn the election. It is difficult to imagine a worse, more undemocratic action by a sitting American president.”

Federal appeals court Judge Merrick Garland is under consideration to serve as attorney general in the administration of President-elect Joe Biden, NPR reports.

“Former Chicago Mayor Rahm Emanuel is under consideration to lead the department of transportation, a move that would enrage progressive activists if the former Illinois congressman and White House chief of staff was ultimately nominated to join the President-elect Joe Biden’s Cabinet,” CNN reports.

“Emanuel has expressed his interest in the post, telling allies that the nation’s infrastructure challenges are so dire that a person with experience from the executive and legislative branch would be an asset.”

President-elect Joe Biden has made his choice for secretary of state, moving quickly to assemble a Senate-confirmable Cabinet even as President Trump refuses to concede the election, Axios reports.

Biden is expected to roll out several top Cabinet picks next week.

Geraldo Rivera suggested on Fox News that we name the coronavirus vaccine after President Trump to soften the blow of his election defeat.  Said Rivera: “It would be a nice gesture to him and years from now it would become kind of a generic name. Have you got your trump yet, I got my trump, I’m fine. I wished we could honor him in that way.”

No. But we can name the virus after him. Or perhaps a form of cancer or mental illness.

Joe Biden said his choice for Treasury secretary would win wide praise among Democrats, Politico reports.  Said Biden: “You’ll find it is someone who I think is — will be accepted by all elements of the Democratic Party, from the progressive to the moderate coalitions.”

“The ONLY name among current candidates that fits this description is former Fed Chair Janet Yellen… Lael Brainard does not (though she really should.) Neither does Roger Ferguson, a former vice chair of the Fed and head of TIAA-Cref. Neither of those people would satisfy strong progressives.”

“Bernie Sanders and Elizabeth Warren, leaders of the Democratic Party’s left wing, are at risk of being excluded from the senior ranks of President-elect Joe Biden’s administration as the incoming president balances the demands of his party’s progressive base against the political realities of a narrowly divided Senate,” the AP reports.

“The liberal New England senators remain interested in serving in Biden’s Cabinet, but even some of their allies recognize they face major political hurdles getting there. Sensing disappointment, progressive leaders have reluctantly begun to express support for less-controversial alternatives.”

Both also have Republican Governors of their states who would appoint Republican replacements. Can’t have that in a 50-50 Senate.

National Review: “The Rudy Giuliani–led press conference at the RNC yesterday was the most outlandish and irresponsible performance ever by a group of lawyers representing a president of the United States.”

“If Giuliani’s charge of a “national conspiracy” to produce fraudulent votes in Democratic cities around the country wasn’t far-fetched enough, attorney Sidney Powell ratcheted it up with the allegation that Communist-designed election machinery was used to change the vote from a Trump landslide to a narrow Biden victory. An obvious question is why, if you can manipulate the vote count via machine, you’d need to bother with old-fashioned fraudulent ballots. Powell’s story is that the surprisingly strong Trump turnout “broke the algorithm” of the corrupted machines, and then the fraudulent ballots were desperately hauled in to make up the difference.”

“This is lawyering worthy of the comments section of Breitbart News.”

“When it comes to protecting sensitive information from foreign hackers, President-elect Joe Biden’s team is largely on its own,” the Wall Street Journal reports.

“The federal government, which has some of the most sophisticated antihacking technologies in the world, is offering limited assistance to Mr. Biden’s transition operation in securing its email and other communications, despite concerns that the team is likely a top espionage target for Russia, China, and other adversaries, according to people familiar with the transition.”

Washington Post: “Less than 48 hours before the scheduled start of the global summit, the White House will not say whether President Trump will participate in the event, which is being hosted by Saudi Arabia but held virtually due to the coronavirus pandemic.”