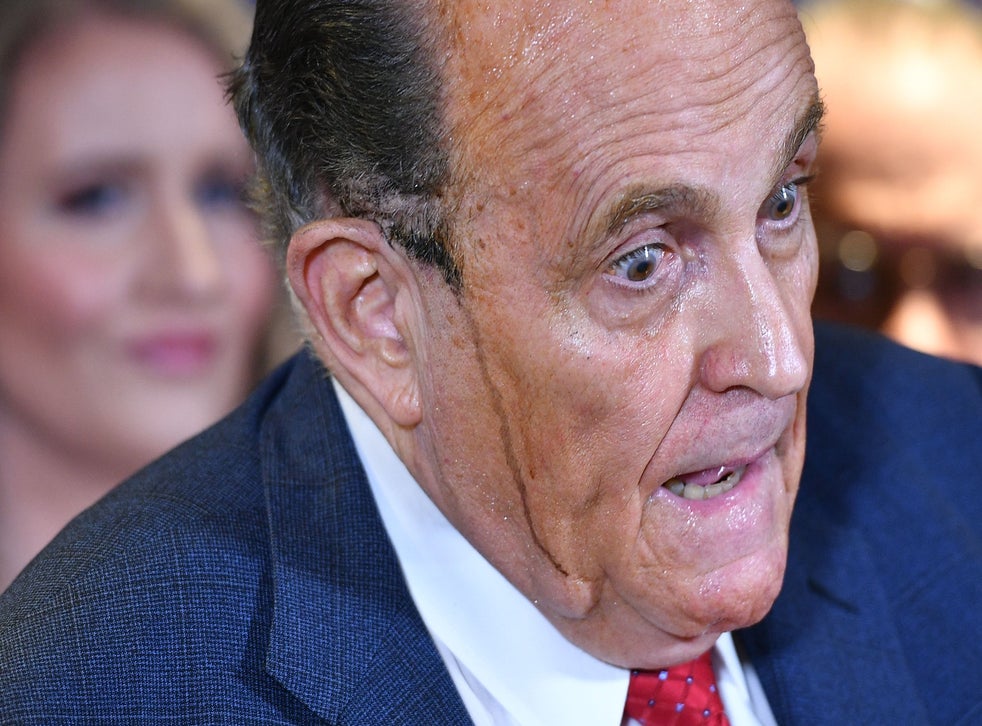 Rudolph, what can I say. You need to be self aware. You are old. What remains of the hair on your head is gray. Stop coloring it, especially when you have some kind of condition that causes you to sweat profusely even while sitting. But I guess Rudy wanted to look his best during his batshit insane news conference alleging massive voter fraud across the United States while presenting not a single piece of credible evidence supporting those allegations.

The Trump theory is literally this, and I am not making this up: George Soros, Biden, the Clinton Foundation & the Antifa worked with a dead Hugo Chavez to rig the election by making big Dem cities vote for the Democratic candidate, which is what big Dem cities tend to do anyway. But they also let Republicans win Senate, Congressional and local races. How cleverly fiendish of them!

“Rudy Giuliani, President Trump’s top campaign lawyer, laid out a string of baseless charges claiming that Joe Biden’s campaign had rigged the election in state after state Thursday afternoon, spinning out conspiracy theories that have already fallen apart in numerous court cases as he called for Biden’s clear election wins to be overturned in multiple states.”

Said Giuliani: “It’s a common plan, it’s a common scheme, it comes directly from the Democrat Party and it comes from the candidate.”

Ron Brownstein: “Congressional Republicans may be engaged in the political equivalent of a murder-suicide by abetting Donald Trump’s claims that the election was stolen from him.”

“By reinforcing Trump’s baseless narrative that he actually won the vote, Republicans could be suffocating President-elect Joe Biden’s already-slim chances of attracting any meaningful support from rank-and-file Republican voters, which will make it much tougher for him to build bipartisan coalitions in Congress. But by supporting Trump’s claims—either overtly or through their silence—Republicans are simultaneously cementing his position as the dominant figure in the GOP, snuffing out their chances of reconsidering the course he has set for their party.”

Another Trump campaign lawyer has withdrawn from the election lawsuit in Pennsylvania, as the president’s legal efforts to block Joe Biden’s victory dwindle.

NBC News: “The Republican Senate leader told members in a closed-door lunch on Tuesday to ‘be careful’ and make sure they take the necessary precautions against catching the virus.”

“McConnell’s latest admonishment comes as Senate Republicans are trying to accomplish what they can in the final weeks of Donald Trump’s lame-duck presidency, stretched thin and getting little help from a president focused on fighting the results of the election.”

“There are a lot of items on McConnell’s agenda in the final weeks of the year, including passing a government funding bill by December 11 to avoid a shut down, trying to find agreement on coronavirus aid and approving final appointments before President-elect Joe Biden takes over the White House in January.”

The CDC issued new guidance on Thursday advising Americans not to travel for Thanksgiving, warning doing so may increase the chance of getting and spreading the coronavirus.

“Coronavirus cases are rising in almost every U.S. state. But the surge is worst now in places where leaders neglected to keep up forceful virus containment efforts or failed to implement basic measures like mask mandates in the first place,” the New York Times reports.

No shit. Just like the worst COVID outbreaks in Delaware are all in MAGA strongholds.

David Graham: “Almost a quarter million Americans have died from COVID-19. Some 77,000 are now hospitalized, about a fifth of those in the ICU. The country has been reporting roughly 150,000 cases a day for a week, and the numbers seem likely to rise. Hospitals, and the people who work in them, are overwhelmed. The pandemic has been a catastrophe for months, but it seems to be reaching its worst moment in the United States, despite promising advances in vaccine development.”

“The nation cries out for leadership, yet amid one of the worst crises to face the country in decades, President Trump is nowhere to be found.”

“Before November 3, the question of what Trump might do in the likely event of a loss was a topic of speculation: Would he cling to office, denying the results of the election? Or would he quit and slink away? The answer, we now know, is both: He has abdicated nearly all of the work of the presidency, but without either putting a temporary successor, such as Vice President Mike Pence, in charge, or allowing the formal transition to President-elect Joe Biden to begin.”

“The top two leaders in the Republican-controlled Michigan Legislature are expected to visit the White House Friday,” the Detroit News reports.

“The visits by Senate Majority Leader Mike Shirkey (R) and House Speaker Lee Chatfield (R) will come as a legal fight plays out in the battleground state with President Trump attempting to challenge the results of the Nov. 3 election.”

“Having so far faced a string of losses in legal cases challenging the Nov. 3 results, Trump’s lawyers are seeking to enlist fellow Republicans who control legislatures in Michigan and Pennsylvania, which went for Trump in 2016 and for Biden in 2020.”

A real headline from the New York Times: “Trump Asks Michigan Lawmakers to White House In Bid to Subvert Election”

Said Boies: “There is no way that Trump can overturn these election results.”

Sen. Mitt Romney (R-UT) warned in a CNN interview that the consequences of actions taken by President Trump during the lame duck period of his term are “potentially more severe” than those caused by the delayed presidential transition.

Said Romney: “The consequences of what’s happening during this lame duck period, I think, are potentially more severe than the consequences associated with a late transition process.”

“Romney cited the Trump administration’s plan to remove more troops from the Middle East as one lame duck move that could cause more damage than Trump’s refusal to formally begin the transition process.”

Associated Press: “Fighting to challenge an election he lost to President-elect Joe Biden, Trump has launched a barrage of lawsuits across the country. Top Republicans have stood behind him and said they will wait for those cases to be resolved before officially recognizing the winner, a standard that has no modern precedent.”

“But his attorneys have repeatedly made elementary errors in those high-profile cases: misspelling ‘poll watcher’ as ‘pole watcher,’ forgetting the name of the presiding judge during a hearing, inadvertently filing a Michigan lawsuit before an obscure court in Washington and having to refile complaints after erasing entire arguments they’re using to challenge results.”

“The pending meetings with staff on relevant committees come as the Trump administration is blocking Mr. Biden’s team from embedding in federal agencies, a typically routine part of the transition process.”

“Joe Biden’s transition team has tried to project calm as President Donald Trump refuses to concede and many Republicans — and even one key part of the federal government — continue to have his back,” Politico reports.

“But behind the scenes, Biden’s advisers are in the midst of a fierce lobbying blitz to get Trump’s allies to crack. They’re dispatching emissaries from past administrations — Republican and Democrat — along with a wide array of business and interest group leaders to intercede on Biden’s behalf. According to three transition officials, Biden’s team is in talks with multiple Republican leaders and officeholders to end the transition stalemate, warning them of risks to national security and public health if the president-elect isn’t granted access to the government.”

Associated Press: “In Wayne County, the two Republican canvassers at first balked at certifying the vote, winning praise from Trump, and then reversed course after widespread condemnation.”

“A person familiar with the matter said Trump reached out to the canvassers, Monica Palmer and William Hartmann, on Tuesday evening after the revised vote to express gratitude for their support. Then, on Wednesday, Palmer and Hartmann signed affidavits saying they believe the county vote ‘should not be certified.’”

Palmer told the Washington Post: “I did receive a call from President Trump, late Tuesday evening, after the meeting. He was checking in to make sure I was safe after hearing the threats and doxing that had occurred.”

Uh huh. It is worth noting that these two Republican fascists cannot rescind their vote. The Wayne County vote has been certified and there are no take backs. So they can go fuck themselves.

Federal Reserve Chairman Jerome Powell had indicated in remarks Tuesday that he didn’t think it would be appropriate to allow the programs to expire.

“There is new and disturbing information in the alleged militia plot against the governor of Michigan,” WLS reports.

“The 14 men charged had far more violent plans than just a kidnapping… New filings claim there was a Plan B the militiamen had drawn up, that involved a takeover of the Michigan capitol building by 200 combatants who would stage a week-long series of televised executions of public officials.”

“And, according to government documents now on file in lower Michigan court, there was also a Plan C — burning down the state house, leaving no survivors.”

“President-elect Joe Biden’s transition team is weighing whether to give Trump administration coronavirus coordinator Deborah Birx a role in its Covid-19 response, even as it prepares a broader purge of officials closely tied to the president’s handling of the pandemic,” Politico reports.

“The debate over Birx’s future has vexed transition officials, with advocates for the longtime public health official arguing that her experience on the front lines of the pandemic could aid a Biden administration that will be thrust into the middle of a deepening crisis.”

“Yet others are far more skeptical, voicing worries that her nine months as coordinator for the Trump White House’s coronavirus task force have permanently eroded her credibility — and that keeping Birx on would jeopardize Biden’s plan for selling the American public on a full reset of the federal government’s pandemic response.”

“Greenhouse gases generated by the U.S. economy will slide 9.2 percent this year, tumbling to the lowest level in at least three decades,” the Washington Post reports.

“Battered by the coronavirus pandemic, the stalled economy is projected to have generated 5.9 billion metric tons of emissions, about the same level as 1983.”

“A handful of current Trump administration officials, as well as some political appointees who left in recent months, have quietly started to reach out to members of President-elect Joe Biden’s transition team,” CNN reports.

“The outreach is a sign that President Donald Trump’s refusal to concede the election and the continued obstruction from the White House is beginning to frustrate even those affiliated with the administration.”