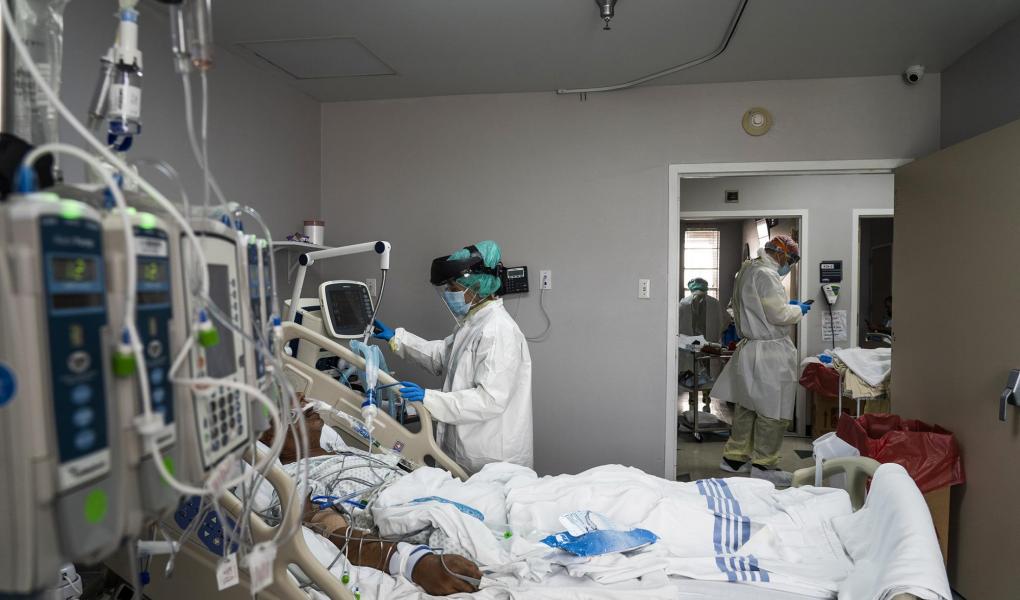 Dr. Anthony Fauci told NBC News that he’s concerned that the Trump administration has not yet greenlighted the formal transition to the incoming Biden administration, which the infectious disease expert said is key to the quick distribution of a Covid-19 vaccine.

Moderna said its experimental coronavirus vaccine was 94.5% effective at protecting people from Covid-19 in an early look at pivotal study results, the second vaccine to hit a key milestone, the Wall Street Journal reports.

In light of highly encouraging vaccine data from Pfizer and Moderna, former Food and Drug Administration Commissioner Scott Gottlieb told CNBC that the coronavirus pandemic can be “effectively” ended in 2021.

“In the states where the virus is spiking highest — particularly in the Upper Midwest — Republicans made substantial gains down-ballot. Often they did so by railing against the very tool that scientists say could best help arrest the virus’s spread,” the Washington Post reports.

“Victories in state and local races have allowed GOP leaders to claim a mandate for their let-it-be approach to pandemic management, with pleas for ‘personal responsibility’ substituting government intervention. As hospitals fill and deaths climb, it’s a philosophy that public health experts warn could have disastrous consequences this winter.

“President Trump’s refusal to concede the election has entered a more dangerous phase as he stokes resistance and unrest among his supporters and spreads falsehoods aimed at undermining the integrity of the American voting system,” the New York Times reports.

“More than a week after President-elect Joe Biden was declared the winner, Mr. Trump continues to block his successor’s transition, withholding intelligence briefings, critical information about the coronavirus pandemic and access to the vast machinery of government that Mr. Biden will soon oversee.”

The New York Times reports that, as the coronavirus surges again, thousands of medical practices are shutting down as doctors and nurses seek early retirement or jobs that don’t cause such intense stress.

Wall Street Journal: “In earlier surges, infections were concentrated in cities such as New York and Chicago, or populous states like Florida and Texas. Many of the outbreaks then were linked to travelers returning from overseas or so-called superspreading events such as conferences, weddings and rallies.”

“Now, it is everywhere. People are becoming infected not just at big gatherings, but when they let their guard down, such as by not wearing a mask, while going about their daily routines or in smaller social settings that they thought of as safe—often among their own families or trusted friends.”

“The number of confirmed cases is rising significantly in all but a few states… Most of the new cases are in the Midwest, which is experiencing a major surge. But even states and cities that had successfully beaten the virus down to low levels are struggling with rising numbers of illnesses.”

Associated Press: “More than 11 million cases of the coronavirus have now been reported in the United States, with the most recent million coming in less than a week.”

John Oliver explained how weak Donald Trump’s case for overturning this election is and what real harm “humoring” him will do.

Said Oliver: “Trump is playing a dangerous game here. Because there is a huge difference between ‘not my president’ and ‘not the president.’ And to be clear, people who are that angry are not riling themselves up in a vacuum. They’ve been fed a steady diet of misinformation, bullshit fraud claims, and a victim narrative from right-wing media and Trump himself.”

Michigan Gov. Gretchen Whitmer (D) denounced as shocking and reckless a call from a Trump administration official for Michigan residents to “rise up” over new coronavirus restrictions she announced Sunday, the Detroit Free Press reports.

Trump coronavirus adviser Scott Atlas urged Michiganders to “rise up” against the new restrictions. He later sought to clarify on Twitter he was not trying to incite violence.

In defiance of Oregon Gov. Kate Brown’s (D) orders, one of Clackamas County’s top elected officials plans to host a large dinner in her home on Thanksgiving despite the raging COVID-19 pandemic, the Oregonian reports.

Said Tootie Smith (R): “My family will celebrate Thanksgiving dinner with as many family and friends as I can find. Gov Brown is WRONG to order otherwise.”

Some quotes from former President Barack Obama from this interview:

“What I think is indisputable is that I signified a shift in power. Just my mere presence worried folks, in some cases explicitly, in some cases subconsciously. And then there were folks around to exploit that and tap into that.”

“I will say that I’m not surprised that somebody like Trump could get traction in our political life. But if we were going to have a right-wing populist in this country, I would have expected somebody a little more appealing… I guess I would not have expected someone who has complete disdain for ordinary people to be able to get attention and then the following from those very same people.”

“There’s a notion that a man is true to his word, that he takes responsibility, that he doesn’t complain, that he isn’t a bully—in fact he defends the vulnerable against bullies.” He added: “And so even if you are someone who is annoyed by wokeness and political correctness and wants men to be men again and is tired about everyone complaining about the patriarchy, I thought that the model wouldn’t be Richie Rich—the complaining, lying, doesn’t-take-responsibility-for-anything type of figure.”

Sen. Lamar Alexander (R-TN) said he “would not support the nomination of Judy Shelton to the Federal Reserve’s board of governors, narrowing the path for the controversial economist’s confirmation in the final months of the Trump presidency,” the Washington Post reports.

“Alexander joins Sens. Susan Collins (R-Maine) and Sen. Mitt Romney (R-Utah), who said they would vote ‘no’ over the summer.”

Politico: “Top on the to-do list for lawmakers is avoiding a government shutdown, as current funding runs dry on Dec. 11. Both sides want to pass an omnibus spending bill, as opposed to punting on the issue with another continuing resolution.”

Also: “It would be hard for lawmakers to leave town for the holidays without providing some much-needed relief for the American people. Democrats want to clear the decks for the incoming Biden administration, while Republicans think they’ll get a better deal with Trump still in the White House.”

“Yet a relief deal has remained elusive. Dems are still calling for trillions of dollars in new spending, while the GOP is still insistent on a targeted measure of around $500 billion. And Speaker Nancy Pelosi and Senate Majority Leader Mitch McConnell have yet to hold any new talks on an aid package.”

“The Trump administration has called for oil and gas firms to pick spots where they want to drill in Alaska’s Arctic National Wildlife Refuge as it races to open the pristine wilderness to development and lock in drilling rights before President-elect Joe Biden takes office,” the Washington Post reports.

“The ‘call for nominations’ to be published Tuesday allows companies to identify tracts to bid on during an upcoming lease sale on the refuge’s nearly 1.6-million-acre coastal plain, a sale that the Interior Department aims to hold before Biden takes the oath of office in January. The move would be a capstone of President Trump’s efforts to open up public lands to logging, mining and grazing — something Biden strongly opposes.”

President Trump’s national security adviser Robert O’Brien promised a “very professional” transition to the administration of President-elect Joe Biden in an interview broadcast Monday, even as Trump continues to falsely claim he won the November election, the AP reports.

Said O’Brien: “Look, if the Biden-Harris ticket is determined to be the winner — and obviously things look that way now — we’ll have a very professional transition from the National Security Council.”

After saying he would step in if President-elect Joe Biden still wasn’t receiving detailed intelligence briefings Friday, Sen. James Lankford (R-OK) told Newsmax TV that his comments had been blown out of proportion.

Said Lankford: “I’m not in a hurry, necessarily, to get Joe Biden these briefings, it’s been interesting how the media, the national media, not this network, but others have twisted this term ‘step in.’ I happen to chair the committee that oversees GSA, that is the entity that has to be able to make this call.”

“Emily Murphy, head of the GSA, recently sent that message to an associate inquiring about employment opportunities in 2021, a move that some in Washington interpreted as at least tacitly acknowledging that the current administration soon will be gone.”

Frank Bruni: “Just five short years ago Jared and Ivanka were dinner-party royalty here in Manhattan. It’s that kind of place. They had money, they had youth, they had celebrity. They were thin. I’m told that their manners were impeccable, so you’d never know that his father was an actual felon and her father a de facto one. Besides, you can’t hold family against someone, can you? We don’t choose how we’re born.”

“But from then on, we do make choices, and we’re accountable for those.”

“Jared and Ivanka are about to be held accountable.”

“Joe Biden plans to fill his White House with economic advisers more progressive than he is, but they may be blocked from their most aggressive fiscal moves if Republicans maintain control of the Senate,” Axios reports.

“If the GOP keeps these progressives from winning a massive stimulus, they may be graded on a different curve: simply persuading Congress to spend more money, and relying on regulatory changes to advance Biden’s broader agenda.”

“President Trump’s defeat will make it a lot easier for Democrats to finally get his tax returns, and some prominent lawmakers plan to keep the heat on the incoming Biden administration and House leaders to deliver,” Politico reports.

“Once Biden controls the Treasury Department, his administration could simply hand over the long-sought records to its allies in Congress, who have been fighting in court to force Trump to turn them over, so far unsuccessfully.”

Jill Lepore: “Hardly a day passes that Trump does not attempt to suppress evidence, as if all the world were in violation of an N.D.A. never to speak ill of him. He has sought to discredit publications and broadcasts that question him, investigations that expose him, crowds that protest him, polls that fail to favor him, and, down to the bitter end, ballots cast against him.”

“None of this bodes well for the historical record and for the scheduled transfer of materials from the White House to the National Archives, on January 20, 2021. That morning, even as President-elect Joseph R. Biden, Jr., is ascending the steps of the Capitol, staffers from the archives will presumably be in the White House, unlocking doors, opening desks, packing boxes, and removing hard drives. What might be missing, that day, from file drawers and computer servers at 1600 Pennsylvania Avenue is difficult to say.”

“But records that were never kept, were later destroyed, or are being destroyed right now chronicle the day-to-day doings of one of the most consequential Presidencies in American history and might well include evidence of crimes, violations of the Constitution, and human-rights abuses. It took a very long time to establish rules governing the fate of Presidential records. Trump does not mind breaking rules and, in the course of a long life, has regularly done so with impunity. The Presidential Records Act isn’t easily enforceable. The Trump Presidency nearly destroyed the United States. Will what went on in the darker corners of his White House ever be known?”