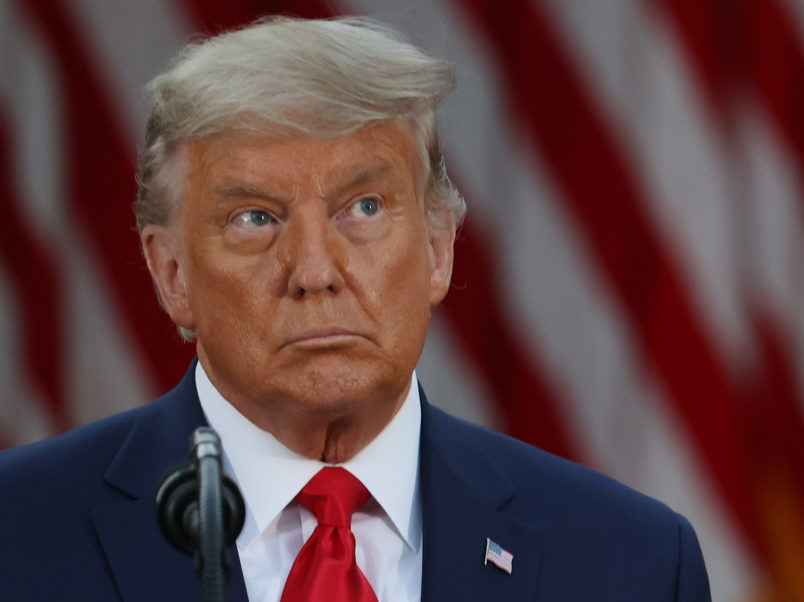 President Trump has not attended a coronavirus task force meeting in “at least five months,” the Washington Post reports.

“The president is no longer regularly briefed on the pandemic by his team of doctors, and he rarely reads the daily virus reports prepared by Birx… The reports have grown increasingly grim in recent weeks, aides said, but are largely ignored in the West Wing.”

President Trump in a tweet said President-elect Biden won the election  while continuing to spread unsubstantiated conspiracy theories about a rigged election.

Said Trump: “He won because the Election was Rigged. NO VOTE WATCHERS OR OBSERVERS allowed, vote tabulated by a Radical Left privately owned company, Dominion, with a bad reputation & bum equipment that couldn’t even qualify for Texas (which I won by a lot!), the Fake & Silent Media, & more!”

But soon after, Trump tweeted: “I concede NOTHING! We have a long way to go. This was a RIGGED ELECTION!”

Daily Beast: “Neither the hedge fund billionaire nor his daughter commented to the Journal on why, but both have financed many of the highest-profile ultra-conservative causes of recent years like Cambridge Analytica, Breitbart News, and Donald Trump’s presidential campaign. The app has grown to 10 million users thanks in large part to conservatives chafing against other social networks’ content moderation policies, which, among other things, prohibit false claims that the election was stolen.”

New York Times: “Georgia’s runoffs, the vestige of segregationist efforts to dilute Black voting power, will determine control of the Senate in races to be decided on Jan. 5. In the past, such contests have heavily favored Republicans because of a drop-off among Democratic voters, particularly African-Americans, after the general election.”

“But those intimately involved in the two previous Senate showdowns say what happened before is not necessarily predictive of the future. Demographic and cultural change has led to rapid shifts in the state, and Democrats have made concerted efforts to energize and turn out their voters, work that paved the way for President-elect Joe Biden’s strong showing in the state.”

Pew Research: “Looking across the 12 battleground states from the upper Midwest (where many polls missed the mark) to the Sun Belt and Southwest (where many were stronger), polls overestimated the Democratic advantage by an average of about 4 percentage points. When looking at national polls, the Democratic overstatement will end up being similar, about 4 points, depending on the final vote count. That means state polling errors are about the same as in 2016, while the national polling error is slightly larger, at least as of today.”

“The fact that the polling errors were not random, and that they almost uniformly involved underestimates of Republican rather than Democratic performance, points to a systematic cause or set of causes. At this early point in the post-election period, the theories about what went wrong fall roughly into four categories, each of which has different ramifications for the polling industry.”

Dan Balz: “President-elect Joe Biden took back three northern states — Pennsylvania, Michigan and Wisconsin — that President Trump carried in 2016. He also scored important breakthroughs in the Sunbelt with victories in Georgia and Arizona. Meanwhile, Trump established more secure beachheads for the GOP in Ohio and Iowa, and he again dashed Democrats’ hopes of winning Florida and North Carolina.”

“The new map gives Biden 306 electoral votes, exactly the number that Trump earned in his surprise victory four years ago. Some of the changes are certainly a function of underlying trends in the nation’s politics, changing demographics and shifting allegiances of suburban or white working-class voters. But they are also a function of Trump’s norm-busting presidency. How big the Trump factor has been will have to await the 2024 campaign or beyond.”

Washington Post: “Georgia’s Jan. 5 runoffs will decide whether Perdue and Loeffler return to Washington, and whether the Senate has a slim Republican majority or a 50-50 split. President Trump’s refusal to concede the presidential race has, for now, added some confusion to the GOP’s message.”

“Democrats tell their audiences that victory would give Vice President-elect Kamala D. Harris a tie-breaking Senate vote, unlocking the party’s agenda. Republicans warn that there’d be no stopping the Democrats if the Senate seats are lost. But so long as Trump remains unwilling to concede, they’re unwilling to explain exactly why.”

“America’s two major parties had hoped the 2020 presidential election would render a decisive judgment on the country’s political trajectory. But after a race that broke records for voter turnout and campaign spending, neither Democrats nor Republicans have achieved a dominant upper hand,” the New York Times reports.

“Instead, the election delivered a split decision, ousting President Trump but narrowing the Democratic majority in the House and perhaps preserving the Republican majority in the Senate. As Joseph R. Biden Jr. prepares to take office and preside over a closely divided government, leaders in both camps are acknowledging that voters seem to have issued not a mandate for the left or the right but a muddled plea to move on from Trump-style chaos.”

“When President Trump leaves the White House in January, he will face some of the deepest financial and legal challenges in his family business empire in decades,” the Wall Street Journal reports.

“No matter what he focuses on after the presidency, the businesses will require his attention. Two New York investigations will continue after he leaves office and the Trump Organization will need to avert a potential cash crunch caused by looming debt maturities at the firm’s real estate holdings. Personal guarantees Mr. Trump made on some of the organization’s debt add urgency to shoring up its financial position.”

New York Times: “After spending election week in Delaware, she has returned to the two-bedroom Washington condominium she bought after she was elected to the Senate in 2016. From there, she is in regular touch with Mr. Biden, by text message or telephone, according to aides with the Biden-Harris transition team, and with other transition officials…”

“One focus of her time is the quantum leap Ms. Harris is soon to make from the legislative to the executive branch. Whereas Mr. Biden will have virtually no learning curve upon returning to the White House after eight years as vice president, Ms. Harris has spent little, if any, substantive time at 1600 Pennsylvania Avenue.”

“For now, Ms. Harris remains a senator. It is unclear when she might relinquish her seat. Mr. Obama stepped down from his Senate seat days after his 2008 election, but Mr. Biden, ever the sentimentalist, hung on to his until shortly before he was sworn in as vice president the following January, telling friends he wanted to take one last oath of office for the seat he had held for decades.”

“President-elect Joe Biden campaigned on a transformational liberal policy platform, calling for ‘revolutionary institutional changes’ and $7 trillion of new spending to remake the American economy as he styled himself a modern-day FDR,” the Washington Post reports.

“Yet Biden’s decisive electoral college victory — he won the national popular vote by more than 5 million and flipped five states — came with no coattails down ballot that would help him push through his ambitious plans. Instead, the country appears to have rejected both President Trump and the idea of Democratic control, with the liberal policy overhaul it would have brought — forcing a rapid recalibration by Biden of what remains possible.”

Politico: “The eight-week sprint to the Jan. 5 runoffs comes amid the backdrop of rapidly rising Covid-19 infections, along with the start of Biden’s transition — even as Republicans defend President Donald Trump’s efforts to undermine and fight the results of the election. Both sides agree on one thing: Georgia is about to determine the shape of American politics for at least the next two years. But they diverge sharply on how that prospect motivates voters.”