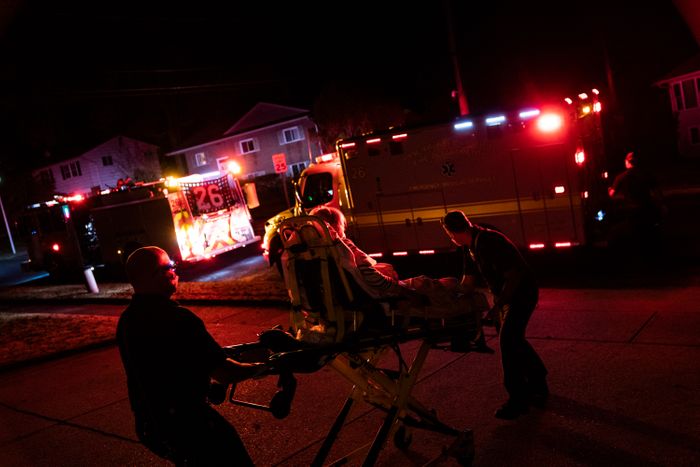 Washington Post: “A week after the election was called for Joe Biden, thousands of President Trump’s supporters gathered in the nation’s capital Saturday to falsely claim that the race had been stolen from the man they adore — who soon decided to welcome them in person.”

“Shortly after 10 a.m., Trump drove down Pennsylvania Avenue in his motorcade, greeting hundreds of cheering protesters — nearly all of them without masks — who ran to the side of Freedom Plaza to catch a glimpse. The president, who has refused to concede or allow a formal transition to begin, smiled and waved from a car window as people filled the street to follow behind him.”

Then he went to golf.

President-elect Joe Biden demanded that President Trump do more to confront the coronavirus infections exploding across the country, calling the federal response “woefully lacking” even as Mr. Trump broke a 10-day silence on the pandemic to threaten to withhold a vaccine from New York, the New York Times reports.

Said Biden in a blistering statement: “I will not be president until next year. The crisis does not respect dates on the calendar, it is accelerating right now. Urgent action is needed today, now, by the current administration — starting with an acknowledgment of how serious the current situation is.”

A new Ohio State University poll finds nearly 40% of U.S. residents plan to participate in gatherings of 10 or more people this holiday season despite concerns over the spread of COVID-19.

In addition, one-third of respondents said they wouldn’t ask attendees at holiday parties with family or friends to wear masks, and just over 25% indicated that they wouldn’t practice social distancing.

New York Times: “For weeks, as coronavirus cases spiked across the United States, deaths rose far more slowly, staying significantly lower than in the early, deadliest weeks of the nation’s outbreak in the spring. New treatments, many hoped, might slow a new wave of funerals.”

“But now, signs are shifting: More than 1,000 Americans are dying of the coronavirus every day on average, a 50 percent increase in the last month. Iowa, Minnesota, New Mexico, Tennessee and Wisconsin have recorded more deaths over the last seven days than in any other week of the pandemic. Twice this past week, there have been more than 1,400 deaths reported in a single day.”

“President-elect Joe Biden is expected to take a historic step and select a woman to head the Pentagon for the first time, shattering one of the few remaining barriers to women in the department and the presidential Cabinet,” the AP reports.

“Michele Flournoy, a politically moderate Pentagon veteran, is regarded by U.S. officials and political insiders as a top choice for the position.”

“Republican leaders in four critical states won by President-elect Joe Biden say they won’t participate in a legally dubious scheme to flip their state’s electors to vote for President Trump. Their comments effectively shut down a half-baked plot some Republicans floated as a last chance to keep Trump in the White House,” the AP reports.

“State GOP lawmakers in Arizona, Michigan, Pennsylvania and Wisconsin have all said they would not intervene in the selection of electors, who ultimately cast the votes that secure a candidate’s victory. Such a move would violate state law and a vote of the people.”

David Boies and Ted Olson represented the opposing sides in Bush v. Gore in 2000 and have written a Washington Post op-ed:

“We still don’t agree about how the Supreme Court ruled, but we completely agree that nothing in that case — or in the Supreme Court’s decision — supports the challenges now being thrown about in an attempt to undermine President-elect Joe Biden’s victory.”

“Yet, over the past week, we have heard repeated assertions that the outcome of this election is somehow in doubt, as it was in 2000.”

“It is not. Biden will be president. There are many areas of policy on which we disagree. But no matter how you voted in this election, that is the clear outcome. The nation’s laws and shared values dictate that Americans now unite to support democracy, national security, the public trust in institutions and the urgent work of the next administration.”

Said Kelly: “The president, with all due respect, does not have to concede. But it’s about the nation. It hurts our national security because the people who should be getting up to speed, it’s not a process where you go from zero to 1,000 miles per hour.”

Associated Press: “A sitting American president is, for the first time, trying to convince the people that they should not believe the numbers that clearly demonstrate his rival’s win. Rather, Trump is making baseless claims of massive fraud, demanding recounts and calling for audits in an effort to discredit the outcome and, in the process, put democracy itself on trial.”

“It’s possible that the mercurial president is one tweet away from a change of heart, but so far that is not the case. And the sweeping majority of his fellow Republicans are allowing him to play this out.”

“President Trump’s senior campaign aides were gathered in their headquarters Saturday morning when word emerged that Rudy Giuliani would be holding a news conference in the parking lot of a Philadelphia landscaping business. They knew that meant trouble,” Politico reports.

“Senior campaign aides scurried to urge organizers to kill the event, infamously staged at the wrong ‘Four Seasons’ — a landscaping business adjacent to an adult bookstore and a crematorium. But Giuliani plowed ahead anyway, delivering a conspiracy-filled rant that undercut the legal strategy the president’s advisers had meticulously mapped out in the run-up to the election.”

“Campaign officials described the episode as disastrous, saying it scared off many of the lawyers they spent months recruiting, who now no longer wanted to be involved.”

Fox Business host Lou Dobbs took his regular propagandistic praise of President Trump to an even higher level as he declared the projected win of President-elect Joe Biden an attempt to “take over the country and deny this president what is rightfully his, a second term,” the HuffPost reports.

Said Dobbs: “What I’d like to know is what in the hell is the Republican Party doing to defend and to, I mean, why not just say we’re not going to accept the results of this election? It’s outrageous.”

President Trump has tapped Rudy Giuliani to oversee any new post-election litigation, which has “has distressed top campaign officials and other advisers, who worry Giuliani’s Hail Mary ploys will damage Trump’s reputation and potentially harm his future political aspirations,” Politicoreports.

“Giuliani’s promotion also threatens to complicate a legal apparatus that has been in the works since June. The campaign began assembling a team of lawyers in swing states and counties where recounts might take place. The effort has been overseen by Citizens United President David Bossie, who was tapped because of his conservative street cred and connections to pro-Trump activists around the country.”

Politico: “Supreme Court Justice Samuel Alito delivered an unusually inflammatory public speech Thursday night, starkly warning about the threats he contends religious believers face from advocates for gay and abortion rights, as well as public officials responding to the coronavirus pandemic. Speaking to a virtual conference of conservative lawyers, the George W. Bush appointee made no direct comment on the recent election, the political crisis relating to President Donald Trump’s refusal to acknowledge his defeat or litigation on the issue pending at the Supreme Court.”

“However, Alito didn’t hold back on other controversial subjects, even suggesting that the pressure Christians face surrounding their religious beliefs is akin to the strictures the U.S. placed on Germany and Japan after World War II.”

Associated Press: “Joe Biden faces a decision unlike any other incoming president: whether to back a short-term national lockdown to finally arrest a raging pandemic. For now, it’s a question the president-elect would prefer to avoid. In the week since he defeated President Donald Trump, Biden has devoted most of his public remarks to encouraging Americans to wear a mask and view the coronavirus as a threat that has no regard for political ideology.”

“But the debate has been livelier among members of the coronavirus advisory board Biden announced this week. One member, Dr. Michael Osterholm, suggested a four- to six-week lockdown with financial aid for Americans whose livelihoods would be affected. He later walked back his remarks and was rebutted by two other members of the panel who said a widespread lockdown shouldn’t be under consideration.”

“President-elect Joe Biden’s return to ‘normalcy’ will include restoring the daily press briefing — and at least two women are under consideration to lead the new post-Trump show,” Politico reports.

“Kate Bedingfield is seen as having the inside track to become either White House communications director or press secretary. Symone Sanders could be offered the role of incoming press secretary, or slot into another position before winding up ‘at the podium’ down the line, Biden aides and other people in and around the transition said.

A federal judge said Chad Wolf was not legally serving as acting Homeland Security secretary when he signed rules limiting DACA applications and renewals, and those rules are now invalid, CNN reports.

Barack Obama writes in his new memoir that Senate Majority Leader Mitch McConnell has “discipline, shrewdness and shamelessness — all of which he employed in the single-minded and dispassionate pursuit of power,” the HuffPost reports.

And former Alaska Gov. Sarah Palin had “no idea what the hell she was talking about.”

But perhaps his most damning assessment of all was reserved for Sen. Lindsey Graham who Obama compares to a character in a spy movie “who double-crosses everyone to save his own skin.”

“It was as if my very presence in the White House had triggered a deep-seated panic, a sense that the natural order had been disrupted. Which is exactly what Donald Trump understood when he started peddling assertions that I had not been born in the United States and was thus an illegitimate president. For millions of Americans spooked by a Black man in the White House, he promised an elixir for their racial anxiety.” — Barack Obama, quoted by CNN, from his new memoir, A Promised Land.