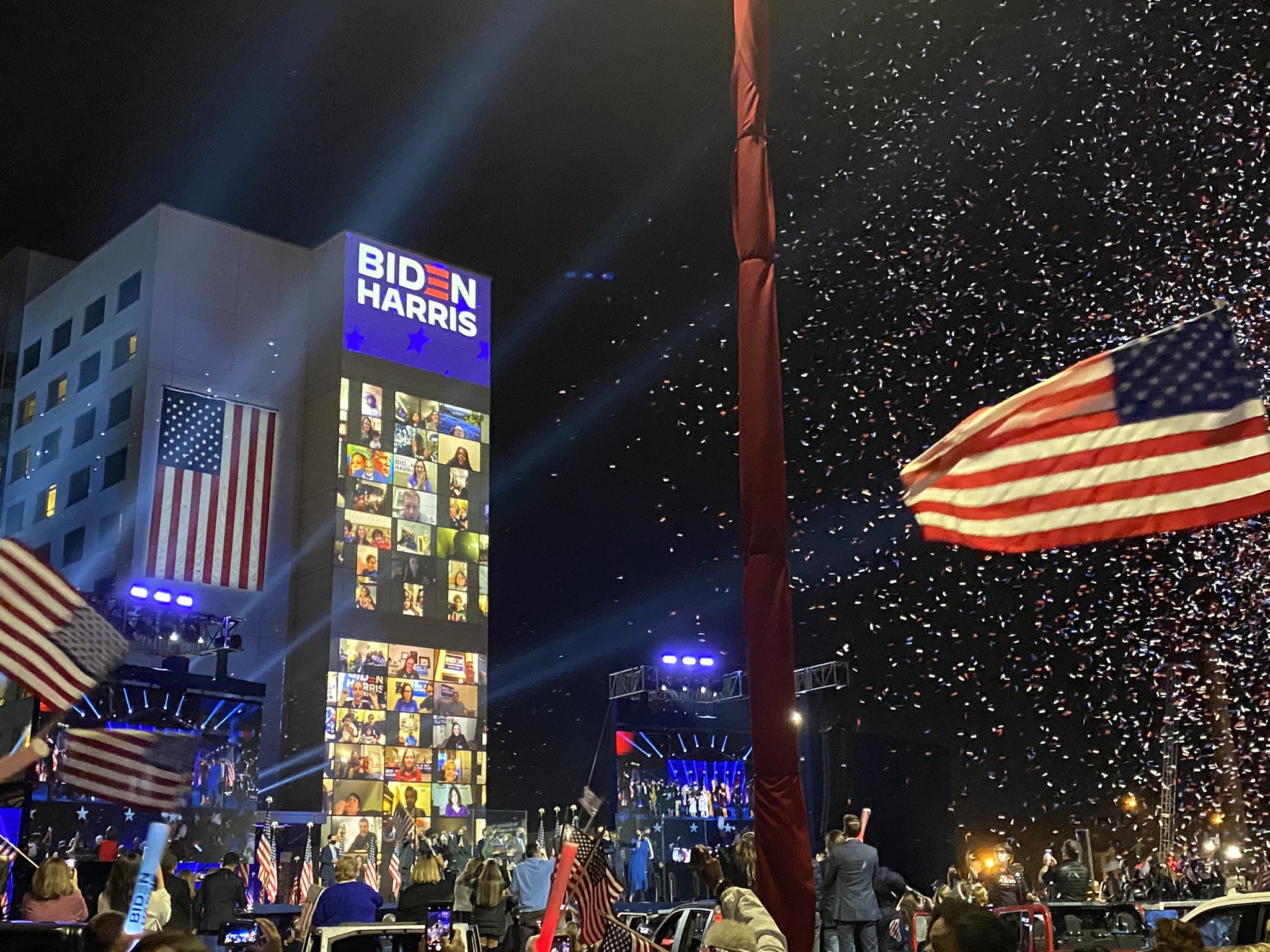 TRUMP LASHES OUT AT “MEDICAL DEEP STATE” AND FOX NEWS. “President Trump is lashing out at the Food and Drug Administration following a disclosure Monday that an experimental coronavirus vaccine from pharmaceutical giant Pfizer is more than 90 percent effective, convinced the timing — six days after Election Day — proves the ‘medical deep state’ deliberately tried to sabotage his electoral prospects by delaying the results,” the Washington Post reports.

President Trump unleashed on Fox News, retweeting a dozen messages attacking the network and tweeting that Fox “forgot the Golden Goose” that made them successful. He added: “The biggest difference between the 2016 Election, and 2020, was Fox News!”

SO DOES DON YOUNG. Rep. Don Young (R-AK), the longest-serving member of the House of Representatives and is 87 years old, announced he has tested positive for coronavirus.

YOU CAN’T SAY THE NAME “BIDEN” IN THE WHITE HOUSE. National security adviser Robert O’Brien has also “emerged as one of Trump’s biggest enablers at a decisive moment,” the Daily Beast reports. “Asked if officials in the White House feel comfortable saying Biden’s name in the West Wing, one senior White House official said, half-jokingly, ‘Sure, you can say his name. If you’re talking about who lost the election to the president.’”

Said another national security official: “If you even mention Biden’s name … that’s a no-go, you’d be fired. Everyone is scared of even talking about the chance of working with the transition.”

TRUMP CHILDREN AT ODDS. CNN: “Differing approaches have emerged amongst the Trump siblings: Donald Trump Jr. and Eric Trump are telling their father to aggressively fight to the end, echoing baseless claims that the election has been rigged and the outcome should change. Ivanka Trump and her husband, Jared Kushner, meanwhile, are weighing a different political calculus.”

“Ivanka Trump has offered a more calibrated message to her father, asking him whether it was worth damaging his legacy and potentially his businesses to continue his refusal to concede.”

The New York Times has speculation about who is being considered for each major post in the Biden administration.

BIDEN PLANS TO UP THE FIGHT AGAINST CLIMATE CHANGE. “Biden is poised to embed action on climate change across the breadth of the federal government, from the departments of Agriculture to Treasury to State — expanding it beyond environmental agencies to speed U.S. efforts to mitigate global warming and to acknowledge that the problem touches many aspects of American life,” the Washington Post reports.

“The far-reaching strategy is aimed at making significant cuts in greenhouse gas emissions even without congressional action, by maximizing executive authority.”

THE CALM JOE BIDEN. “Joe Biden’s campaign strategy just crashed into Washington’s alternate reality. In his public appearances and statements since media outlets confirmed his victory on Saturday, the president-elect has kept the temperature low and offered reassurances that the transfer of power will proceed as dictated by law, even as President Donald Trump and fellow Republicans attempt to use the federal bureaucracy to stall his ascension to the White House,” Politico reports.

“It’s a familiar strategy Biden’s team has employed throughout the general election: follow the rules, model the behavior of a typical president and reject Trump’s attempts to draw the narrative into fantasyland. On Tuesday, Biden showed that he wouldn’t be lured into debating Trump’s version of reality, working to settle the nerves of jittery supporters who are alarmed by what they are hearing out of Republicans.”

COVID SOARS. Washington Post: “The number of new daily coronavirus cases in the United States jumped from 104,000 a week earlier to more than 145,000 on Wednesday, an all-time high. Nearly every metric is trending in the wrong direction, prompting states to add new restrictions and hospitals to prepare for a potentially dark future.”

FASCIST POMPEO TO VISIT WEST BANK AND GOLAN HEIGHTS. “Secretary of State Mike Pompeo is planning to visit the Golan Heights and an Israeli settlement in the West Bank next week, both firsts for a U.S. secretary of state,” Axios reports.

“Since 1967, all previous U.S. administrations have treated the West Bank and Golan Heights as occupied territory.”

“The trip seems intended to highlight the Trump administration’s policy shifts on Israel. For Pompeo, it also has domestic political significance ahead of a possible presidential run in 2024.”

ACOSTA USED “POOR JUDGMENT IN EPSTEIN PLEA DEAL. “A Department of Justice review found that Alex Acosta, President Trump’s former Labor Secretary, exercised poor judgment when he was a US attorney in Florida and agreed to a nonprosecution agreement with sex trafficker Jeffrey Epstein, but the review did not find that Acosta or other prosecutors engaged in professional misconduct,” CNN reports.

“The move late last year by Rosen, an appointee of President Trump, angered some career prosecutors in the Justice Department’s Public Integrity Section and has delayed for months the release of an Interior Department Office of Inspector General report about Zinke’s conduct.”

TRUMPERS FLOCK TO NEWSMAX. “President Trump’s fans who don’t think Fox News is right-wing enough have another option on cable and satellite: Newsmax TV,” CNN reports. “And something dramatic has happened in the past week: A big audience has sought out Newsmax TV for the first time.”

“On Newsmax, voter fraud innuendo is everywhere. Conspiracy theory chatter is constant. And perhaps most importantly, Joe Biden is not the president-elect. The channel is tapping into a real vein of rage on the right. And Trump is encouraging it by retweeting Twitter users who are trashing Fox and promoting Newsmax.”

TRUMP PLANS DIGITAL COMPETITOR TO FOX. President Trump has told friends he wants to start a digital media company to clobber Fox News and undermine the conservative-friendly network, sources tell Axios. Said a source: “He plans to wreck Fox. No doubt about it.”

“Trump’s digital offering would likely charge a monthly fee to MAGA fans. Many are Fox News viewers, and he’d aim to replace the network — and the $5.99-a-month Fox Nation streaming service, which has an 85% conversation rate from free trials to paid subscribers — as their top destination.”

MCCARTHY EMBRACES TERROR GROUP. House Minority Leader Kevin McCarthy (R-CA) defended two Republican congresswomen-elect who support the far-right QAnon conspiracy theory. Said McCarthy: “Give them an opportunity before you claim what you believe they have done, and what they will do.”

ADELSON SENDS TRUMP A MESSAGE. The Las Vegas-Review Journal, which is owned by billionaire Trump backer Sheldon Adelson, has this editorial today:

“It is too fitting that the Trump presidency concludes amid a babel of bluster and bravado. But the president does a disservice to his more rabid supporters by insisting that he would have won the Nov. 3 election absent voter fraud. That’s simply false.”

“There is no evidence that fraud cost Mr. Trump the election, no matter how much the president tweets the opposite and his supporters wish it so.”

CHAIT SAYS WE CAN ENTICE REPUBLICANS WITH TAX CUTS. HE IS WRONG. Jonathan Chait: “The Democrats won the presidency, but they don’t have what a parliamentary system would call a ‘government.’ Even if they win both Georgia Senate seats in the runoffs, they’ll have just 50 Senate seats and will need to rely on moderates to supply the deciding votes, with little prospect for ending the filibuster and no margin for error. If Joe Biden is to pass any major legislation, he needs to lure Republicans who have neither an ideological incentive to support any progressive reforms nor an ideological incentive to help him succeed.”

“There’s just one big lure Biden can offer for their votes: tax cuts for the rich. It’s a price he should be willing to pay.”

Republicans don’t care about policy. Any policy. Even policy they like. They care about two things: power for themselves and making liberals cry. That’s all. What Biden has to do is just negotiate with some non-evil Republicans like Mitt Romney, Ben Sasse, Lisa Murkowski and Susan Collins (and you can rotate some others in depending on the issue). Ignore the rest.

NYC MAY CLOSE SCHOOLS AGAIN. New York Times: “The move — which is now regarded by some City Hall officials as a question of when, not if — would be perhaps the most significant setback yet for the city’s recovery since the bleak days of spring, when it was a global center of the pandemic and all the schools were shuttered.”

TRUMP PROBES TO CONTINUE. GOOD. There will be no free passes this time like we did in 2009. “Donald Trump will be a private citizen in January. But Republicans and Democrats on Capitol Hill are poised to carry on the investigations and legal battles that helped define his presidency. In the House, Democrats are still in court fighting to obtain Trump’s financial records and testimony from his first White House counsel Don McGahn, a key figure in the obstruction of justice case against Trump,” Politico reports.

“In the Senate, where GOP control hinges on two Jan. 5 runoffs in Georgia, Republican lawmakers are plotting ways to expand and intensify their investigations targeting the former Obama administration and President-elect Joe Biden and his son Hunter, with Senate Republicans saying they will use the lame duck period to ramp up their probes.”

MEADOWS PLOTS LAME DUCK MOVES. “On Monday, White House chief of staff Mark Meadows gathered senior aides on a call. One of his goals: to plot the conservative policy moves they could push through in their final 10 weeks on immigration, trade, health care, China and school choice,” Politico reports.

DOES BANNON ACTUALLY HAVE TO KILL SOMEONE, MARK? Facebook CEO Mark Zuckerberg “told an all-staff meeting on Thursday that former Trump White House adviser Steve Bannon had not violated enough of the company’s policies to justify his suspension,” Reuters reports.

“Bannon suggested in a video last week that FBI Director Christopher Wray and government infectious diseases expert Anthony Fauci should be beheaded, saying they had been disloyal to President Trump, who last week lost his re-election bid.”

TRUMP STACKS INTEL AGENCIES WITH LOYALISTS. “There is no evidence so far that these new appointees harbor a secret agenda on Iran or have taken up their posts with an action plan in hand. But their sudden appearance has been a purge of the Pentagon’s top civilian hierarchy without recent precedent,” Politico reports.

“Administration officials said the appointments were partly about Afghanistan, where the president has been frustrated by what he sees as a military moving too slowly to fulfill his promise that all American troops will be home by Christmas.”