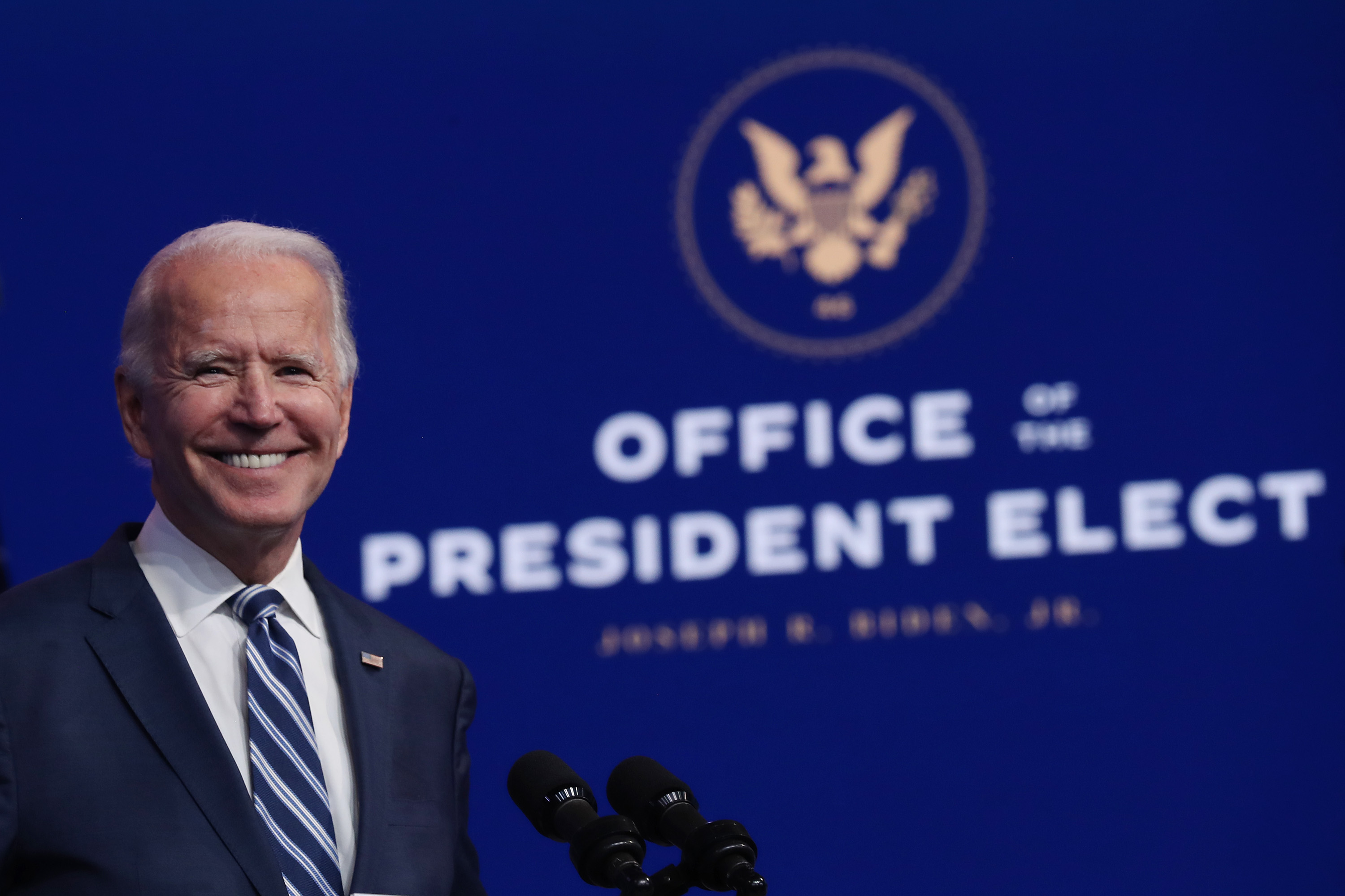 President-elect Joe Biden downplayed President Trump’s refusal to concede the election: “I’m confident that the fact they’re not willing to acknowledge we won at this point is not of much consequence in our planning and what we’re able to do.”

Asked what he thought of Trump’s refusal so far to concede, Biden said: “I think it’s an embarrassment.”

Valeria Biden Owens told Axios that her brother, Joe Biden, is “never going to see Donald Trump again.” Said Owens: “Donald Trump is going off the stage and on January 20 that’s history, that’s past. Joe’s not gonna talk about Donald Trump. Who cares?”

Leaders at agencies across the federal government have been instructed not to cooperate with Joe Biden’s transition team until President Trump finally accepts that he’s lost the election, the Washington Post reports. “Officials at agencies across the government who had prepared briefing books and carved out office space for the incoming Biden team to use as soon as this week were told instead that the transition would not be recognized until the Democrat’s election was confirmed by the General Services Administration, the low-profile agency that officially starts the transition.”

Joe Biden’s transition team is warning that it may take “legal action” if the General Services Administration fails to make an official determination that Joe Biden has won the election, Axios reports.

Washington Post: “Only a smattering of Republican senators have acknowledged Biden’s victory, and there has been little coaxing on the part of senior GOP lawmakers to help Trump come to terms with his loss. Some said there is value in ensuring the integrity of this year’s results, while others described a chaotic and scattershot operation that they hoped would eventually push Trump to cooperate in a peaceful transfer of power.”

Said one senior Republican official: “What is the downside for humoring him for this little bit of time? No one seriously thinks the results will change. He went golfing this weekend. It’s not like he’s plotting how to prevent Joe Biden from taking power on 20 January. He’s tweeting about filing some lawsuits, those lawsuits will fail, then he’ll tweet some more about how the election was stolen, and then he’ll leave.”

“The Affordable Care Act seems likely to withstand its third challenge at the Supreme Court,” CNBC reports. “Several of the court’s conservatives on Tuesday expressed an unwillingness to strike down the landmark legislation during oral arguments in a case brought by red states seeking to eliminate the law.”

Sen. Amy Klobuchar (D-MN) is being floated for a Cabinet post inside President-elect Joe Biden’s administration, CNBC reports. Klobuchar is being considered by Biden and his team for a number of positions, including attorney general and secretary of Agriculture.

GQ has a good nugget at the end of a must-read profile of Sen. Doug Jones (D-AL), who lost his re-election bid last week: “According to a Democratic source, on Saturday, after Biden was announced as the next president of the United States, the Biden transition team made contact with Jones.”

“A Pennsylvania postal worker whose claims have been cited by top Republicans as potential evidence of widespread voting irregularities admitted to U.S. Postal Service investigators that he fabricated the allegations,” the Washington Post reports.

“As Donald Trump refuses to concede the election over unfounded allegations of voter fraud, defeated Republicans further down the ballot are finding his claims to be a convenient way to save face after their own losses,” the Daily Beast  reports.

“President Trump’s tweets questioning the U.S. election’s legitimacy are effective in shaping his supporters’ beliefs on that topic, while his tweets boosted his detractors’ confidence in elections, according to a study believed to be the first to estimate the effect of the president’s posts about voting,” the Wall Street Journal reports.

President Trump and his top allies pressured Sens. Kelly Loeffler (R-GA) and David Perdue (R-GA) to denounce Georgia Secretary of State Brad Raffensperger (R) “lest he tweet a negative word about them and risk divorcing them from his base ahead of the consequential runoff,” the Atlanta Journal Constitution reports.

“And shortly after, Trump and some of his inner circle started tweeting attacks at Raffensperger, who was already unpopular with many in the Georgia GOP base long before Tuesday’s vote.”

“Mr. Barr’s directive ignored the Justice Department’s longstanding policies intended to keep law enforcement from affecting the outcome of an election. And it followed a move weeks before the election in which the department lifted a prohibition on voter fraud investigations before an election.”

“Mr. Barr’s directive ignored the Justice Department’s longstanding policies intended to keep law enforcement from affecting the outcome of an election. And it followed a move weeks before the election in which the department lifted a prohibition on voter fraud investigations before an election.”

“The Pentagon’s acting policy chief resigned on Tuesday after falling out of favor with the White House, raising fears of a post-election purge at the Defense Department,” Politico reports.

“The departure of James Anderson, the acting undersecretary of defense for policy, potentially paves the way for Anthony Tata, President Trump’s controversial nominee for the top policy job who was pulled from consideration due to Islamophobic tweets, to take over the policy shop.”

James Hohmann: “Perhaps as consequential as President Trump firingDefense Secretary Mark Esper via tweet on Monday, which has been widely expected for months, was the hiring of Michael Ellis to be the National Security Agency’s general counsel.”

“As one of the most controversial staffers in the White House over the past four years, Ellis has shown himself to be as much a staunch Trump loyalist as anyone else in the administration. But his new job means that he will no longer be a political appointee. Instead, as a civilian member of the senior executive service, he gets protections that will make it quite difficult for President-elect Joe Biden to fire him.”

“Burrowing down into what Trump derides as “the deep state” will give Ellis, a former Republican campaign operative, a powerful platform from which he could seek to complicate or undermine the incoming Democratic administration’s agenda. This is a preview of the sort of behavior from Trump that many on Biden’s transition team expect, and fear, during the lame-duck president’s final 71 days in power, even as he refuses to concede defeat.”

Ezra Klein: “The Trump administration’s current strategy is to go to court to try and get votes for Biden ruled illegitimate, and that strategy explicitly rests on Trump’s appointees honoring a debt the administration, at least, believes they owe. One of his legal advisers said, ‘We’re waiting for the United States Supreme Court — of which the President has nominated three justices — to step in and do something. And hopefully Amy Coney Barrett will come through.’”

“If that fails, and it will, Mark Levin, one of the nation’s most popular conservative radio hosts, is explicitly calling on Republican legislatures to reject the election results and seat Donald Trump as president anyway. After Twitter tagged the tweet as contested, Trump’s press secretary weighed in furiously on Levin’s behalf.”

“That this coup probably will not work — that it is being carried out farcically, erratically, ineffectively — does not mean it is not happening, or that it will not have consequences. Millions will believe Trump, will see the election as stolen.”

South Dakota Gov. Kristi Noem (R) has enthusiastically taken up President Trump’s efforts to contest the results of the presidential election, asking for online donations to “help us bring it home for the president,” but it appears the donations are set to flow into her own reelection account, NBC News reports.

Brookings: “The stark economic rift that Brookings Metro documented after Donald Trump’s shocking 2016 victory has grown even wider. In 2016, we wrote that the 2,584 counties that Trump won generated just 36% of the country’s economic output, whereas the 472 counties Hillary Clinton carried equated to almost two-thirds of the nation’s aggregate economy.”

“A similar analysis for last week’s election shows these trends continuing, albeit with a different political outcome. This time, Biden’s winning base in 477 counties encompasses fully 70% of America’s economic activity, while Trump’s losing base of 2,497 counties represents just 29% of the economy. (Votes are still outstanding in 110 mostly low-output counties, and this piece will be updated as new data is reported.)”

“President Trump’s election loss and the week-long silence of ‘Q,’ the movement’s mysterious prophet, have wrenched some QAnon believers into a crisis of faith, with factions voicing unease about their future or rallying others to stay calm and ‘trust the plan.’ The uncertainty has been compounded by the abrupt public resignation, also last Tuesday, of Ron Watkins, the administrator of Q’s online sanctuary on the message board 8kun,” the Washington Post reports.

“Q has gone quiet before. But the abrupt lack of posts since last Tuesday — Election Day, which the anonymous figure had touted for months as a key moment of reckoning — has sparked speculation and alarm among the movement’s most ardent followers. Some QAnon proponents have begun to publicly grapple with reality and question whether the conspiracy theory is a hoax.”

“Surveys from Pew Research Center have found ‘ideological silos’ now common on both the left and right, and ‘consistently’ conservative and liberal Americans are more likely than ideologically mixed Americans to say it is important to them to live in a place where most people share their political views,” the Wall Street Journal reports.

“In 2016, voters in … landslide counties accounted for 30% of all votes nationwide, up from about 4% in 1980. It was the first time that number surpassed the share of votes cast in closely contested counties (those within five points of the national vote). In 2020, the share from landslide counties grew to 35%.”

Washington Post: “Two Latino politicians have emerged as top contenders for the post to be vacated by Vice President-elect Kamala Harris, who became the first woman of color to win a U.S. Senate seat here in 2016. A selection process has just begun to balance this state’s peculiar demands of history, geography and race that will shape Newsom’s decision, which may not come until the new year.”

“But the characteristics surrounding this choice, and what political analysts, advisers and others say will be important to Newsom, suggest that at this early stage California Attorney General Xavier Becerra (D) and Secretary of State Alex Padilla (D) are the leading candidates. Among their other attributes is one that analysts and political advisers here say is important to Newsom: Past success in statewide political contests.”