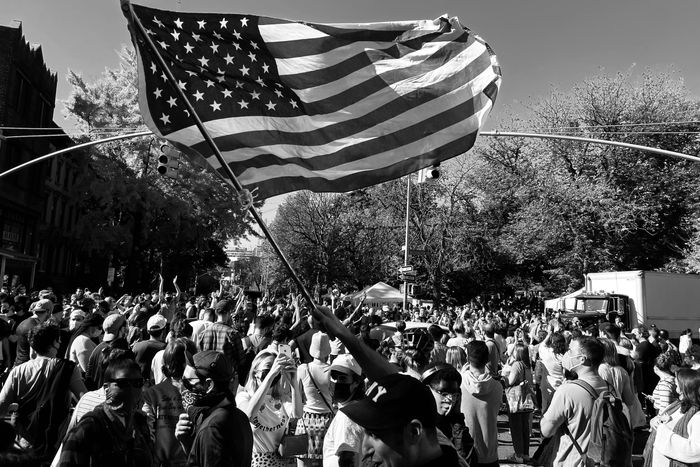 President-elect Joe Biden urged the country “to lower the temperature” in his victory speech on Saturday night, but Republican leaders he’ll have to work with in Congress have either urged President Trump to not concede or stayed silent despite no widespread evidence of fraud in the election, CNN reports.

But, “recognition is growing in Donald Trump’s inner circle that efforts to overturn Joe Biden’s victory will be futile, though some advisers have urged the president to pursue focused legal challenges,” Bloomberg reports.

“Trump has given no indication he’s preparing to concede. His closest aide, son-in-law and senior adviser Jared Kushner, has recommended the president ask courts to ensure transparency around ongoing counts of ballots in several contested states.”

Sen. Lindsey Graham (R-S.C.) warned that President Trump should not concede defeat in the 2020 presidential election in part because Republicans will “never” be able to elect another president from their party again, The Hill reports.

Said Graham: “If Republicans don’t challenge and change the U.S. election system, there will never be another Republican president elected again. President Trump should not concede. We’re down to less — 10,000 votes in Georgia. He’s going to win North Carolina. We have gone from 93,000 votes to less than 20,000 votes in Arizona, where more — more votes to be counted.”

“Apart from a few die-hards, most people close to President Trump know the race is over — but no one wants to be the sacrificial lamb who tells him to concede,” Axios reports.

“President Trump plans to brandish obituaries of people who supposedly voted but are dead — plus hold campaign-style rallies — in an effort to prolong his fight against apparent insurmountable election results,” Axios reports.

“Doug Collins, the outgoing congressman who lost to Sen. Kelly Loeffler in a special election to fill former Sen. Johnny Isakson’s seat, will be leading the campaign’s recount efforts.”

George W. Bush released a statement: “I just talked to the President-elect of the United States, Joe Biden. I extended my warm congratulations and thanked him for the patriotic message he delivered last night. I also called Kamala Harris to congratulate her on her historic election to the vice presidency. Though we have political differences, I know Joe Biden to be a good man, who has won his opportunity to lead and unify our country. The President-elect reiterated that while he ran as a Democrat, he will govern for all Americans.”

“President Vladimir Putin, unlike his Western European counterparts, who quickly posted congratulations on Saturday, had not issued a statement on President-elect Joe Biden even as night fell in Moscow on Sunday. Four years earlier, the Kremlin rushed out a message for President Trump within hours of the American television networks calling the race on election night,” the New York Times reports.

“The early signs indicate that Mr. Putin is preparing for a deeply adversarial relationship with America’s next president. While Mr. Trump never delivered on Russian hopes of rapprochement between Washington and Moscow, his America-first foreign policy dovetailed with the Kremlin’s desire to weaken the Western alliance and to expand Russian influence around the world.”

“The Saudi government has been one of the Trump administration’s closest allies in the world, with White House adviser Jared Kushner sharing a personal friendship with MBS.”

Said Netanyahu: “Joe, we’ve had a long & warm personal relationship for nearly 40 years, and I know you as a great friend of Israel. I look forward to working with both of you to further strengthen the special alliance between the U.S. and Israel.”

The Philadelphia Inquirer has my favorite story of this entire election cycle:

“What began five years ago with the made-for-TV announcement of Donald Trump’s presidential ambitions from the escalator of his ritzy Manhattan high-rise, ended Saturday with his aging lawyer shouting conspiracy theories and vowing lawsuits in a Northeast Philadelphia parking lot, near a sex shop and a crematorium.”

“In hindsight, the hastily arranged news conference featuring Rudy Giuliani, the president’s personal lawyer, just minutes after Joe Biden had been declared the victor of the 2020 race, delivered a fitting end to a campaign that had been at times characterized by its slapdash techniques.”

Tim Murtaugh, communications director for President Trump’s re-election campaign, posted a fake front page purporting to be from a 2000 issue of the Washington Times that read “President Gore” all over the campaign’s headquarters — calling it a “reminder that the media doesn’t select the president,” Axios reports.

One problem: The Washington Times says the headline never ran in the newspaper.

“One near-certainty about Joe Biden’s Cabinet: Pete Buttigieg will be in it. Biden officials have made clear to donors and party officials the question surrounding Buttigieg is not if, but where, he lands,” Axios reports.

“The multilingual Buttigieg has told friends he wants U.S. ambassador to the United Nations, but he may face internal competition from Julie Smith, a longtime Biden foreign policy confidant.”

“Other slots for Buttigieg range from Housing and Urban Development to Veterans Affairs to the Office of Management and Budget.”

“The Republican Party has seen George Wallace’s racist movement, Perot’s movement and a tea party movement, and they all faded when they lacked a leader or had a diminished leader. Is Trump going to be distracted and just throw rocks at the window? Will he be busy dealing with litigation he might face out of office? To keep something going, you need discipline.” — GOP consultant Ed Rollins, quoted by the Washington Post, on the future of Trumpism.

Jonathan Bernstein: “Still counting the votes. But here’s the good news: In the midst of a pandemic, harsh partisan polarization, the biggest turnout in more than a century (in percentage terms) or ever (in raw numbers), and persistent hostility from the president, the U.S. has pulled off what certainly appears to be a well-run, free and fair election.”

“Kudos to all the state and local officials who appear to have done an excellent job, and to the thousands of men and women who served as poll workers and who counted (or are still counting) the votes. More than 48 hours after the polls closed, I don’t think I’ve heard a single serious complaint about election administration against either Democratic or Republican elected officials. Yes, I’m aware of the evidence-free accusations from President Trump and his allies, but those are actually signs that things have been well-run: If Trump had evidence of real problems or misconduct, he’d be parading it in front of the cameras — and, more important, in front of judges. That hasn’t happened.”

“If Joe Biden manages to hold his slim lead in Georgia, he has one person to thank above all others, according to many Democrats and local officials: Stacey Abrams,” the New York Times reports.

“Ms. Abrams, a former minority leader of the Georgia House, has spent nearly a decade reconstituting the multiracial coalition for voting rights that sparked the 1960s civil rights movement and pushing a state once dominated by white conservatives into a more diverse era.”

“Never before has a president-elect inherited a complex set of urgent — and epic — emergencies like the ones confronting Joe Biden and America,” Axios reports.

“FDR, no doubt, inherited a hot American, Depression-era mess in 1932. President-elect Biden’s spoils, in some respects, are similarly rotten: a spreading pandemic, sky-high long-term unemployment, stratospheric federal debt, an outgoing president claiming the Democrat stole the election, a nation bitterly divided, and misinformation and lies spreading at scale on platforms available to every citizen for free.”

“Any one of these crises would take a presidential term to tame. Six, at once, seem almost incomprehensible in their scale and complexity.”

“When Trump leaves office next year, he will return to a business that is facing significant financial and legal difficulties,” the Washington Postreports.

“Trump is facing more than $400 million in loan payments in the next four years. Some of the loans are on properties — including Trump’s Doral resort in Miami and his hotel in Washington — that are already losing money, according to reporting in the New York Times. After he leaves office, Trump could lose some of his power to direct government spending to his properties.”