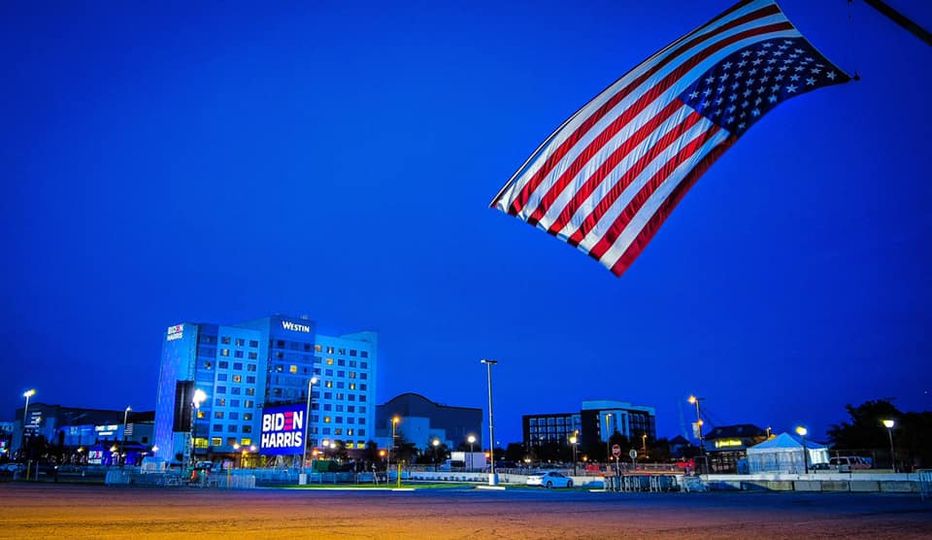 “As Day 4 of the United States election turned into Day 5 on Saturday, the race for president appeared to slow to a crawl,” the New York Times reports.

“Saturday morning could yet bring decisive news: Pennsylvania could move out of recount territory if the margin widens, and Arizona and Nevada were expected to declare new votes. But whereas 24 hours earlier, all-night ballot counting had given Joseph R. Biden Jr. the lead in Georgia, the early hours of Saturday seemed comparatively sedate. Nothing was changing, and nobody was quite sure when it would.”

“Joe Biden has nearly insurmountable math on his side, as the stunningly close count continued all day,” Axios reports. “NBC’s Chuck Todd gave a window into decision-desk thinking when he said on the extended Today show, just before 11 a.m., that the network had over 90% confidence Biden would win Pennsylvania — but needed to be at 99.5%.”

Politico: “Truth is, it’s not just the certainty of projecting any one state that’s causing newsrooms across the country pause right now. It’s the fact that calling any of them will — at least by the Associated Press and Fox counts — put Biden at 270 or beyond. No network wants to be forced to retract a call.”

Washington Post: “Some close to the president are advocating that, if Biden is declared the winner of the presidential election, Trump will ultimately offer public remarks in which he commits to a peaceful transition of power… One senior campaign aide, however, said there had been no discussion of a concession speech.”

“Trump is unlikely to ever concede in the traditional sense, allies said — giving the sort of gracious, magnanimous speech the nation has come to expect at the end of even the most hard-fought presidential contests. If he loses, these people added, they expect Trump to continue to baselessly claim, as he has done for several days now, that the election was stolen.”

Maggie Haberman: “People close to the president question whether he will invite Biden to the WH before inauguration. Or if he’ll go to the inauguration himself. He does not care about the norms of the office.”

“But no one I have talked to thinks he will refuse to leave.”

Jake Sherman: “For all the talk in GOP circles about the genius in the president’s political orbit, dumping on mail-in and absentee balloting for months will go down as one of the dumbest political decisions of all time.”

The Biden campaign responds to reports that President Trump won’t concede: “As we said on July 19th, the American people will decide this election. And the United States government is perfectly capable of escorting trespassers out of the White House.”

The FAA has declared the air space over Joe Biden’s home a no-fly zone.

President Trump is starting to acknowledge to advisers he may not be able to pull out a come from behind victory, CNN reports. A source described Trump as sounding more “realistic” as returns show Joe Biden’s leads increasing in key states. The Trump team now believes that without wins in Georgia and Arizona it would be difficult to mount legal challenges in Pennsylvania. Courts will not want to hear challenges if Trump lacks viable path to 270 electoral votes.

Philadelphia mayor Jim Kenney (D) said that Donald Trump needs to “put his big boy pants on, he needs to acknowledge the fact that he lost, and he needs to congratulate the winner,” The Hill reports.

Sources close to the White House tell CNN that some senior officials inside the White House and the campaign are beginning to quietly back away from Trump, in acts of self-preservation, as the returns in Pennsylvania and Georgia indicate the President will not win reelection.  Said one key administration official: “It’s over.” When asked what Trump might do next, the official said: “God. Who knows?”

Wall Street Journal: “Some advisers have privately said they see little path forward, politically or legally, that would prevent Mr. Trump from becoming the first president to lose reelection since 1992.”

“Among the president’s advisers, finger-pointing over the campaign’s legal strategy has intensified in recent days, White House and campaign aides said. Aides have expressed acute frustration over what many see as a slapdash legal effort, complaining that—even though Mr. Trump spent months telegraphing his intent to fight the election outcome in the courts—there wasn’t enough planning ahead of Election Day and has been little follow-through on decisions made this week. For days after the election, advisers said they didn’t know who was in charge of the strategy.”

“President Trump’s bellicose pledge to fight the outcome of the election in the courts crashed on Friday into skeptical judges, daunting Electoral College math and a lack of evidence for his claims of fraud,” the New York Times reports.

“None of the dozen or so lawsuits they had brought in battleground states appeared to be gaining any traction in the courts. And in any case, none seemed likely to give Mr. Trump the edge he would need in vote counts in the states that will determine the outcome.”

White House chief of staff Mark Meadows has tested positive for the novel coronavirus, Bloomberg reports. Meadows informed a close circle of advisers just after the election. Meadows told others not to disclose his condition, the Washington Post reports. “On Election Day, Meadows visited the Trump campaign headquarters in Arlington, where he was photographed not wearing a mask.”

“Meadows was also among those in the East Room of the White House when Trump gave remarks around 3 a.m. Wednesday to a crowd of about 150 of his top aides, donors and allies, as well as family members. During that event, Meadows worked the room extensively, without a mask, speaking to dozens. He stood near Trump campaign adviser Corey Lewandowski, one of the few people there who was wearing a mask.”

Fox News host Laura Ingraham prepared her viewers for the reality that Donald Trump was about to lose the presidential race.

Said Ingraham: “If and when it’s time to accept an unfavorable outcome in this election, and we hope it never comes President Trump needs to do it with the same grace and composure that he demonstrated at that town hall with Savannah Guthrie.”

She added: “Losing, especially when you believe the process wasn’t fair, it’s a gut punch. And I’m not conceding anything tonight, by the way, but losing, if that’s what happens, it’s awful. But President Trump’s legacy will only become more significant if he focuses on moving the country forward.”

“It’s difficult to see the long-term winning strategy behind these lawsuits. To mix metaphors, it looks like throwing the kitchen sink at the wall and see what sticks.”

— Republican elections attorney Ben Ginsberg, quoted by Axios, on the Trump campaign’s lawsuits over the election.

Sen. David Perdue (R-GA) and challenger Jon Ossoff (D) will head to a runoff race after neither candidate received 50 percent of the vote, Edison Research projects, the Washington Post reports.

“Georgia election rules require a candidate to get to 50 percent to win outright.”

In the special election for the state’s other Senate seat, a runoff will pit Raphael Warnock (D) against Sen. Kelly Loeffler (R), who was appointed to the seat.

“Democrats have not traditionally performed well in runoffs in the state, and the top of the ticket will not be on the ballot in January to help turn out voters for down-ballot races.”

Joe Biden advisers “accelerated their transition planning on Friday as election results showed him with an advantage in battleground states that could hand him the presidency, with the first senior officials in a potential Biden White House possibly named as early as next week,” the New York Times reports.

“Speaker Nancy Pelosi wants another two-year term running the House, cementing her role — for now — as the most powerful woman in Washington,” Politico reports.

“The 80-year-old Pelosi is coming off a disappointing Election Day, where her party lost at least five seats so far in the House, but the California Democrat intends to stay in the speaker’s chair during the 117th Congress, according to letters sent to her colleagues on Friday morning.”

The Supreme Court issued an order in the Pennsylvania case, but it’s not what the Trump campaign wanted, NBC News reports.

Justice Samuel Alito repeated the guidance from the Pennsylvania Secretary of State that post-Tuesday mail ballots must be segregated, but did not direct them to stop counting.

New from the Wall Street Journal editorial page: “Mr. Trump’s legacy will be diminished greatly if his final act is a bitter refusal to accept a legitimate defeat. Republican officials will turn away, and eventually so will the American public that wants to see the election resolved.”

“Mr. Trump hates to lose, and no doubt he will fight to the end. But if defeat comes, he will serve himself and his country best by honoring America’s democratic traditions and leaving office with dignity.”

After former Trump adviser Steve Bannon suggested that Dr. Anthony Fauci and FBI director Christopher Wray should be beheaded, Twitter responded by banning one of his accounts, the New York Times reports.

And a prominent lawyer who was defending Bannon against fraud charges in federal court in Manhattan abruptly moved to drop him as a client.

“Senior White House and Trump campaign officials are complaining bitterly about poor internal communication, blaming colleagues, pondering what jobs they might try to get next year, and lashing out at their new enemy: Fox News,” Axios reports.

“Aides told Axios they’re dreading the prospect of Fox calling Pennsylvania for Joe Biden, which could make the conservative network the first to give Biden 270 electoral votes.”

Said one administration official: “When Bush had this issue they tapped arguably the pre-eminent statesman of his generation, James Baker, to spearhead their legal and PR efforts, to great effect. … We rolled out Rudy Giuliani, Corey Lewandowski and Pam Bondi. You can draw your own conclusions.”

USA Today: “Some advisers are also skeptical that the campaign’s lawsuits will do anything to change the vote count.”

Georgia state officials said the state is headed to a recount for the presidential election as counties wrapped up counting the remainder of their absentee ballots, the Washington Post reports.

Said Secretary of State Brad Raffensperger: “Right now, Georgia remains too close to call. Out of approximately 5 million votes cast, we’ll have a margin of a few thousand. The focus for our office and for the county election officials, for now, remains on making sure that every legal vote is counted and recorded accurately. As we are closing in on a final count, we can begin to look toward our next steps. With a margin that small, there will be a recount in Georgia.”

“The Trump campaign says it will seek recounts in several key states, but that’s highly unlikely to change the outcome,” Axios reports.

“Statewide recounts have historically only changed electoral margins by an average 430 votes, according to the nonpartisan election reform group FairVote. Joe Biden’s lead in several states is thin, but it’s not that thin.”