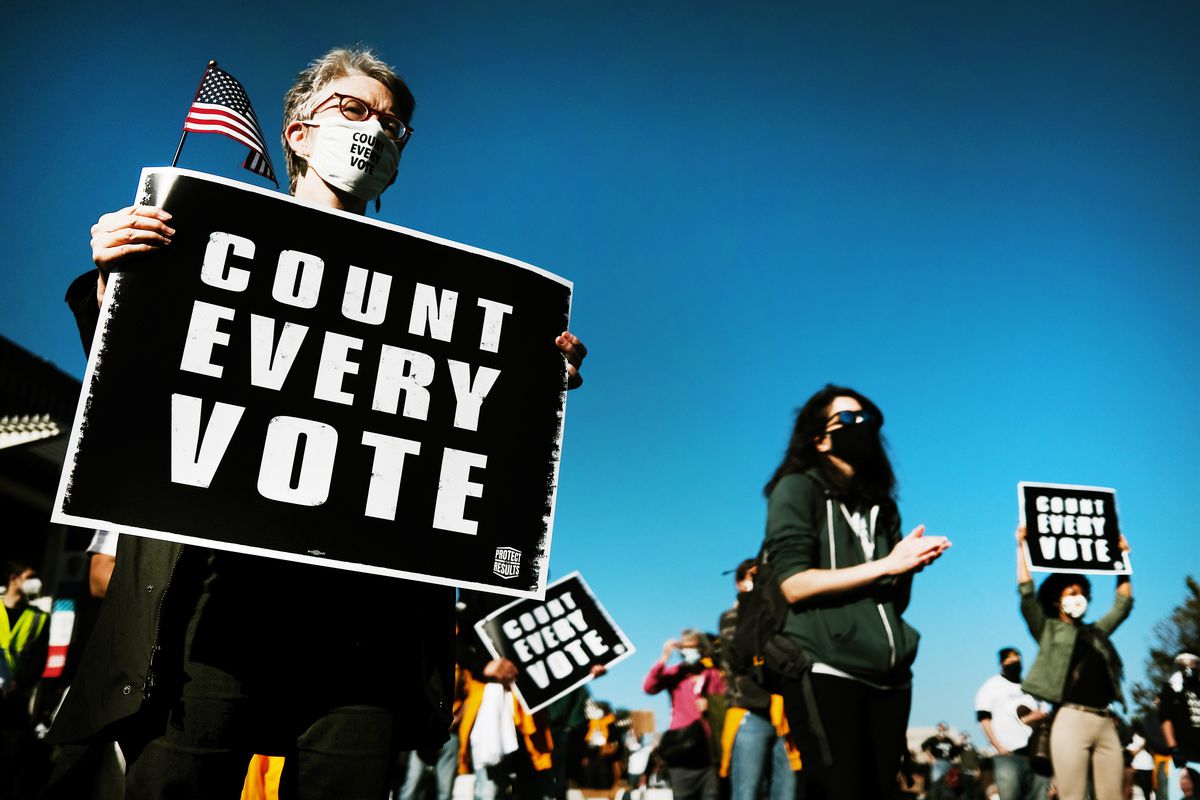 “The United States has for the first time surpassed 100,000 new coronavirus infections in a single day, as a steadily rising number of hospitalizations threatens to again overwhelm some health systems,” the Washington Post reports.

“A top White House coronavirus adviser sounded alarms Monday about a new and deadly phase in the health crisis, pleading with top administration officials for ‘much more aggressive action,’ even as President Trump continues to assure rallygoers the nation is ’rounding the turn’ on the pandemic,” the Washington Post reports.

Said Dr. Deborah Birx: “We are entering the most concerning and most deadly phase of this pandemic … leading to increasing mortality. This is not about lockdowns — It hasn’t been about lockdowns since March or April. It’s about an aggressive balanced approach that is not being implemented.”

“Senate Majority Leader Mitch McConnell said Wednesday that Congress should approve a coronavirus relief package before the end of the year, a shift from his recent suggestion that a measure was more likely early next year,” Politico reports.

“Deutsche Bank AG is looking for ways to end its relationship with President Trump after the U.S. elections, as it tires of the negative publicity stemming from the ties,” Reuters reports.

“Deutsche Bank has about $340 million in loans outstanding to the Trump Organization, the president’s umbrella group that is currently overseen by his two sons, according to filings made by Trump to the U.S. Office of Government Ethics in July and a senior source within the bank. The three loans, which are against Trump properties and start coming due in two years, are current on payments and personally guaranteed by the president.”

These are some extraordinary figures from Axios:

Ruth Marcus: “The closeness of the results underscores the alarming reality that a significant plurality of Americans supports the most disastrous, most dangerous president in our history. Biden has, wisely and appropriately, promised to govern as president for all Americans — that is, the opposite of Trump’s divisive approach. But even winning the popular vote does not erase the fact that Biden would inherit a country whose citizens are as angry and polarized as at any moment in a century and a half.”

“Biden ran pledging to restore the soul of America, but Americans do not agree about the nature of that soul. To be specific, too many do not accept the danger that Trump poses. Even if Trump turns out to have lost, there has been no resounding repudiation of Trumpism to accompany that defeat.”

New York Times: “After the Biden camp secured victories in Michigan and Wisconsin critical to its path to victory on Wednesday, attention shifted on Thursday to a handful of states where the result remained too close to call and to the courts, where the Trump campaign filed a barrage of lawsuits challenging the validity of the count.”

Dave Weigel points out one of the starkest examples of how little ticket splitting there was in this election: In Detroit, the total Trump vote was 12,654 while the total vote for U.S. Senate candidate John James (R) — a “black guy from Detroit,” as his ads put it — was just 12,734.

Washington Post: “Heading into Election Day, Democrats had hoped to pick up a half-dozen or more state legislative chambers to get a foot in the door when many state politicians get to redraw congressional maps next year, lines that will last for the next decade and help determine which party controls Congress.”

“Instead, it’s possible Democrats end up with no new chambers, and it will be Republicans who leave 2020 with wins.”

President Trump’s campaign filed a flurry of lawsuits Wednesday, asking federal and state courts to disqualify ballots in one way or another in key states like Pennsylvania, Michigan, and Georgia, the Los Angeles Timesreports.

Most experts think their prospects are dim, even with the Supreme Court dominated by conservatives.

ProPublica: “It’s easy enough for the Trump campaign to file a lawsuit claiming improprieties, but a lot harder to provide evidence of wrongdoing or a convincing legal argument.”

Politico: “Biden’s team activated teams of attorneys in Nevada, Wisconsin, Pennsylvania and Michigan in preparation for court battles, and blasted out requests for donations to combat myriad legal challenges.”

“The campaign is gearing up for an onslaught of court challenges. The campaign told donors it expected Arizona to be called for Biden Wednesday evening — the Associated Press has already done so — and Nevada on Thursday morning. They warned that vote counting in Georgia, Pennsylvania and North Carolina would take time.”

“As Wednesday wore on, Trump advisers privately acknowledged they had all but given up on Michigan and Wisconsin and were pinning their hopes in Arizona and Pennsylvania. They also said they were nervously eyeing Georgia, a state where Trump’s lead has narrowed as votes from Atlanta have come in.”

A source tells Dana Bash of CNN that President Trump is feeling “down” and “starting to see this slip away.”

Jared Kushner reached out to Rupert Murdoch after Fox News called Arizona for Joe Biden on Election Night, the New York Times reports. Trump campaign aide Jason Miller is also said to have reached out to Fox News to ask them to retract the race call.

“Republicans’ likely hold on the Senate is forcing Joe Biden’s transition team to consider limiting its prospective Cabinet nominees to those who Mitch McConnell can live with,” Axios reports.

“The new Senate political math could essentially dash the ambitions of some Democrats, including those who have clashed with Republicans.”

“Susan Rice and Stacey Abrams could be early casualties, depending on McConnell’s posture.”

George Packer: “We don’t yet know the outcome of the election, but its meaning is already clear. We are two countries, and neither of them is going to be conquered or disappear anytime soon. The outcome of the 2016 election was not a historical fluke or result of foreign subversion, but a pretty accurate reflection of the American electorate.”

“The much-discussed Democratic majority that’s been emerging since the turn of the millennium is still in a state of emergence and probably will keep on emerging for years to come. The will of the majority is indeed blocked by undemocratic rules and unscrupulous politicians, but it’s a bare majority without enough numbers to govern.”

New York Times: “At the very least, he has 76 days left in office to use his power as he sees fit and to seek revenge on some of his perceived adversaries. Angry at a defeat, he may fire or sideline a variety of senior officials who failed to carry out his wishes as he saw it, including Christopher Wray, the F.B.I. director, and Dr. Anthony Fauci, the government’s top infectious diseases specialist in the middle of a pandemic.”

“And if he is forced to vacate the White House on Jan. 20, Mr. Trump is likely to prove more resilient than expected and almost surely will remain a powerful and disruptive force in American life. He received at least four million more votes than he did in 2016 and commanded about 48 percent of the popular vote, meaning he retained the support of nearly half of the public despite four years of scandal, setbacks, impeachment and the brutal coronavirus outbreak that has killed more than 233,000 Americans.”

“When Donald Trump narrowly won Wisconsin in 2016 to clinch the presidency, he carried 23 counties that had previously voted for President Barack Obama. But when Joe Biden was projected on Wednesday to put Wisconsin back in the Democratic column, he was on track to pry back just two of them: Door and Sauk,” the Washington Post reports.

“That pattern extended to Michigan and other battleground states, with Biden building upon Democrats’ dominance in urban and suburban jurisdictions but Trump leaving most of exurban and rural America awash in red.”