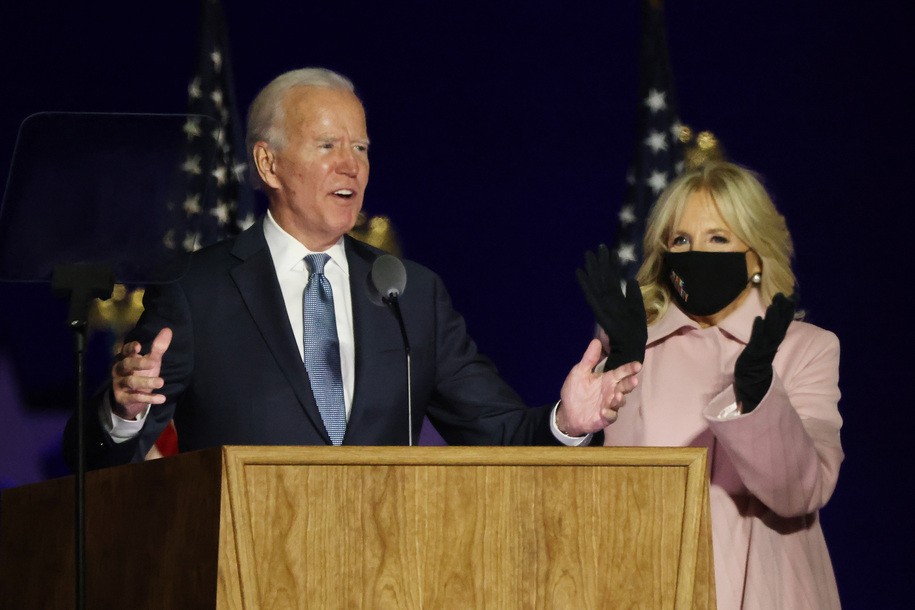 If Republicans won the White House with ~300 electoral votes (or even just with 270 like in 2000) and a 5 million popular vote margin and the most votes ever cast for a candidate in history, they sure as hell wouldn’t mope around about it. Snap out of it, everyone. That is what Joe Biden is likely to end up with.

Was the election the repudiation of all things Trump that we were hoping for? No. But we still fucking won and are going to kick his fat ass to the curb, whether he likes it or not.

Perhaps it helps to remember we are living through the present day version of reconstruction and Jim Crow. Steps toward justice (such as the Obama presidency) are always met with a backlash from those small minded people who don’t want to let go of an iota of power to give others the fresh air of freedom, justice and equality. It’s painful to see so many of our neighbors and our countrymen willingly participate in it. I could spend a lot of time being angry at the (white) people who cling to the status quo, happy for their security despite the boot on the neck of others it requires. Perhaps better to think of how many people are no longer content to keep their own security when the expense to others is so great.

But the backlash is a reaction to our progress; our progress is the history happening, slowly but surely. Painfully slowly, frustratingly slowly.

But nevertheless, we persist.

Bottom line though: once all the votes are counted, Joe Biden will have won the Presidency with over 300 electoral votes and a popular vote lead of 5 million, and he will be our next President. He will have to contend with a reduced majority in the House and a Republican Senate, but at least the primary goal of removing Donald Trump from office will have been achieved.

Politico: “This was always Donald Trump’s plan. He said it in the spring. He said it over the summer. And he hinted at it again in the early hours of Wednesday: Votes shouldn’t be counted after Election Day.”

“It didn’t matter that his assertion wasn’t — and isn’t — true. Trump portrays himself as a fighter and was always going to contest a close presidential election. After all, he spent months trying to link mail-in voting to fraud, with scant evidence — a push that seemed to coincide with predictions that post-election tallying of remote ballots could sway the vote to Joe Biden in the days after Nov. 3. He hired an army of lawyers to restrict the mail-in ballots that could be counted. They filed dozens of lawsuits.”

“Now Trump is going to activate his legal army. Speaking from the East Room of the White House shortly after 2:30 a.m. on Wednesday, he confusingly proclaimed he would ask the U.S. Supreme Court to stop ‘all voting,’ because ‘we don’t want them to find any ballots at four o’clock in the morning and add them to the list.’ It was unclear how he would do that, or what legal arguments he could muster.”

“The Trump campaign on Wednesday said it was filing a lawsuit to halt the counting of votes in Michigan until it is given access to observe the tabulation process,” The Hill reports.

Politico: “In the House, bleary-eyed Democrats were still sorting out the wreckage when they awoke Wednesday with dozens of their members’ races still uncalled and not a single GOP incumbent ousted — an outcome that virtually no one in the party had predicted in a year in which Democrats were going on the offense deep in Trump country.”

“Even with tens of thousands of ballots still to be counted, shell-shocked Democratic lawmakers, strategists and aides privately began trying to pin the blame: The unreliable polls. The GOP’s law-and-order message amid a summer of unrest. The ‘hidden Trump voters.’ The impeachment hangover. The lack of a coronavirus stimulus deal.”

David Wasserman: “District-level polling has rarely led us — or the parties and groups investing in House races — so astray. Prior to Tuesday, most Republican strategists were privately resigned to the prospect of a double-digit loss of seats. At this writing, Republicans may be on track to pick up between five and ten seats in the House, ironically about where our expectations started this cycle — but certainly not where they ended.”

“The suburban anti-Trump revolt that took 2018 by storm didn’t extend to 2020. Most Republican incumbents in white-collar suburbs didn’t just survive, they thrived — running well ahead of President Trump down-ballot. It may have helped that unlike 2018, when those voters’ only opportunity to express displeasure with Trump was in congressional races, they were able to split their tickets this year.”

Playbook: “To imagine the amount of soul searching and explaining the party will have to do after Tuesday is absolutely dizzying. The infighting will be bloody — as it should be. We fielded text after text from Hill Democrats Tuesday night and early Wednesday morning with existential questions about their leadership and the direction of their party.”

Joe Pompeo: “It was around 2:30 a.m. when all hell broke loose. That’s when President Donald Trump did the unhinged, dangerous, Democracy-destabilizing thing that we all hoped we wouldn’t have to see him do, giving a speech at the White House in which he prematurely declared victory even as millions upon millions of legitimate votes were still being counted. The goal, in all of its authoritarian bluster, was to get out in front of a result that might not land in his favor. But anyone who was still awake and glued to their screens as the propaganda unfolded got a fast and forceful reality check.”

“The networks quickly and aggressively called bullshit on Trump’s remarks, either breaking away from the speech or butting in with fact-checks.”

A new YouGov poll finds 72% of voters say taking the time to count all ballots is more important rather than rushing the outcome of the election (29%).

Nate Cohn: “President Trump leads by nearly 700,000 votes in Pennsylvania as of 5 a.m. on Wednesday, and Mr. Biden’s chances depend on whether he can win a large percentage of the more than 1.4 million absentee ballots that remain to be counted.”

“So far, Mr. Biden has won absentee voters in Pennsylvania, 78% to 21%, according to the Secretary of State’s office. The results comport with the findings of pre-election surveys and an analysis of absentee ballot requests, which all indicated that Mr. Biden held an overwhelming lead among absentee voters.”

“Turnout in this year’s hotly contested presidential election is on pace to be the highest in more than a century,” the Washington Post reports.

“Edison Research estimates more than 157 million ballots have been cast for president, which represents a 65.7 percent turnout rate among eligible voters.”

“Dawn broke over the United States on Wednesday with the presidential election undecided and the specter of hours or even days of uncertainty ahead, as several states counted millions of ballots in razor-thin contests that could tip the balance to President Trump or Joe Biden,” the New York Times reports.

“After a long election night rife with dramatic twists and victories by both candidates, Mr. Trump and Mr. Biden battled to a near draw in electoral votes, each several dozen votes shy of the 270 needed to capture the presidency.”

“The field of battle had dwindled to a trio of northern states — Pennsylvania, Michigan and Wisconsin — that vaulted Mr. Trump to victory over Hillary Clinton in 2016, as well as Arizona and Nevada, where Mr. Biden had narrow leads, and Georgia, where he trailed but was gaining ground with every vote counted. Mr. Trump prematurely declared victory and said he would petition the Supreme Court to demand a halt to the counting. Mr. Biden urged his supporters — and by implication, Mr. Trump — to show patience and allow the process to play out.”

Dan Balz: “For four years, President Trump has sought to undermine the institutions of a democratic society, but never so blatantly as in the early morning hours of Wednesday. His attempt to falsely claim victory and to subvert the election itself by calling for a halt to vote-counting represents the gravest of threats to the stability of the country.”

“Millions of votes remain to be counted, votes cast legally under the laws of the states. Until they are all counted, the outcome of the election remains in doubt. Either he or former vice president Joe Biden could win an electoral college majority, but neither has yet done so, no matter what he says. Those are the facts, for which the president shows no respect.”

“A president who respected the Constitution would let things play out.”

Jim VandeHei: “Now, whatever the resolution, close to half the country is going to feel robbed. Many of them will be angry, and will refuse to accept the winner as the legit president of all the people.”

“President Trump said he will go to the U.S. Supreme Court because he wants ‘all voting to stop,’ as he tries to hold on to early leads in key battleground states,” Bloomberg reports.

“He won’t be able to go there immediately and it’s not clear he has a legal argument that could affect the outcome of the election.”

“Cases typically work their way to the nation’s highest court after a ruling by a local judge and then other appeals courts. In 2000, it took more than a month before the Supreme Court issued the landmark Bush v. Gore ruling that ultimately decided that year’s election.”

David Graham: “Surveys badly missed the results, predicting an easy win for former Vice President Joe Biden, a Democratic pick-up in the Senate, and gains for the party in the House. Instead, the presidential election is still too close to call, Republicans seem poised to hold the Senate, and the Democratic edge in the House is likely to shrink.”

“This is a disaster for the polling industry and for media outlets and analysts that package and interpret the polls for public consumption, like FiveThirtyEight, The New York Times’ Upshot, and The Economist’s election unit. They now face serious existential questions. But the greatest problem posed by the polling crisis is not in the presidential election, where the snapshots provided by polling are ultimately measured against an actual tally of votes: As the political cliche goes, the only poll that matters is on Election Day.”

“The real catastrophe is that the failure of the polls leaves Americans with no reliable way to understand what we as a people think outside of elections—which in turn threatens our ability to make choices, or to cohere as a nation.”