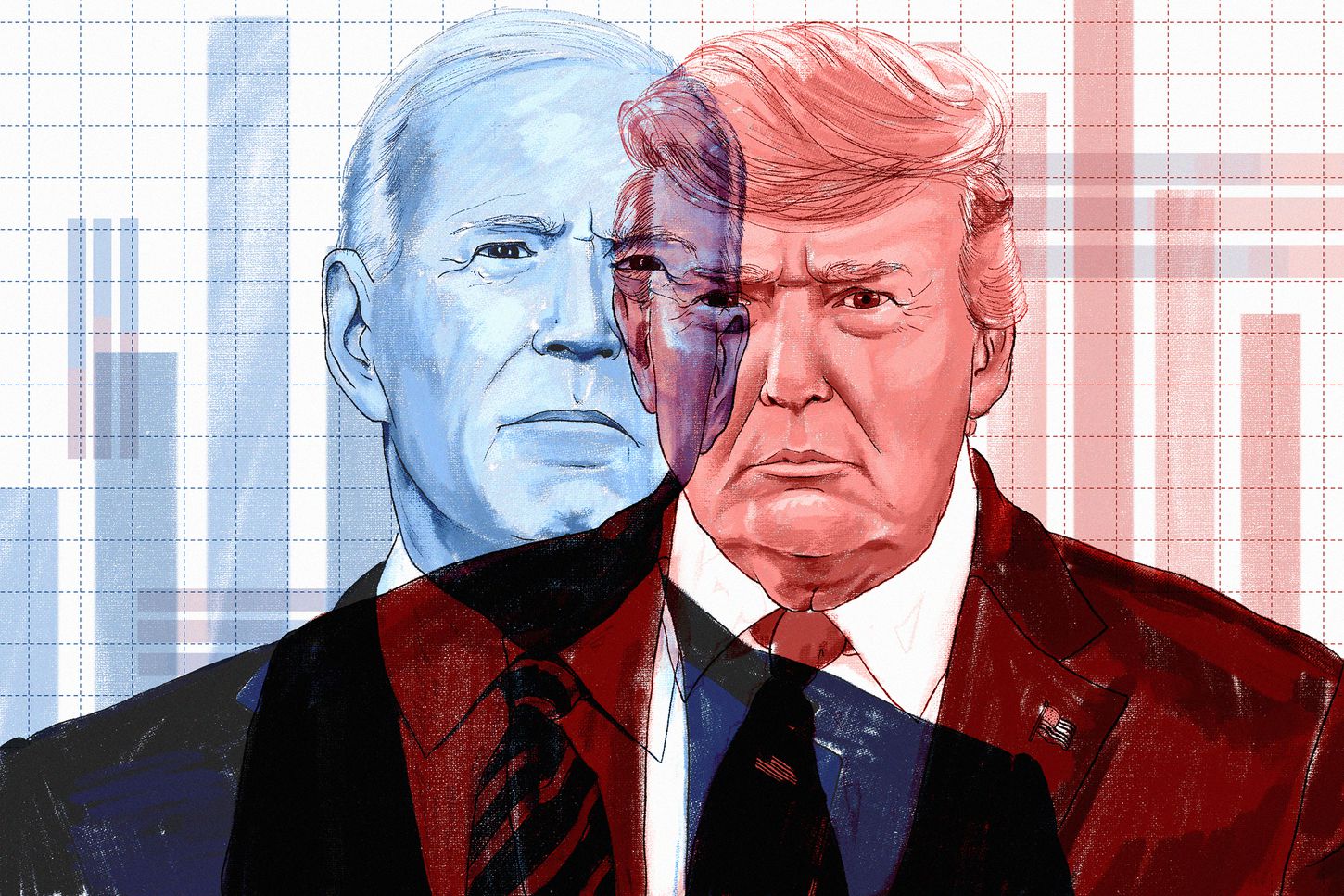 The poll confirms that the presidential race “has remained stable — despite the chaotic backdrop of an election season coinciding with a global pandemic, racial unrest, continued economic uncertainty, corruption allegations and a president infected with the coronavirus.”

Support for President Trump and Joe Biden in a group of battleground states has remained unchanged in recent days, according to a new Wall Street Journal/NBC News poll, finding little evidence of the kind of last-minute shift toward Mr. Trump that helped him win four years ago.

The poll, conducted on Sunday in 12 states in which the election is most competitive, finds Mr. Biden leading, 51% to 46%, essentially unchanged from a survey late last week. First Read has important context: Trump won these same states by a combined 2 points in 2016, 49% to 47%.

Democrats are narrow favorites to capture a Senate majority, 50 to 48 with two Toss-ups — the two Georgia races, both of which we think are likely to go to runoffs.

Democrats will net 10 seats in the House.

Cook Political Report: “We had intended our previous handicapping of the state legislatures on Oct. 28 to be our last one of the cycle. But then Texas voters came out to vote. And vote. And vote. And now, just five days later, we have one adjustment to make: We’re moving the Texas House from Lean Republican to Toss Up.”

The Cook Political Report final House outlook shows a Democratic net gain of 10 to 15 seats, with anything from 5 to 20 seats well within the range of possibility.

Henry Olsen today released his sixth biennial election prediction essay, and what he calls “perhaps the easiest” of them all.

He writes: “Former vice president Joe Biden will win comfortably unless we experience the greatest polling failure in modern history. Democrats will also gain control of the Senate and expand their majority in the House. While not the landslide that some hope for, Democrats will simultaneously control the presidency and both houses of Congress for only the third time since Ronald Reagan’s election in 1980. That alone is a historic achievement that will give them the upper hand to determine the next stage of our ongoing national crisis.”

Nate Cohn: “President Trump’s surprising victory in 2016 gave him an aura of political invincibility. But he’s in a far bigger predicament now than the one he faced heading into Election Day in 2016. The polls show Joe Biden with a far more significant lead than the one held by Hillary Clinton, and many of the likeliest explanations for the polling misfire do not appear to be in play today.”

“Over at The Upshot, I go into the ways the polls are different today than they were in 2016, and what sort of polling error Mr. Trump would need to win at this point. (A big one.)”

“Although there’s no official data, election officials across the country say that they have seen relatively few Republican poll watchers during early voting, and that at times Democratic poll watchers have outnumbered the GOP’s. In Colorado and Nevada, where the Trump campaign was particularly active in recruiting poll watchers, its efforts largely petered out.”

Jonathan Bernstein: “It’s worth keeping in mind that Trump’s bluster is generally worse than his follow-up, and that the biggest danger in what he says is often the reaction (or overreaction) that it causes.”

“President Trump arrives at Election Day on Tuesday toggling between confidence and exasperation, bravado and grievance, and marinating in frustration that he is trailing Joe Biden, whom he considers an unworthy opponent,” the New York Times reports.

“Trailing in most polls, Mr. Trump has careened through a marathon series of rallies in the last week, trying to tear down Mr. Biden and energize his supporters, but also fixated on crowd size and targeting perceived enemies like the news media and Dr. Anthony Fauci…”

“At every turn, the president has railed that the voting system is rigged against him and has threatened to sue when the election is over, in an obvious bid to undermine an electoral process strained by the coronavirus pandemic.”

New York Times: “Our three ‘needle’ battleground states will be Florida, Georgia and North Carolina, for a simple reason: These states give us the kind of data we need to offer accurate estimates of the final vote. They report the results in unmatched detail, so our estimates might even be better than usual in these states.”

“Better still, these states count their votes relatively quickly. They have experience with absentee voting, and they close their polls early in the night. Much of the vote in North Carolina and Florida is expected to be counted by 8 p.m. Eastern.”

House Speaker Nancy Pelosi (D-CA) told HuffPost in an interview that “we’re ready for it all” in the face of President Trump potentially trying to steal the election.

Said Pelosi: ““We’re ready for it all. I would just like him to know it ain’t going to happen for him at the end of the day.”

She added that the Trump campaign has essentially telegraphed its plan: “We knew that it was in their playbook… to scare people off from voting. So again, when they made it known, they made it easier for us to counter.”

Ryan Lizza: “If there is one person who is both most responsible for Georgia’s emergence as a competitive state, and most likely to benefit from a Democratic victory here, it is Stacey Abrams. The 2018 Democratic gubernatorial candidate’s near miss — she lost by 1.4 points — made Georgia the new North Carolina: a recently red Southern state undergoing dramatic demographic change that has made it competitive for the foreseeable future.”

George Condon: “Four years ago, candidate Donald J. Trump closed out his long-shot challenge with a steady and surprisingly disciplined reliance on nine words he repeated over and over again: ‘Build the wall,’ ‘Drain the swamp,’ and ‘Lock her up.’ Stemming from his remarkably effective campaign slogan, ‘Make America Great Again,’ it was the most readily digestible message since Franklin D. Roosevelt urged voters not to ‘change horses midstream.’”

“Now, President Trump is concluding his run for a second term with a broad, shotgun-style message that is diffuse, disjointed, and undisciplined. In place of the tight message of 2016, Trump has uttered in just the last seven days of his 2020 campaign almost 200,000 words and what often seemed to be just as many messages. A challenger’s stretch-run clarity and simplicity have been replaced by an incumbent’s disdain for anything that appears scripted, edited, or—most of all—short.”

“As the national early vote climbs past a staggering 93 million and challenges to the electoral process intensify across states, President Trump and Joe Biden are barreling into Pennsylvania and turning it into the top battleground in Tuesday’s election, with Democrats flooding in with door-knockers and Republicans trying to parlay Mr. Trump’s rallies into big turnout once again,” the New York Times reports.

“Both campaigns see Pennsylvania as increasingly crucial to victory: Mr. Trump now appears more competitive here than in Michigan and Wisconsin, two other key northern states he hopes to win, and Mr. Biden’s clearest electoral path to the White House runs through the state. Pennsylvania has more Electoral College votes, 20, than any other traditional battleground except Florida, and Mr. Trump won the state by less than one percentage point in 2016.”

0 comments on “The Final Campaign Report for 2020”