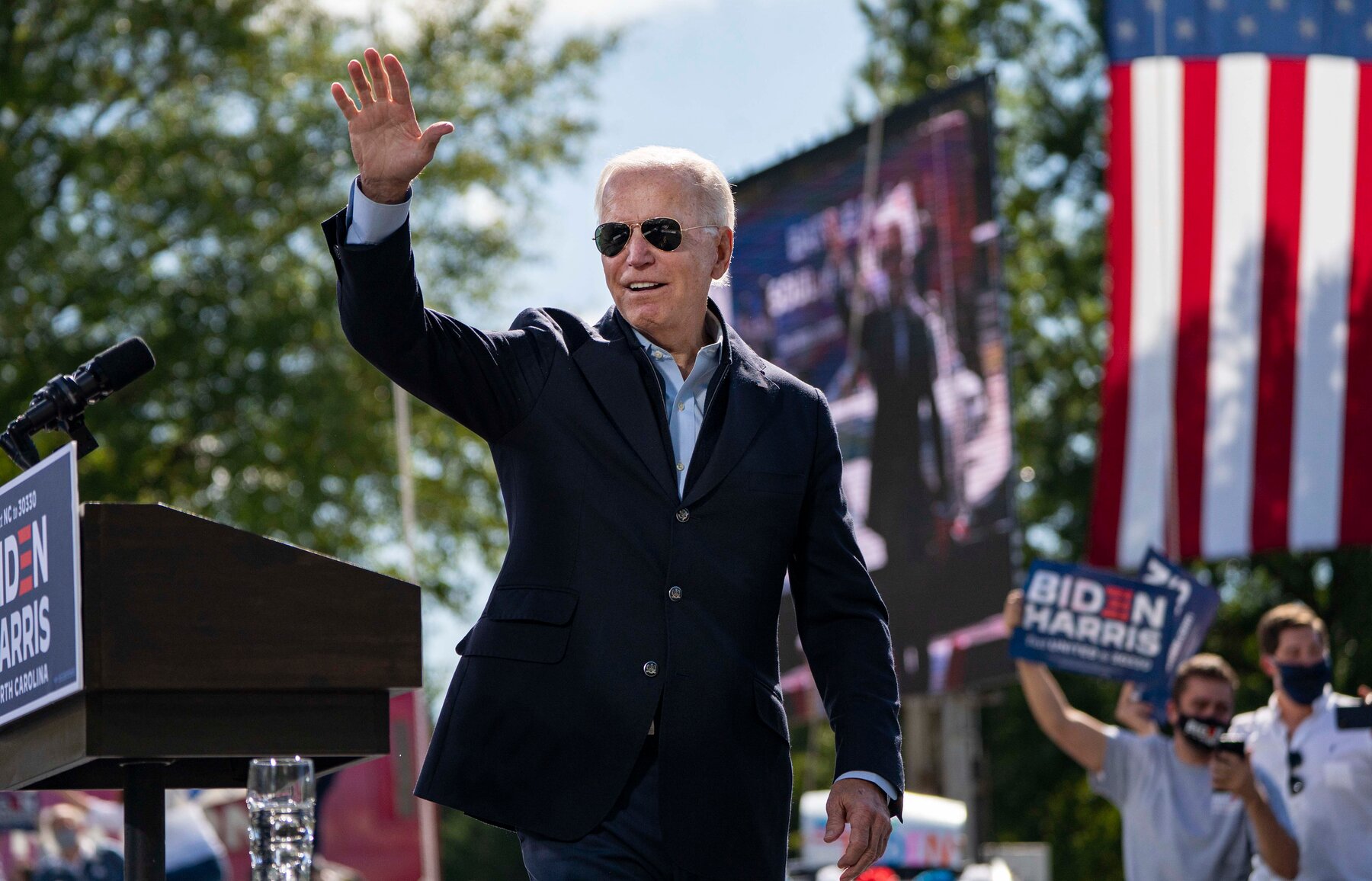 However, the survey finds the race tightening when the landscape is narrowed to a set of 12 battleground states. Biden holds a 6-point lead in those states, 51% to 45%, compared with a 10-point lead last month.

Biden’s advantage in swing states is within the poll’s margin of error and corresponds with the many swing-state surveys that show a close race and potential path for Mr. Trump to build an Electoral College majority without winning the national popular vote, as he did in 2016.

Joe Biden leads Donald Trump among Latino voters by about a 2-1 margin days before the presidential election, 62% to 29%, according to a new NBC News/Wall Street Journal/Telemundo poll.

A CBS News/YouGov poll finds Joe Biden leading Donald Trump among those who have already voted, 66% to 32%. However, Trump leads among those who plan on voting on Election Day, 69% to 27%.

Nate Silver: “There just hasn’t been any real sign that the race is tightening. If anything, Joe Biden’s margins are expanding slightly in the Upper Midwest. And there isn’t any particular reason to expect the race to tighten when more than 90 million people have already voted and the most important news story — that the United States just set a record for the number of COVID-19 cases in a day — is a negative one for Trump.”

“In fact, in many states, such as North Carolina, we’ve gotten what are likely to be the final polls of the state from most of the major polling firms. The one important exception is Pennsylvania, which some high-quality pollsters seem to have kept as the last state they’re planning to poll. And those polls could matter quite a bit. Pennsylvania is the most likely tipping-point state (it delivers the 270th electoral vote around 37 percent of the time in our forecast), so any deviation from Biden’s current 5.1-point lead in the polls there — say, if Biden climbs to a 6-point lead or falls to a 4-point lead — could make a fairly big difference in our forecast.”

“But what we’ve seen so far in Pennsylvania doesn’t suggest much movement in the polls.”

Said Dr. Anthony Fauci: “We’re in for a whole lot of hurt. It’s not a good situation. All the stars are aligned in the wrong place as you go into the fall and winter season, with people congregating at home indoors. You could not possibly be positioned more poorly.”

Fauci also noted that Joe Biden “is taking it seriously from a public health perspective” while Trump is “looking at it from a different perspective.”

“President Trump began the fall campaign rooting for, and trying to orchestrate, a last-minute surprise that would vault him ahead of Joe Biden,” the New York Times reports.

“A coronavirus vaccine. A dramatic economic rebound. A blockbuster Justice Department investigation. A grievous misstep by a rival he portrayed as faltering. A scandal involving Mr. Biden and his son Hunter.”

“But as the campaign nears an end, and with most national and battleground-state polls showing Mr. Trump struggling, the cavalry of an October surprise that helped him overtake Hillary Clinton in 2016 has not arrived.”

Washington Post: “As the president traverses thousands of miles to hold 17 rallies in eight states through Monday night, his closing message is a classic display of the kind of red meat tailored specifically to animate his most faithful supporters. Convinced that it’s too late to change the minds of voters who are not yet sold on Trump, the president’s advisers are intensely focused on turning out those who are.”

“Trump’s decision to forgo a broad, unifying closing message and instead double down on appealing to a narrow but enthusiastic slice of the electorate is a gamble. Whether it pays off or becomes a cautionary tale will not be known until the polls close Tuesday and the votes are counted.”

“The Philadelphia Convention Center will become the center of election activity in the city on Tuesday at 7 a.m., as hundreds of election officials start working to process hundreds of thousands of mail-in ballots,” ABC News reports.

“Their work in Pennsylvania’s largest city — a key Democratic stronghold — could be crucial to determining who wins the battleground state next week, and with it, the White House.”

President Trump has told confidants he’ll declare victory on Tuesday night if it looks like he’s “ahead,” Axios reports. “That’s even if the Electoral College outcome still hinges on large numbers of uncounted votes in key states like Pennsylvania.”

“Trump has privately talked through this scenario in some detail in the last few weeks, describing plans to walk up to a podium on election night and declare he has won.”

“For this to happen, his allies expect he would need to either win or have commanding leads in Ohio, Florida, North Carolina, Texas, Iowa, Arizona and Georgia.”

President Trump’s main goal is to not lose the election on Tuesday night. There’s more confirmation of this strategy in the New York Times: “Trump advisers said their best hope was if the president wins Ohio and Florida is too close to call early in the night, depriving Mr. Biden a swift victory and giving Mr. Trump the room to undermine the validity of uncounted mail-in ballots in the days after.”

“For weeks, President Trump and his allies have been laying groundwork to challenge the results of the election if he loses. Now, in the final days of the campaign, he has settled on a blatantly ahistorical closing argument: that the votes in a fair election should not be counted past election night,” the New York Times reports.

“In reality, the scenario Mr. Trump is outlining — every vote in a modern election being ‘counted, tabulated, finished’ by midnight — is not possible and never has been. No state ever reports final results on election night, and no state is legally expected to.”

The Texas Supreme Court denied a Republican-backed petition seeking to toss out more than 100,000 votes in Harris County cast in drive-thru lanes.

Texas Tribune: “The all-Republican court denied the request without an order or opinion, as justices did last month in a similar lawsuit brought by some of the same plaintiffs.” An identical case brought by the same Republicans will get an emergency hearing today.

“Powered by a favorable political climate and fundraising bonanza, Joe Biden made a late push this fall to expand the battleground map into states Donald Trump won easily in 2016,” McClatchy reports.

“But heading into Election Day, the Democratic nominee’s braintrust is remaining steadfastly focused on the same core six swing states they first identified when the general election began as their easiest path to reaching 270 electoral votes.”

Axios: “We all need to be clear-eyed about the social and political volatility heading into Election Day: The chances of sporadic violence, significant unrest or voting issues are quite high, according to basically every federal and state official monitoring voting and its aftermath in 2020.”

“Brace yourself for 78 days of drama and turmoil from Nov. 4 through the inauguration.”

“No one working for Trump or Joe Biden thinks the post-election period will be remotely normal. Even if you get the result you want, anticipate months of wild maneuvering and protests.”

“President Trump and his top aides are planning a huge overhaul of his Cabinet if he wins a second term, scuttling officials in key health-related and intelligence jobs who Trump views as disloyal, slow-acting or naysayers,” Politico reports.

“The shift would amount to a purge of any Cabinet member who has crossed the president, refused to mount investigations he has demanded, or urged him to take a different, more strict tack on the coronavirus response.”

New York Times: “Born amid made-up crowd size claims and ‘alternative facts,’ the Trump presidency has been a factory of falsehood from the start, churning out distortions, conspiracy theories and brazen lies at an assembly-line pace that has challenged fact-checkers and defied historical analogy.”

“But now, with the election just days away, the consequences of four years of fabulism are coming into focus as President Trump argues that the vote itself is inherently “rigged,” tearing at the credibility of the system. Should the contest go into extra innings through legal challenges after Tuesday, it may leave a public with little faith in the outcome — and in its own democracy.”

“The nightmarish scenario of widespread doubt and denial of the legitimacy of the election would cap a period in American history when truth itself has seemed at stake under a president who has strayed so far from the normal bounds that he creates what allies call his own reality. Even if the election ends with a clear victory or defeat for Mr. Trump, scholars and players alike say the very concept of public trust in an established set of facts necessary for the operation of a democratic society has eroded during his tenure with potentially long-term ramifications.”

President Trump posted video of his supporters surrounding a Biden-Harris campaign bus with the comment, “I LOVE TEXAS!” Witnesses told the New York Times the Trump supporters were trying to force the bus off the road.

Yahoo News: “With just three days left until the election, President Trump’s enemies are seeing new opportunities in staunchly red states. The Lincoln Project, a conservative-led political action committee dedicated to eroding President Trump’s support among Republicans, announced on Saturday that it is buying over $1 million of ads in Georgia, Montana and South Carolina in the final days of the presidential race.”

President Trump’s favorite coronavirus adviser Scott Atlas apologized on Twitter for appearing Saturday on Russia’s state-controlled RT network, where he insisted that the U.S. is turning the corner on the pandemic and that lockdowns are actually “killing people,” Axios reports.