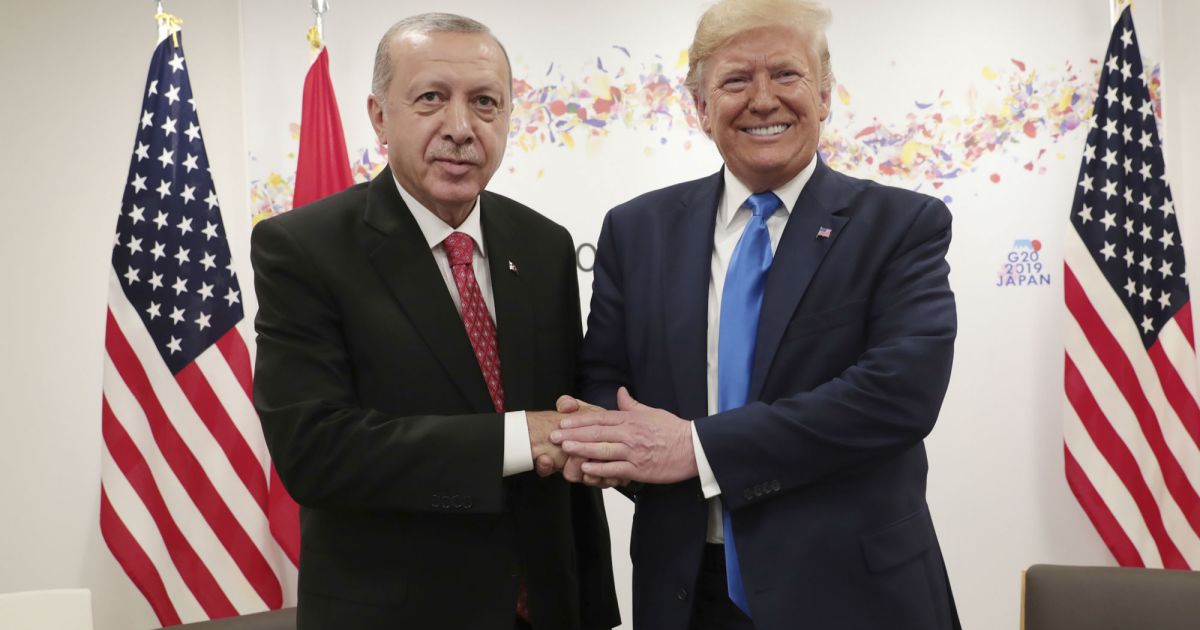 New York Times: “Geoffrey Berman was outraged. The top federal prosecutor in Manhattan, Mr. Berman had traveled to Washington in June 2019 to discuss a particularly delicate case with Attorney General William Barr and some of his top aides: a criminal investigation into Halkbank, a state-owned Turkish bank suspected of violating U.S. sanctions law by funneling billions of dollars of gold and cash to Iran.”

“For months, President Recep Tayyip Erdogan of Turkey had been pressing President Trump to quash the investigation, which threatened not only the bank but potentially members of Mr. Erdogan’s family and political party. When Mr. Berman sat down with Mr. Barr, he was stunned to be presented with a settlement proposal that would give Mr. Erdogan a key concession.”

Bloomberg: “For a few months this year, a U.S. government aid program meant for struggling small-business owners was handing out $10,000 to just about anyone who asked. All it took was a five-minute online application. You just had to say you owned a business with at least 10 employees, and the grant usually arrived within a few days.”

“People caught on fast. In some neighborhoods in Chicago and Miami, it seemed like everyone made a bogus application to the Small Business Administration’s Covid-19 Economic Injury Disaster Loan program. Professional thieves from Russia to Nigeria cashed in. Low-level employees at the agency watched helplessly as misspent money flew out the door. Even after the $20 billion in funding for grants dried up in July, the fraud continued, as scammers looted a separate $192 billion pot of money set aside for loans.”

“As an immense new surge in coronavirus cases sweeps the country, President Trump is closing his re-election campaign by pleading with voters to ignore the evidence of a calamity unfolding before their eyes and trust his word that the disease is already disappearing as a threat to their personal health and economic well being,” the New York Times reports.

“The president has continued to declare before large and largely maskless crowds that the virus is vanishing, even as case counts soar, fatalities climb, the stock market dips and a fresh outbreak grips the staff of Vice President Mike Pence.”

The Guardian: “The Republican party has become dramatically more illiberal in the past two decades and now more closely resembles ruling parties in autocratic societies than its former center-right equivalents in Europe, according to a new international study.”

“In a significant shift since 2000, the GOP has taken to demonising and encouraging violence against its opponents, adopting attitudes and tactics comparable to ruling nationalist parties in Hungary, India, Poland and Turkey.”

“By contrast the Democratic party has changed little in its attachment to democratic norms, and in that regard has remained similar to centre-right and centre-left parties in western Europe. Their principal difference is the approach to the economy.”

“As a lifelong Republican until Nov. 9, 2016 — and as a foreign policy adviser to three Republican presidential candidates — it gives me no joy to write those words. It’s true that the party had long-standing problems — conspiracy-mongering, racism, hostility toward science — that Donald Trump was able to exploit. But he has also exacerbated all of those maladies, just as he made the coronavirus outbreak much worse than it needed to be.”

“Their push to de-emphasize tests coincided with a dramatic drop in testing across Florida, even as the country was careening toward a fall coronavirus surge. A CNN analysis of the Florida state official numbers, aggregated by the Covid Tracking Project, shows that testing dropped off at the end of July and early August, with a peak seven-day average over 90,000 tests per day on July 18. Six weeks later, in early September, the seven-day average dropped by nearly half, with fewer than 48,000 tests per day, and hovered between there and 60,000 during the fall.”

“The economy grew at a record pace in the third quarter, the Commerce Department reported Thursday, recovering a good chunk of pandemic losses but still below where it ended 2019,” the Wall Street Journal reports.

“Forecasters expect the economy to expand through the fourth quarter, though more slowly, amid a pandemic still disrupting lives and commerce as the virus infects tens of thousands of people a day. Analysts project the economy will end 2020 smaller than a year earlier, but grow in 2021.”

New York Times: “Already, there are signs that the recovery is losing steam.”

Wall Street Journal: “Nationwide, the U.S. state budget shortfall from 2020 through 2022 could amount to about $434 billion, according to data from Moody’s Analytics, the economic analysis arm of Moody’s Corp. The estimates assume no additional fiscal stimulus from Washington, further coronavirus-fueled restrictions on business and travel, and extra costs for Medicaid amid high unemployment.”

“That’s greater than the 2019 K-12 education budget for every state combined, or more than twice the amount spent that year on state roads and other transportation infrastructure.”

“Deficits have already prompted tax hikes and cuts to education, corrections and parks. State workers are being laid off and are taking pay cuts, and the retirement benefits for police, firefighters, teachers and other government workers are under more pressure.”

“Senior advisers and allies of Joe Biden have been bombarded with emails, texts and phone calls from Democrats looking for jobs in a potential Biden administration as the jockeying for key positions shifts into high gear ahead of the election,” the Wall Street Journal reports.

“Mr. Biden, long superstitious about elections, has so far avoided making detailed plans about who will serve in his administration if he wins, leading to a waterfall of speculation, but little concrete information about what his cabinet and administration might look like. A Biden transition official said he isn’t making any personnel decisions pre-election.”

The British Labour Party has suspended its former leader Jeremy Corbyn after he said antisemitism in the party was “overstated” following a damning report from the equality watchdog, The Guardian reports. The move is likely to ignite a civil war in the party between the leader, Keir Starmer, and Corbyn-supporting MPs.

“Federal agents on Thursday arrested two men, including the self-proclaimed leader of the Base, a violent, white supremacist group, as part of a continuing crackdown on extremism in Michigan three weeks after the FBI said it thwarted a plot to kidnap Gov. Gretchen Whitmer,” the Detroit News reports.

A spokesman for UPS told the Daily Beast on Thursday that they had located a mysterious package that Fox News host Tucker Carlson suggested had been deliberately misplaced or intercepted because it contained “damning” materials on the Biden family. Said a spokesman: “After an extensive search, we have found the contents of the package and are arranging for its return.” So I guess we will now find out!! I can’t wait to see what it is. LOL.

“One month before a purported leak of files from Hunter Biden’s laptop, a fake ‘intelligence’ document about him went viral on the right-wing internet, asserting an elaborate conspiracy theory involving former Vice President Joe Biden’s son and business in China,” NBC News reports.

“The document, a 64-page composition that was later disseminated by close associates of President Trump, appears to be the work of a fake ‘intelligence firm’ called Typhoon Investigations.”

“Weeks after Donald Trump’s lawyer Rudy Giuliani first pushed the Hunter Biden files and a collection of sordid dirt to the New York Post in a last-ditch effort to drag his client across the 2020 finish line, both he and the president, as well as several of Trump’s political lieutenants, have grown frustrated at the lack of impact it’s had,” the Daily Beast reports.

“But rather than conceding that the broader public might not be interested, Trump and Giuliani have instead put the blame for the failure to break through in part on Attorney General William Barr.”

The Economist: The story of Hunter Biden and the diminishing returns to disinformation.

NBC News: “Emails show that Susan Pompeo routinely gives instructions to State Department officials from her personal email address about everything from travel plans and restaurant reservations to the elite Madison Dinners that NBC News reported on in May. Many involve routine matters like logistics and scheduling for official events that would involve coordination with the secretary’s spouse in any administration.”

“But other requests, such as seeking assistance with planning a multiday visit for an elite group of young executives from Kansas, appear to be less directly connected to advancing the State Department’s core mission. They include maintenance requests for the house the Pompeos rent on a Washington-area military base, which Susan Pompeo appears to be routing through the State Department’s Diplomatic Security Service. Emails show special agents from the service’s Secretary of State Protective Division updating Susan Pompeo about repairs to the HVAC system in 2018 and to the porch and stairs in 2019.”

Miles Taylor, the former Homeland Security official who admitted he was “Anonymous,” denied knowledge of the identity of the secret administration official in an August 2020 interview with CNN, shortly after he went public with his criticism of Trump.

Taylor also dismissed the importance of discovering the identity of “Anonymous,” saying it had become a “parlor game” in Washington to guess who the person was.

New York Times: “To Mr. McConnell, Monday was a day for celebration as he achieved what even he could not have imagined four years ago, when he set out to leverage Donald Trump’s presidency and his own formidable Senate power to put a deep and enduring conservative imprint on the federal courts. Three Supreme Court justices, 53 appeals court judges and scores of new young conservatives presiding on the district courts: All were delivered under Mr. McConnell’s close supervision and direction.”

Said McConnell: “I certainly didn’t expect to have three Supreme Court justices. At the risk of tooting my own horn, look at the majority leaders since L.B.J. and find another one who was able to do something as consequential as this.”