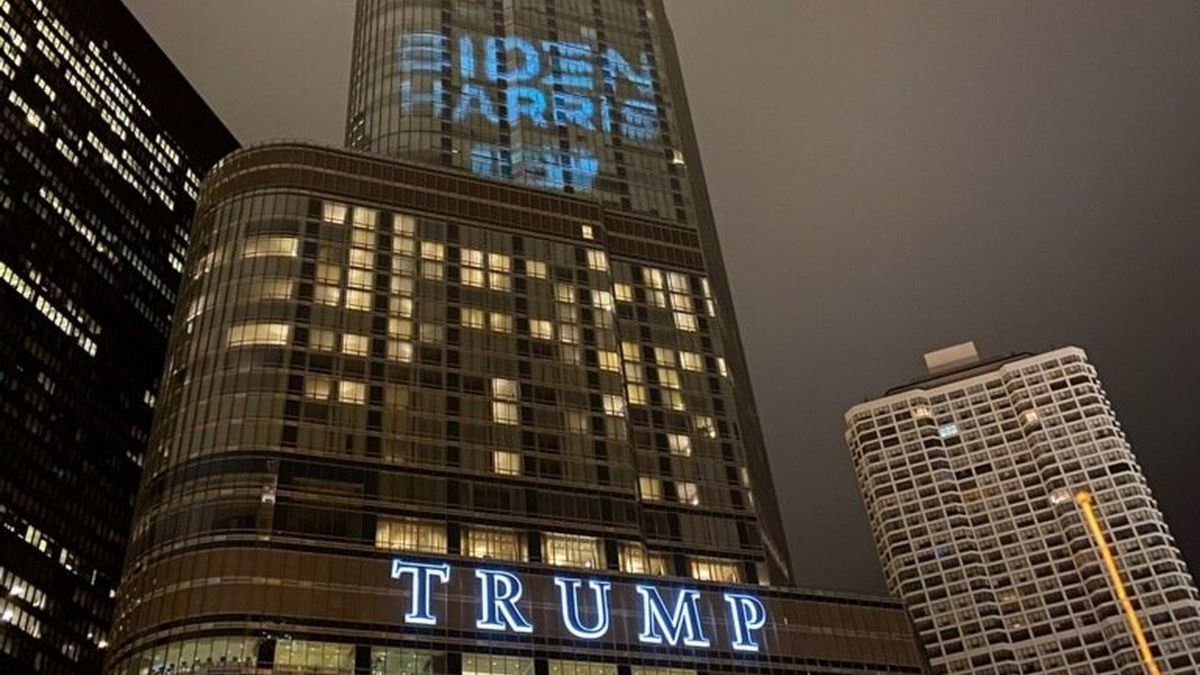 New York Times: “The president’s federal income tax records… show for the first time that, since 2010, his lenders have forgiven about $287 million in debt that he failed to repay. The vast majority was related to the Chicago project.”

“How Mr. Trump found trouble in Chicago, and maneuvered his way out of it, is a case study in doing business the Trump way.”

“When the project encountered problems, he tried to walk away from his huge debts. For most individuals or businesses, that would have been a recipe for ruin. But tax-return data, other records and interviews show that rather than warring with a notoriously litigious and headline-seeking client, lenders cut Mr. Trump slack — exactly what he seemed to have been counting on.”

Washington Post: “Since his first month in office, Trump has used his power to direct millions from U.S. taxpayers — and from his political supporters — into his own businesses. The Washington Post has sought to compile examples of this spending through open records requests and a lawsuit.”

“In all, he has received at least $8.1 million from these two sources since he took office.”

“The president brought taxpayer money to his businesses simply by bringing himself. He’s visited his hotels and clubs more than 280 times now, making them a familiar backdrop for his presidency. And in doing so, he has turned those properties into magnets for GOP events, including glitzy fundraisers for his own reelection campaign, where big donors go to see and be seen.”

A new Imperial College London study found the level of protective antibodies in people wane “quite rapidly” after coronavirus infection, the BBC reports.  “Exactly what the antibody drop means for immunity is still uncertain… However, the researchers warn antibodies tend to be highly predictive of who is protected.”

Associated Press: “Now the virus is getting worse in states that the president needs the most, at the least opportune time. New infections are raging in Wisconsin and elsewhere in the upper Midwest. In Iowa, polls suggest Trump is in a toss-up race with Biden after carrying the state by 9.4 percentage points four years ago.”

“The Russian government on Tuesday made its most aggressive move yet to try to stem a second wave of the coronavirus, mandating masks in public places throughout the country,” the New York Times reports.

Vanderbilt University School of Medicine looked at the current COVID outbreak in Tennessee and broke the hospitalization numbers down by the counties patients were coming from and whether those counties had masking mandates. The results are stark. The growth in hospitalizations is greatest in counties without masking requirements. Indeed, the inverse relationship between masking and hospitalization lines up across the spectrum from areas with little masking to those where mandates are widespread. You can see the discussion of the study here.

“Expand the court… Republicans do this because they don’t believe Dems have the stones to play hardball like they do. And for a long time they’ve been correct. But do not let them bully the public into thinking their bulldozing is normal but a response isn’t. There is a legal process for expansion.”

Playbook: “This kind of rift should not be overlooked, because it will come to dominate governance should Washington turn all blue. AOC is seen as one of Schumer top potential primary challengers. The simplicity and bare-knuckled nature of her message could resonate among a Democratic base that’s looking for knife fights, not senatorial process arguments. While Schumer and Joe Biden say changing the size of the court is on the table, the left is screaming that it should play by the same rules as the GOP — which is to say Democrats should not worry about tradition and instead blow up what they consider the quaint processes that govern official Washington.”

Daily Beast: “On Monday, the Supreme Court upheld an appeals court decision that blocked extending Wisconsin’s deadline for absentee ballots by six days. In his notes explaining his decision, Justice Brett Kavanaugh delivered a very Trumpian warning that any votes that came in after Election Day could be viewed as illegitimate.”

Wrote Kavanaugh: “States want to avoid the chaos and suspicions of impropriety that can ensue if thousands of absentee ballots flow in after Election Day and potentially flip the results of an election.”

Justice Elena Kagan dissented while rebuking the Trump appointee: “There are no results to ‘flip’ until all valid votes are counted. And nothing could be more ‘suspicious’ or ‘improper’ than refusing to tally votes once the clock strikes 12 on Election Night.”

Rick Hasen: “Should we panic about Justice Brett Kavanaugh’s concurring opinion in the Wisconsin voting case that the Supreme Court decided Monday night? Does it mean that the Supreme Court is going to do something crazy that will hand the election to President Trump even if Joe Biden is ahead in the count?”

“The short answer is that an intervention by the Supreme Court to decide the presidential election is still extremely unlikely — but if the extremely unlikely happens, there’s great reason to be worried about the court’s protection of voting rights and the integrity of the vote.”

Michigan Gov. Gretchen Whitmer (D) writes in The Atlantic about the thwarted plot to kidnap her.

“When I put my hand on the Bible at my inauguration, it did not occur to me that less than two years later, I would have to tell my daughters about a plot against me. But earlier this month, I learned that a multistate terrorist group was planning to kidnap and possibly kill me. Law-enforcement announced charges against 14 people as part of the plot. As jarring as that was, just over a week later, President Trump traveled to Michigan, and when a crowd chanted ‘Lock her up’ after he mentioned me, he said, ‘Lock them all up.’”

“I am not surprised. I have watched the president wedge a deeper divide in our country; refuse to denounce white supremacists on a national debate stage; and launch cruel, adolescent attacks on women like Senator Kamala Harris and public-health leaders like Anthony Fauci. And while I won’t let anything distract me from doing my job as governor, I will not stand back and let the president, or anyone else, put my colleagues and fellow Americans in danger without holding him accountable.”

“A federal judge on Tuesday rejected an effort by the Department of Justice to have the United States government replace President Trump in a lawsuit in which he is accused of defaming writer E. Jean Carroll after she said he raped her in the mid-1990s,” CNBC reports.

Senate Majority Leader Mitch McConnell motioned for the Senate to adjourn until November 9, Yahoo News reports.  The move shuts down the Senate from doing any legislative business, including reaching a deal on additional coronavirus aid, until after voters have cast their ballots.

“After weeks of early and mail voting, at least 66 million Americans have already cast their ballots for next week’s election, a historic figure that has upended expectations about Election Day and which states could decide the presidential contest,” the Washington Post reports.

“The massive number, which includes voters who have cast ballots either in person or by mail, has stunned election officials and campaign operatives. It equals close to half of the total turnout in 2016 — all but ensuring, with early voting continuing through the weekend, that the majority of ballots will be cast before Election Day for the first time in history.”

“Delivery delays during an election can’t be unlawful, because the Constitution doesn’t guarantee states any particular level of service when it comes to mail-in ballots, the U.S. Postal Service told a federal judge,” Bloomberg reports.

Bloomberg: “Trump held three rallies Monday, all in Pennsylvania, with three more scheduled Tuesday and as many as five or six a day expected by the weekend. The rallies befit the showman with roots in reality television: blaring music, slick production, video montages, warm-up speeches, Air Force One as a backdrop and the president himself as the headline attraction. Attendees erupt in screams and cheers at his arrival, and local Republicans say it’s unlike any political event they’ve seen.”

“Holding rallies in defiance of coronavirus health recommendations has fueled voters’ disapproval of his handling of the pandemic — feeding Biden’s key argument that Trump has mishandled the first major crisis of his presidency. And pollsters say there’s little evidence of a rally boost.”

“Alan Abramowitz, an Emory University professor who studied Trump’s rally impact in the 2016 and 2018 cycles, found they didn’t move the needle in the states where they were held. He expects the same in 2020.”

Philadelphia Inquirer: Trump blitzes Pennsylvania with 3 rallies as coronavirus spikes lead to calls for him to stop.

Elaina Plott: “For all the attention paid to what Trump represents in American politics, the most salient feature of his ascent within the Republican Party might be what he doesn’t represent. When Ronald Reagan overthrew the old order of the Republican Party in the 1980 election, he did so as the figurehead of a conservative movement that had been gestating since the 1950s, with an intellectual framework that William F. Buckley Jr. had been articulating for a quarter-century, with a policy blueprint provided by the Heritage Foundation and with a campaign apparatus that quickly pivoted to the task of converting the new constituencies he’d brought into the party to a base durable enough to build on. The total merger of his movement with his party didn’t happen immediately, but the key elements of it were in place by the end of his first term, and there was not much ambiguity about what the G.O.P., if it was transforming, was transforming into.”

“Trump’s takeover, by contrast, has been as one-dimensional as it has been total. In the space of one term, the president has co-opted virtually every power center in the Republican Party, from its congressional caucuses to its state parties, its think tanks to its political action committees. But though he has disassembled much of the old order, he has built very little in its place.”

Said GOP strategist Liam Donovan: “You end up with this weird paradox where he stands to haunt the G.O.P. for many years to come, but on the substance it’s like he was never even there.”