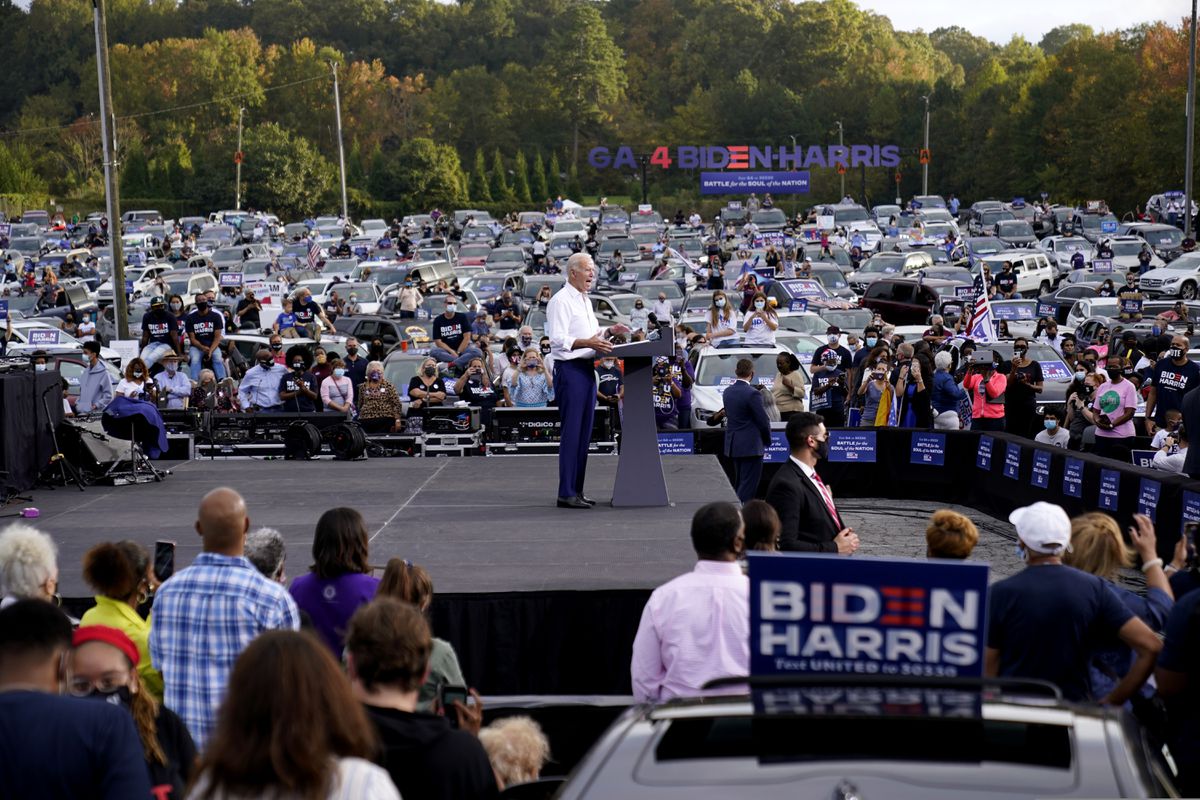 First Read moves Arizona from Lean Democratic to Toss Up and shifts Texas from Lean Republican to Toss Up. “We were torn on Arizona. Biden maintains his lead there, but the polling has tightened. And right now, it seems to be in a different place than Michigan, Pennsylvania and Wisconsin, which is why we’ve moved it to Toss Up…”

Texas: Biden has decreased his spending to about $600,000 for the week (and he’s getting outside help), while Trump and GOP outside groups were dark.”

CNBC: “The coronavirus pandemic has introduced additional barriers to voting for young people, a population that isn’t known for turning out in large numbers. Only 43% of citizens ages 18-24 voted in the 2016 election compared to 61.4% of eligible citizens who voted overall.”

“Despite Covid-19 challenges, however, young voters are poised to be a decisive force in the 2020 election with data suggesting record turnout from the group.”

“President Trump’s campaign has all but pulled its advertising out of Florida, as it stakes its relatively small bank account on the industrial northern states that carried him to victory in 2016,” Bloomberg reports.

“Trump is now placing his final bet on just four battleground states: Michigan, Minnesota, Ohio and Pennsylvania. Polls show he’s down in all those states but Ohio, where it’s effectively even.”

An update from the Washington Post: “Bloomberg News report that Trump is pulling TV from Florida is wrong… Trump has pulled TV reservations in recent months, and shifted spending to coordinated campaign. But not abandoning state. That said, Dems, with Bloomberg, winning air war nearly 4 to 1.“

He added: “Fox, Fox is very disappointing… This would not have happened with Roger Ailes, I can tell you that.”

“The only people truly better off than they were four years ago are the billionaires that got Trump’s tax cuts. In the meantime, he has not been able to manage extending relief to millions of families who can’t pay the rent right now, can’t put food on the table right now. You know, I don’t understand how it is that he cannot organize Republicans in Congress to do the right thing. And its not like it’s his money that we’re asking to pay because he doesn’t pay taxes.”  — Barack Obama, quoted by The Hill.

Politico: “In the most competitive 94 districts, Democrats have booked over $177 million in ads since Sept. 1, while their GOP opponents have booked $93 million.”

“Republican outside groups have partly made up the difference, but the party is still bracing for a string of defeats next month.”

New York Times: “Once regarded as the most vulnerable incumbents, many Democrats who carried Trump districts in 2018 are poised to win re-election, boosting the party’s chances of building its House majority.”

“Michael Bloomberg is funding a last-minute spending blitz to bolster former Vice President Joseph R. Biden Jr. in Texas and Ohio, directing millions toward television advertising in two red states that have shifted away from President Trump in the general election,” the New York Timesreports.

“A political adviser to Mr. Bloomberg said the billionaire former mayor of New York City would use his super PAC, Independence USA, to air intensive ad campaigns in all television markets in both states. The cost of the two-state campaign is expected to total around $15 million.”

Ron Brownstein: Why the GOP hold on Texas is loosening.

“President Trump loves to say that if Joe Biden wins the White House, stocks will crash, retirement accounts will vanish and an economic depression ‘the likes of which you’ve never seen’ will engulf the nation. But much of Wall Street is already betting on a Biden win — with a much different take on what the results will mean,” Politico reports.

“Traders in recent weeks have been piling into bets that a ‘blue wave’ election, in which Democrats also seize the Senate, will produce an economy-juicing blast of fresh fiscal stimulus of $3 trillion or more that carries the U.S. past the coronavirus crisis and into a more normal environment for markets.”

“Far from panicking at the prospect of a Biden win, Wall Street CEOs, traders and investment managers now mostly say they would be fine with a change in the White House that reduces the Trump noise, lowers the threat of further trade wars and ensures a continuation of the government spending they’ve seen in recent years.”

Nicholas Lehmann: “Trump will not be President forever—he may be in the role for only a few more months. It’s hard to imagine that the Republican Party could come close to replicating him with another Presidential candidate, unless it’s Donald Trump, Jr. But is there a future in Trumpism?”

U.S. Senate foes Lindsey Graham (R) and Jaime Harrison (D) have agreed to a final debate on Friday evening, four days before Election Day in the race for one of South Carolina’s prized seats, the Charleston Post and Courier reports.

“The initial reactions to these would be very different. But so, probably, would be the lasting effects. One would be a defeat for Trump, the second a rejection not just of Trump but perhaps of Trumpism. The third would open up the possibility for a re-making of the GOP and of conservatism itself.”

A Wall Street Journal review found that immigration was the fourth most mentioned issue in Donald Trump’s 2016 campaign TV ads but has barely cracked the top 10 this cycle.

“The Trump campaign has instead focused on violence that has erupted at some protests around the country, jobs, government spending and China. Notably, terrorism—the third most mentioned issue in Mr. Trump’s 2016 ads and one he often connected to immigration four years ago—isn’t among the top 10 most mentioned issues in 2020.”

Rep. Ilhan Omar (D-MN) told Axios that given the way progressives have shaped Joe Biden’s policy platform, she and other members of “The Squad” expect a liberal turn from him if he’s elected.

“Progressives have largely refrained from publicly criticizing Biden in the lead-up to the election, even though he hasn’t signed on to their most far-reaching policies. Instead, they’re focusing solely on beating Trump.”

“But Omar’s comments reflect the pressure campaign they’ll launch if he’s elected to ensure that their liberal policies become law.”

President Trump has his eye on hosting an election night party at his own hotel in the nation’s capital, the AP reports.

Over the weekend, the campaign pushed out fundraising emails in the president’s name offering donors the chance to enter a drawing “to join Team Trump at the Election Night Party in my favorite hotel,” in Washington, suggesting he will use his luxury hotel as the backdrop for reacting to election results.