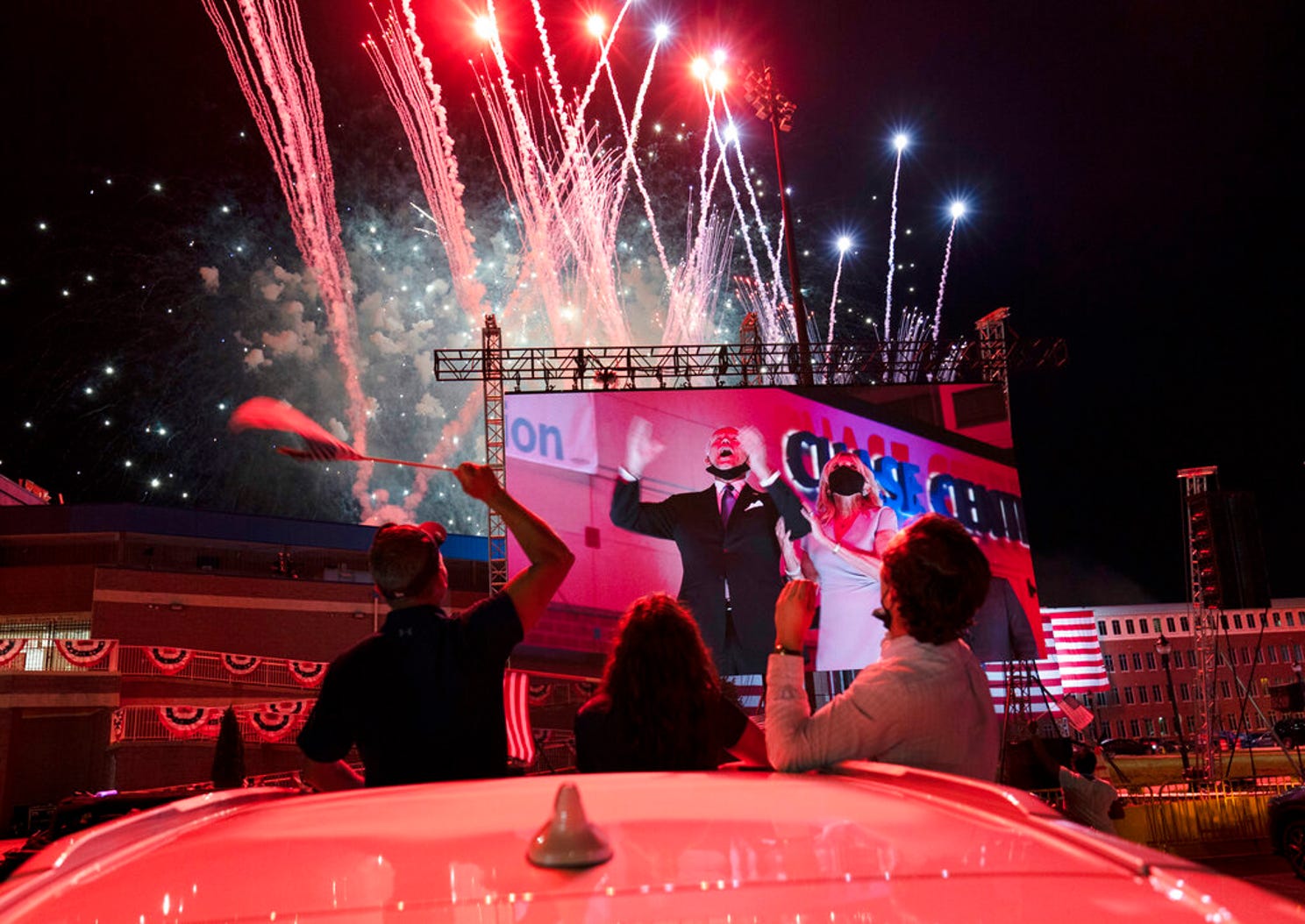 Heading into the final week of the 2020 presidential campaign, Joe Biden now holds his largest-ever lead over President Trump, 54% to 42%, according to a new Yahoo News/YouGov poll — a 12-point margin that’s four times the size of Hillary Clinton’s national advantage over Trump at this point in 2016.

A new Harvard Institute of Politics poll of voters aged 18 to 24 years finds 63% of respondents indicated they will “definitely be voting,” which remains consistent with the turnout measured in the September 2020 survey, and in contrast to 47% during this same time in 2016.

Young voters prefer Joe Biden over Donald Trump by a large margin, 63% to 25%.

A new Atlanta Journal Constitution poll finds Sen. David Perdue (R) is essentially tied with Jon Ossoff (D), with the Republican incumbent at 45% and his challenger at 46%. About 4% back Libertarian Shane Hazel, and 5% are undecided. The close margins raise the possibility the race could head into a January runoff.

“Another round of voting is almost certain in the special election for U.S. Sen. Kelly Loeffler’s seat, where the 21-candidate race makes it extremely difficult for anyone to win the majority-vote necessary to avoid the runoff.”

Mark McKinnon: “In many ways 2020 is haunted by 2016. So in an effort to tune into a clear, crisp radio signal through all the white noise, I interviewed the ultimate expert: Dave Wasserman. He’s one of the very few political seers who predicted—in mid-September of 2016, no less—that Trump might very well lose the popular vote and yet win the electoral college.”

“Wasserman covers congressional races for the nonpartisan and widely respected Cook Political Report. He has a microscopic understanding of what is happening around the country politically…”

“After talking with him I came away with the sense that Trump is not just toast, but burnt toast. To use a poker metaphor: In the last election, Trump won by pulling an inside straight to win. This time he’ll need nothing short of a royal flush—by pulling an ace from his sleeve.”

“It’s the pandemic, stupid.” — James Carville, in an interview with MSNBC, updating his iconic campaign slogan for the 2020 presidential election.

“Donald Trump is chasing every possible opening across the electoral map. Joe Biden is sitting on his lead, carefully surveying the landscape for states that might serve as insurance policies,” Politico reports.

“It’s a jarring flip of the script for an incumbent president and his challenger eight days before Election Day. Trump, in the last gasp of his campaign, is barreling across the country, hoping large rallies and bets placed across the board will pay off for his underdog campaign. Biden is doing fewer and smaller events — and even peering past the election toward governing.”

“The U.S. Supreme Court upheld Wisconsin’s voting laws Monday, rejecting an effort to require the counting of absentee ballots that are sent back to election officials on or just before Election Day,” the Milwaukee Journal Sentinel reports.

“The court’s 5-3 ruling means that absentee ballots will be counted only if they are in the hands of municipal clerks by the time polls close on Nov. 3.”

“Systemic racism is when it’s easier to vote in space than it is to vote in a Black or Latino neighborhood on Earth.” — Virginia congressional candidate Qasim Rashid observing astronaut Kate Rubins casting her vote from the International Space Station this weekend.

“Almost every Black Georgia voter queuing up at the polls has a story about 2018,” Politico reports.

“Most waited for hours in lines that wrapped around their voting locations. Some were removed from the voter rolls arbitrarily, forcing them to fill out confusing provisional ballots on Election Day. Others stayed home altogether and — after watching Democrat Stacey Abrams lose the gubernatorial race by fewer than 60,000 votes — regretted that decision.”

“Now, voter enthusiasm among all races is at an all-time high in one of the most consequential battleground states in the country. So is voter anxiety.”

Two Texas counties, Denton in the Dallas-Fort Worth suburbs and Williamson in the Austin suburbs, have now surpassed their total 2016 turnout with early voting, according to David Wasserman. Hays County, south of Austin, passed that distinction two days ago. And there’s still a week of voting left.

“Joe Biden has outraised President Trump on the strength of some of the wealthiest and most educated ZIP codes in the United States, running up the fund-raising score in cities and suburbs so resoundingly that he collected more money than Mr. Trump on all but two days in the last two months,” according to a New York Times analysis.

“The data reveals, for the first time, not only when Mr. Biden decisively overtook Mr. Trump in the money race — it happened the day Senator Kamala Harris joined the ticket — but also what corners of the country, geographically and demographically, powered his remarkable surge.”

A loud chant of “Lock him up!” broke out at President Trump’s rally in Allentown, Pennsylvania, as the president attacked Joe Biden.

President Trump made fun of Senator Kamala Harris’s laughter, called House Speaker Nancy Pelosi “crazy” and said one of his female interviewers was “crazed,” yet insisted at a Pennsylvania rally on Monday that suburban women will support his re-election, Bloomberg reports.

“Over the course of the next 87 minutes, the president made another 130 false or inaccurate statements. Many were entirely made up. Others were casual misstatements of simple facts, some clearly intended to mislead. He lied about his own record and that of his opponent. He made wild exaggerations that violate even the pliable limits of standard political hyperbole.”

FiveThirtyEight: “In any given election, between 35 and 60 percent of eligible voters don’t cast a ballot. It’s not that hard to understand why. Our system doesn’t make it particularly easy to vote, and the decision to carve out a few hours to cast a ballot requires a sense of motivation that’s hard for some Americans to muster every two or four years — enthusiasm about the candidates, belief in the importance of voting itself, a sense that anything can change as the result of a single vote.”

“But who does — and doesn’t — vote is complex. Most Americans don’t fall neatly into any one category. Instead, as we found in our new poll with Ipsos, most… vote inconsistently, or at moments when they feel like their vote has a chance to make a difference, or when the stakes of not voting are just too high, which is how many Americans describe this upcoming election.”

“Democratic fundraisers are privately urging billionaire former presidential candidate Mike Bloomberg and his team to invest in hotly contested Senate races with just over a week until Election Day,” CNBCreports.

“The pleas come as a super PAC aligned with Senate Majority Leader Mitch McConnell floods these races with cash on behalf of the GOP candidates.”

Wall Street Journal: “The U.S. Postal Service has urged voters to mail in their presidential ballots at least a week before their state’s due date in order to be counted. But that might not be enough time.”

“Of the 29 states that require mail-in ballots to arrive on or before election day, 28 have since late July seen periods of average delivery times exceeding six days, the Journal analysis found. Among them are battleground states like Florida, Arizona, Wisconsin and Georgia.”

“The former congressman was experiencing abdominal pain and was hurried into the emergency room Monday morning for tests. Doctors determined he had a hernia, which could be life-threatening if it’s not treated fast.”

Variety: “The dual Biden and Trump interviews, the latter of which the President cut short, drew a total of 16.8 million total viewers on CBS and scored a 2.4 rating among adults 18-49, per Nielsen time adjusted fast national numbers. That represents the most viewers to tune in since the infamous Stormy Daniels interview from March two years ago.”