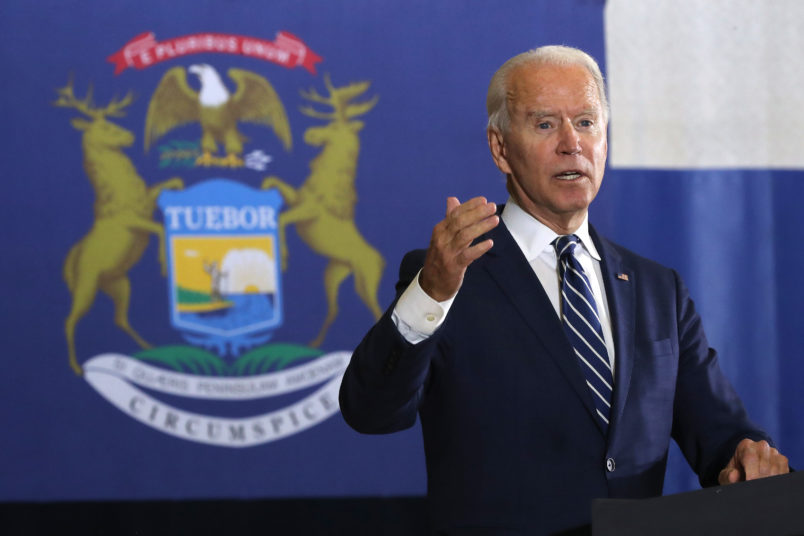 “An ex-business partner of Hunter Biden, in a news conference organized by the Trump campaign, alleged that former Vice President Joe Biden was part of discussions around his son’s efforts to form an investment venture with a Chinese oil company,” the Wall Street Journal reports.

“The venture—set up in 2017 after Mr. Biden left the vice presidency and before his presidential campaign—never received proposed funds from the Chinese company or completed any deals, according to people familiar with the matter.”

Said Biden: “It is a live ball. We’re going to have to do that… The last thing we need to do is turn the Supreme Court into just a political football, whoever has the most votes gets whatever they want.”

Here’s how it begins:

STAHL: You ready for tough questions?

STAHL: Last time you were like bring it on.

TRUMP: No, I’m not looking for that.

STAHL: But you’re OK with some tough questions?

And this is how it ends:

TRUMP: Your first question was “There are going to be tough questions.” I don’t mind that. When you set up the interview you didn’t say that. You said, “Oh let’s have a lovely interview.”

Another excerpt from President Trump’s interview with Lesley Stahl of 60 Minutes:

STAHL: What about the… people with pre-existing conditions?

TRUMP: I’ll protect it. Will be totally protected.

TRUMP: They’ll be protected, Lesley. I mean, the people with pre-existing conditions are going to be protected.

CBS News issued a statement on President Trump’s release of an interview he had done with 60 Minutes earlier this week: “The White House’s unprecedented decision to disregard their agreement with CBS News and release their footage will not deter 60 Minutes from providing its full, fair and contextual reporting which presidents have participated in for decades.”

Leslie Stahl told Pence that she felt he and President Trump had “insulted 60 Minutes” by giving “set campaign speeches” instead of answering her questions.

Said Stahl: “Mr. Vice President, this was not a rally. This was not just a campaign speech to the public. This was supposed to be an interview. And the same with the president. And I feel that you both have insulted 60 Minutes by not answering our questions and by giving set campaign speeches that we’ve heard both of you give at rallies without answering our questions.”

New York Times: “While senior Trump administration officials said this week that Iran has been actively interfering in the presidential election, many intelligence officials said they remained far more concerned about Russia, which has in recent days hacked into state and local computer networks in breaches that could allow Moscow broader access to American voting infrastructure.”

“The discovery of the hacks came as American intelligence agencies, infiltrating Russian networks themselves, have pieced together details of what they believe are Russia’s plans to interfere in the presidential race in its final days or immediately after the election on Nov. 3.”

“President Trump and his advisers have repeatedly discussed whether to fire FBI Director Christopher Wray after Election Day — a scenario that also could imperil the tenure of Attorney General William Barr as the president grows increasingly frustrated that federal law enforcement has not delivered his campaign the kind of last-minute boost that the FBI provided in 2016,” the Washington Post reports.

“The conversations among the president and senior aides stem in part from their disappointment that Wray in particular but Barr as well have not done what Trump had hoped — indicate that Democratic presidential nominee Joe Biden, his son Hunter Biden, or other Biden associates are under investigation.”

Sen. Kamala Harris on Twitter: “My Democratic Senate colleagues and I boycotted the Supreme Court nominee committee vote today. Let’s be clear: this nomination process is a sham and shows how Republicans will stop at nothing to strip health care from millions of Americans with pre-existing conditions.”

With Sen. Susan Collins (R) also opposed to a pre-election vote, that suggests the final Senate vote to confirm Barrett will be 51 to 49.

The Senate Judiciary Committee voted Thursday to advance the lifetime federal judgeship nomination of Kathryn Kimball Mizelle, who earned an embarrassing “not qualified” rating from the American Bar Association, the HuffPost reports.

“Explicit photos and emails purportedly belonging to Hunter Biden were circulating in Ukraine last year at the same time that Rudy Giuliani was searching for dirt there on former Vice President Joe Biden,” Time reports.

“The emails’ alleged availability, which has not been previously reported, comes to light in the wake of Giuliani’s recent claims that he obtained private photos and emails of Hunter Biden from a broken laptop abandoned in Delaware.”

This pretty much confirms that this is an entirely Russian disinformation op.

“Senate Republicans are growing increasingly frustrated with Treasury Secretary Steven Mnuchin as he makes what they see as unacceptable compromises in his quest for a stimulus deal with House Speaker Nancy Pelosi,” the Washington Post reports.

“Mnuchin has already committed to a top-line figure of around $1.9 trillion, much too high for many Senate Republicans to swallow. This includes at least $300 billion for state and local aid, also a non-starter for many in the GOP.”

“Robert O’Brien, President Trump’s national security adviser, said Wednesday that Trump would accept the results of the election if he loses on Nov. 3,” Politico reports.

“Richard Grenell, a close Trump ally who has served numerous roles in the administration, quietly embarked on a pre-election mission last month that was at least partly intended to persuade President Nicolás Maduro of Venezuela to give up power,” the New York Times reports.

“The trip, which was reported by Bloomberg News on Wednesday night, caught the State Department and even some White House officials off guard and created confusion about its purpose.”

President Trump told Outkick that he wanted to be kinder during a second term.

Said Trump: “I think the answer is yes. I want the answer to be yes, but when I first came here, there was so much to do. I didn’t have time to be totally and politically correct. People don’t like me. But, you know, the softer side is good.”

He added: “The answer is yes, I think so. And I want to bring it all together. And what brings it together is success.”

Sen. Bernie Sanders is hoping to be a part of Joe Biden’s potential administration and has expressed a particular interest in becoming Labor secretary, Politico  reports. Said one person close to Sanders: “I can confirm he’s trying to figure out how to land that role or something like it. He, personally, does have an interest in it.”

Sanders himself refused to confirm or deny the report: “Right now I am focused on seeing that Biden is elected president. That’s what my main focus is.”

I would have no problem with that. Seems a perfect fit. Also, better to have him inside the tent…. well, you know the rest of that metaphor.

“Jared Kushner has been talking up the idea of starting a Donald Trump-themed news outlet or some other media company, possibly as soon as after the election,” Business Insider reports.

“Kushner has floated the idea to Republicans and media types throughout the year… But the increased chatter about the rise of another conservative media outlet, possibly branded under the Trump name, has kicked up even more over the last few weeks as the president’s re-election chances continue to sink.”

Associated Press: “Snowden, a former contractor with the U.S. National Security Agency, has been living in Russia since 2013 to escape prosecution in the U.S. after leaking classified documents detailing government surveillance programs.”

“President Trump and his intelligence chief have pushed for quick declassification of a document disputing the 2017 intelligence community finding that Russia acted to help Trump get elected in 2016,” Reutersreports.

“But their effort faces strong objections from inside the intelligence agencies… One reason for their opposition is the proximity of the Nov. 3 election.”