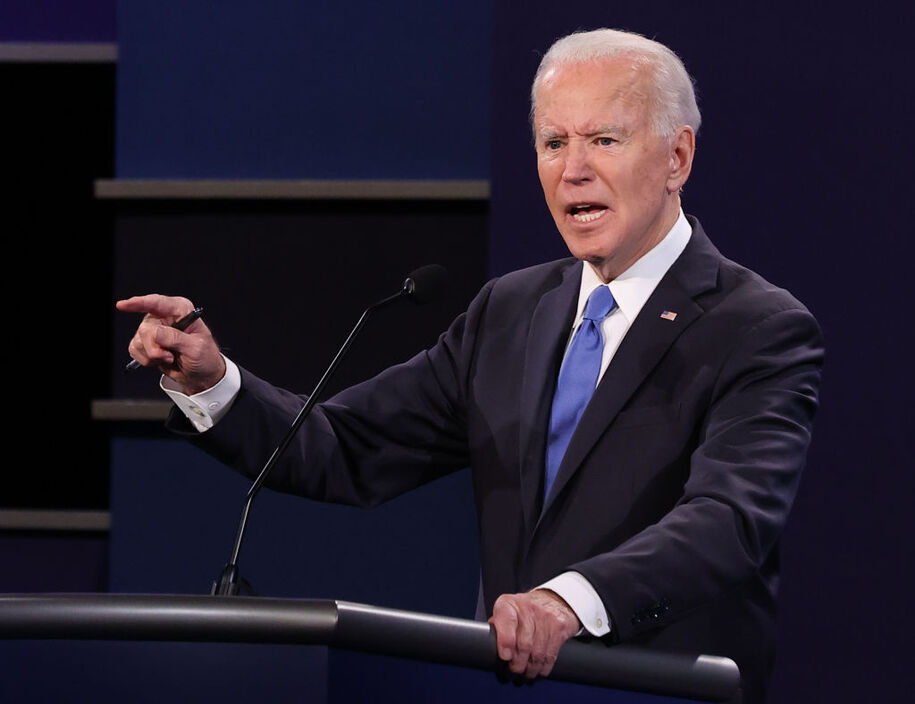 Trump was better in that he was not actively throwing his own feces throughout the debate this time. Grading on a curve punishes reality. Trump was still was the crazy racist uncle who lies as often as he breathes.

Further, the Trump/Republican campaign and debate strategy of thinking that if Biden is forced to debate and/or speak, he will degenerate into a puddle live on air seems to really have screwed them. Biden turned in his best debate performance of the 2020 primary and general election cycle. Biden once again displayed a mastery of the facts and of policy, while showing empathy and care for millions of Americans affected by COVID and the economic depression. Joe Biden is never better than when he displays his moral and righteous anger on behalf of middle class Americans that have been screwed over by Republicans and he did that often tonight.

Perhaps Biden’s best moment was when he turned Trump’s attack on his son into an attack on Trump’s hidden tax returns. “You have not released a single solitary year of your tax returns. What are you hiding?”

And another area where Trump expected to own Biden but it turned out to be the reverse was on the issue of immigration. Biden’s anger about what happened to the migrant children separated from their parents was genuine and shows how much he cares for families — everyone’s family.

On the substance, Biden was the easy winner. It wasn’t even close. On style, it is the same. Trump did nothing to change the trajectory of a race. He is going to be a one term loser of a President.

Josh Marshall: “This debate went like I expected the first debate to go: Biden better on the merits but both guys playing to their preferred ways of speaking to the public, their core audiences. Trump wasn’t out of control like he was in the first debate. I thought he might be just as feral; but he wasn’t. I got that wrong. […]

There were also several parts of the debate in which Biden walked Trump into that won’t age well. Trump was basically indifferent to the fate of these 500 children who look to be permanently cut off from their families. He says they’re living a life of luxury in federal custody and having the time of their lives. He also got Trump to spend a significant amount of time rehashing his absurd excuses for not releasing his taxes. Release your taxes was a good rejoinder to all Trump’s charges about a “Biden crime family.” There’s a lot of grist there that I suspect will be unpacked over the next few days. Trump was significantly better at making a coherent argument for his policies and attacking Biden’s. But Biden more than held his own. And there’s a lot more day two stuff of Trump’s to pick apart.

One additional point: Trump’s big goal tonight was to force Hunter Biden and this menagerie of innuendo, accusations and foreign intelligence operations surrounding him to the center of the campaign debate. The New York Post couldn’t get it done. Fox hasn’t been able to push it out of the Fox Cinematic Universe. Most of the antics over the last 48 hours was trying to bully Welker into laundering it into the conversation. She didn’t. And Trump wasn’t able to do it on his own.”

Finally, a third poll, from YouGov, found the biggest margin for Biden, with 54 percent of debate-watching respondents saying he won while 35 percent saying Trump did.

“For a fact checker, you’re kind of sitting there with Biden. Occasionally you’re like oh that’s wrong. With Trump you’re like the ‘I Love Lucy’ episode in the chocolate factory. You don’t know which one to pick up because there’s just so much.” — Debate fact checker Daniel Dale, on CNN.

Dan Pfeiffer: “One annoyingly persistent element of Trump era political analysis is pundits attributing strategic acumen to Donald Trump’s media strategy despite all of the available evidence to the contrary.”

“This tic reared its incorrect head once more when Trump decided to release the unedited footage of an interview with Lesley Stahl scheduled to air on Sunday during 60 Minutes. A number of Democrats and media-types wondered ‘what’s the secret plan?’ Some speculated that Trump was trying to pre-but the story. Others suggested it was an attempt to fire up his base by attacking the media.”

“None of that is correct. There is no plan. There is no strategy. Trump is not a marketing genius or a media mastermind. He is a moron with the strategic sense of a temper tantrum-prone toddler. The release of the 60 Minutes footage is just more evidence of that fact.”

“The latest list of Georgia voters makes it easy to see why the state is in play this election,” the Atlanta Journal Constitution reports.

“Nearly two-thirds of the new voters since the last presidential election are people of color… Georgia’s changing demographics have long been anticipated, but they happened more quickly than many people expected.”

Ross Douthat: “Donald Trump can still win the 2020 presidential election; something that has a 10 percent or 15 percent chance of happening can certainly transpire. But even more than in 2016, if the president wins this time, we will have to attribute his victory to the workings of divine providence (don’t worry, I have that column pre-written), because what we’re watching is an incumbent doing everything in his power to run up his own margin of defeat.”

Ryan Lizza: “As the likelihood of Trump losing the election has grown, the quantity of misinformation has increased exponentially. Trump’s greatest frustration is that this sealed info bubble that he has created is no longer amplified by traditional media. Just in the last few days Trump has described the press as ‘dumb bastards,’ ‘sleaze,’ ‘crooked,’ and ‘real garbage.’”

“But at a Trump rally, the most privileged spot is reserved for national TV networks, which are afforded a riser in front of what the campaign seems to regard as the second-class media outlets that cover local news. Fox has started carrying the events live again, but other networks rarely do, which enrages Trump, who, even before his fundraising troubles, has needed the larger audience that cable TV brings him.”

John Harris: “As President Trump heads into his final sprint to Election Day, nearly every news report notes that he is running behind in the polls. Journalists aren’t shying away from describing his wilder rhetoric as ‘studded with lies and falsehoods.’ It’s not hard to find examples of anonymous ‘advisers’ lamenting that Trump is not following anyone’s advice but his own.”

“But there’s something easy to miss in the barrage of negative stories: By historical standards, Trump’s coverage is actually favorable, in one critical respect.”

“It is giving generous allowance for the possibility that things aren’t as bad as they seem for the incumbent, and that he may yet have another surprise in store for anyone who thinks that conventional dynamics of politics apply to him.”

The Lincoln Project is out with a powerful ad aimed at men.

0 comments on “The Final Debate Reaction”