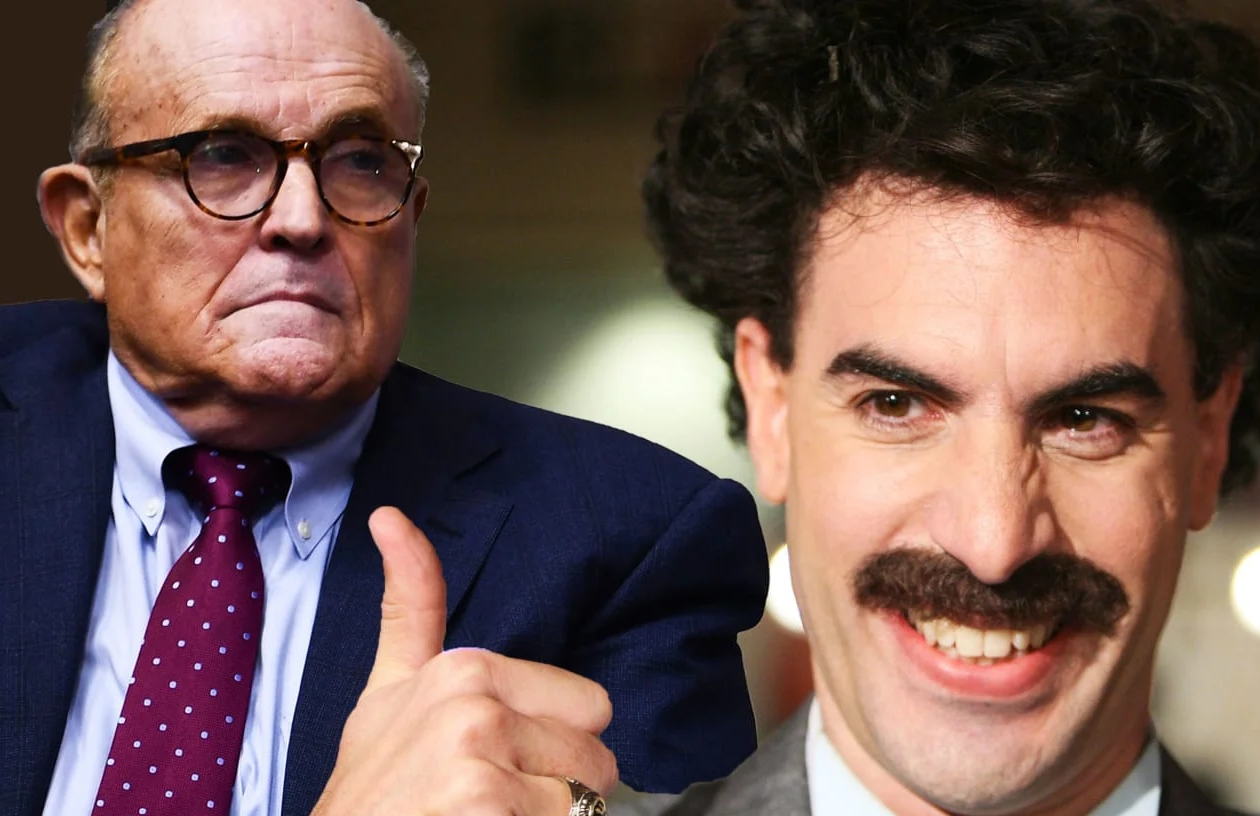 “The reputation of Rudy Giuliani could be set for a further blow with the release of highly embarrassing footage in Sacha Baron Cohen’s follow-up to Borat,” The Guardian reports.

“In the film, released on Friday, the former New York mayor is seen reaching into his trousers and apparently touching his genitals while reclining on a bed in the presence of the actor playing Borat’s daughter, who is posing as a TV journalist.”

“Following an obsequious interview for a fake conservative news program, the pair retreat at her suggestion for a drink to the bedroom of a hotel suite, which is rigged with concealed cameras. After she removes his microphone, Giuliani, 76, can be seen lying back on the bed, fiddling with his untucked shirt and reaching into his trousers.”

“They are then interrupted by Borat who runs in and says: ‘She’s 15. She’s too old for you.’

“President Trump and his allies have tried to paint Joe Biden as soft on China, in part by pointing to his son’s business dealings there,” the New York Times reports.

“But Mr. Trump’s own business history is filled with overseas financial deals, and some have involved the Chinese state.”

“And it turns out that China is one of only three foreign nations — the others are Britain and Ireland — where Mr. Trump maintains a bank account, according to an analysis of the president’s tax records… The foreign accounts do not show up on Mr. Trump’s public financial disclosures, where he must list personal assets, because they are held under corporate names. The identities of the financial institutions are not clear.”

New York Times: “After weeks of spread and warnings in certain areas, a third surge of coronavirus infections has now firmly taken hold across much of the United States.”

“The latest wave — which is raging most acutely in the Midwest and the West, but is also spreading in various areas around the country — threatens to be the worst of the pandemic yet.”

“Its arrival comes as cooler weather is forcing people indoors, setting up a grueling winter that will test the discipline of many Americans who have grown weary of wearing masks and turning down invitations to see family and friends. Over the last week, the country has averaged about 59,000 new cases a day, the most since the beginning of August. The daily total could soon surpass 75,687, a record previously set on July 16.”

Fargo Forum: Overwhelmed by cases, North Dakota tells residents with COVID-19 to do their own contact tracing.

NPR: “Two new peer-reviewed studies are showing a sharp drop in mortality among hospitalized COVID-19 patients. The drop is seen in all groups, including older patients and those with underlying conditions, suggesting that physicians are getting better at helping patients survive their illness.”

Supreme Court nominee Amy Coney Barrett served for nearly three years as a trustee on the board of private Christian schools that “effectively barred admission to children of same-sex parents and made it plain that openly gay and lesbian teachers weren’t welcome in the classroom,” the AP reports.

The three schools, in Indiana, Minnesota, and Virginia, are affiliated with People of Praise, an insular religious community of which Barrett and her husband have been longtime members.

HuffPost: “The plan hasn’t been finalized yet, according to a Democratic aide, but Democrats are preparing to fill their empty seats with poster-sized photos of people who would be hurt by Barrett potentially casting a deciding vote against the Affordable Care Act. These would be the same pictures of people Democrats had on display during Barrett’s confirmation hearing last week.”

“Democrats also intend to hold two press conferences to push back on Barrett’s confirmation ― one on the Capitol steps and one on the Supreme Court steps. It’s not clear if one of those would be happening at the same time as Barrett’s committee vote.”

“Pope Francis, in a new documentary, has called for the creation of civil union laws for same-sex couples, in what amounts to his clearest support to date for the issue,” the Washington Post reports.

“Priests in some parts of the world bless same-sex marriage, but that stance — and Francis’s new remarks — are a departure from official church teaching.”

A new PRRI poll finds 70% of Americans stating that they are in favor of allowing gay and lesbian couples to marry legally.

7White House chief of staff Mark Meadows commented on President Trump’s “60 Minutes” debacle to Fox News: “Well, he didn’t walk out. I mean, the characterization of that — he spent over 45 minutes with Lesley Stahl. I’ve looked at every single minute of the interview, and then some… she came across more like an opinion journalist.”

When asked if the White House would release their video of the interview before Sunday night, Meadows replied: “There’s a high probability. More to come.”

“Senate Republicans reiterated on Wednesday their stiff opposition to the White House’s last-ditch effort to cut a major stimulus deal with House Speaker Nancy Pelosi, the latest indication that passing any new relief package almost certainly will have to wait until after Election Day,” CNN reports.

“House Republicans face the possibility of sinking further into the minority on Nov. 3. President Donald Trump is trailing in key polls. But Kevin McCarthy is confident he’ll remain House GOP leader in the next Congress,” Politico reports.

“McCarthy has already won the support of Rep. Jim Jordan, his one-time rival, after helping the Ohio Republican secure top positions on high-profile committees. And House Minority Whip Steve Scalise, who was long thought to be waiting to replace McCarthy should he stumble or not seek the top position, is also expected to remain in that post, barring a disaster at the polls.”

“Republican governors are pleading for basic public health precautions as their states face a new wave of coronavirus cases, even as President Trump downplays the pandemic’s severity and tells people to move on with their lives,” Politico reports.

“The clashing messages come as large swaths of the country experience uncontrolled spread that state officials fear could swamp their already strapped health systems. They’re putting out calls for volunteers to help staff hospitals, placing new limits on public gatherings and urging, or in some cases mandating, the wearing of masks.”

Large shares of women, seniors and independents now say they’re less likely to trust President Trump for accurate information about COVID-19 since he caught it himself, according to the latest installment of the Axios/Ipsos Coronavirus Index.

Senior officials tell CNN they are alarmed at White House pressure to grant what would essentially be a no-bid contract to lease the Department of Defense’s mid-band spectrum — premium real estate for the booming and lucrative 5G market — to Rivada Networks, a company in which prominent Republicans and supporters of President Trump have investments.

George Will: “As the Donald Trump parenthesis in the republic’s history closes, he is opening the sluices on his reservoir of invectives and self-pity. A practitioner of crybaby conservatism — no one, he thinks, has suffered so much since Job lost his camels and acquired boils — and ever a weakling, Trump will end his presidency as he began it: whining.”

Salon: “White House chief of staff Mark Meadows reported spending tens of thousands of dollars through his campaign and leadership PAC on what appear to be personal expenses, including gourmet cupcakes, a cell phone bill, grocery purchases, lavish meals, thousands of dollars at a Washington jeweler and lodging at the Trump International Hotel.”

“A number of the expenses align with Lynda Bennett’s failed campaign to fill the North Carolina seat left vacant in the U.S. House of Representatives by Meadows… It is illegal to spend campaign and PAC funds on personal expenses, such as groceries and meals.”

Daily Beast: “In recent months, Trump has routinely gossiped with close associates and advisers that Fauci is behaving like a member of anti-MAGA ‘resistance’ commentators. In the past few weeks, the president has told multiple people that he believes Fauci is angling to earn the media’s adulation and that it at times appears to him that the famous infectious disease expert is ‘auditioning’ or ‘trying to get a job at CNN.’”

Sen. Mitt Romney (R-UT) told CNN he has already voted in this year’s election and “did not vote for President Trump.”  But he wouldn’t say if he voted for Joe Biden or wrote someone else in.