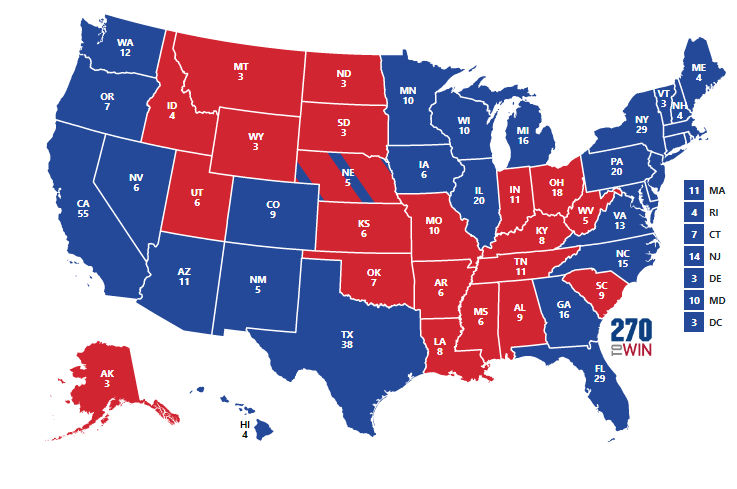 The Current Electoral Poll Map based on the today’s polls below.

With 13 days to go, more than 40 million ballots have already been cast in the 2020 presidential election. That represents 30% of the total number of votes cast in the 2016 election.

A new Gallup poll finds 56% of registered voters believe President Trump does not deserve to be reelected, while 43% say he does.

A new Pew Research poll finds just 4% of registered voters in states with a Senate contest say they will support Donald Trump or Joe Biden and a Senate candidate from the opposing party.

Likewise, just 4% of registered voters say they plan to vote for Biden and the Republican candidate for House in their district or Trump and the Democratic House candidate

Politico: “Joe Biden would seem to have an easy comeback: Look at what your own kids have done since you became president. So far, though, Biden has refused to go there. And he’s likely to maintain that posture during the debate, according to advisers and allies, despite a vow by Trump’s campaign that ‘there will be no escape’ for Biden from questions about his son’s business dealings.”

“Biden’s advisers say that any time spent on issues besides the coronavirus or the economy is lost time. As much as possible, Biden should keep the focus on the president’s biggest liabilities, they say. Yet some allies have been pressing the Biden camp to go harder against Trump’s children considering how aggressively the president is attacking his.”

“Can you imagine if I had had a secret Chinese bank account when I was running for re-election?”

— Barack Obama, while campaigning for Joe Biden in Pennsylvania.

“Former President Barack Obama delivered an often-incredulous and blistering account of his successor’s first four years in office on Wednesday in Philadelphia, making his most direct attacks on President Trump to date both on substance and on a personal level,” CNN reports.

Said Obama: “I never thought Donald Trump would embrace my vision or continue my polices, but I did hope for the sake of the country, that he might show some interest in taking the job seriously. But it hasn’t happened. He hasn’t showed any interest in doing the work or helping anybody but himself and his friends.”

The Hill: “Biden and his team believe President Trump has done damage to his own campaign in recent weeks, a sentiment they see as being reflected in national and battleground state polls that show the Democrat with a lead.”

“Their plan in the final presidential debate is to do nothing more than to underline the contrast between Biden and Trump, and to avoid any mistakes.”

“The president of the United States poses a threat to our collective existence. The choice voters face is spectacularly obvious.”

“The U.S. government has concluded that Iran was behind a series of threatening emails arriving this week in the inboxes of Democratic voters,” the Washington Post reports.

“The emails claimed to be from the Proud Boys, a far-right group supportive of President Trump, but appeared instead to be a deceptive campaign making use of a vulnerability in the organization’s online network.”

New York Times: “For many Democrats, election night in 2016 unfolded with the sickening trajectory of a horror movie in which the teenage protagonists break out the beer and party on, unaware that the serial killer they thought they had vanquished is looming outside the window.”

“The watch parties, the pantsuits, the balloons, the blue-tinted cocktails, the giddiness, the sense of history, the electoral projections showing that Hillary Clinton would surely defeat Donald Trump — to Democrats, these now look like quaint snapshots from some credulous prelapsarian world. And now, with the next presidential election approaching and Joe Biden well ahead of President Trump in the polls, the traumatized, anxious Democratic voters of 2020 are not making the same mistake again.”

Tim Alberta: “Generations of pollsters and journalists have fixated on the question of which candidate voters would rather have a beer with—a window into how personality translates into political success. Here’s the thing: Americans have been having a beer with Trump for the past four years—every morning, every afternoon, every evening. He has made himself more accessible than any president in history, using the White House as a performance stage and Twitter as a real-time diary for all to read. Like the drunk at the bar, he won’t shut up.”

“Whatever appeal his unfiltered thoughts once held has now worn off. Americans are tired of having beers with Trump. His own supporters are tired of having beers with Trump. In hundreds of interviews this year with MAGA loyalists, I have noted only a handful in which the person did not, unsolicited, point to the president’s behavior as exhausting and inappropriate. Strip away all the policy fights, all the administrative action (or inaction), all the culture war politics, and the decision for many people comes down to a basic conclusion: They just do not approve of the president as a human being.”

“Senior advisers to Joe Biden are preparing for the possibility that the Trump administration will throw up roadblocks to Mr. Biden’s transition to the presidency if he wins the election,” the Wall Street Journal reports.

“Mr. Biden’s transition team, a low-profile group of policy experts tasked with making sure the former vice president is ready to take office, has crafted alternative plans if President Trump—who has given mixed messages on whether he would commit to a peaceful transfer of power—refuses to comply with requirements that a president-elect’s team be allowed into federal agencies ahead of Inauguration Day. The team is also planning for a scenario in which the Trump administration declines to share resources or provide briefings seen as crucial for a smooth transition of power.”

Aaron Blake: “If you had said at the start of the election that a president like Trump would have close to a majority — or even a majority, period — on both the economy and the are-you-better-off question, the conventional wisdom would have held that he would be a strong favorite for reelection.”

“In the days after the first debate Sept. 29 between President Trump and Democratic challenger Joe Biden, the president faced two problems,” the Wall Street Journal reports.

“One was his debate performance. On the flight home from the debate, he described it as superb to family and staff, who said little to dissuade him. But by the next day, Jared Kushner, Mr. Trump’s senior adviser and son-in-law, was imploring friendly media personalities and other allies to level with his father-in-law about the angry and aggressive debate style he had displayed, according to people familiar with the calls. Polls would soon show the performance had cost the president support.”

“The other was the fallout from the Supreme Court nomination ceremony he had held the previous weekend at the White House, which Anthony Fauci, the nation’s top infectious disease expert, would soon describe as a “superspreader” of Covid-19. Within days, Mr. Trump would test positive for the disease.”

Prominent Republican pollster Frank Luntz blasted President Trump’s campaign the worst he’s ever seen and saying the president’s advisers should be “brought up on charges of political malpractice,” The Hillreports.

New York Times: “The Supreme Court on Wednesday blocked a trial judge’s ruling that would have allowed, but not required, counties in Alabama to offer curbside voting. The vote was 5 to 3, with the court’s more conservative members in the majority. The court’s brief, unsigned order gave no reasons, which is typical when it rules on emergency applications, and it said the order would remain in effect while appeals moved forward.”

New York Times: “Interviews with 21 Republican and Democratic strategists, many of whom have worked for other presidential campaigns over the past 30 years, suggest that Mr. Trump will need some 11th-hour disruptions in the race. That might include a bad stumble by Mr. Biden in the debate on Thursday or on the trail; court rulings or Republican tactics that suppress the Democratic vote; and a G.O.P. ground game that turns out voters who may not have been counted by pollsters.”

“And Mr. Trump will need to bring discipline to the campaign trail that has so far eluded him, the strategists say. That will mean presenting a forceful and uncluttered appeal that he is better able than Mr. Biden to rebuild the economy, while trying yet again to draw a contrast between himself and an opponent he has sought to portray as ideologically too far to the left to run the nation.”