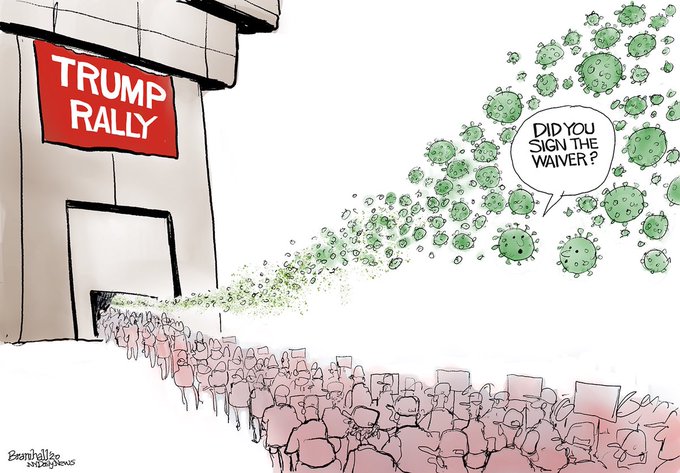 President Trump called on Attorney General William Barr to immediately launch an investigation of Joe Biden and his son Hunter, effectively demanding that the Justice Department muddy his political opponent and abandon its historic resistance to getting involved in elections, the APreports.

President Trump called for House Intelligence Committee Chairman Adam Schiff (D-CA) to be “put away” for saying the Hunter Biden laptop stories are part of a smear campaign that originated as part of Russian disinformation, the Daily Beast reports.

Said Trump: “It’s just crazy. I saw Shifty Schiff get up yesterday and say this is Russia. He’s a sick man. He is so sick. We went through two and a half years of that, plus. This guy, he ought to be put away, or he ought to be, you know, something should happen with him.”

Apparently there was some drama while President Trump was taping his 60 Minutes interview today, CNN reports. He abruptly ended his solo interview after around 45 minutes and did not return for a scheduled walk and talk he was supposed to tape with Vice President Mike Pence.

President Trump tweeted that he would post his interview with Lesley Stahl of 60 Minutes — which he abruptly cut short — before it airs on Sunday night. He called the interview “fake” and “biased” while adding “everyone should compare this terrible Electoral Intrusion with the recent interviews of Sleepy Joe Biden!”

More than 50 former senior intelligence officials have signed on to a letteroutlining their belief that the recent disclosure of emails allegedly belonging to Joe Biden’s son “has all the classic earmarks of a Russian information operation,” Politico reports.

Rudy Giuliani told a North Dakota radio station that the American public deserved to the story based off material from Hunter Biden’s laptop “even if it isn’t accurate.”

Said Giuliani: “They’ve set up an Iron Curtain so you can’t get out the New York Post story which I happened to know is 100 percent accurate. But even if it isn’t accurate, the American people are entitled to know it.”

New York Times: “Though there has been little public polling, there is growing anecdotal evidence that QAnon followers now make up a small but significant minority of Republicans… The phenomenon can be seen at Trump rallies, where people wearing QAnon shirts and hats are commonplace.”

A new Yahoo News/YouGov poll finds that 50% of President Trump’s supporters think that Democrats are involved in elite child sex-trafficking rings, while 33% aren’t sure.

“Senate Majority Leader Mitch McConnell (R-KY) told Senate Republicans that he has warned the White House not to make a big stimulus deal before the election,” the Washington Post reports.

“McConnell suggested that House Speaker Nancy Pelosi (D-CA) is not negotiating in good faith with Treasury Secretary Steven Mnuchin, and any deal they reach could disrupt the Senate’s plans to confirm Amy Coney Barrett to the Supreme Court next week.”

New York Times: “Mr. McConnell’s counsel threw cold water on Mr. Trump’s increasingly urgent push to enact a fresh round of pandemic aid before he faces voters on Nov. 3. It underscored the divisions within the party that have long hampered a compromise.”

Said Schumer: “I’ve had a long and serious talk with Senator Feinstein. That’s all I’m going to say about it right now.”

“The coronavirus pandemic has left about 285,000 more people dead in the United States than would be expected in a typical year, two-thirds of them from covid-19 itself and the rest from other causes,” the Washington Post reports.

“The CDC said the novel coronavirus, which causes covid-19, has taken a disproportionate toll on Latinos and Blacks, as previous analyses have noted. But the CDC also found, surprisingly, that it has struck 25- to 44-year-olds very hard: Their ‘excess death’ rate is up 26.5 percent over previous years, the largest change for any age group.”

South Dakota Speaker of the House Steve Haugaard (R) told the Sioux Falls Argus Leader that he spent the last two weeks dealing with a severe case of the coronavirus that’s infected thousands of South Dakotans in recent months.

Said Haugaard: “It’s been the most devastating stuff I’ve ever had in my life.”

“The new measures, announced on Monday, are a dramatic U-turn for the government, which just two weeks ago fell short of imposing the highest level of restrictions despite advice from public health experts.”

White House chief of staff Mark Meadows told a federal court that President Trump didn’t mean it when he tweeted that he was ordering the declassification of all Russia-probe documents, Politico reports.

“Klain was Biden’s vice presidential chief of staff and played a leading role in the Obama administration’s economic recovery and the Ebola crisis response.”

“Lawyers appointed by a federal judge to identify migrant families who were separated by the Trump administration say they have yet to track down the parents of 545 children, and that approximately two-thirds of those parents were deported to Central America without their children,” NBC News reports.

Sen. John Cornyn (R-TX) told the Fort Worth Star Telegram that at times he has disagreed with President Trump on issues such as budget deficits and debt, tariffs and trade agreements and border security.

But he said he chose to work on those disagreements with the president’s staff in private discussions, rather than by publicly voicing his opposition.

Cornyn described his relationship with Trump as “maybe like a lot of women who get married and think they’re going to change their spouse, and that doesn’t usually work out very well.”

Rush Limbaugh told listeners that he often feels that he’s under “a death sentence” while battling stage 4 lung cancer, with the conservative radio talk show host sharing that recent scans showed “some progression,” The Hill reports.

Said Limbaugh: “It’s tough to realize that the days where I do not think I’m under a death sentence are over. We all know that we’re going to die at some point, but when you have a terminal disease diagnosis that has a time frame to it, then that puts a different psychological and even physical awareness to it.”

Daily Yonder: “Covid-19 spread in rural America at a record-breaking pace again last week, adding 160 counties to the red-zone list and bringing the total number of rural Americans who have tested positive for the coronavirus to more than 1 million.”

“Nearly 70% of the nation’s 1,976 rural (nonmetropolitan) counties are now in the red zone, a term used by the White House Coronavirus Task Force to designate localities where the spread of the virus is out of control.”

Exxon Mobil issued a clarification after President Trump claimed he could easily call on the oil company’s CEO for a large campaign donation at any time, Marketwatch reports.

Having been made aware of Trump’s comments, the company said the call “never happened.”