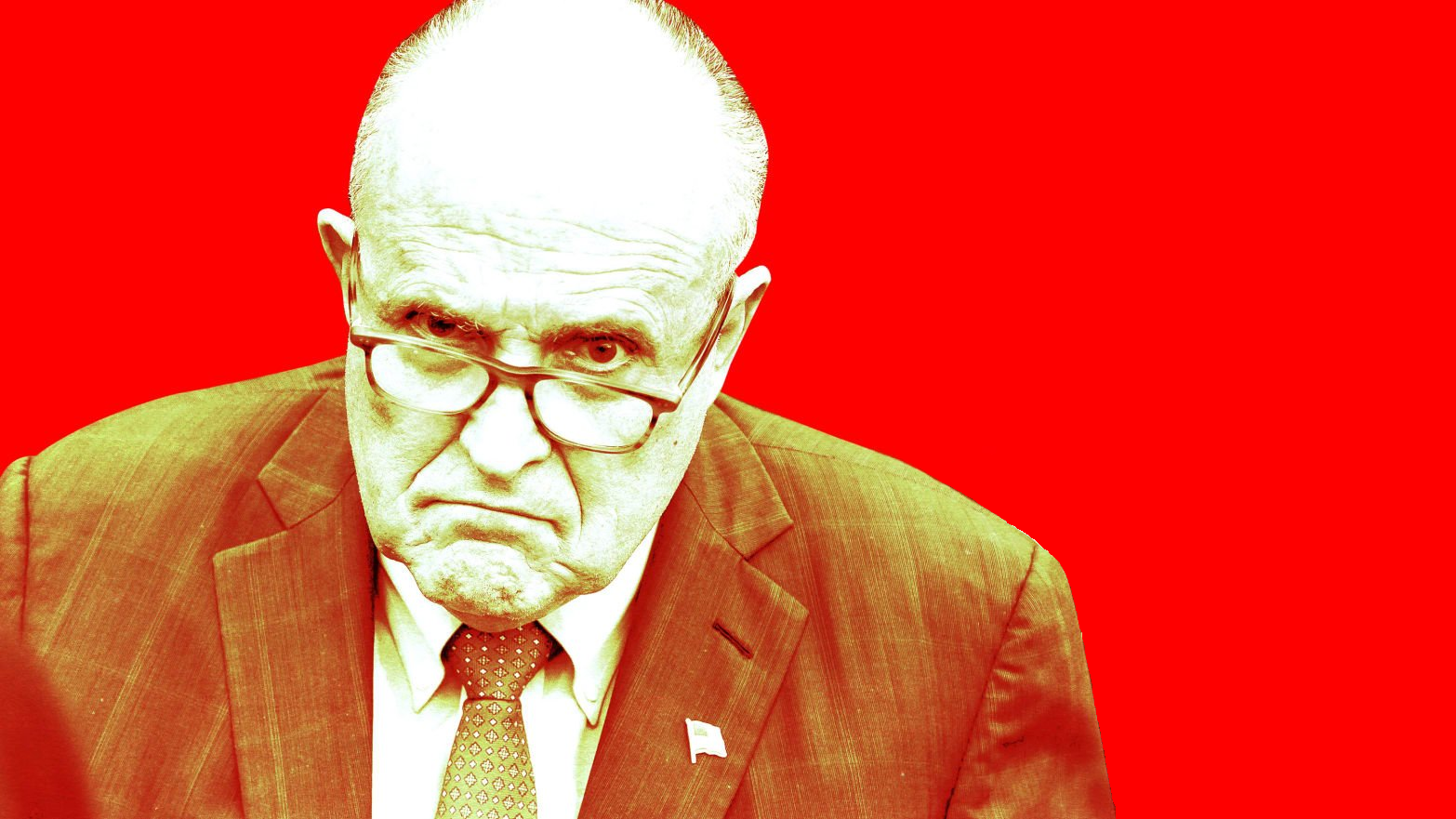 “The warnings were based on multiple sources, including intercepted communications, that showed Giuliani was interacting with people tied to Russian intelligence during a December 2019 trip to Ukraine, where he was gathering information that he thought would expose corrupt acts by former vice president Joe Biden and his son Hunter.”

“The intelligence raised concerns that Giuliani was being used to feed Russian misinformation to the president, the former officials said, speaking on the condition of anonymity to discuss sensitive information and conversations.”

“Republicans are confident a vote confirming Amy Coney Barrett to the the Supreme Court is only days away, but Democrats are looking farther ahead and warning that this swift process on the eve of an election won’t be quickly forgotten,” NBC News reports.

Said Sen. Sheldon Whitehouse: “The rule of ‘because we can,’ which is the rule that is being applied today, is one that leads away from a lot of the traditions and commitments and values that the Senate has long embodied.”

He added: “Don’t think that when you have established the rule of ‘because we can’ that should the shoe be on the other foot that you will have any credibility to come to us and say, yeah, I know you can do that but you shouldn’t because of X, Y, Z. Your credibility to make that argument in the future will die in this room and on that Senate floor if you continue to proceed in this way.”

Former Gov. Chris Christie (R), who was recently battling a coronavirus infection, told the New York Times that he was “wrong” not to wear a mask at an event honoring Judge Amy Coney Barrett and in his debate preparation sessions with President Trump, and that people should take the threat of the virus seriously.

“Christie said that he had believed he was in a “safe zone” at the White House while he was there.”

“He urged people to follow best practices, like mask wearing and social distancing, but argued there’s a middle ground between extensive, large-scale shutdowns and reopening cities and states without taking proper precautions.”

“Elliott Broidy, a former top political fundraiser for President Trump and the Republican Party, plans to plead guilty to participating in an illegal foreign lobbying scheme and cooperate with investigators in the matter,” Bloomberg reports.

Rep. Roger Williams (R-TX), a member of the House Financial Services Committee, used his powerful post in Congress to try to help a top donor in his dealings with a publicly traded bank, the Houston Chronicle reports.

“The controversy spilled out into a Texas bankruptcy case after Williams tried to broker a meeting between the wealthy donor — oil field investor Gary Martin of Marble Falls — and the CEO of UMB Financial Corp., which owns UMB Bank. The bank’s lawyer voiced objections to the ‘pressure’ tactic and UMB ultimately declined to set up a meeting.”

Frank Rich: “His opponent is the coronavirus. He is flailing against a pandemic that is now surging as it hasn’t since late July, and especially so in regions (the South, the upper Midwest) considered his electoral strongholds. The Biden campaign has wisely never lost its focus on Trump’s cataclysmic failure to address the crisis. But even if it had, the morbid facts speak for themselves. The ever-replayed video of the White House gleefully playing host to a super-spreader event is our era’s Zapruder film.”

“Trump wants to change the subject, but he can’t.”

“The debate is not going to be, ‘Ben Sasse, why were you so mean to Donald Trump?’ It’s going to be, ‘What the heck were any of us thinking, that selling a TV-obsessed, narcissistic individual to the American people was a good idea? We are staring down the barrel of a blue tsunami.” — Sen. Ben Sasse (R-NE), according to audio of a phone call with supporters obtained by the Washington Examiner.

Washington Post: “Four years ago, some Republicans who said unsavory things during the campaign about the new president worried that such remarks might ruin their chances of redemption via employment in the Trump administration.”

“Today, some of those same Republicans are now quietly on the job hunt as President Trump’s standing in the polls continues to slide against Democratic nominee Joe Biden with decision time in just 18 days. But now, these GOPers are hoping the Trump presidency isn’t a disqualifying blemish on their resumes or Google footprint as the door revolves the other way and they seek to land, once again, in the private sector.”

President Trump refused to disavow QAnon during an NBC News town hall, saying he knows nothing about it beyond that supporters of the theory are “strongly against pedophilia,” The Hill reports. Said Trump: “I know nothing about QAnon. I know very little. You told me but what you tell me doesn’t necessarily make it fact. I hate to say that.”

Politico: “At the edge of his seat at his town hall in Miami, Donald Trump refused to disavow QAnon, the far-right conspiracy theory, and sidestepped questions about his coronavirus tests. On a more sober, distant stage in Philadelphia, Biden criticized Trump’s response to the pandemic and discussed the intricacies of racial injustice.”

“Each candidate played to type. Biden put in a workmanlike performance — steady, low-key, sometimes meandering. Trump was his usual combative self — occasionally to his own detriment, but hard to turn away from. In the end, nothing happened that’s likely to change the race. So, advantage Biden.”

Dan Balz: “President Trump had an opportunity at a town hall forum Thursday night in Miami to begin to turn around his struggling candidacy. Instead, under pointed questioning from the moderator, he reverted to the confrontational style that delights his most loyal supporters but that has left him in a deficit position in his campaign against former vice president Joe Biden.”

Deadline: “Donald Trump may have been twirling like a rabid squirrel over on NBC, but on the unique night in America’s challenged democracy, Joe Biden’s town hall on ABC was a display of a candidate in control of himself, the facts, the Constitution, and plans for the future.”

British prime minister Boris Johnson “is expected to try to force Brexit trade talks to a moment of crisis, amid claims in London that Brussels is dragging its feet by insisting that future concessions must come from the British side,” the Financial Times reports.

The Times of London says Johnson said that the time had come to “get us all ready” for a no-deal Brexit, which he insisted would allow Britain to “prosper mightily as an independent free-trading nation.”

Confirmed coronavirus cases and deaths are on the rise in the swing states of Iowa, Michigan, Minnesota, Pennsylvania, Ohio and Wisconsin, the AP reports.

Politico: “The coronavirus is engulfing big city hospitals in states including Utah, Wisconsin and Indiana that are running low on nurses and beds and are being forced to set up overflow facilities. With new daily U.S. cases surpassing 62,000 on Thursday, the prospect of swamped intensive care units is prompting some governors who previously resisted public health orders to weigh new restrictions to ease pressure on their health care systems.”

“From the early days of the pandemic, the availability of ICU beds — and hospitals’ ability to treat people who need life-support equipment like ventilators to breathe — has been an important benchmark for whether local health systems can handle outbreaks.”

“The pandemic is spawning new infections at a rate not seen since the end of July. Hot spots began to cluster in parts of Utah, Indiana, Wisconsin, Oklahoma, Wyoming, Missouri, Mississippi and North Dakota as the nationwide average number of daily new cases surged over the past month.”

“The pandemic has come storming back to Europe, and hope of a return to normality is being replaced by a much more ominous prospect: the return to lockdown,” Axios reports.

“Case counts in countries like France and Spain have skyrocketed past the numbers seen during the spring peak. While that’s partially due to more widespread testing, it’s now clear that deaths are climbing too.”

Playbook: “Today is the one-year anniversary of the last time President Trump spoke with Speaker Nancy Pelosi . We’re living through the most difficult year in most of our lifetimes, and the president of the United States and the speaker of the House have not even had so much as a conversation in 2020.”

No aspect of Donald Trump’s business has been the subject of more speculation than his debt load. Lots of people believe the president owes $400 million, especially after Trump seemed to agree with that figure on national television Thursday night. In reality, however, he owes more than $1 billion,” Forbes reports.

“The Supreme Court announced Friday that it will review President Trump’s attempt to exclude undocumented immigrants when calculating how congressional seats are apportioned among the states,” the Washington Post reports.  “The unprecedented proposal would have the effect of shifting both political power and federal funds away from urban states with large immigrant populations and toward rural and more Republican interests.”

“The Trump administration earlier Friday declined to issue an emergency declaration for California that would make hundreds of millions of dollars in federal funding available for areas devastated by the Creek Fire and five others,” the Washington Post reports.   “But President Trump reversed the decision a few hours later after a direct appeal from Gov. Gavin Newsom (D) in a midday phone call.”

“Pfizer’s chief executive said on Friday that the company would not apply for emergency authorization of its coronavirus vaccine before the third week of November, ruling out President Trump’s assertion that a vaccine would be ready before Election Day on Nov. 3,” the New York Times reports.

“The Trump White House has installed two political operatives at the nation’s top public health agency to try to control the information it releases about the coronavirus pandemic as the administration seeks to paint a positive outlook, sometimes at odds with the scientific evidence,” the AP reports.