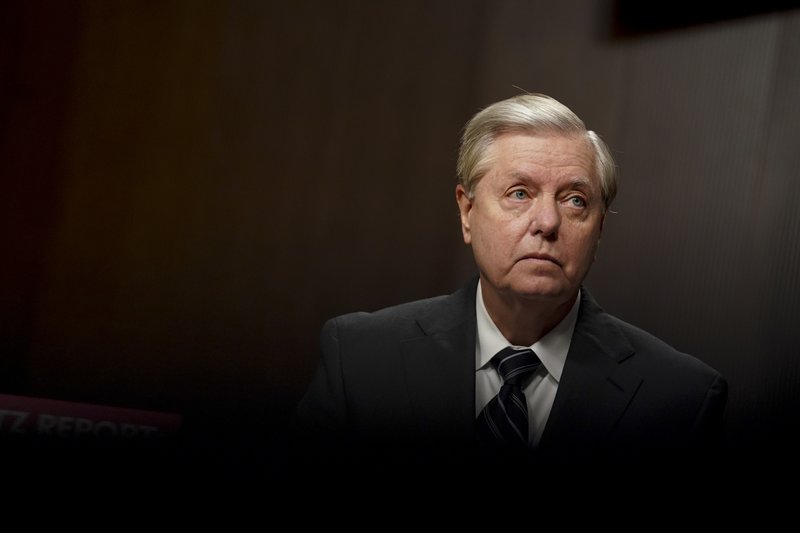 Senate Majority Leader Mitch McConnell said Judge Amy Coney Barrett has enough support to win Senate confirmation to the Supreme Court and he expects to bring her nomination to the floor on October 23, Bloomberg reports. Said McConnell: “We have the votes.” This was after the soon to be former Senator Lindsey Graham broke Judiciary Committee rules and scheduled a vote for the nomination on Tuesday, October 22.

New York Times: “The number of new coronavirus cases in the United States is surging once again after growth slowed in late summer. While the geography of the pandemic is now shifting to the Midwest and to more rural areas, cases are trending upward in most states, many of which are setting weekly records for new cases.”

New York Times: “The consultant’s assessment quickly spread through parts of the investment world. U.S. stocks were already spiraling because of a warning from a federal public health official that the virus was likely to spread, but traders spotted the immediate significance: The president’s aides appeared to be giving wealthy party donors an early warning of a potentially impactful contagion at a time when Mr. Trump was publicly insisting that the threat was nonexistent.”

“Interviews with eight people who either received copies of the memo or were briefed on aspects of it as it spread among investors in New York and elsewhere provide a glimpse of how elite traders had access to information from the administration that helped them gain financial advantage during a chaotic three days when global markets were teetering.”

President Trump told Fox Business on Thursday that he’s tested for the coronavirus “a lot,” but “not every day.”

Said Mnuchin: “That issue is getting overblown. We’ve agreed to $178 billion overall for health. It’s an extraordinary amount of money. We’d agreed with the Democrats with $75 billion going to testing, contact tracing.”

He added: “What we have been focused on is the language around testing. When I speak to Pelosi today, I’m going to tell her that we’re not going to let the testing issue stand in the way. We’ll fundamentally agree with their testing language subject to some minor issues. This issue is being overblown.”

Jonathan Bernstein: “I hate to get too speculative about 2021, but in this case it’s necessary. Because the flaw in Republican reasoning, if this is what they intend, is that the most likely justification for Senate Democrats to use the ‘nuclear option’ and eliminate the legislative filibuster would be the scenario that Republicans seem to be setting up: a deep recession, only minimal stimulus since March 2020 and incoming Democratic majorities unable to provide further relief because of Republican rejectionism. Faced with the choice of procedural complaints if they act, or the possibility of economic (and perhaps political) disaster if they don’t, Democrats might have the votes to go nuclear even if they have the slimmest of majorities.”

“In other words, too much rejectionism might backfire badly. There’s a lengthy agenda of Democratic policy preferences that might have the votes in a simple-majority Senate but that don’t have the urgency, especially among moderates, to push the party to go nuclear. After eliminating the filibuster, many of those items might well pass. Meanwhile, without the need to attract Republicans, a partisan stimulus might be very large, and very effective. Especially if it coincided with large-scale distribution of a vaccine.”

New York Times: “With polls showing the president behind Mr. Biden nationally and in key states, Mr. Trump has descended into rants about perceived enemies, both inside and outside his administration, triggering in his staunchest supporters such fears for the outcome — possibly a ‘stolen’ election, maybe a coup by the far left — that he is emboldening them to disrupt the voting process.”

“The farther behind Donald Trump has fallen in the competition for campaign dollars, the more he’s milked government resources to make up the difference,” Politico reports.

“Millions of boxes of food doled out to needy families — with letters signed by the president taking credit stuffed inside. An $8 billion program for drug-discount cards to seniors featuring Trump branding — intended to arrive before the Nov. 3 election. A $300 million advertising blitz to ‘defeat despair’ over the coronavirus pandemic — the biggest threat to Trump’s reelection.”

“His heavy reliance on federal resources and his own executive powers to win reelection come as Trump has fallen more than $100 million behind Joe Biden in TV ad spending, and slipped to a double-digit deficit in national polls.”

Following revelations about the outsized role The Apprentice played in Trump’s reinvention, The Hollywood Reporter talked to former NBC insiders who provide new detail on his brazen demands (including large donations to his ill-fated foundation) and the way the network enabled him: “We had to build all kinds of systems with producers to make sure the show stayed on the rails. He was the perfect character: unfiltered stream of consciousness, crazy, well-edited to appear cohesive.”

“The number of new applications for unemployment benefits rose last week to the highest level since late August, as persistent layoffs hold back the economic recovery,” the Wall Street Journal reports.

Senate Majority Leader Mitch McConnell (R-KY) called out Democrats for not ruling out the prospect of their party adding more seats to the Supreme Court if Joe Biden wins the White House and they capture the Senate, The Hill reports.

Said McConnell: “It is bizarre to watch Vice President Biden and other Democrats refuse to give a straight answer on their own party’s threats to pack the Supreme Court.”

“Maybe I should’ve seen this coming, but like many of my colleagues, I fervently hoped that Attorney General William Barr’s preemptive misrepresentation of special counsel Robert Mueller’s report was an honest mistake or a solitary misstep — rather than a deliberate attempt to conceal potential presidential misconduct. After all, Barr has never actually investigated, charged or tried a case. He’s a well-trained bureaucrat but has no actual experience as a prosecutor.”

“Unfortunately, over the last year, Barr’s resentment toward rule-of-law prosecutors became increasingly difficult to ignore, as did his slavish obedience to Donald Trump’s will in his selective meddling with the criminal justice system in the Paul Manafort, Michael Flynn and Roger Stone cases. In each of these cases, Barr overruled career prosecutors in order to assist the president’s associates and/or friends, who potentially harbor incriminating information. This career bureaucrat seems determined to turn our democracy into an autocracy.”

Federal investigators are examining whether the emails allegedly describing activities by Joe Biden and his son Hunter and found on a laptop at a Delaware repair shop are linked to a foreign intelligence operation, NBC News reports.

The FBI seized the laptop and a hard drive through a grand jury subpoena.

Brian and Eddie Krassenstein explain how the Hunter Biden emails supposedly recovered from an abandoned laptop computer by the New York Post appear to be forged.

“In 2016, hacked emails and foreign meddling shaped the political fight, and social media took much of the blame. Afterwards, the platforms designed circuit breakers to avoid a repeat in 2020,” Axios reports.

“Those breakers tripped Wednesday at both Facebook and Twitter to stop the spread of a New York Post story that reported allegations about Joe Biden’s son Hunter, based on what the paper said were emails provided to it Sunday by Rudy Giuliani.”

“The action by the platforms drew a swift backlash from conservatives — with the ironic result of drawing more attention to the material.”

As Jonathan Swan notes, “content obtained without authorization” is a hilarious standard that seemingly nobody at Twitter has spent any time thinking through.

The Senate Judiciary Committee plans to issue a subpoena to Twitter Chief Executive Jack Dorsey after the social-media company blocked a pair of New York Post articles that made new allegations about Joe Biden, which his campaign has denied, the Wall Street Journal reports.

“The subpoena would require the Twitter executive to testify on Oct. 23 before the committee, according to the Republicans who announced the hearing. Republicans are singling out Twitter because it blocked a pair of stories the Post said were based on email exchanges with Hunter Biden, the Democratic candidate’s son, that were provided by allies of President Trump.”

Secret recordings of a militant neo-Nazi group show it has targeted former and active-duty U.S. military personnel to join its ranks and prepare for what it believes is society’s imminent collapse, NBC News reports.

Richard North Patterson: “It is barely possible now to imagine the GOP had Trump been different. He came without ideology, propelled by a gift for embodying a potent but undefined populism. He might have become an agent of constructive reinvention, eschewing racism and xenophobia in favor of offering embattled middle-class and blue-collar workers genuine economic uplift. He could have reinstated fiscal responsibility by disdaining tax cuts for the wealthy. He might even have taken steps—if not to drain the swamp—at least to reform it.”

“But that would have required real talent, sustained attention, and a genuine interest in governance. Instead this irredeemably vicious, vacant, and narcissistic demagogue unleashed white identity politics and the endless overreach of Republican donors. This leads inexorably to the deadest of ends—a demographic death knell for his party and, for our democracy, the most grievous of wounds.”

Said Trump: “We sent in the US Marshals, took 15 minutes and it was over… They knew who he was, they didn’t want to arrest him and 15 minutes that ended.”

Sen. Ben Sasse (R-NE), in a private call with constituents, excoriated President Trump, saying he had mishandled the coronavirus response, “kisses dictators’ butts,” “sells out our allies,” spends “like a drunken sailor,” mistreats women, and trash-talks evangelicals behind their backs, the Washington Examiner reports.

He added that Trump has “flirted with white supremacists” and his family “treated the presidency like a business opportunity.”

Barack Obama told Pod Save America that President Trump is responsible for the rapid spread of false information on social media.

Said Obama: “Social media, media infrastructure, the conservative media infrastructure. We’ve had this conversation before. That is a problem that is going to outlast Trump. Trump is a symptom of it and an accelerant to it. It has gotten turbocharged because of social media. And because the head of our government, of our federal government has resorted to it.”