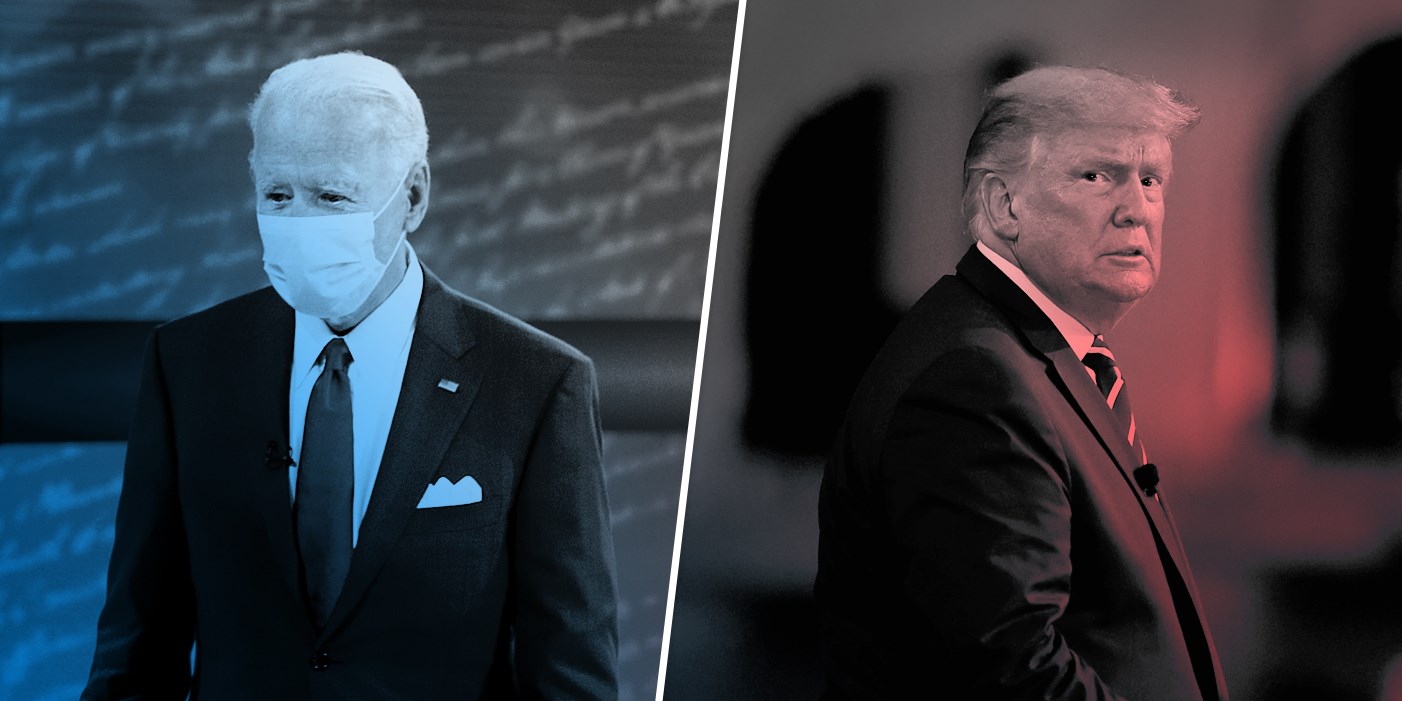 “Democratic candidates and left-leaning groups raised $1.5 billion through ActBlue over the last three months — a record-smashing total that reveals the overwhelming financial power small-dollar donors have unleashed up and down the ballot ahead of the 2020 election,” Politico reports.

“Joe Biden announced Wednesday evening that his campaign and affiliated committees raised $383 million in September, breaking a record he had just set the prior month as his campaign continues to ride a surge of online donations,” Politico reports.

“Biden, the Democratic National Committee and the campaign’s joint fundraising committees started the final 34 days of the campaign with $432 million in the bank.”

A new Wall Street Journal/NBC News poll of registered voters finds Joe Biden leading Donald Trump, 53% to 42%. “The poll holds warning signs for Republicans down-ballot, as well. Democrats came out ahead of Republicans by 8 points when voters were asked which party they planned to support for Congress.”

I agree. I didn’t get the outrage at NBC. Trump is not the best salesman for himself. The comparison between the two town halls would not be good for him. So I am not mad at NBC for giving Trump the rope to hang himself with.

Politico: “By targeting Trump voters who don’t typically vote in a midterm, Brian Kemp improved on Trump’s 2016 margins by about 2 points across all rural counties, suggesting there’s room for Trump to grow in Georgia.”

“Democrats believe they bottomed out with rural voters in 2016, when Hillary Clinton lost them overwhelmingly.”

“In private, some top Democrats remain nervous about the presidential race, despite Joe Biden’s lead in swing state after swing state — and strength in states that had looked out of reach (including Georgia, Ohio and Iowa),” Axios reports.

Tom Edsall points to a massive surge in registration for working-class whites and quotes a Democratic strategist who reported that white, non-college, over-30 registrations in battleground states had recently “increased by 10 points compared to September 2016, and the Democratic margin dropped 10 points to just six points.”

Biden campaign manager Jen O’Malley Dillon on Twitter: “Early voting is already underway in many states. Millions of voters have already cast their ballots. But there is still a long way to go in this campaign, and we think this race is far closer than folks on this website think. Like a lot closer.”

I think this is all to get us not to be complacent. Which is good.

“With less than three weeks to go before Nov. 3, more than 14 million Americans have already voted in the fall election, reflecting an extraordinary level of participation despite barriers erected by the coronavirus pandemic — and setting a trajectory that could result in the majority of voters casting ballots before Election Day for the first time in U.S. history,” the Washington Post reports.

“The picture is so stark that election officials around the country are reporting record early turnout, much of it in person, meaning that more results could be available on election night than previously thought.”

“So far, much of the early voting appears to be driven by heightened enthusiasm among Democrats. Of the roughly 3.5 million voters who have cast ballots in six states that provide partisan breakdowns, registered Democrats outnumber Republicans by roughly 2 to 1, according to a Washington Post analysis of data in Florida, Iowa, Maine, Kentucky, North Carolina and Pennsylvania.”

Politico: “In Arizona as elsewhere, Trump’s handling of the pandemic — even prior to his diagnosis — is proving costly, leaving him struggling to match his 2016 performance among those over the age of 65. October polling shows Biden is chipping away at Trump’s support among older white voters, especially among the once reliably Republican senior population in populous Maricopa County.”

“Despite Biden’s gains among senior voters, some Republicans argue the race is far closer than the polls suggest and are optimistic about Trump’s chances of eking out a win.”

“Over the last four years President Trump has seeded the narrative that the 2020 election would be rigged. Those efforts look set to pay off,” NBC News reports.

“A sizable online network built around the president is poised to amplify any claims from Trump about a rigged election, adding reach and enthusiasm that could lend a veneer of legitimacy to otherwise evidence-free allegations.”

“Multiple social media analyses… have detailed how a collection of the president’s relatives and members of his inner circle, along with far-right media manipulators and an online army of disciples, has created or spread false or misleading content that supports his ‘rigged’ narrative, while his campaign is urging supporters to join an ‘army’ and ‘defend their vote.’”

“The California Republican Party said Wednesday it will not comply with the state’s cease-and-desist order over unofficial ballot drop boxes placed in at least four counties, escalating a brewing political showdown ahead of the November election,” CNN reports.

“The unauthorized ballot boxes, which state officials have called illegal, have been found in at least four counties across the state: Los Angeles, Ventura, Orange and Fresno.”

Sen. Kamala Harris told Rachel Maddow that she did notice the fly that landed on Vice President Mike Pence’s head during the vice presidential debate.

The AP notes Harris was scheduled to travel Thursday to North Carolina for events encouraging voters to cast early ballots.

Massachusetts Gov. Charlie Baker (R) told the Boston Globe he will not be supporting President Trump in the election.

“The Australian-born billionaire is disgusted by Trump’s handling of COVID-19, remarking that the president is his own worst enemy, that he is not listening to advice about how best to handle the pandemic, and that he’s creating a never-ending crisis for his administration.”

“If Joe Biden wins the presidency, his advisers plan to assemble the most diverse Cabinet in U.S. history as he works to fulfill a pledge to build the Democratic Party on a new generation of leaders,” Axios reports.

“Many of Biden’s longtime aides, most of whom are white and male, are expected to follow him to the West Wing. That means the pressure will be on to recruit a Cabinet that’s both younger and more diverse.”

BUT… Politico: “Joe Biden’s transition team has a message for anyone publicly jockeying for a job in a potential Biden administration: Knock it off. Members of the transition team have been fuming at the recent flood of stories listing people in contention for the top spots should Biden win the presidential race next month, according to Democratic officials who have spoken to them. They warn that the efforts could backfire, knocking those participating out of contention for high-profile posts.”

Said a Democratic strategist: “There is speculation with every transition, but public campaigning for administration jobs during an election of this magnitude is tone-deaf. The only campaigning folks should be doing is for Biden, Harris, the Senate and candidates down the ballot who can help turn things around. Everything else is counterproductive.”

“It’s not clear that seeing more of the president is necessarily a help to his campaign.” — GOP pollster Whit Ayres, quoted by the New York Times.

“Less than three weeks before election day, President Trump’s lack of a consistent and coherent closing argument is alarming some Republicans, raising fears among his allies that his undisciplined approach to campaigning could render him a one-term president,” the Washington Post reports.