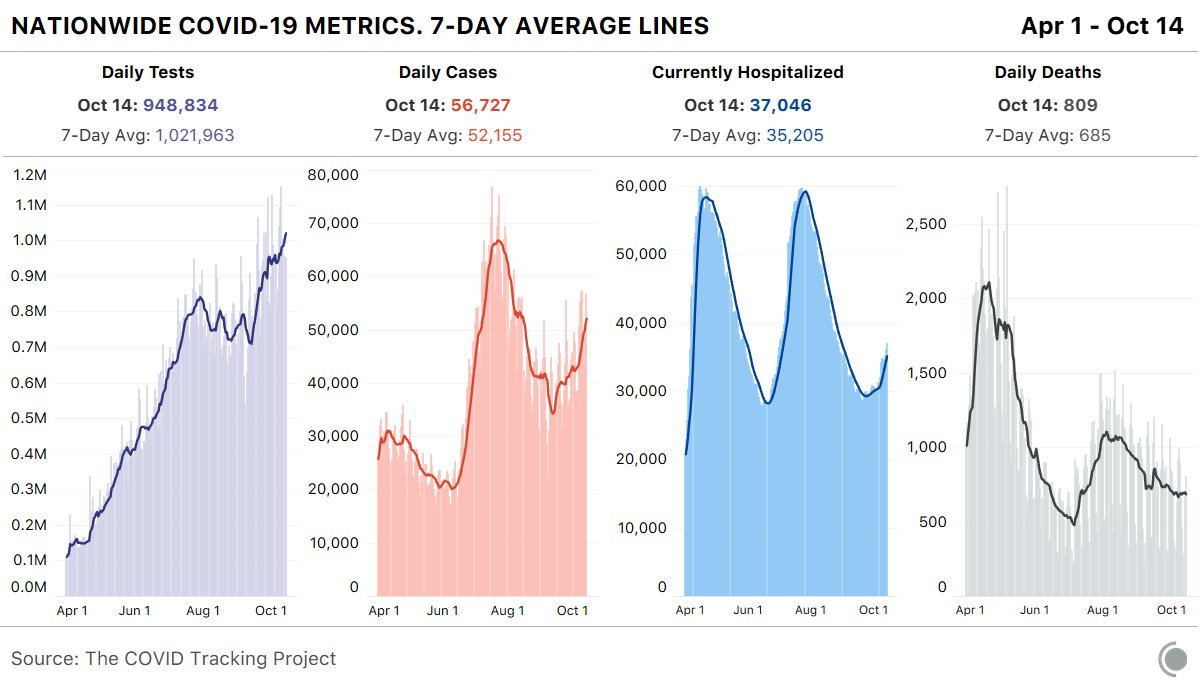 New York Times: “New cases are trending upward in 36 American states, pushing the country’s case curve to its highest level since August. Those states include much of the Northeast, which is starting to backslide after months of progress, the Midwest and Mountain West, where uncontrolled outbreaks have strained hospitals.”

“Hospital beds are filling with virus patients… Even as testing remains insufficient in much of the country, sixteen states each added more new cases in the seven-day period ending Monday than they had in any other weeklong stretch of the pandemic. North Dakota and South Dakota are reporting more new cases per person than any state has previously.”

“Facing a steep surge in coronavirus cases, health officials in Minnesota have connected two dozen virus cases to people who attended presidential campaign events in the past month, most of them attendees at airport rallies hosted by President Trump,” the New York Times reports.

“The White House has embraced a declaration by a group of scientists arguing that authorities should allow the coronavirus to spread among young healthy people while protecting the elderly and the vulnerable — an approach that would rely on arriving at ‘herd immunity’ through infections rather than a vaccine,” the New York Times reports.

Although the declaration’s website claims the petition has been signed by more than 15,000 scientists, Sky News found reports dozens of fake names on the list of signatories, including Dr. I.P. Freely, Dr. Person Fakename, and Dr. Johnny Bananas.

“The federal prosecutor appointed by Attorney General William Barr to review whether Obama-era officials improperly requested the identities of individuals whose names were redacted in intelligence documents has completed his work without finding any substantive wrongdoing,” the Washington Post reports.

President Trump offered a “no comment” to Newsmax on whether he plans to keep Attorney General William Barr should he win a second term. Said Trump: “I have no comment. Can’t comment on that. It’s too early. I’m not happy with all of the evidence I have, I can tell you that. I’m not happy.”

Secretary of State Michael Pompeo said the State Department is doing “everything we can” to release additional emails from Hillary Clinton’s tenure as the top U.S. diplomat, reaffirming a vow he made after President Trump criticized him for not doing more, Bloomberg reports.

Said Pompeo: “We’ll continue to do the right thing, we’ll make sure that all these emails get to the right place. We will do everything we can to make sure that the American people get a chance to see as much as we can equitably produce.”

At her Senate confirmation hearing for the Supreme Court, Judge Amy Coney Barrett wasn’t willing to acknowledge that the president can’t unilaterally delay an election.

Judge Barrett explained her belief in “originalism” at her Senate confirmation hearing: “That means that I interpret the Constitution as a law… I understand it to have the meaning that it had at the time people ratified it. That meaning doesn’t change over time and it’s not up to me to update it or infuse my policy views into it.”

Hillary Clinton: “At the time the Constitution was ratified, women couldn’t vote, much less be judges.”

FiveThirtyEight: “We can look to her track record on the 7th U.S. Circuit Court of Appeals, though, for clues. Barrett has served on that court for almost three years now, and two different analyses of her rulings point to the same conclusion: Barrett is one of the more conservative judges on the circuit — and maybe even the most conservative.”

At her Senate confirmation hearings for the Supreme Court, Judge Amy Coney Barrett would not say whether she believed President Trump should be able to pardon himself as president.

Barrett said that question had never been litigated and thus called for “legal analysis” about the scope of the pardon power.

Bloomberg: “A GOP strategist who has been consulting with Senate campaigns said Republicans have been carefully laying the groundwork to restrain a Biden administration on federal spending and the budget deficit by talking up concerns about the price tag for another round of virus relief.”

“The thinking, the strategist said, is that it would be very hard politically to agree on spending trillions more now and then in January suddenly embrace fiscal restraint.”

Greg Sargent: How Republicans will try to destroy a Biden presidency.

“President Trump’s plan to send 33 million Medicare beneficiaries a card that can be used to help pay for as much as $200 in prescription drug costs won’t be completed until after the election,” the Wall Street Journal reports.

Attorneys from the Department of Justice argued in court that President Trump’s tweets authorizing the “total declassification of any & all documents” related to the Russia investigation and Hillary Clinton’s emails should not be considered real declassification orders, Axios reports.

The Supreme Court let the Trump administration end the census count more than two weeks early, dealing a blow to civil rights groups that said minorities will be undercounted as a result, Bloomberg reports.

“President Trump is considering a sweeping foreign policy speech in advance of the Nov. 3 election and has been pressing members of his national security team to accelerate specific initiatives that he could highlight in his remarks, such as U.S. troop withdrawal in Afghanistan,” NBC News reports.

Sen. John Cornyn (R-TX) shared a 2018 photo of a group of Democratic senators and questioned why they were not wearing masks, The Hill reports. Many social media users quickly pointed out the photograph was taken before the coronavirus pandemic, with some accusing Cornyn of spreading disinformation.

“Both Eugene and Trish Scalia attended the Rose Garden event where President Donald Trump announced Judge Amy Coney Barrett was his pick to replace Justice Ruth Bader Ginsburg on the Supreme Court. They were seated in the second row, directly behind first lady Melania Trump and next to former White House counselor Kellyanne Conway — both of whom would later test positive for Covid-19.”

New York Times: “In the districts encompassing Baltimore, Chicago, Detroit and Washington, D.C., less than 75 percent of first-class mail was considered on time in the most recent data.”

Daily Beast: “After months of trying to avoid direct run-ins with the president, task force officials are no longer tiptoeing around his demands… With Trump increasingly turning to Scott Atlas for guidance, Deborah Birx, Anthony Fauci, and Robert Redfield have all been sidelined from the task force…”

“But as they’ve slipped away from the limelight, the trio and others have been more adamant in holding their ground on policy disputes. And for those who have been in the bureaucratic trenches at the intersection of politics and health policy, it’s been something of a pleasant surprise to see the absence of acquiescence.”

Russian disinformation and a deepfake video was channeled through Russian agent Rudy Giuliani and published in the New York Post this morning. There was outrage when two journalists, Maggie Haberman and Jake Sherman, retweeted the story, saying it raised “questions.” I will not link to it here, and questioned whether I should even bring it up, but then then I thought I should to show you all how full of holes and lies the story is.

So to recap: Hunter Biden introduced his father, then-Vice President Joe Biden, to a top executive at a Ukrainian energy firm less than a year before the elder Biden pressured government officials in Ukraine into firing a prosecutor who was investigating the company, according to e-mails obtained by The Post. The never-before-revealed meeting is mentioned in a message of appreciation that Vadym Pozharskyi, an adviser to the board of Burisma, allegedly sent Hunter Biden on April 17, 2015, about a year after Hunter joined the Burisma board at a reported salary of up to $50,000 a month. The emails and a sex video featuring Hunter Biden was found on a laptop with a Beau Biden sticker on it left at some unknown computer store here in Delaware. The unnamed owner of that store could not remember who left the computer but said it was not Hunter Biden. But then this store owner copied the contents of this computer and sent the info to Rudy Giuliani. Yeah, that’s not suspicious at all.

So first, the authenticity of the emails and videos are not established and would be tossed immediately in any court anywhere.

Second, even if the email was real, and the contents of it were true, they do not prove what the New York Post says. There’s nothing in the email that suggests Joe Biden ever met with a Burisma adviser. And if such a meeting did take place, it would be pretty easy to prove since it would be on the vice president’s schedule. Biden’s campaign today said such a meeting never took place, either officially or unofficially.

The Post story has quickly fallen apart and it was considered to be such an egregious example of Russian disinformation and of a deepfake that both Facebook and Twitter blocked it today.

Melania Trump writes that her 14-year-old son, Barron, also tested positive for the coronavirus earlier this month but had no symptoms. President Trump spent exactly one second commenting on Barron to reporters.

“For more than three years, federal prosecutors investigated whether money flowing through an Egyptian state-owned bank could have backed millions of dollars Donald Trump donated to his own campaign days before he won the 2016 election,” CNN reports.

“The investigation, which both predated and outlasted special counsel Robert Mueller’s probe, examined whether there was an illegal foreign campaign contribution. It represents one of the most prolonged efforts by federal investigators to understand the President’s foreign financial ties, and became a significant but hidden part of the special counsel’s pursuits.”

“The investigation was kept so secret that at one point investigators locked down an entire floor of a federal courthouse in Washington, DC, so Mueller’s team could fight for the Egyptian bank’s records in closed-door court proceedings following a grand jury subpoena. The probe, which closed this summer with no charges filed, has never before been described publicly.”