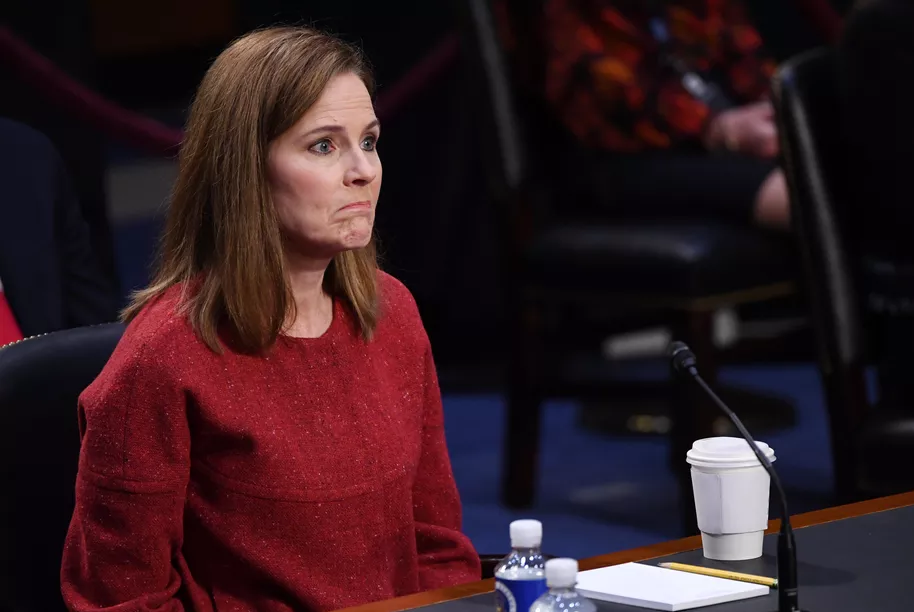 Vox: “Judge Amy Coney Barrett spent much of the first day of questions in her confirmation hearing invoking what’s known as the “Ginsburg rule” and refusing to provide a position on whether she agreed with past precedents. It’s an approach made famous by the late Justice Ruth Bader Ginsburg (though she actually spoke much more freely on some subjects) — and it provides little additional insight regarding Barrett’s positions on issues including reproductive rights and the Affordable Care Act (ACA).

Barrett did, however, comment more broadly. She noted that she was not “hostile” to the ACA, despite criticizing past decisions that upheld the law. She also said repeatedly that she did not have an “agenda” to overturn Planned Parenthood v. Casey, a 1992 decision that reaffirmed someone’s right to an abortion, though her past opinions signal an openness to limiting these rights.

“I’ve made no commitment to anyone about how I would decide any case,” Barrett emphasized, noting that President Donald Trump and his staffers had not discussed how she’d rule on specific cases — a concern many Democrats have highlighted given his previously stated promises to appoint anti-abortion nominees and judges who’d overturn the ACA.

Barrett also noted repeatedly that she adhered to the late Supreme Court Justice Antonin Scalia’s judicial philosophy of originalism, but emphasized that she’d bring her own perspective to the role. “If I were confirmed, you’d be getting Justice Barrett, not Justice Scalia,” she said.”

Sen. Sheldon Whitehouse (D-RI) was pretty effective reading back quotes from Sen. Ted Cruz (R-TX), Sen. Lindsey Graham (R-SC), and Sen. Mitch McConnell’s (R-KY) words against them in pushing to confirm a Supreme Court justice close to a presidential election. Said Whitehouse: “There is a lot of hard-to-explain hypocrisy and rush taking place.”

Judge Amy Coney Barrett testified before the Senate Judiciary Committee that she has never discussed with either President Trump or any other officials how she would vote on a pending case on the fate of the Affordable Care Act, the Washington Post reports. Said Barrett: “Absolutely not. I was never asked. And if I had been, that would have been a short conversation.” Barrett, speaking generally, added “no one ever talked about any case with me.”

Jonathan Chait: “Three weeks from now, President Trump will probably — probably — lose a reelection campaign to an opponent he has trailed consistently for three years. And he will probably — probably — lose by a large enough margin to moot any efforts to steal it by either legal or quasi-legal means. What lesson should we take from this, should it come to pass? Ross Douthat argues that it will vindicate the case he has been making all along, that Trump’s authoritarian threats have never amounted to anything serious.”

Writes Douthat: “Our weak, ranting, infected-by-Covid chief executive is not plotting a coup because a term like ‘plotting’ implies capabilities that he conspicuously lacks.”

“Douthat runs through various ways in which the bureaucracy has pushed back on some of his most unhinged demands, which certainly has occurred in several cases. But he omits any mention of the areas where Trump’s attack on democratic norms has succeeded. Most glaringly, his column does not make any reference to William Barr.”

Senate Majority Leader Mitch McConnell (R-KY) issued a statement saying that the Senate’s “first order of business” when it returns on October 19 will be to vote on “targeted relief for American workers,” including new funding for the small business Paycheck Protection Program.

Axios: “House Democrats, Senate Republicans and the Trump administration are still very far apart on key elements of a relief deal, and any push for smaller, more targeted legislation is more of a political maneuver than any thing else.”

“President Trump has told top advisers he wants to withdraw U.S. troops from Somalia, allowing him to make good on campaign pledges to bring soldiers home even though the country remains beset by al-Qaeda-linked insurgents,”  Bloomberg reports.

“The U.S. has about 700 troops in Somalia, according to the Congressional Research Service, mostly special forces troops who are helping train Somalia’s army. All or nearly all were sent during Trump’s presidency.”

Writes Cuomo: “Meadows said that they wanted the results from the tests on hydroxychloroquine. I told him, as I told the president, that the tests were being done by the hospitals and when they were complete they would be sent to the FDA. I didn’t know how long they took, but no one had any interest in causing undue delay.”

“Meadows then communicated to me that the federal government was about to send out funding for hospitals and strongly implied that if the tests weren’t completed, New York wouldn’t receive any funding.”

“The Justice Department on Tuesday sued the author of a book about first lady Melania Trump, claiming that the writer violated a non-disclosure agreement that barred her from revealing confidential information obtained during her work for the president’s wife,” CNBC reports.

Sen. Mitt Romney (R-UT) called on political leaders to tone down hateful rhetoric ahead of the election, arguing that the “rabid attacks kindle the conspiracy mongers and the haters” to take “dangerous action.”

Said Romney: “Leaders must tone it down. I’m troubled by our politics, as it has moved away from spirited debate to a vile, vituperative, hate-filled morass that is unbecoming of any free nation — let alone the birthplace of modern democracy.”

“President Trump asked the Supreme Court to block lower court decisions that would give the Manhattan District Attorney’s office access to years of his income tax returns,” CNBC reports. “Trump’s lawyers filed an emergency application with the Supreme Court asking the court to issue a stay on a grand jury subpoena demanding those tax returns and other financial records from his accountants.”

Eric Trump told supporters in Wisconsin that the first person who “came out to wish” his father President Trump well after contracting the novel coronavirus was “Little Rocket Man,” a reference to North Korean leader Kim Jong Un, the Milwaukee Journal Sentinel reports.

Palestinian Prime Minister Mohammad Shtayyeh said it will be disastrous for his people and the world at large if President Trump wins re-election next month, the AP reports. Said Shtayyeh: “If we are going to live another four years with President Trump, God help us, God help you and God help the whole world.”

“The Supreme Court on Tuesday declined to take up a case by 29 Senate Democrats who alleged that President Trump violated the Constitution’s Emoluments Clause, which prohibits self-dealing by federal officeholders,” The Hill reports.

“The donation, which follows a previous gift of $300 million for state and local governments to help fund U.S. elections, comes in the face of a lawsuits from a conservative legal group seeking to block the use of private funds for the state and local administration of elections, an expense that has historically been paid for by governments.

President Trump mocked the ratings of the NBA playoffs, suggesting fans don’t like the players criticizing him.

Ron Brownstein: “Trump, by attempting to brand them as unpopular for criticizing him, is essentially daring LeBron James and the other NBA stars to prove they can mobilize turnout and move persuasion among Black voters, and young voters generally, between now and Election Day.”