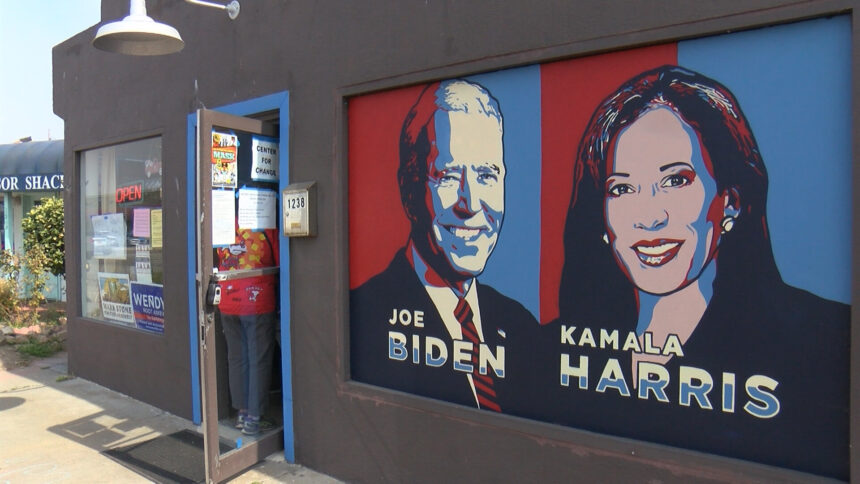 Donald Trump is doubling-down on the same unpopular message that gave Joe Biden his recent surge in the polls. In his latest super spreader events, Trump has claimed he’s immune to the virus, attacked Dr. Anthony Fauci and once again slammed lock downs, social distancing and other measures designed to tamp down the spread. This is a terrible closing message.

First, Trump himself caught the virus — and ended up in the hospital — while he mocked the idea of wearing a mask. Second, There’s no evidence he’s “immune” to the virus. For instance, a Nevada man has now been infected twice. Third, Fauci remains one of the most popular people in the country, as evidenced by a new Trump campaign ad featuring Facui over the doctor’s objections. Fourth, Americans overwhelmingly supports mask wearing, lock downs and other measures to control the virus. And finally, Covid cases are rising again across the country as we enter the Third Wave.

Wall Street Journal: “Pennsylvania, Kentucky and Virginia have already received more early ballots than they did in the 2016 presidential election. Several other states have topped 2016 numbers for mail ballots returned, even as in-person early voting is opening up in much of the country.”

“So far, 8.2 million people have voted by mail in the general election and 835,000 headed to polling places early to cast ballots, according to figures from 35 states and the District of Columbia compiled by the Associated Press. For comparison, more than 58 million early ballots were cast in 2016.”

New York Times: When will your ballot be counted?

After days of questions from reporters, Joe Biden finally told WKRC that he was “not a fan” of court packing.

David Wasserman: “It is absolutely imperative that every news outlet prepare viewers for the reality that unprecedented partisan polarization of early/Election Day votes makes lopsided batches of results expected, not suspicious, on 11/3.”

Jonathan Bernstein: “I think that’s the best way to put it. Those who have been following this topic know to expect a ‘red mirage’ as last-minute absentee-ballot voters, typically younger and therefore more likely to support Democrats, are the last to have their votes counted, with the process potentially stretching for days or even weeks after Election Day. There’s also some expectation that states where early and absentee votes are the first to be counted will show a big early lead for Joe Biden until in-person Election Day votes start getting tallied. But those are only general patterns, and some states may differ.”

“The safe thing to say is that we may see some wild swings as votes are counted, and that’s just an artifact of the very different voting methods different groups are using.”

“So we are increasing our current projection of the most likely outcome to a Democratic net gain of between two and seven Senate seats. That still leaves pretty much just one scenario — a two-seat net gain — where Republicans would still hold control. Three seats would put the partisan breakdown as a tie, and with a Biden win still more likely than Democrats flipping the Senate, that would probably mean Democratic control too. But some Republicans think a good night might be holding Democrats to simply that 51-49 majority instead of even bigger gains.”

“Of course, there could also be two outstanding races in Georgia headed to a January runoff that could either determine the Senate majority or how large the Democrats’ edge ultimately may be.”

“A voter initiative led by Michelle Obama is partnering with a similar group founded by NBA star LeBron James and other prominent Black athletes and entertainers to sponsor events in major U.S. cities starting next week to generate excitement about voting early for the Nov. 3 election,” Politico reports.

“Grasping for a comeback, President Trump and his Republican allies are intensifying their focus not on Democratic nominee Joe Biden, but on his running mate, Sen. Kamala Harris — arguing without evidence that it’s Harris, the first Black woman on a major party ticket, who would really be in charge if Democrats win the White House,” the AP reports.

“The effort is laced with sexist and racist undertones, and one that is aimed at winning back Republicans and independents who are comfortable with Biden’s more moderate record, but may associate Harris with Democrats’ left flank, despite her own more centrist positions on some major issues.”

Politico: “Here’s how grim things look for House Republicans three weeks out from the election: They’re struggling to win back seats even in conservative bastions like Oklahoma and South Carolina, where Democrats staged shocking upsets in 2018.”

“About a half-dozen seats fall in that category — the lowest of low-hanging fruit for Republicans. But most private and public surveys from both parties show either dead heats or the Democratic incumbent with a modest lead, a startling position for a crop of candidates running in Trump country.”

“President Trump’s campaign is running an online political ad that uses an image of his vice president, his Pentagon chief and his most senior military adviser watching the raid on ISIS leader Abu Bakr al-Baghdadi from the Situation Room on Oct. 29, 2019,” Politico reports.

“‘President Trump wants you to request your ballot,’ said the ad on the website for The Hill newspaper. Clicking on the ad, which includes the tagline ‘Paid for by Donald J. Trump for President, Inc,’ leads to the Trump campaign’s voter sign-up page. There’s only one problem: The photo featuring Joint Chiefs Chairman Gen. Mark Milley was used without the officer’s ‘knowledge or consent.’”

Said Moore: “It was not a great performance by Trump; in fact, I thought it was a pretty crappy performance.”

President Trump denied that his campaign is in financial trouble, despite indications showing otherwise.

Said Trump: “I keep reading Fake News stories that my campaign is running low on money. Not true, & if it were so, I would put up money myself.”

He added: “Much of the money we have spent is on our ground game, said to be the best ever put together. I’ll let you know how good it is on November 3rd. Very expensive to do, but opportunity could be BIG! I will spend additional money if we are not spending enough!”

Alan Abramowitz: “Senate elections have become increasingly tied to presidential voting results. This shows up in this year’s polling, as the margins for states’ presidential and Senate races are closely linked.”

“An analysis of these polling data suggest that Democrats are likely to achieve a net gain of between one and eight seats with the most likely result a net gain of five seats, enough to give them a small Senate majority.”

“More than 85% of elected Republicans who have been in Congress throughout President Trump’s term have largely stood by him through seven crises that would have crushed most politicians,” Axios reports.

“The data shows how Trump’s grip on the Republican Party has tightened — especially in the last two years — as his dissenters have largely piped down, been tossed out, or currently face the threat of losing re-election.”

“Critics and dissenters don’t fare well because that’s not what their Republican constituents want. They want Trump and what he represents — suggesting that his style of politics, and the generation of Republicans he tamed and trained, could outlast his presidency and further transform what once was the party of the sunny Ronald Reagan.”