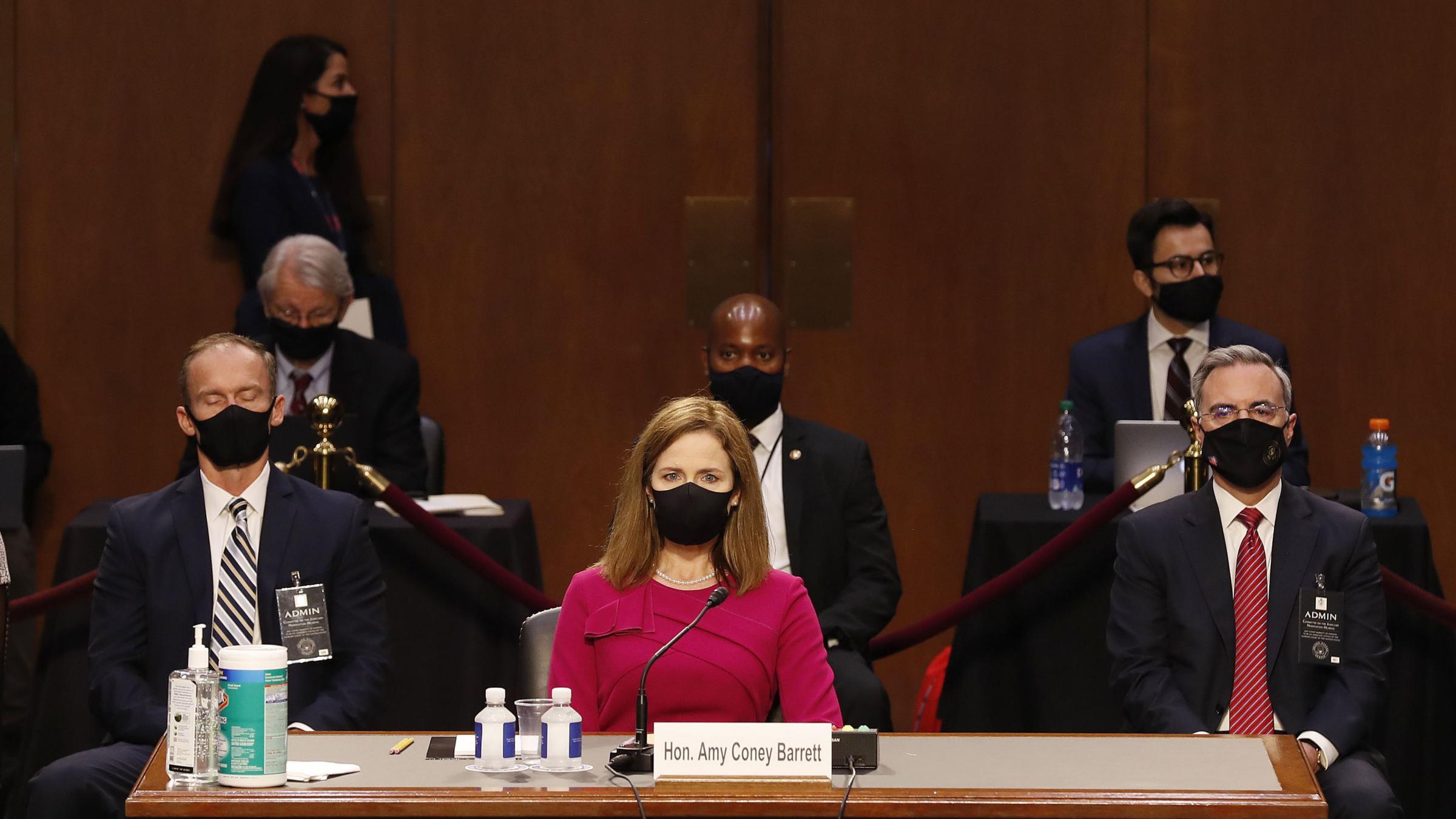 The Senate Judiciary Committee held the first of four days of confirmation hearings for Judge Amy Coney Barrett, Trump’s nominee for the Supreme Court. Senator Lindsey Graham, the committee’s chairman, opened the hearing by saying this is “to confirm Judge Amy Coney Barrett to the Supreme Court,” and “probably not about persuading each other,” because “all the Republicans will vote yes, all the Democrats will vote no.”

After nearly five hours of opening statements by the committee’s members, Barret said judges should not try to legislate from the bench in her opening statement, saying the “courts are not designed to solve every problem or right every wrong in our public life. The policy decisions and value judgments of government must be made by the political branches elected by and accountable to the people.”

Hearings will resume Tuesday for two rounds of questioning. Outside witnesses will testify on Barrett’s nomination on Thursday. The Judiciary Committee plans to reconvene on Oct. 22 to approve Barrett’s nomination. Barrett’s confirmation would cement conservative control of the nation’s highest court, giving them a 6-3 advantage.

Sen. Amy Klobuchar (D-MN) acknowledged on Monday that Democrats do not have “some secret, clever, procedural way to stop” the confirmation of Amy Coney Barrett to the Supreme Court, arguing that the only way for Americans to “change the trajectory of this nomination” is by voting, Axios reports.

She added: “And as good as we are, it’s probably not going to be some brilliant cross-examination that is going to change the trajectory of this nomination, but there is one thing that will. And that is the people of this country, that is them voting, that is them understanding exactly what the Republican Party and this administration are doing right now and how it’s going to affect their lives.”

“Donald Trump and most of my Senate Republican colleagues know the truth: They won’t be able to get away with this after the American people have spoken in this election.” — Sen. Cory Booker (D-NJ), quoted by CBS News, on Senate Republicans pushing ahead to confirm a Supreme Court justice just three weeks before the election.

She added: “This hearing has brought together more than 50 people to sit inside of a closed-door room for hours while our nation is facing a deadly airborne virus.”

Garrett Epps: “Is the implication that Barrett is a “no” vote in the Obamacare case fair? The answer there is a qualified “yes.” Barrett, in her essay “Countering the Majoritarian Difficulty,” was distinctly acerbic in her view of Chief Justice John Roberts’s opinion that saved the Act by construing the “penalty” imposed by the “individual mandate” as a tax. She also raised a professorial eye at his statutory opinion, King v. Burwell, which upheld the Act’s subsidies on federally established health care exchanges against an outlandish conservative reading that would have wrecked them. She did not write “I would have voted the other way,” but it is not only fair to zero in on this issue—it is remarkably close to the kind of thing Senators should do in a confirmation hearing. If she wants to expand on the hints in her article, she can; if she does not wish to, Senators and viewers can draw their own conclusions.”

Dr. Anthony Fauci did not consent to being featured in a new advertisement from the Trump campaign touting President Trump’s handling of the coronavirus pandemic and told CNN his words were taken out of context. Said Fauci: “In my nearly five decades of public service, I have never publicly endorsed any political candidate. The comments attributed to me without my permission in the GOP campaign ad were taken out of context from a broad statement I made months ago about the efforts of federal public health officials.”

Washington Post: Trump campaign twists Fauci comment to suggest praise of the president. Fauci told CNN that “it’s really unfortunate and really disappointing” that the Trump campaign featured him in an ad touting the President’s handling of the Covid-19 pandemic.

Fauci told CNN that the new planned Trump campaign rallies are not a good idea, especially as infection rates are increasing across the country. Said Fauci: “Now is even a worse time to do that.”

The White House refused to allow Anthony Fauci or any of the medical experts on the coronavirus task force to appear on ABC’s This Week, Axios reports.

White House chief of staff Mark Meadows pulled a microphone toward him to speak to reporters on Capitol Hill and then began to remove his mask from his face. When a reporter insisted he keep his mask on, Meadows said he was more than 10 feet away. After the reporter objected, Meadows turned to leave, saying: “I’m not going to talk through a mask.”

REPORTER: Seriously, can you name one of your colleagues that has attacked Judge Barrett’s religion?

KENNEDY: Um, I don’t want to go there.

Twitter disabled some sharing options on a tweet from President Trump on Sunday, and labeled it for violating its rules against spreading coronavirus misinformation, The Verge reports.

Tweeted Trump: “A total and complete sign off from White House Doctors yesterday. That means I can’t get it (immune) and can’t give it. Very nice to know!!”

John Harris and Daniel Lippman: “Nearly everyone remembers the old cliché: If you can’t trust someone to get the little things right, how can you ever count on them to do the big things?”

“As his presidency lurches toward a climactic judgment on Nov. 3, the little things lately have rarely gone more pervasively or embarrassingly wrong — at a time when public confidence in Trump’s handling of the big things is hardly robust.”

“The weather is getting colder and the days are getting shorter — accelerating the economic and psychological damage of the coronavirus pandemic,” Axios reports.

“During the summer, businesses took advantage of outdoor dining, exercise and shopping, and families and friends safely gathered outside and at a distance. As the season changes, much of what made the last several months bearable will vanish.”

“Businesses that have made it this far could start closing in droves.”

Washington Post: “Thirteen states, most of them in the West and Midwest, reported record-setting numbers of coronavirus infections over the past week.”

Sen. Gary Peters (D-MI), who is in a tight re-election race against anti-abortion challenger John James (R), shared a painful story with Elle magazine of his wife having a second-trimester abortion to save her life.

Washington Post: “On trips like these, Secret Service agents were there to protect Trump’s children. But, for the Trump family business, their visits also brought a hidden side benefit. Money.”

“That’s because when Trump’s adult children visited Trump properties, Trump’s company charged the Secret Service for agents to come along. The president’s company billed the U.S. government hundreds, or thousands, of dollars for rooms agents used on each trip, as the agency sometimes booked multiple rooms or a multiroom rental cottage on the property.”

New York Times: “President Trump’s long rants and seemingly erratic behavior last week — which some doctors believe might have been fueled by his use of dexamethasone, a steroid, to treat Covid-19 — renewed a long-simmering debate among national security experts about whether it is time to retire one of the early inventions of the Cold War: the unchecked authority of the president to launch nuclear weapons.”

“Microsoft has taken legal steps to dismantle one of the world’s largest botnets, an effort it says is aimed at thwarting criminal hackers who might seek to snarl up state and local computer systems used to maintain voter rolls or report on election results,” the Washington Post reports.

Facebook will ban posts that deny the Holocaust in a reversal of a long-held and controversial policy, Bloomberg reports.

Said CEO Mark Zuckerberg in a post: “I’ve struggled with the tension between standing for free expression and the harm caused by minimizing or denying the horror of the Holocaust. My own thinking has evolved as I’ve seen data showing an increase in anti-Semitic violence.”

New York Times: “Federal payments to farmers are projected to hit a record $46 billion this year as the White House funnels money to Mr. Trump’s rural base in the South and Midwest ahead of Election Day.”

“The gush of funds has accelerated in recent weeks as the president looks to help his core supporters who have been hit hard by the double whammy of his combative trade practices and the coronavirus pandemic.”

Democrats are so convinced that New York Gov. Andrew Cuomo could be considered for Joe Biden’s attorney general that aides at the National Governors Association, which Cuomo chairs, are looking into contingencies for replacing him, Axios reports.