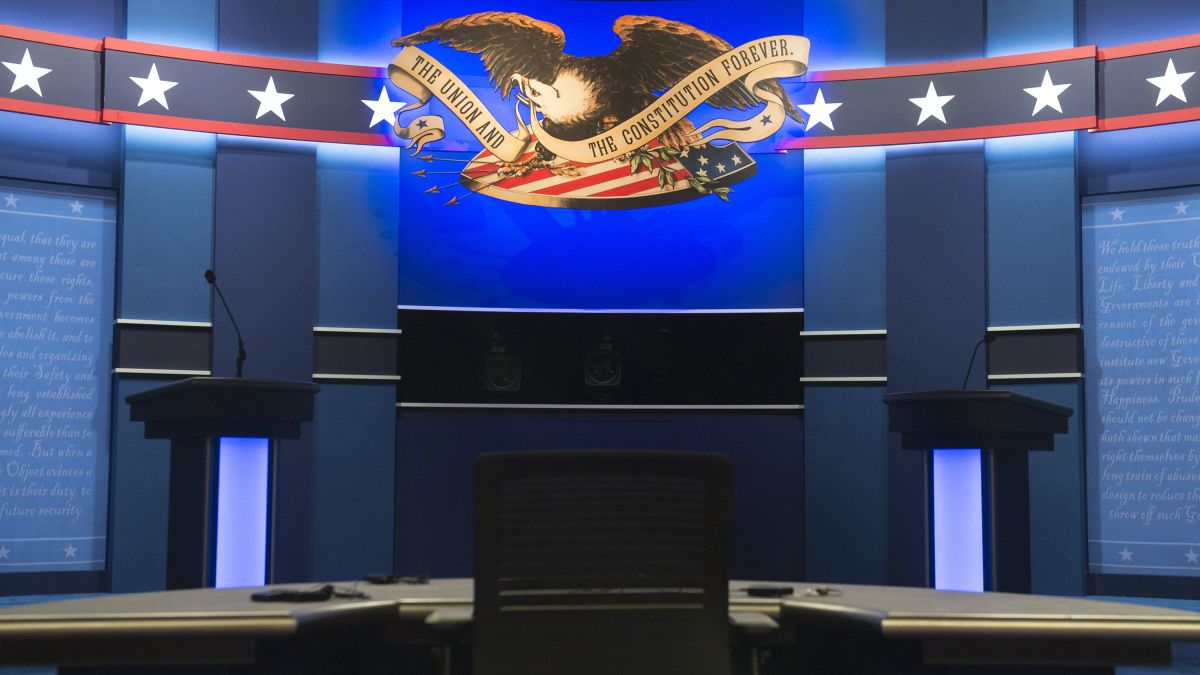 “The second presidential debate was formally canceled late Friday after President Trump refused to participate in a virtual event, the latest sign of the upheaval that the coronavirus has wrought on the 2020 campaign,” the New York Times reports.

“Once Mr. Trump pulled out of the debate, his Democratic challenger, Joseph R. Biden Jr., scheduled his own town-hall-style event that night on ABC, leaving the commission little choice but to abandon its plans. Mr. Trump’s campaign was in talks on Friday with NBC to hold a counter-event for the president, most likely on the same night.”

Fox News anchor Chris Wallace put in as stark as terms possible that, in his esteem, President Trump made a “big mistake” in bowing out of the virtual second debate, Mediaite reports.

Said Wallace: “Where I think the president made a mistake is maybe a virtual debate isn’t an in-person debate, but it’s better than no debate. That’s what the president will get now.”

He added: “He is behind in the polls. He has two opportunities; it seems to me two big opportunities to flip the script, which were the two debates, and he gave one of them away.”

“As President Trump skids deeper into political peril, anxious Republicans have started to try to distance themselves from his fate, appealing to voters to elect them as a check on a Joe Biden administration,” the Los Angeles Times reports.

Said “I think Trump might cause us a tidal wave. He is ankle weights in a pool on Senate candidates.”

“For Republicans, fearful of a possible electoral disaster just weeks away, it has become safe at last to dis Donald Trump — or at least to distance themselves from him in unmistakably purposeful ways,” Politico reports.

“A barrage of barbed comments in recent days shows how markedly the calculus of fear has shifted in the GOP. For much of the past four years, Republican politicians were scared above all about incurring the wrath of the president and his supporters with any stray gesture or remark that he might regard as not sufficiently deferential. Now, several of them are evidently more scared of not being viewed by voters as sufficiently independent.”

“This is far from an insurrection. Republicans in the main aren’t outright repudiating Trump. But they are effectively rolling their eyes in exasperation with him, and especially his handling of the coronavirus pandemic.”

President Trump addressed supporters from the White House, his first public appearance since returning from a three-day hospitalization due to coronavirus, Politico reports.

The crowd of 500, despite wearing masks, was “packed together below the Truman Balcony where he spoke. According to a person familiar with the event, more than 2,000 guests had been invited.”

“Trump kept his comments to the cheering crowd shorter than usual, speaking for less than 17 minutes.”

Sen. Lindsey Graham, who chairs the Senate Judiciary Committee set to consider President Trump’s Supreme Court nominee next week, refused on Friday to be tested for the coronavirus, AFP reports.

“Graham’s move prompted the debate with Jaime Harrison to be scrapped, with separate interviews of the candidates conducted instead.”

Nate Silver: “The reason Lindsey Graham won’t get tested despite having been exposed to many COVID+ people is because if he reveals a positive test and has to quarantine the Amy Coney Barrett nomination could get scuttled. There is no other logical reason.”

“Donald Trump was on the phone, and he was talking about dying. It was Saturday, October 3, and while his doctor had told the outside world that the president’s symptoms were nothing to worry about, Trump, cocooned in his suite at Walter Reed National Military Medical Center in Bethesda, Maryland, was telling those close to him something very different.”

“The person on the other end of the line couldn’t forget that unusual word the president used: dier. A seldom-said dictionary standard, it was a classic Trumpism, at once sinister and childlike. If being a loser was bad, being a dier was a lot worse. Losers can become winners again. Diers are losers forever. But aren’t we all diers in the end? Donald Trump, the least self-reflective man in America, was contemplating his own mortality.”

“North Korea unveiled what analysts believe to be one of the world’s largest ballistic missiles at a military parade celebrating the 75th anniversary of the Workers’ Party broadcast on state-run television on Saturday,” CNN reports.

New York Times: “As president-elect, he had pledged to step back from the Trump Organization and recuse himself from his private company’s operation. As president, he built a system of direct presidential influence-peddling unrivaled in modern American politics.”

“Federal tax-return data for Mr. Trump and his business empire, which was disclosed by The New York Times last month, showed that even as he leveraged his image as a successful businessman to win the presidency, large swaths of his real estate holdings were under financial stress, racking up losses over the preceding decades.”

“But once Mr. Trump was in the White House, his family business discovered a lucrative new revenue stream: people who wanted something from the president. An investigation by The Times found over 200 companies, special-interest groups and foreign governments that patronized Mr. Trump’s properties while reaping benefits from him and his administration. Nearly a quarter of those patrons have not been previously reported.”

New York Times: “Of all the mini-battlegrounds within Wisconsin — perhaps the most pivotal state in November for both President Trump and Joseph R. Biden Jr. — the mother lode of absentee ballots is coming in Dane County, a Democratic stronghold that includes Madison. As of Friday, the number of submitted ballots there amounted to more than 36 percent of the county’s total 2016 election vote, a sign of significant enthusiasm; that figure is 10 percentage points higher than in any other county in the state…”

“The yawning disparities in voting across Wisconsin and several other key battlegrounds so far are among the clearest signs yet this fall that the Democratic embrace of absentee voting is resulting in head starts for the party ahead of Election Day. For Republicans, the voting patterns underscore the huge bet they are placing on high turnout on Nov. 3, even as states like Wisconsin face safety concerns at polling sites given the spikes in coronavirus cases.