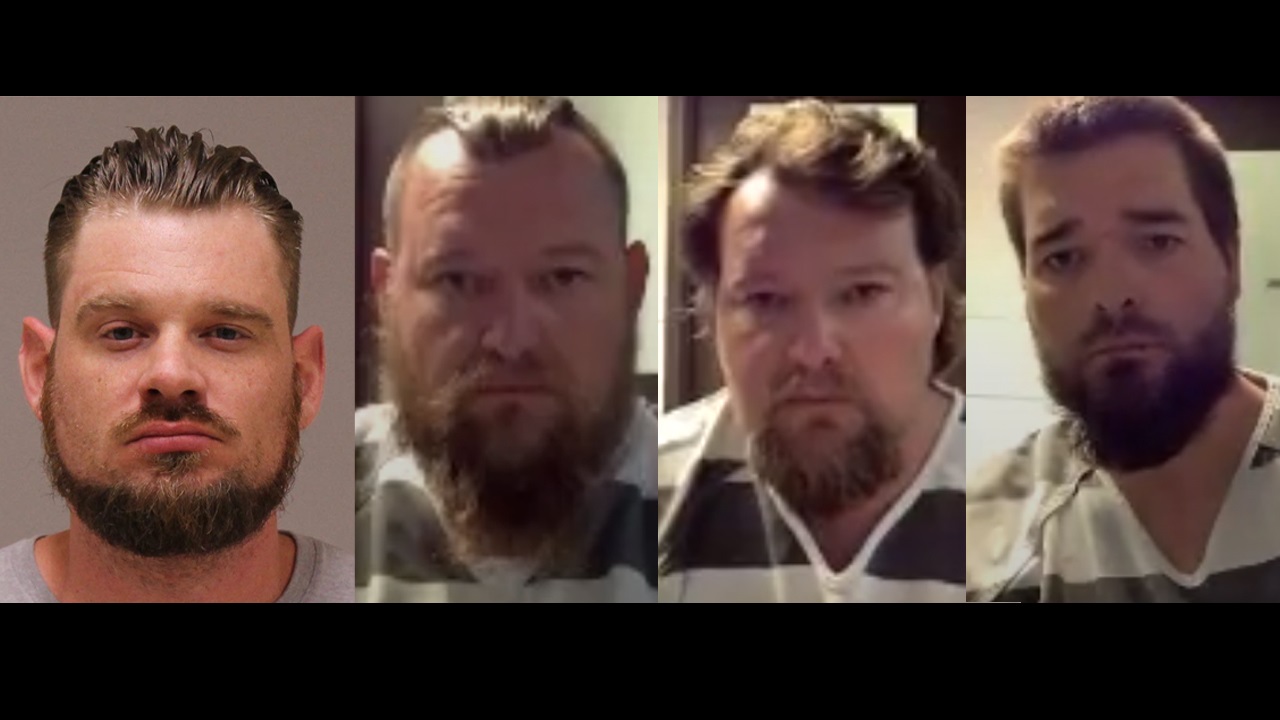 Six men were arrested and accused of plotting with a militia group to kidnap Michgian Gov. Gretchen Whitmer (D), the New York Timesreports.

“The men, some of whom the FBI said had discussed overthrowing the government, had been discussing taking Ms. Whitmer hostage since at least the summer… Several of the men had talked about creating a society in which they could be ‘self-sufficient; and one said he wanted 200 men to storm the Statehouse in Lansing, Mich.”

“The men gathered over the summer for firearms training, combat drills and tried to make explosives.”

Shortly after Gov. Gretchen Whitmer (D) addressed the public regarding an elaborate kidnapping plot thwarted by FBI, the White House released a statement on behalf of President Trump, who was directly mentioned in Whitmer’s press conference, WXYZ reports.

Said the statement: “Governor Whitmer is sowing division by making these outlandish allegations. America stands united against hate and in support of our federal law enforcement who stopped this plot.”

“The Department of Homeland Security warned on Tuesday that violent white supremacy was the ‘most persistent and lethal threat in the homeland’ in an annual assessment that a former intelligence chief had accused the agency of withholding in deference to President Trump,” the New York Times reports.

“The threat assessment highlighted white supremacists as the most deadly among domestic terrorists in recent years and Russia as the primary threat to spreading disinformation.”

President Trump called FBI director Christopher Wray “disappointing,” criticizing him for not doing more to investigate voter fraud, after Wray said there is no evidence of any coordinated fraud ahead of the election. CBS News reports.  Said Trump: “He’s been disappointing. He doesn’t see the voting ballots as a problem.”

Trump also expressed frustration with Attorney General William Barr, arguing that he had not done enough to prosecute the president’s political enemies.

“Democracy isn’t the objective; liberty, peace, and prosperity are. We want the human condition to flourish. Rank democracy can thwart that.”  — Sen. Mike Lee (R-UT), on Twitter.

President Trump asserts in a new video that its a “blessing from God” that he caught COVID-19 because he now sees the benefit of therapeutic medicines and claims he will provide them “free” and says he considers them a “cure” — a statement which is not scientifically supported.

“President Trump extolled the cutting-edge coronavirus treatments he received as ‘miracles coming down from God.’ If that’s true, then God employs cell lines derived from human fetal tissue,” according to MIT Technology Review.

“The emergency antibody that Trump received last week was developed with the use of a cell line originally derived from abortion tissue, according to Regeneron Pharmaceuticals, the company that developed the experimental drug.”

“A top White House security official, Crede Bailey, is gravely ill with Covid-19 and has been hospitalized since September,” Bloomberg reports.

“The White House has not publicly disclosed Bailey’s illness. He became sick before the Sept. 26 Rose Garden event President Trump held to announce his Supreme Court nominee Amy Coney Barrett that has been connected to more than a dozen cases of the disease.”

The coronavirus outbreak has infected “34 White House staffers and other contacts” in recent days, according to an internal memo obtained by ABC News, an indication that the disease has spread among more people than previous known in the seat of American government.

Vice President Mike Pence, currently in Arizona, has cancelled campaign events in Indiana tomorrow and will be returning to Washington, D.C. instead, the AP reports.  His spokesman tells CBS News that “nobody’s sick” and “there’s no positive tests.”

“During a surprise trip to Walter Reed on Nov. 16, 2019, Trump mandated signed NDAs from both physicians and nonmedical staff, most of whom are active-duty military service members, these people said. At least two doctors at Walter Reed who refused to sign NDAs were subsequently not permitted to have any involvement in the president’s care.”

“The reason for his trip last year remains shrouded in mystery.”

Within a day of tweeting that he was calling off bipartisan talks for a coronavirus stimulus deal, President Trump phoned House Minority Leader Kevin McCarthy and indicated he was worried by the stock market reaction and wanted a “big deal” with Speaker Nancy Pelosi, Axios reports.

CNN reports “it’s unclear what, exactly, Trump’s vision of a comprehensive deal would entail and there remains significant hurdles — and skepticism — when it comes to reaching an agreement through talks that have been largely stuck in the same place for several months.”

Politico reports “Several frustrated GOP lawmakers — who are facing major political headwinds as they fight to hang on to their Senate majority — are urging Trump to come back to the negotiating table, as millions of Americans are out of work, airlines are on the verge of massive layoffs and the Federal Reserve chairman recently warned of dire economic consequences if Congress doesn’t act.”

“Some Republicans even fear that Trump’s Tuesday order to halt the talks will not only mean months of delay for suffering families and businesses, but it will also ensure that the GOP takes the political hit for it — even though a deal was unlikely to come together before the election, and despite their belief that Speaker Nancy Pelosi is to blame.”

Speaker Nancy Pelosi said she would not agree to stand-alone aid package for airlines unless the Trump administration committed to a broader pandemic relief plan to help struggling Americans, declaring that “there is no stand-alone bill without a bigger bill,” the New York Times reports.  “Her comments cast doubt on the prospects for a compromise just hours after President Trump had given an upbeat assessment, saying in an interview that he had reconsidered his decision to pull the plug on bipartisan negotiations on a stimulus plan until after the election.”

Speaker Nancy Pelosi said that Democrats will hold an event on Friday to discuss the 25th Amendment amid concerns over President Trump’s coronavirus diagnosis, The Hill reports.  Said Pelosi: “Tomorrow, by the way, tomorrow, come here tomorrow. We’re going to be talking about the 25th Amendment. But not to take attention away from the subject we have now.”

“Caught by surprise by President Trump’s promise to deliver drug-discount cards to seniors, health officials are scrambling to get the nearly $8 billion plan done by Election Day,” Politico reports.

“The taxpayer-funded plan, which was only announced two weeks ago and is being justified inside the White House and the health department as a test of the Medicare program, is being driven by Centers for Medicare and Medicaid Services Administrator Seema Verma and White House chief of staff Mark Meadows.”

Elliott Broidy, a fundraiser for President Trump and the Republican Party, has been charged in an illicit lobbying campaign aimed at getting the Trump administration to drop an investigation into the multibillion-dollar looting of a Malaysian state investment fund, the AP reports.

Senate Majority Leader Mitch McConnell told reporters that he hasn’t been to the White House since August 6 due to their handling of the coronavirus, The Hill reports.  Said McConnell: “My impression was their approach to how to handle this was different from mine and what I insisted we do in the Senate, which was to wear a mask and practice social distancing.”  He added: “Now, you’ve heard of other places that have had a different view, and they are, you know, paying the price for it.”

White House communications director Alyssa Farah declined to tell reporters when President Trump last tested negative for COVID-19, saying that “the doctors would like to keep it private,” Axios reports.  It marks at least the eighth time since Trump tested positive for the virus one week ago that White House officials have refused to disclose the information.

“The White House has repeatedly refused to disclose when President Trump last tested negative for COVID-19 before he announced his infection — information that could help determine who he exposed to the virus and the severity of his illness,” ABC News reports.

“The White House has also declined to confirm when and how Trump was tested before last Tuesday’s presidential debate with Joe Biden.”

“White House chief of staff Mark Meadows hosted a lavish wedding for his daughter in Atlanta this May, despite a statewide order and city of Atlanta guidelines that banned gatherings of more than 10 people to prevent the spread of the deadly coronavirus,” the Atlanta Journal Constitution reports.