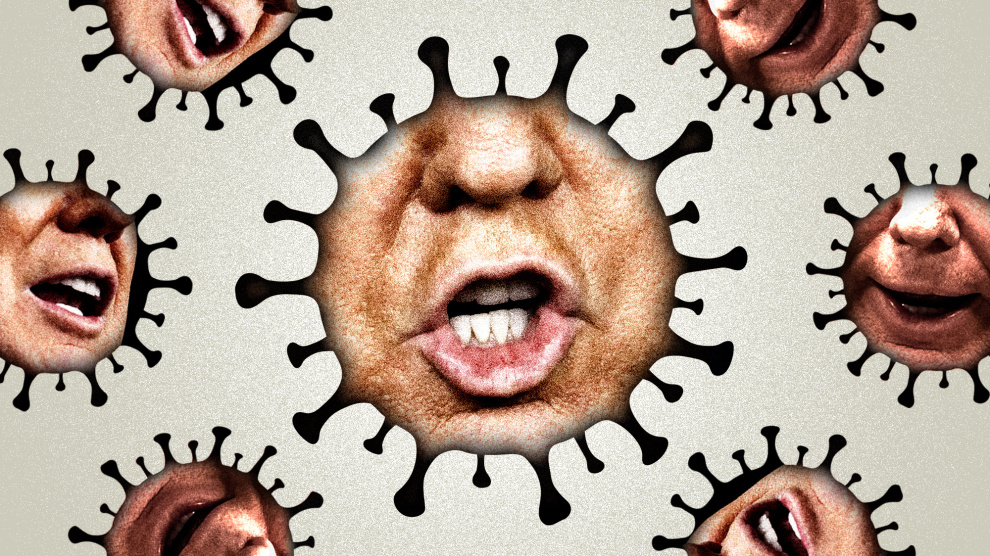 “The White House […] was in full-blown chaos, even by the standards of the havoc of the Trump era,” the New York Times reports. “Aides said the president’s voice was stronger after his return from the hospital Monday night, but at times he still sounded as if he was trying to catch air. The West Wing was mostly empty, cleared of advisers who were out sick with the coronavirus themselves or told to work from home rather than in the capital’s most famous virus hot spot. Staff members in the White House residence were in full personal protective equipment, including yellow gowns, surgical masks and disposable protective eye covers.”

But they will not say when Trump last tested negative, raising questions as to whether he was tested at all between infection and the first presidential debate on Tuesday, September 29. White House spokesman Brian Morgenstern also refused to say: “I don’t know when he last tested negative… We’re not asking to go back through a bunch of records and look backwards.”

The answer could be located within minutes if Trump was tested every day. But it seems the White House doesn’t want the public to know the true timeline. Probably because it is now revealed that Trump has not been tested daily, or even regularly.

It is also highly likely that Trump knew he was infected during the debate. Why? He showed up to the Cleveland Clinic facility late so as to prevent his being tested prior to the debate. And when the debate ended, Biden walked to the front of the stage to greet his friends and family. Trump did not. He walked off the stage without greeting anyone. That’s the behavior of someone who knew he was contagious. And if Trump was already being treated with steroids at the debate, well that explains his behavior.

“The five U.S. attorneys along the border with Mexico, including three appointed by President Trump, recoiled in May 2018 against an order to prosecute all illegal immigrants even if it meant separating children from their parents. They told top Justice Department officials they were ‘deeply concerned’ about the children’s welfare,” the New York Times reports.

“But the attorney general at the time, Jeff Sessions, made it clear what Mr. Trump wanted on a conference call later that afternoon.”

Said Sessions: “We need to take away children.”

“Rod Rosenstein, then the deputy attorney general, went even further in a second call about a week later, telling the five prosecutors that it did not matter how young the children were.”

Rudy Giuliani told Bloomberg that he is currently taking hydroxychloroquine in an effort to fend off a possible COVID-19 infection after a slew of Trumpworld figures Giuliani had contact with have fallen ill.

White House physician Dr. Sean Conley reports President Trump has been “symptom-free” from the coronavirus for over 24 hours, Axios reports.

“President Trump, quarantined with COVID-19 in the White House residence and reportedly badgering staff to let him return to the Oval Office, was unusually active on Twitter late into Tuesday night, tweeting and retweeting dozens of times about Hillary Clinton and Russia, even moving markets by ending coronavirus stimulus negotiations — before apparently reversing himself hours later,” The Week reports.

Michelle Goldberg: “The president’s Twitter feed is always nuts but right now it really seems like he’s suffering some sort of psychological implosion.”

Trump’s deranged tweeting continued into the day Wednesday, as he demanded the jailing of his political enemies, Politico reports. “Trump twice amplified supporters’ criticisms of Attorney General William Barr, including one featuring a meme calling on him to ‘arrest somebody!’ He wondered aloud why his rivals, like President Barack Obama, Democratic nominee Joe Biden and former Democratic nominee Hillary Clinton hadn’t been imprisoned for launching a ‘coup’ against his administration.”

Said Trump: “Where are all of the arrests? Can you imagine if the roles were reversed? Long term sentences would have started two years ago. Shameful!”

Director of National Intelligence John Ratcliffe has approved the release to the Department of Justice of a large binder full of documents to assist a review of the Obama administration’s handling of the Trump-Russia investigation,” Axios reports.

“It follows a flurry of tweets by the president accusing the Obama administration of orchestrating a ‘treasonous plot’ against him by investigating his campaign’s ties to Russia.”

Greg Sargent: “When you step back and survey the last two years of U.S. politics, one of the biggest story lines that comes into view is this: One after another, a whole string of deeply corrupt schemes that President Trump has hatched to smooth his reelection hopes have crashed and burned.”

“In all these cases, Trump has either blown up the schemes himself or compounded the damage they did to him when they self-destructed. In some cases he did both.”

“Meanwhile, Trump has also managed to wreck numerous opportunities that he could have easily turned to his political advantage if he had reacted to them in a non-depraved manner. Instead, he sought to pervert or corrupt them in ways that ended up backfiring.”

New York Times: “BuzzFeed News has pulled a political correspondent from the White House press pool, citing concerns that the area has become a coronavirus hot zone after President Trump, many of his top aides — including the press secretary Kayleigh McEnany — and several journalists have tested positive for the virus.”

“The Department of Justice has weakened its long-standing prohibition against interfering in elections,” ProPublica reports.

“Avoiding election interference is the overarching principle of DOJ policy on voting-related crimes. In place since at least 1980, the policy generally bars prosecutors not only from making any announcement about ongoing investigations close to an election but also from taking public steps — such as an arrest or a raid — before a vote is finalized because the publicity could tip the balance of a race.”

“But according to an email sent Friday by an official in the Public Integrity Section in Washington, now if a U.S. attorney’s office suspects election fraud that involves postal workers or military employees, federal investigators will be allowed to take public investigative steps before the polls close, even if those actions risk affecting the outcome of the election.”

New York Times: “An event on Sept. 26 in the Rose Garden, after which a number of officials including President Trump tested positive for the virus, violated the city’s mandates limiting the size of gatherings and requiring masks. Because the White House is on federal property, however, it is exempt from such rules. Guests at the event may well have ventured into the city, but the White House has refused to comply with a municipal request for help with contact tracing. The city had its highest number of positive cases on Monday — 105 — since June, though city officials say it would take several days to determine any trend.”

“At least one testing site in Washington reported that those seeking a test doubled to 600 on Monday as residents responded with concern to the cases stemming from the White House and Capitol Hill.”

“A federal appeals court ruled Wednesday that Manhattan’s district attorney can enforce his subpoena for President Trump’s tax returns, rejecting a bid by Trump’s lawyers to kill the request and potentially setting up another showdown at the Supreme Court,” the Washington Post reports.

“Though the district attorney has agreed not to enforce his subpoena immediately while Trump asks the high court to hear his case again, the ruling marks another blow for the president, who has fought for more than a year to shield his financial records from investigators, and follows separate, jarring revelations about the enormity of his debt.”

Bloomberg: “The medical staff has traced the White House cases to the Sept. 26 Rose Garden ceremony for Trump to announce Amy Coney Barrett as his pick to fill a Supreme Court vacancy.”

“President Trump pulled the plug on ongoing bipartisan coronavirus relief talks in an abrupt move that jolted Wall Street and surprised lawmakers of both parties, but hours later called on Congress to approve a bill providing another direct check to many Americans,” the Wall Street Journal reports.

Late last night, Trump urged both houses of Congress to “IMMEDIATELY” revive a lapsed loan program for small businesses and to approve funds for airlines and another round of stimulus checks.

New York Times: “It remained unclear if his tweets reflected a willingness to restart negotiations.”

Washington Post: “First, he says he won’t pursue a package until after election. Then he demands Congress immediately pass bills.”

“While Supreme Court nominee Amy Coney Barrett has faced questions about how her Catholic faith might influence her jurisprudence, she has not spoken publicly about her involvement in People of Praise, a small Christian group founded in the 1970s and based in South Bend, Ind,” the Washington Post reports.

“Barrett, a federal appellate judge, has disclosed serving on the board of a network of private Christian schools affiliated with the group. The organization, however, has declined to confirm that she is a member. In recent years, it removed from its website editions of a People of Praise magazine — first those that included her name and photograph and then all archives of the magazine itself.”

“A 2010 People of Praise directory states that she held the title of ‘handmaid,’ a leadership position for women in the community.”

Joe Biden said Tuesday that the second presidential debate should not be held if President Trump is still infected with coronavirus, but that he would base his participation in the debate upon recommendations from medical experts, CNN reports.

Said Biden: “Well, I think if he still has Covid, we shouldn’t have a debate. I think we’re gonna have to follow very strict guidelines. Too many people have been infected and it’s a very serious problem.”

He continued: “And so I’ll be guided by the guidelines of the Cleveland Clinic, and what the docs say is the right thing to do — if and when he shows up for debate.”

Dr. Anthony Fauci “offered a grim image of the coronavirus pandemic, telling students Tuesday that between 300,000 and 400,000 people could die from the disease in the United States,” Politico reports.