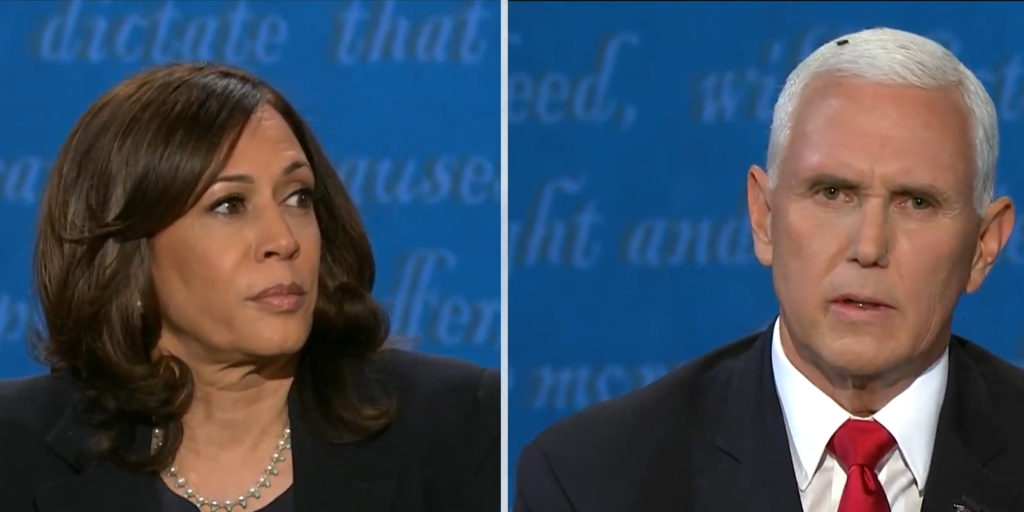 Vice President Mike Pence was better than Trump was last week, but he still was an obnoxious interrupter and over talker who dodged the question and lied repeatedly. In other words, Pence was a typical Republican.

Pence spent his time stalling with platitudes and hoping the audience might forget the question that was asked. His strategy was to gaslight people with his calm demeanor and try to project some sense of normalcy in the country. That strategy might have a chance of working during normal times, but it completely unraveled when Kamala Harris repeatedly reminded Americans of what’s happened over the last four years.

Harris was more animated than Pence and she was definitely more aggressive. But she was also warmer and, as Claire McCaskill said on MSNBC, she had a touch of joy in answering questions and talking directly to the voter through the screen that really connects and disarms.

Susan Page had good questions but she was a horrible moderator, refusing or incapable to stop Pence from stealing time and interrupting constantly.

And then there was the fly. I don’t understand, did Pence not feel it? It was there for over three minutes. He could have swatted it away. But, the whole situation proves that flies are attracted to shit.

Josh Marshall: “[Harris] hit every last point the campaign could have asked for. Just methodically. Killing the ACA, Charlottesville, the horrific failure of the COVID response. She didn’t really care about Mike Pence. She was there to make a case against Donald Trump. And she did.

Would it shift the direction of the campaign? No. If Biden and Harris were behind it would be nice to see but it’s not a game changer. But they don’t need a game changer. They needed a performance that locked down a lead that is already in place and confirmed the themes they want at the center of the campaign conversation. They got it. She hit the points they wanted and in ways Joe Biden couldn’t.

Mike Pence is a smooth and able politician. But he was mostly going through the motions. He did fine. But Trump’s campaign needed a lot more than fine. The big danger for the Biden campaign was that Pence would open some strong new line of attack against Biden, perhaps doing that by catching Harris out in defending him or failing to do so. Nothing like that happened. When Pence really got traction it was mainly on points that appeal to the Republican base. That’s wasted time.

You can only evaluate debates in their immediate political context. Here the Trump campaign is running out of time to change the trajectory of the election. They needed Pence to at least start doing that tonight. He didn’t. In context, it was almost as bad a result as the first presidential round, even if Pence turned in a serviceable performance, which he did.”

John Harris: “Better pay extra-close attention to Kamala Harris and Mike Pence was the prevailing theme before Wednesday night’s vice presidential debate, because this time it could really matter. The age and possible infirmity of two presidential nominees in their seventies would supposedly infuse this clash of running mates with special gravity.”

“That was a valiant effort at pre-game hype, but it was quickly demolished by the reality of the encounter. Neither Vice President Pence nor Senator Harris could escape the fundamental dynamic of the job they are seeking: The vice presidency is by definition minimizing.”

Ryan Lizza: “Maybe the way to see the Harris-Pence snooze-fest is as a peek into the future of American politics once this Trump-dominated era is over.”

“At the tail end of Wednesday night’s vice-presidential debate—one that was noticeably less fiery and chaotic than last week’s presidential clash—Vice President Mike Pence completely avoided answering what he would do if President Donald Trump refuses to step down if he loses the election,” the Daily Beast reports.

Just minutes after a vice presidential debate in which a fly landed on Vice President Mike Pence’s head, Joe Biden’s campaign is already selling a fly swatter with the imprint: “Truth Over Flies.”

It’s not immediately clear if the campaigns, especially the Trump campaign, will agree to these terms.

“Vulnerable Republicans are beginning to distance themselves from President Trump’s dismissive response to the coronavirus pandemic and his dramatic termination of negotiations with congressional Democrats over federal economic relief, with the latest cracks carrying enormous implications for Trump and the party with just four weeks until Election Day,” the Washington Post reports.

“Facing a political reckoning as Trump’s support plummets and a possible blue tsunami looms, it is now conservatives and Trump allies who are showing flashes of discomfort with the president, straining to stay in the good graces of his core voters without being wholly defined by an erratic incumbent.”

The Trump campaign is exploring having the President hold an event — though not a rally — in Pittsburgh on Monday, the New York Timesreports.

They’re setting up possible travel plans for him all week, with later in the week seeming more solid.

“In the third fundraising quarter of 2020, spanning July through September, Greenfield’s campaign says it raised $28.7 million, a ‘record-shattering’ figure never before reported by a U.S. Senate candidate in Iowa.”

“The president’s hours-long Twitter screed this week about the Russia probe and his allies’ recent declassification blitzes don’t appear to be coincidences,” Politico reports.

“U.S. Attorney John Durham — tasked by Attorney General William Barr to review the 2016-era Russia investigation — is not expected to release information related to the probe before Election Day… Senate Republicans running similar investigations were told of the intention within the last week — and it’s why they’ve been stepping up their releases of declassified documents.