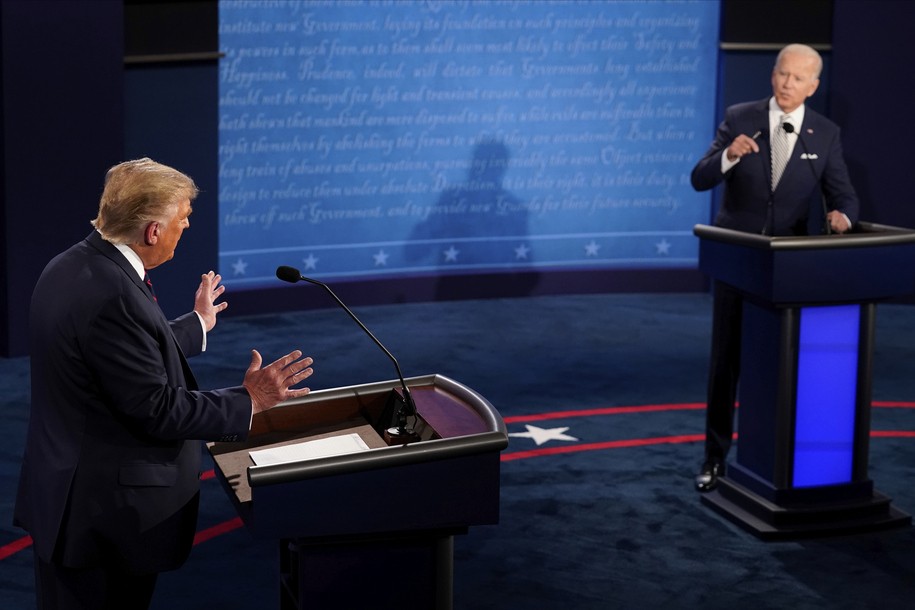 Republican strategists tell National Journal that their private polls are even worse for President Trump and Republican candidates after the first presidential debate than what’s available publicly.

Meanwhile, a new FiveThirtyEight/Ipsos poll finds vice presidential debate watchers were more impressed with Kamala Harris’s performance than Mike Pence’s, with 69% saying her performance was “very good” or “somewhat good,” compared to 60% who said the same for him.

President Trump told Fox Business that he would not take part in the next presidential debate if it’s done remotely as the debate commission indicated.

Said Trump: “I’m not going to waste my time on a virtual debate, that’s not what debating is all about. You sit behind a computer and do a debate — it’s ridiculous, and then they cut you off whenever they want.”

He added: “That’s not acceptable to us. I’m not going to do a virtual debate.”

Joe Biden’s campaign said he would participate in a virtual debate.

Here’s the Trump campaign’s statement about not participating in the next debate:

President Trump won the first debate despite a terrible and biased moderator in Chris Wallace, and everybody knows it. For the swamp creatures at the Presidential Debate Commission to now rush to Joe Biden’s defense by unilaterally canceling an in-person debate is pathetic. That’s not what debates are about or how they’re done.

Here are the facts: President Trump will have posted multiple negative tests prior to the debate, so there is no need for this unilateral declaration. The safety of all involved can easily be achieved without canceling a chance for voters to see both candidates go head to head. We’ll pass on this sad excuse to bail out Joe Biden and do a rally instead.

Joe Biden commented to Bloomberg on President Trump’s threat to skip the next presidential debate: “We don’t know what the president’s going to do. He changes his mind every second.” Biden’s campaign then issued a statement saying that, since Trump has pulled out like a coward, that Biden would hold a town hall on October 15, and then called on the Commission for Presidential Debates to change the format of the October 22 debate to a Town Hall so that Trump does not evade accountability.

ABC News will host a town hall with Joe Biden in Philadelphia and moderated by George Stephanopoulos on October 15th, which was to be the night of the second presidential debate.

Stuart Stevens: “About a year ago, I finished a pretty bleak book about the GOP, but it turns out I was too optimistic. Even after the party’s turn away from time-honored Republican principles, I couldn’t have imagined a party that would abandon any pretense of standing for conservative values, decency or common sense. Having spent four years defending their guy at every turn, they’re stuck. In for a penny, in for a pound: Republicans can’t tell the truth about Trump anymore. Even if they wanted to.”

“Many GOP candidates know they face near-impossible odds this year. Across the nation, every morning there are campaign team calls on which political professionals try to think of ways their bosses might escape impending electoral doom. I’ve been on calls like this more times than I’d care to remember, and I know they will take on an increasingly desperate tone as reality sinks in. In a week or two, it’ll be all gallows humor from here on out as they mask the pain.”

David Frum: “We saw a weird moment when a fly landed on Pence’s snow-white hair—and the vice president did not react at all. No doubt, it’s a conundrum, what to do in such a situation. If Pence had shooed the fly and the fly had refused to shoo, that would have been bad. So he did nothing. And that doing nothing somehow in one powerful visual moment concentrated everything.”

“It symbolized the whole Pence vice presidency, the determined, willful refusal to acknowledge the most blaring and glaring negative realities. Through all of the scandals and the crimes and the disasters of the past four years, Mike Pence was the man who pretended not to notice. And now there was a fly on his head, and he pretended not to notice that too.”

“Vice President Mike Pence ignited speculation about his health when he arrived at the only vice presidential debate Wednesday night with a bloody left eye, but a senior administration official on Thursday said there’s no reason to be concerned,” Politico reports.

“White House doctors have cleared the vice president of a conjunctivitis infection, commonly known as pink eye, and believe Pence suffered from a broken blood vessel instead.”

President Trump referred to Sen. Kamala Harris in a Fox Business interview as, “This monster who was on stage with Mike Pence last night.”

Cook Political Report: “Republicans no longer have a realistic path to picking up the 17 seats they need for a majority. In fact, if the 25 races in our Toss Up column were to break evenly, Democrats would pick up five to six seats. Right now, the most likely outcome is a Democratic net gain of between five and ten seats, with anything from no net change to a Democratic gain of 15 seats possible.”

Larry Sabato’s Crystal Ball moves Arizona to Leans Democratic and Georgia to Toss Up. The forecast now has Joe Biden at 290 electoral votes with another 85 as Toss Ups.

President Trump posted a new video from the White House, which begins with him addressing seniors and explaining that he is a senior.  Said Trump: “I know you don’t know that, nobody knows that.”   He added: “You’re not vulnerable, but they like to say the vulnerable, but you’re the least vulnerable, but for this one thing you are vulnerable and so am I.”

The Biden campaign is resuming negative advertising now that President Trump is out of the hospital and regularly attacking Democrats on Twitter, Bloomberg reports.

Joe Biden’s campaign announced that he once again tested negative for the novel coronavirus.

Tim Alberta: “Last week, I heard from one of the smartest Republicans alive, a longtime party operator who lives in a state Trump carried by double digits. He told me the polling he was seeing there was something out of a nightmare; these were numbers he never expected to see in his lifetime. The only thing more dizzying than that? I had another conversation, with another dependable red-state Republican, the very next day, and heard the very same thing.”

“Both of these men were sounding the alarm, alerting me that Trump could actually lose their states, and would at the very least drag down a number of down-ballot Republicans, because women have turned on the GOP at a historic clip.”

“Trump lost women by 13 points to Clinton, according to exit polls, and Republicans have long worried that the figure could climb into the high teens. There is now genuine worry that the margin could explode north of 20 points—the biggest gender gap in modern election history.”

“In an unprecedented move, the New England Journal of Medicine on Wednesday published an editorial written by its editors condemning the Trump administration for its response to the Covid-19 pandemic — and calling for the current leadership in the United States to be voted out of office,” CNN reports.