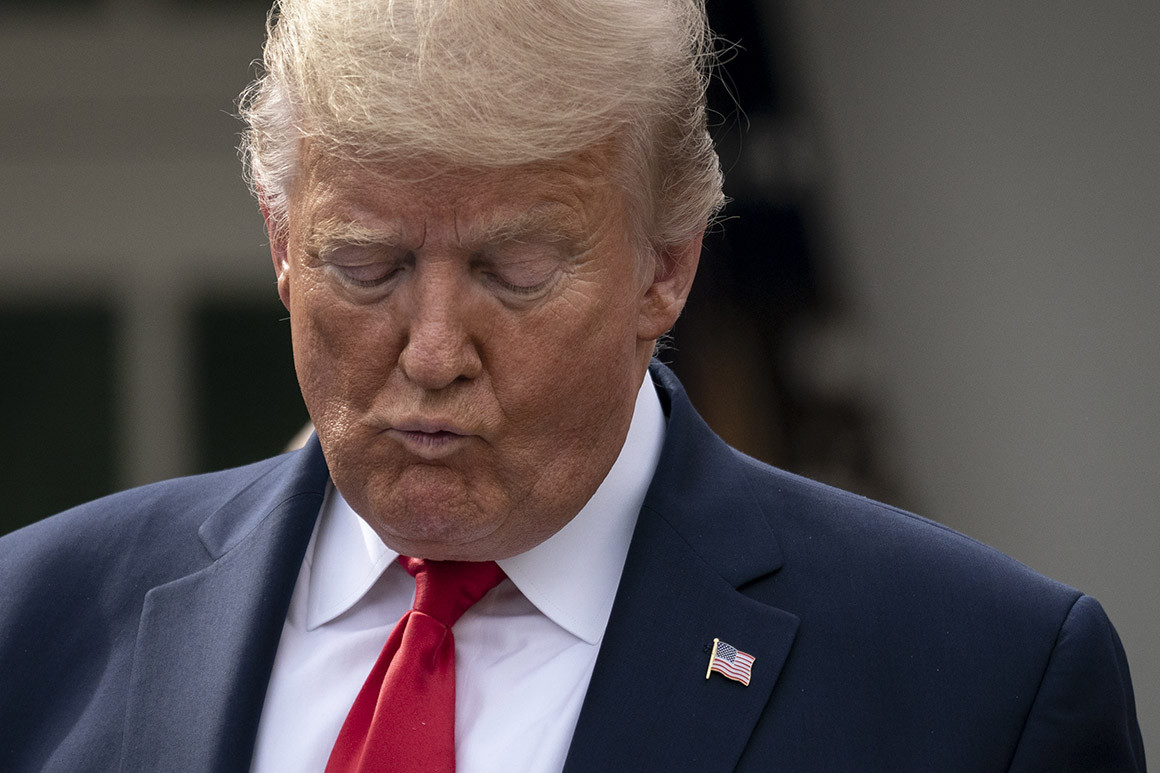 President Trump tweets: “I will be leaving the great Walter Reed Medical Center today at 6:30 P.M. Feeling really good! Don’t be afraid of Covid. Don’t let it dominate your life. We have developed, under the Trump Administration, some really great drugs & knowledge. I feel better than I did 20 years ago!”

A source familiar with President Trump’s phone calls from the hospital today tells CNN that he said “I need to get out of here.” Unnamed sources told CNN that the president is worried that the sight of him being hospitalized “makes him look weak” in front of the nation just weeks out from Election Day. Trump is being warned that if he rushes to leave the hospital and has a setback it would be bad for not just his health, but his re-election campaign. Indeed, Trump should heed the Herman Cain Timeline:

The video above is Trump gasping and wheezing for breath after he returned home to the White House and immediately removed his mask, showing that he has learned nothing. He is a very ill man and if I were a betting man, I would bet he will return to the hospital this week.

Dr. Sean Conley confirmed that President Trump will be leaving Walter Reed Medical Center later today even though “he may not be entirely out of the woods yet.” He added: “If we can get through to Monday…then we will all take that deep sigh of relief.”

New York Times: “Advisers were also troubled by the doctors’ prediction that they might release him on Monday because if they do not, it would signal that the president is not doing as well as indicated. They also worried that a premature return could lead to a second trip to the hospital if his condition worsens.”

Dr. Leana Wen writing in the Washington Post: “If the president was brought into the hospital for closer monitoring, what sense does it make to discharge him just before the time period that’s potentially the most fraught?”

“Despite almost daily disclosures of new coronavirus infections among President Trump’s close associates, the White House is making little effort to investigate the scope and source of its outbreak,” the New York Times reports. “The White House has decided not to trace the contacts of guests and staff members at the Rose Garden celebration 10 days ago for Judge Amy Coney Barrett, where at least eight people, including the president, may have become infected.”

So far, ABC News has confirmed 17 individuals who have been on the White House grounds or in contact with President Trump have tested positive for the coronavirus.

White House press secretary Kayleigh McEnany said in a statement Monday that she has tested positive for the coronavirus. Axios has a Trumpworld coronavirus tracker.

Playbook: “The White House still anticipates more positive tests among the senior staff, which has been deemed essential personnel throughout the pandemic and forced to come into the office. A senior administration official tells us that staffing has been severely curtailed in the White House since this latest outbreak began, and surfaces are being cleaned more frequently.”

President Trump’s former Homeland Security Adviser Thomas Bossert told the Washington Post it “needs to be pointed out” that the president and his top administration officials have been flouting coronavirus guidelines, which apparently led to the outbreak in the White House.

Said Bossert: “At this point, the president and senior people around him have violated all five core principles of the country’s coronavirus strategy. I do not wish to be perceived as criticizing him while he is in this condition, but that needs to be pointed out. I am praying for his full recovery.”

“Nearly a third of hospitalized Covid-19 patients experienced some type of altered mental function — ranging from confusion to delirium to unresponsiveness — in the largest study to date of neurological symptoms among coronavirus patients in an American hospital system,” the New York Times reports.

The CDC finally acknowledged that people “can sometimes be infected with the coronavirus through airborne transmission, especially in enclosed spaces with inadequate ventilation,” the Washington Postreports.

“The long-awaited update to the agency Web page explaining how the virus spreads represents an official acknowledgment of growing evidence that under certain conditions, people farther than six feet apart can become infected by tiny droplets and particles that float in the air for minutes and hours, and that they play a role in the pandemic.”

Sen. Ron Johnson (R-WI) told KHOW that he’ll vote to confirm Supreme Court nominee Amy Coney Barrett even if he’s still testing positive for the coronavirus. Said Johnson: “If we have to go in and vote, I’ve already told leadership I’ll go in a moon suit.”

The Supreme Court on Monday said it will not hear a case from a Kentucky clerk who refused to issue marriage licenses for same-sex couples, but two conservative dissenters in the court’s landmark 2015 decision repeated their criticism of the “ruinous consequences for religious liberty,” the Washington Post reports.

“On Monday a short-handed Supreme Court, still reeling from the death of Justice Ruth Bader Ginsburg, will begin a new term in the shadow of a bitter confirmation fight that is set to take place weeks before the presidential election,” CNN reports. “The justices are still working remotely because of Covid-19 and telephonic arguments will be livestreamed.”

“President Trump has had difficulty articulating a second-term agenda. But there is one thing he’s itching to do if he wins another four years in the White House: ditch his FBI director Christopher Wray, whom he privately trashes as a tool of a supposed deep state,” the Daily Beast reports.

“Over the past three months before testing positive for COVID-19, the president had indicated to several senior officials and close associates that he intends to replace Wray near the start of a second term in office, routinely expressing dissatisfaction with the director’s performance and apparent unwillingness to swiftly root out Trump’s perceived enemies in the bureau… One of these sources said that when the issue of Wray’s alleged subversion came up last month, Trump said that the matter would be resolved ‘next year,’ which this source took to mean after the 2020 election, assuming Trump emerges victorious.”

Rep. Chip Roy (R-TX) put out a statement calling on his former boss Texas Attorney General Ken Paxton (R) to resign immediately after allegations of bribery and abuse of his office.

Gabriel Sherman: “Donald Trump’s erratic and reckless behavior in the last 24 hours has opened a rift in the Trump family over how to rein in the out-of-control president, according to two Republicans briefed on the family conversations. Sources said Donald Trump Jr. is deeply upset by his father’s decision to drive around Walter Reed National Military Medical Center last night with members of the Secret Service while he was infected with COVID-19.”

“Don Jr. has told friends that he tried lobbying Ivanka Trump, Eric Trump, and Jared Kushner to convince the president that he needs to stop acting unstable… Don Jr. is said to be reluctant to confront his father alone.”

Said another source: “Don Jr. has said he wants to stage an intervention, but Jared and Ivanka keep telling Trump how great he’s doing. Don said, ‘I’m not going to be the only one to tell him he’s acting crazy.’”

Derek Thompson: “Starting about 10 years ago, the so-called King of Debt tried something new: spending his own money. He spent up to $400 million buying golf courses, hotels, and wineries. He also took on $400 million in personally guaranteed loans, exposing him to personal bankruptcy in the (very common!) event that he can’t pay back the loans in full.”

“These decisions are unusual for private real-estate companies, which typically take advantage of debt through the tax code and funnel their largest investments through partnerships that protect individual investors from personal bankruptcy. What’s more, it’s not clear how Trump suddenly came up with all of that cash.”

“It gets even weirder. All those golf properties look like horrendous businesses, having declared losses of more than $315 million since 2000, according to Trump’s tax records. In short, Trump is pouring a mysteriously large amount of money into opaque businesses suffering mysteriously high losses.”

CNN: “Afterward, members of the Secret Service voiced escalating concern at what many of the agency’s personnel have determined is total disregard for their well-being amid a deadly and highly contagious pandemic. Agents have tested positive for the virus while traveling for the President’s political rallies, which he insisted on maintaining even against federal health guidelines. As employees self-quarantine or isolate in place, others have been forced to work longer hours to fill the void.”

“It’s a situation that has prompted growing and more vocal concern.”

Said one current Secret Service agent: “That should never have happened… I mean, I wouldn’t want to be around them. The frustration with how we’re treated when it comes to decisions on this illness goes back before this though. We’re not disposable.”

“President Trump’s doctors offered rosy assessments of his condition on Sunday, but the few medical details they disclosed — including his fluctuating oxygen levels and a decision to begin treatment with a steroid drug — suggested to many infectious disease experts that he is suffering a more severe case of Covid-19 than the physicians acknowledged,” the Washington Post reports.

“The assertion by President Trump’s doctors that he could be discharged from the hospital as early as Monday astonished outside infectious-disease experts, who said he remains in a dangerous period of vulnerability when some covid-19 patients decline precipitously and require urgent intervention,” the Washington Post reports.

“Outside doctors said they were mystified by what they said was an inconsistent portrayal of the president’s illness as relatively mild despite the aggressive mix of treatments he is getting.”

Margaret Brennan: “I don’t see why the expectation has now been set for the President to be discharged tomorrow. If he is not discharged, that will now raise further questions. A short term positive headline now becomes a benchmark.”

“But that tightly crafted schedule has now been thrown into uncertainty with the coronavirus diagnoses of at least two Republicans on the Senate Judiciary Committee and the fear that other senators could test positive in the coming days.”

“Sensing an opportunity to delay, Democrats are cranking up their push to postpone the Oct. 12 confirmation hearings, citing the safety of members, aides and Barrett herself — waging a public pressure campaign because they have no powers on their own to stop the proceedings.”

“Joe Biden tested negative for the novel coronavirus on Sunday, his third negative test since he shared a debate stage for more than 90 minutes with President Trump, who has been hospitalized with the infection,” the Washington Post reports.