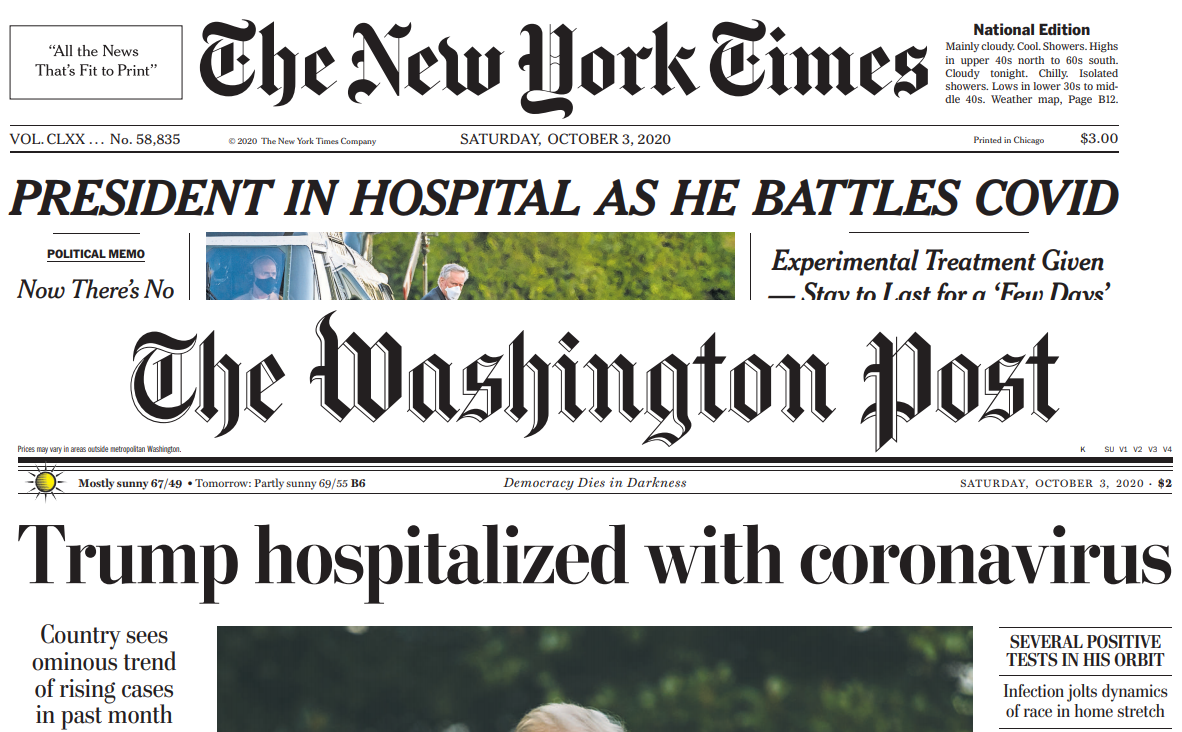 Gabriel Sherman reports that conversations with Republicans close to White House over the last 12 hours indicate President Trump’s medical condition has been been far more dire than White House and doctors have said. Before being taken to Walter Reed Medical Center, Trump kept asking aides: “Am I going out like Stan Chera? Am I?” Chera was Trump’s New York City friend who died of Covid in April.

Daily Beast: Trump doctor’s briefing turns into code-red debacle. President Trump “was administered oxygen at the White House on Friday before he was transported to the military hospital,” the AP reports. His doctor refused to answer questions on the topic from reporters earlier.

Two people close to the White House told the New York Times “that the president had trouble breathing on Friday and that his oxygen level dropped, prompting his doctors to give him supplemental oxygen while at the White House and decide to transfer him to Walter Reed where he could be monitored with better equipment and treated more rapidly in case of trouble.”

Gabriel Sherman: “One reason Trump could be withholding truth of his condition: he doesn’t want calls for transfer of power to grow. At what point does Cabinet consider 25th amendment?”

A source familiar with President Trump’s health told pool reporters: “The president’s vitals over the last 24 hours were very concerning and the next 48 hours will be critical in terms of his care. We’re still not on a clear path to a full recovery.” That unnamed source who provided more dire information about President Trump’s medical condition after the official briefing appears to be White House chief of staff Mark Meadows, who spoke to reporters without cameras and was caught on a feed asking to be off the record. The Associated Press actually named Meadows as the official contradicting Trump’s own physician. More from Axios: White House enters clean up mode.

Josh Kraushaar: “Arrogance and ignorance are a toxic combination in politics. This week’s case study: The Trump administration’s inability to showcase basic competence and prudence in the middle of a pandemic has crippled the president’s already hobbled campaign, as time for a miraculous turnaround is expiring.”

“In a way, the immediate political implications will be inconsequential. Already trailing Joe Biden badly in the polls, it’s downright implausible that Trump will win any persuadable voters after this week of recklessness. Remember: The week began with news of Trump’s tax avoidance, and nearly ended with controversy over his unwillingness to forthrightly condemn white supremacism. Sandwiched in between was an embarrassing, self-destructive debate performance. Then coronavirus came to the White House.”

“Will the bottom fall out for Republicans, as it did in polling over the summer as he proved himself unable to control the pandemic? That’s a known unknown, complicated by the uncertainty of the president’s long-term prognosis. It’s possible that Trump could benefit from some obligatory bipartisan sympathy as he recovers from his illness. But for a campaign that isn’t planning to stop its negative attack ads during this national moment of crisis—even as the Biden campaign stood down, showcasing some much-needed empathy—it’s hard to see any groundswell of support boosting the incumbent.”

With three Republican senators in quarantine after testing positive for the novel coronavirus, Senate Majority Leader Mitch McConnell (R-KY) announced that floor proceedings will be postponed until October 19th.

However, he said that Senate Judiciary Committee confirmation hearings for Judge Amy Coney Barrett’s nomination to the Supreme Court will convene on October 12th as previously scheduled.

President Trump phoned Rudy Giuliani from his hospital bed Saturday afternoon to declare he feels so healthy, “I could get out of here right now,” the New York Post reports.

The president dictated a statement to Giuliani: “You go tell people I’m watching this coverage. I feel I could get out of here right now. But they’re telling me there can always be a backstep with this disease. But I feel I could go out and do a rally.”

“I am the president of the United States. I can’t lock myself in a room… I had to confront the virus so the American people stopped being afraid of it so we could deal with it responsibly.”

Washington Post: “As Trump’s condition deteriorated during the day Friday, the president and his team ultimately made the decision to send him to Walter Reed preemptively — and, from a public relations perspective, when he was still able to walk to Marine One on his own, according to one outside adviser in frequent contact with White House officials. They feared the possibility of a further decline, and what that might mean, both for the president’s health and his political optics.”

New York Times: “It is not clear exactly when Mr. Trump was infected or by whom, and the White House remained secretive about the circumstances on Friday, declining to provide any account of who made the decision for the president to go to New Jersey or of how Ms. Hicks’s illness was handled on Wednesday and Thursday.”

“But by day’s end, there was little doubt that the virus had been circulating in proximity to Mr. Trump for the past week, even as he disparaged mask wearing and campaigned in person in front of crowds that were not socially distanced.”

Sen. Ron Johnson (R-WI) has tested positive for coronavirus after being exposed to someone with the virus earlier this week, making him the third GOP senator to test positive in 24 hours and threatening the quick confirmation prospects of Judge Amy Coney Barrett to the Supreme Court, CNN reports.

Former Gov. Chris Christie announced he has checked himself into the hospital after testing positive for the novel coronavirus. He said he has a history of asthma.

Donald Trump’s campaign manager Bill Stepien “has tested positive for Covid-19, dealing another blow to his reelection effort on a day that saw the president and the head of the Republican National Committee report contracting the disease as well,” Politico reports. Stepien was experiencing what one senior campaign official described as “mild flu-like symptoms.”

Sen. Chuck Grassley (R-IA) will not be tested for the coronavirus, despite attending a Senate Judiciary Committee meeting with a fellow senator who later tested positive for the virus.

Attorney General William Barr is choosing not to quarantine after recently coming in close contact with members of President Trump’s inner circle who have tested positive for Covid-19, CNN reports.

Claudia Conway just revealed on TikTok that her mom, Kellyanne Conway, has COVID: “She told me not to post this but I’m so furious please wear your masks guys.” Her mother confirmed the news.

David Frum: “Americans are dead who might have been alive if Trump had met the challenge of COVID-19 with care and responsibility—or if somebody else, literally almost anybody else, had been president instead. Millions are out of work, in danger of losing their homes, living in fear. Tens of millions of young people have suffered disruption to their education, which will follow them through life. The pandemic was not Trump’s fault, but at every turn, he made things worse than they had to be—because at every turn, he cared only for himself, never for the country. And now he will care only for himself again.”

“Trump should never have been allowed anywhere near any public office. Wish him well, but recognize that his deformed spirit will never be well—and that nothing can be well for the country under his leadership.”

Multiple sources in the White House and on the Trump campaign have reached out to Jonathan Swan since White House chief of staff Mark Meadows’ statement earlier today and told him they’re utterly perplexed about what’s going on.

“Even his most senior staffers find themselves in the same predicament as those on the outside looking in. An opaque system designed to protect the White House from negative press is backfiring.”

“Let’s not mince words: Washington has been plunged into a crisis of historic proportions, frozen by a disease it is both unwilling and unable to control,” Politico reports.

“Washington crises typically conform to a predictable rhythm: They simmer, boil and come to their expected conclusion. The government shuts down for a few days, but it always reopens. A national security emergency demands an urgent response — and gets one.”

“But this time, America’s capital itself is crippled, leaving the country rudderless, leaderless and riven with bitter partisan fighting in the middle of a pandemic that has already claimed more than 200,000 lives and is nowhere near over.”

New York Times: “This past week, a White House long in denial confronted reality after Mr. Trump and the first lady both tested positive for the virus, along with Hope Hicks, a top White House aide, and Bill Stepien, the Trump campaign manager, among others. The outcome appeared shocking but also inevitable in a West Wing that assumed that rapid virus tests for everyone who entered each morning were substitutes for other safety measures, like social distancing and wearing masks.”

“But the outcome was also a byproduct, former aides said, of the recklessness and top-down culture of fear that Mr. Trump created at the White House and throughout his administration. If you wanted to make the boss happy, they said, you left the mask at home.”

“Vice President Mike Pence in March directed the nation’s top disease control agency to use its emergency powers to effectively seal the U.S. borders, overruling the agency’s scientists who said there was no evidence the action would slow the coronavirus,” the AP reports.

“The action has so far caused nearly 150,000 children and adults to be expelled from the country.”

Eric Trump is scheduled to speak via video on Monday with New York state investigators probing his family’s business practices, the AP reports.

New York Times: “There is no evidence, of course, to support the view that Mr. Trump and his wife, Melania, are anything but ill. As updates on the president’s condition came in, followed by the news that he would be hospitalized, the chatter turned from skepticism that the president was sick to doubts that the White House was being forthright about his condition.”

“Across social media, in interviews, in conversations, the questions poured in all day from people who have heard so many contradictory things over the last four years — a warp-speed whiplash of conflicting realities — that they no longer know what is true.”

Axios: “Some current and former White House officials have been privately complaining about the reckless attitude internally toward social distancing and mask wearing, feeling they are being put at risk unnecessarily every day when they show up to work.”

“The White House has still not adequately explained why Trump went to a donor event in New Jersey on Thursday after learning that one of his closest aides contracted the virus.”

“Even some top West Wing aides were left in the dark about the chain of events that started with Hope Hicks feeling symptoms and isolating on Air Force One on Wednesday, and culminated with the president’s 1 a.m. tweet that he had tested positive.”