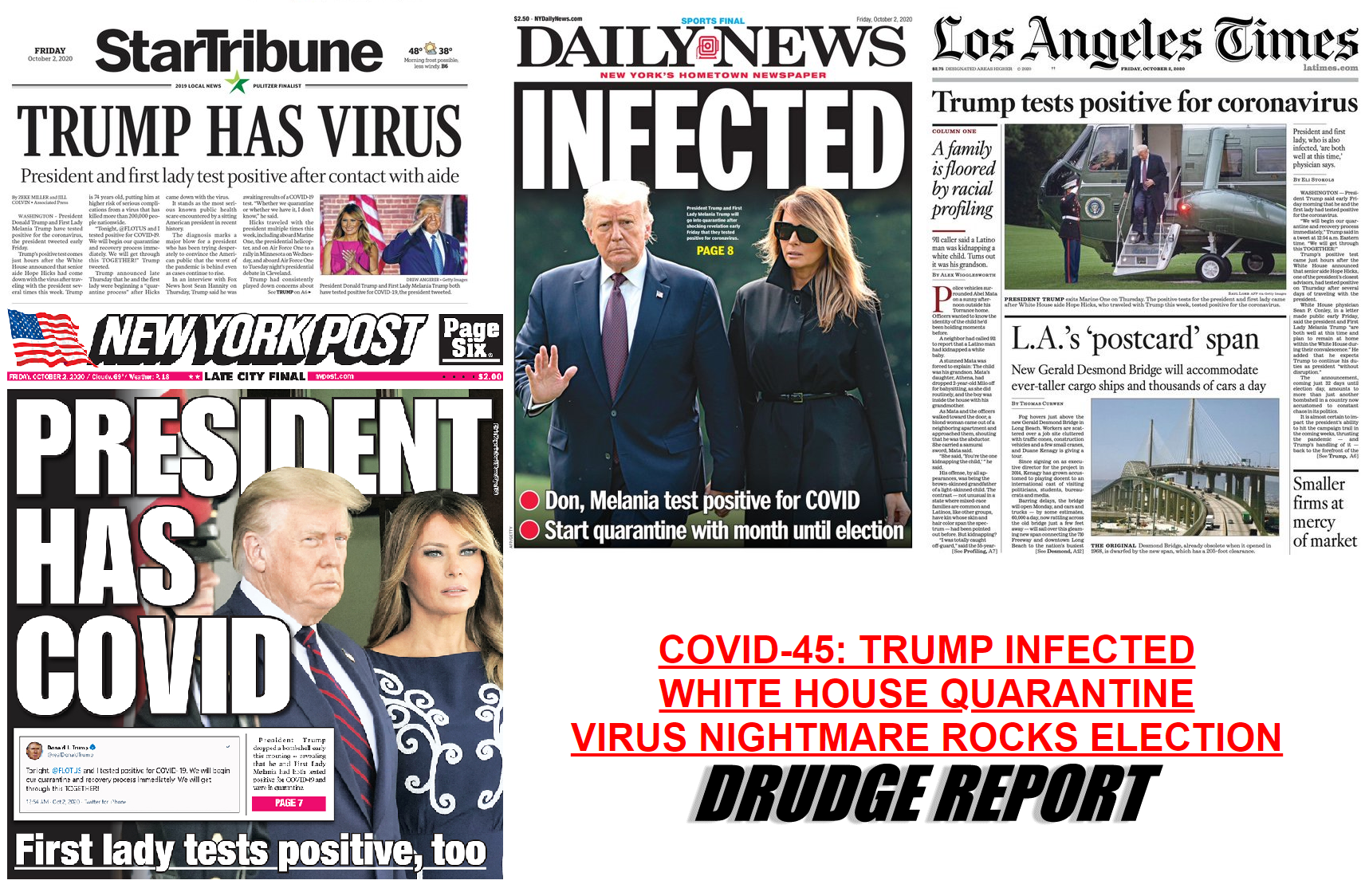 After the President announced his diagnosis of COVID-19 early Friday, his condition quickly deteriorated over the course of Friday. First, the White said he was asymptomatic, then they said he had mild cold-like symptoms, then they said he had a cough and a fever. Some of President Trump’s closest aides sensed on Wednesday that the president was feeling poorly and appeared exhausted,  Bloomberg reports.

The White House doctor then said President Trump “received a single 8 gram dose of Regeneron’s polyclonal antibody cocktail,” CNN reports. And then, it was announced that the President would be immediately taken to Walter Reed Hospital as his condition continued to deteriorate. The White House now saying he will be in the hospital “for a few days.”

Given that the White House is set up with state of the art medical treatment equipment and can handle most things, it is not a good sign that Trump will be at Walter Reed for a few days. His condition is serious and his doctors are probably concerned about his O2 level, meaning that they want him in the hospital in case he needs to be put on a ventilator.

“President Trump skipped out on an afternoon conference call that he was scheduled to join to discuss support for vulnerable seniors amid the coronavirus pandemic,” the Daily Beast reports.

“Trump’s Friday schedule was scrubbed of everything but the 12:15 p.m. call after he announced that he and the first lady had tested positive for the virus.”

Joe Biden announced that he and his wife Jill tested negative for the coronavirus after potentially being exposed at this week’s presidential debate with Donald Trump.  His message: “I hope this serves as a reminder: wear a mask, keep social distance, and wash your hands.”

The Biden campaign is testing those who attended the first presidential debate with the former vice president for Covid-19, Politico reports.

There were at least two private receptions at the White House last Saturday to celebrate the nomination of Amy Coney Barrett to the Supreme Court, the Washington Post reports. The events were attended by “lots of VIPs” and few guests wore masks or observed social distancing.

“Supreme Court nominee Amy Coney Barrett was diagnosed with the coronavirus earlier this year but has since recovered,” the Washington Post reports.

“As the Supreme Court nominee, Barrett is now tested daily and most recently had a negative diagnosis for covid-19 on Friday morning.”

The science is still unclear on whether once you have the virus, you ever stop being a viral carrier. It would be something if ACB was the super spreader in chief. RBG’s last revenge.

Sen. Mike Lee (R-UT) announced he has tested positive for the novel coronavirus. Supreme Court nominee Amy Coney Barrett met with Lee on Tuesday and neither of them wore face masks.

RNC Chairwoman Ronna McDaniel tested positive for the novel coronavirus on Wednesday, the New York Times reports.  She has “mild” symptoms and was last with President Trump a week ago.

Tillis is also a member of the Judiciary Committee and was at the White House event last weekend to unveil the Supreme Court nomination of Amy Coney Barrett.

Nonfarm payroll rose by a lower than expected 661,000 in September in the final jobs report before the November election, CNBC reports.

Economists surveyed by Dow Jones had been expecting a payrolls gain of 800,000.

“Just hours before President Trump announced that he had tested positive for COVID-19, he was mingling with fundraisers at an event held at his New Jersey golf club—and even posed for personal photo-ops with supporters,” the Daily Beast reports.

“The event went ahead after the White House learned that one of the president’s closest aides, Hope Hicks, had tested positive for the disease.”

Washington Post: “After White House officials learned of Hicks’s symptoms, Trump and his entourage flew Thursday to New Jersey, where he attended a fundraiser at his golf club in Bedminster and delivered a speech. Trump was in close contact with dozens of other people, including campaign supporters, at a roundtable event.”

Vox: “On a tape secretly recorded in 2018 and released Thursday night by CNN, the first lady complains to then-friend Stephanie Winston Wolkoff that the media is bothering her about the Trump administration’s policy of separating migrant children from their parents at the US border.”

Said Melania Trump: “They said, ‘Oh, what about the children that they were separated?’ Give me a fucking break. Where they were saying anything when Obama did that?”

“The Obama administration did not, in fact, pursue a policy of separating children from their parents at the border. And Trump’s statements on the tape suggest that, far from secretly disapproving of her husband’s administration, she is actually on board with its aims and angry at those who criticize them. She’s also mad about the ‘liberal media,’ who she believes are treating her unfairly.”

Stat: “The news that President Trump is showing mild signs of Covid-19 infection after testing positive tell us nothing about what the disease might have in store for the commander-in-chief… And they suggest people the president’s age — he is 74 — who develop Covid-19 often have more subtle symptoms initially that may give way to pneumonia and severe illness.”

“One of the common early symptoms among elderly Covid patients is a drop in mental acuity or periods of mild confusion — which would be a disconcerting turn of events, if it were to happen to a sitting president.”

“The critical time to know whether Trump will remain in the former group or progress to more serious disease is a window of between about eight to 12 days after symptoms begin.”

“The Trump administration has no plans to mandate that staff and visitors wear face masks on the grounds of the White House, even after President Trump, the First Lady and senior adviser Hope Hicks tested positive for coronavirus,” Axios reports.

James Hamblin: “Death is not the most likely outcome, but it is far from unlikely. Based on age and sex alone, Trump is at high or very high risk for severe disease. Eight percent of COVID-19 patients ages 65 to 74 die from the disease. Those 75 to 84 are at far higher risk: 18 percent die. And men are significantly more likely to die of COVID-19 than women. Obesity is also predictive of a severe course. Compared with people in the ‘normal’ BMI range, obese patients are 74 percent more likely to be admitted to an ICU and 48 percent more likely to die.”

“The president’s doctors have assured the nation during his time in office that he is in good health and does not have chronic medical conditions. But we know that Trump’s lifestyle does not portend an optimized immune system. His sleep schedule is erratic, he does not exercise, and he subsists on fast food and declines vegetables. He is prone to angry outbursts. These lifestyle factors, taken together, are suggestive of impaired resiliency, and could leave him more susceptible to being laid low by the virus.”

“Current and former national security officials and experts said on Friday morning that they are watching carefully how Iran, China, North Korea and Russia react to the news, particularly when it comes to influence operations and disinformation that they might try to inject into the national conversation in a highly uncertain moment.”

Oscar-winning filmmaker Alex Gibney has been quietly filming a documentary for the past four months titled Totally Under Control, which puts a spotlight on the White House’s failed response to the global pandemic and how it could have been prevented. It will be released in mid-October.

Former New Jersey Gov. Chris Christie (R) told ABC News that nobody in the room working with President Trump as he prepared to debate Joe Biden on Tuesday was wearing a mask.

Said Christie: “No one was wearing masks in the room during that time when we were prepping the president. The group was about five or six people in total.”

New York Times: ““It is not yet clear when and how Mr. Trump contracted the virus. The president and the first lady said they had both tested positive hours after one of his closest aides, Hope Hicks, also tested positive. Ms. Hicks received the diagnosis after she began experiencing symptoms on Wednesday while attending the president’s rally in Minnesota. Mr. Trump kept his appearance there to about 45 minutes, roughly half the length of one of his typical rally speeches.”

“Early Friday morning, it was still unclear how many other aides who had come into close contact with Mr. Trump had tested positive, but the White House said its medical unit was conducting contact tracing. Top advisers to the president described themselves as in a state of shock and said they expected a number of additional cases among people in Mr. Trump’s orbit. White House officials had hoped to keep the news about Ms. Hicks from becoming public, to no avail.”

Andrew Sullivan: “It’s a terrible thing for an elderly person to get this disease, and Trump’s obesity puts him in an even more vulnerable category. No one deserves this, even those, like Trump, who openly defied prudent measures to reduce risk, and thereby helped infect and kill countless others. The president, like any human being, deserves sympathy and support.”

“But there is something salutary in the Trump era about reality reasserting itself in this last twist of the viral knife. The man has spent years at war with reality: living in delusions, perpetuating fantasies, imagining hoaxes, constructing conspiracies, accruing debt, rewriting history constantly as self-serving myth. At some point, reality was going to get personal in return.”