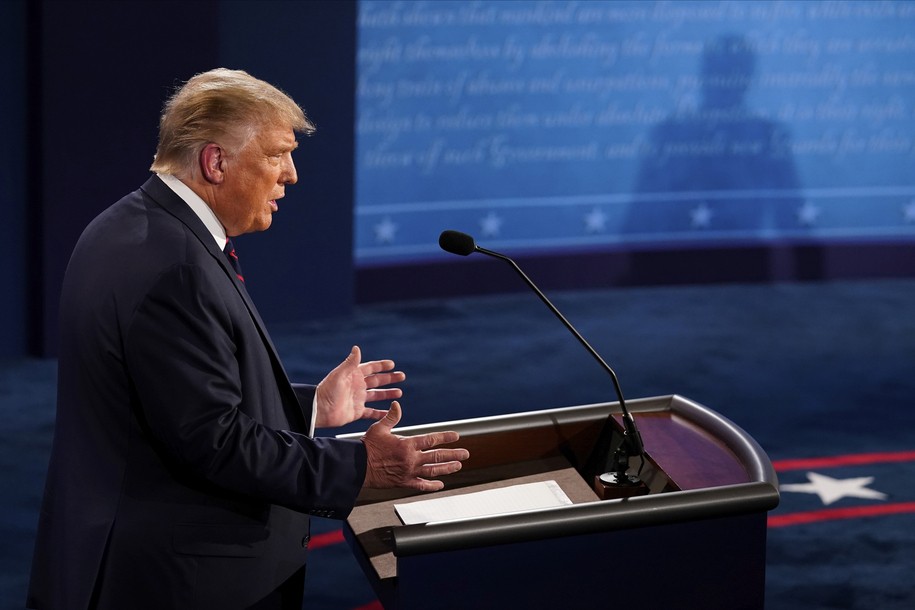 “President Trump said early Friday that he and the first lady have tested positive for the coronavirus, throwing the nation’s leadership into uncertainty and escalating the crisis posed by a pandemic that has already killed more than 207,000 Americans and devastated the economy,” the New York Times reports.

“Mr. Trump received the test result after one of his closest advisers, Hope Hicks, became infected, bringing the virus into his inner circle and underscoring the difficulty of containing it even with the resources of a president.”

“Mr. Trump’s positive test result could pose immediate difficulties for the future of his campaign against Joe Biden, with just 33 days before the election on Nov. 3. Even if Mr. Trump remains asymptomatic, he will have to withdraw from the campaign trail and stay isolated in the White House for an unknown period of time. If he becomes sick, it could raise questions about whether he should remain on the ballot at all.”

Washington Post: “Aides said all of his political events will be canceled for the foreseeable future.”

His close aide, Hope Hicks, had tested positive earlier in the day.

“For the second time in a week, the United States bore witness to an animated and interruption-filled political discussion. The first one was Tuesday’s debate, but Thursday’s White House briefing wasn’t that different,” the Washington Post reports. “And perhaps more than any briefing before it, it reinforced the White House’s credibility problem.”

McEnany declined to denounce white supremacy on behalf of President Trump at her press briefing, which lead to John Roberts’ displeasure above.

“Press secretary Kayleigh McEnany’s briefing was contentious on a level we’ve rarely seen, even in this White House. McEnany attempted to turn aside questions about Trump’s wishy-washy comments on self-declared white supremacists and his dubious claims about mail-in voting, while playing up Supreme Court nominee, Judge Amy Coney Barrett.”

McEnany incorrectly claimed that Supreme Court nominee Amy Coney Barrett is a Rhodes Scholar at her briefing. When a reporter challenger her on that, she initially shot back: “Well, that’s what I have written down.” McEnany eventually admitted Barrett is actually a graduate of Rhodes College in Tennessee.

“Republicans distanced themselves Wednesday from President Trump over his failure to unambiguously condemn white supremacists during the presidential debate the night before, as Mr. Trump faced a torrent of criticism including a rare rebuke from the Senate’s top Republican,” the New York Times reports.

Gabriel Sherman: “Parscale’s public meltdown happened while he is reportedly under investigation for stealing from the Trump campaign and the RNC. According to the source close to the campaign, the Trump family is worried that Parscale could turn on them and cooperate with law enforcement about possible campaign finance violations.” Said a source: “The family is worried Brad will start talking.”

More Gabriel Sherman: “Trump advisers agree on what he needs to do differently at the next debate… But Republicans are resigned to the fact that Trump is unlikely––or unwilling––to course-correct. Said one Republican: “Trump thinks he won. He didn’t. But does anyone have the balls to tell him that? No. They’d be fired.”

“Trump doesn’t accept the consensus that the debate was a disaster because… he was unabashedly himself.” Said the source: “The thing about the debate is people got to see why no one that has any integrity can work for Trump. This is what Trump is like in the Oval Office every day. It’s why John Kelly left. It’s why Jim Mattis quit. Trump doesn’t let anyone else speak. He really doesn’t care what you have to say. He demeans people. He talks over them. And everyone around him thinks it’s getting worse.”

Washington Post: A reminder of how badly Trump needed to have the good debate that he didn’t.

The spending authority of the U.S. had lapsed at midnight.

“Amy Coney Barrett, the Trump administration’s supreme court nominee, publicly supported an organization in 2006 that has said life begins at fertilization,” The Guardian reports. “It has also said that the discarding of unused or frozen embryos created in the in vitro fertilization process ought to be criminalized, a view that is considered to be extreme even within the anti-abortion movement.”

The Daily Beast reports Barrett signed a letter that denounced the legal right to abortion as “barbaric.”

“A tiny religious organization tied to Amy Coney Barrett, Donald Trump’s supreme court nominee, sought to erase all mentions and photos of her from its website before she meets with lawmakers and faces questions at her Senate confirmation hearings,” the AP reports.

“Barrett, a federal appeals judge, has declined to publicly discuss her decades-long affiliation with People of Praise, a Christian group that opposes abortion and holds that men are divinely ordained as the ‘head’ of the family and faith.”

“Former members have said the group’s leaders teach that wives must submit to the will of their husbands.”

Said Flake: “People are voting already, so they know it’s going to be tough to put forward a new narrative. They’re more than a little worried because it feels like even if you go in a different direction, it’d be too little, too late. That’s devastating.”

House Democrats delayed a vote on their own $2.2 trillion stimulus package to give more time for negotiations with the Trump administration, keeping alive hopes for a last-ditch deal, the Financial Times reports. Speaker Nancy Pelosi decided to hold off on the vote after saying she was seeking “further clarification” on a new $1.5 trillion economic relief offer proposed on Wednesday by Treasury Secretary Steven Mnuchin.

“Federal coronavirus aid for airlines expires on Thursday with no renewal in sight, meaning massive layoffs for the industry aren’t far behind,” Axios reports.

“Airline workers aren’t alone on the unemployment line. Oil companies, tire manufacturers, book publishers and insurers are among those that have announced tens of thousands of layoffs. Federal aid through the CARES Act earlier this year delayed most layoffs — until now.”

“A day after fighting for attention in a nearly audience-free debate, President Donald Trump on Wednesday returned to his safe space: an adoring crowd of hundreds who were happy to declare him the winner,” Politico reports.

“Trump visited Minnesota less than 24 hours after the first debate for a fundraiser outside of Minneapolis, followed by a campaign rally in Duluth at an airport hangar. Unlike the previous night, when he was criticized for refusing to condemn white supremacists and for deploying his pugnacious style on the debate stage, Wednesday marked a return to his rallies, where he receives little pushback and tons of applause and feeds off the energy of his base.”

“He kicked off the event here by bragging about what he called high TV ratings for the debate, glossing over any criticism or negative headlines about the lack of substantial discussion.”

Researchers at Cornell University who analyzed 38 million articles about the pandemic in English-language media around the world found that mentions of Trump made up nearly 38 percent of the overall “misinformation conversation,” making the president the largest single source of falsehoods about the pandemic, the New York Times reports.

“President Trump will hold more large-scale campaign rallies in Wisconsin this weekend as coronavirus cases and hospitalization rage across the battleground state, making the clear decision to prioritize campaigning rather than worry about more people getting sick,” ABC News reports.

“Wisconsin, which is a must-win state in the president’s path to victory, is in the midst of an alarming surge of coronavirus cases just a month before the election — an unprecedented political curveball that could alter Wisconsin voters’ opinions on who they trust to handle the pandemic, as more are personally impacted by the virus.”

Jonathan Chait: “Republicans assert as a matter of course that, should Democrats win full control of government, they will eliminate the legislative filibuster and grant statehood to D.C. and Puerto Rico. Joe Biden has been much more circumspect, professing his hope that Senate Republicans will have a change of heart and negotiate in good faith to pass important elements of his program.”

“Of course, both sides have an incentive to shade the truth. Republicans want to motivate their supporters by emphasizing the stakes of losing the Senate and the White House. Biden wishes both to disarm nervous Republican crossover voters, and to maintain his idealistic pitch that he can heal American divisions by bringing the parties together.”

“But I suspect it is not just spin that is causing the two parties to provide such radically opposed assessments of Biden’s intentions. Republicans believe Democrats will maximize their power because that is what they would do… But Democrats, or at least some of them, harbor a genuine nostalgia for the bygone days of bipartisanship.”

The economic collapse sparked by the pandemic is triggering the most unequal recession in modern U.S. history, delivering a mild setback for those at or near the top and a depression-like blow for those at the bottom, according to a Washington Post analysis.

Recessions often hit poorer households harder, but this one is doing so at a scale that is the worst in generations.

“Anyone who joins Biden’s transition team must pledge not to trade individual stocks without the approval of the transition’s general counsel. Biden’s campaign has a similar stock-trading rule in place.”

“For decades, North Korea’s ruling Kims portrayed themselves as quasi-gods, incapable of error. Now, as the country faces some of its toughest challenges in years on several fronts, leader Kim Jong Un is taking a different approach. He is showing himself to be fallible — even human,” the Wall Street Journal reports.

“With the country contending with the coronavirus pandemic, flood damage and economic sanctions, Mr. Kim is apologizing, admitting policy missteps and visiting disaster zones. He has ordered officials to stop ‘mythicizing’ his family as it could ‘hide the truth,’ according to state media.”

“The outward expressions of humility aren’t a sign of weakness, security experts say, but rather an indication that Mr. Kim sees himself as operating from a position of strength, as he sits atop a nuclear arsenal that he claims can strike the U.S. mainland. It also suggests the Kim regime won’t be in a rush to rekindle nuclear talks with the U.S. to win economic relief.”