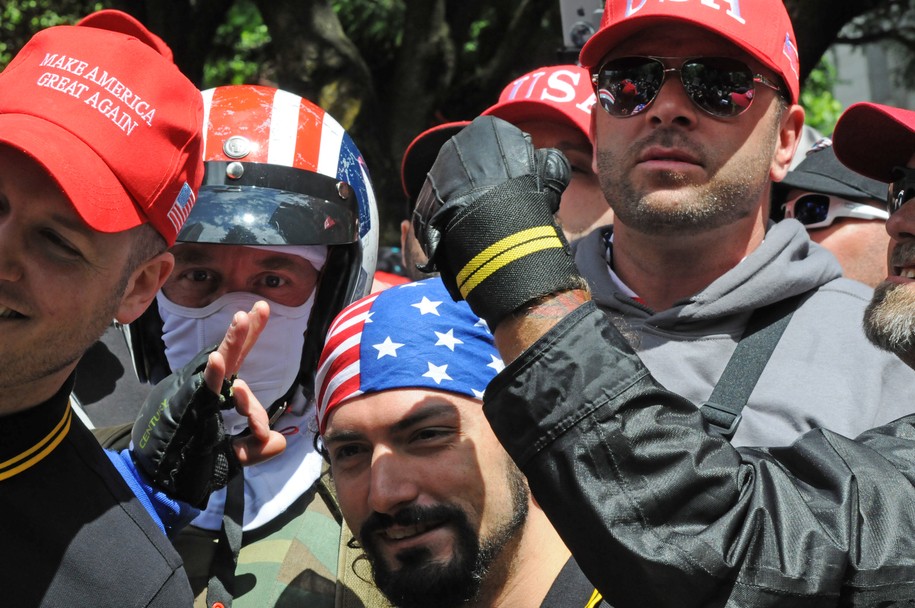 President Trump claimed he doesn’t know who the “Proud Boys” are, after saying at the presidential debate last night that the far-right group should “stand back and stand by” in response to a question asking him to condemn white supremacists, Axios reports.

Former Sen. Rick Santorum (R-PA) told CNN that it was a “huge mistake” for President Trump not to condemn white supremacy during the first presidential debate.

Said Santorum: “But for some reason, he didn’t and I think that was a huge gaffe. And it’s been typical of the president when he gets backed into a corner he doesn’t like to be forced to say something. He made a huge mistake.”

Josh Marshall: “Rage, narcissism, self-loathing, fear – each vividly on display. We got a clear view [Tuesday] night of something very basic about this moment. The country isn’t so much facing an election as a hostage negotiation. Trump is losing, probably not just the presidency but his immunity from the law. Does it he come peacefully? Or is he one of those degenerates who kills his wife and kids on the way out? If he’s going to lose he wants to burn the country down. As my vivid and ugly analogy suggests, this isn’t strategy. It’s instinct. It’s rage.”

Tennessee Gov. Bill Lee (R) is ending all statewide coronavirus restrictions on businesses and gatherings, the Tennessean reports. Said Lee: “I want the economy to move forward. I don’t want any business to have any reason to not function as fully as they possibly can.”

Indi Sajarajiva: “I lived through the end of a civil war — I moved back to Sri Lanka in my twenties, just as the ceasefire fell apart. Do you know what it was like for me? Quite normal. I went to work, I went out, I dated. This is what Americans don’t understand. They’re waiting to get personally punched in the face while ash falls from the sky. That’s not how it happens.”

“This is how it happens. Precisely what you’re feeling now. The numbing litany of bad news. The ever rising outrages. People suffering, dying, and protesting all around you, while you think about dinner. If you’re trying to carry on while people around you die, your society is not collapsing. It’s already fallen down…”

“As someone who’s already experienced societal breakdown, here’s the truth: America has already collapsed. What you’re feeling is exactly how it feels. It’s Saturday and you’re thinking about food while the world is on fire. This is normal. This is life during collapse.”

Judge Amy Coney Barrett “was slated to meet with nine GOP senators in her first foray to the Capitol since she was unveiled as Trump’s pick in a Rose Garden ceremony Saturday — visits that were largely ceremonial in nature and only publicly affirmed the near-unanimous Republican support for the appellate court judge,” the Washington Post reports.

“Meanwhile, behind the scenes, GOP officials were working at a rapid clip to move her nomination through the Senate Judiciary Committee, which had sent Barrett the usual nominee questionnaire on Sunday as lawyers and aides continued to vet her paperwork ahead of at least three days of confirmation hearings beginning Oct. 12.”

“Though Democrats cannot stop Barrett’s nomination, they can force floor votes to protest going on recess or holding committee hearings longer than two hours. Those tactics could force Republicans to put up enough votes to overcome the 47-member Democratic minority, dragging vulnerable GOP senators off the campaign trail.”

Supreme Court nominee Amy Coney Barrett “did not commit to recusing herself from cases related to the outcome of the 2020 presidential election, according to her written responses to a Senate Judiciary Committee questionnaire,” Politico reports.

“The Trump administration is preparing an immigration enforcement blitz next month that would target arrests in U.S. cities and jurisdictions that have adopted ‘sanctuary’ policies, according to three U.S. officials who described a plan with public messaging that echoes the president’s law-and-order campaign rhetoric,” the Washington Post reports.

The operation “could begin in California as soon as later this week. It would then expand to cities including Denver and Philadelphia.”

“Robert Redfield, the director of the Centers for Disease Control and Prevention, was overruled when he pushed to extend a ‘no-sail order’ on passenger cruises into next year,” Axios reports.

“Public health officials have privately complained that the thwarting of Redfield on the cruise ship ban is politically motivated because the industry is a major economic presence in Florida — a key battleground state where the polls are statistically tied.”

Vox: “While on a weeklong trip to Europe, Secretary of State Mike Pompeo planned to sit down with Pope Francis during a visit to the Vatican. But the Catholic leader refused the photo ops and handshakes with America’s top diplomat out of one major concern: That he’d be a pawn in Trump’s reelection efforts.”

On Tuesday, followers of QAnon — a collective delusion that alleges President Trump is fighting a Satanist cabal of elites who abuse children — targeted him, leading to death threats.

New York Times: “President Trump’s angry insistence in the last minutes of Tuesday’s debate that there was no way the presidential election could be conducted without fraud amounted to an extraordinary declaration by a sitting American president that he would try to throw any outcome into the courts, Congress or the streets if he was not re-elected.”

“His comments came after four years of debate about the possibility of foreign interference in the 2020 election and how to counter such disruptions. But they were a stark reminder that the most direct threat to the electoral process now comes from the president of the United States himself.”

“The House adopted a resolution on Tuesday to affirm the chamber’s support for a peaceful transfer of power after President Trump last week declined to commit to it if he loses reelection,” The Hill reports.

“Lawmakers adopted the measure in a bipartisan 397-5 vote, with all of the votes in opposition coming from Republicans.” The five Republicans voting no are Matt Gaetz, Louis Gohmert, Steve King, Thomas Massie and Clay Higgins.

Politico: “The health department’s $300 million-plus, taxpayer-funded vehicle to boost confidence in President Trump’s response to the pandemic is sputtering. Celebrities are refusing to participate, and staff are arraying against it. Some complain of the unstated aim of helping Trump’s re-election.”

“Others point to an ill-prepared video team and a 22-year-old political appointee who has repeatedly asserted control despite having no public health expertise.”