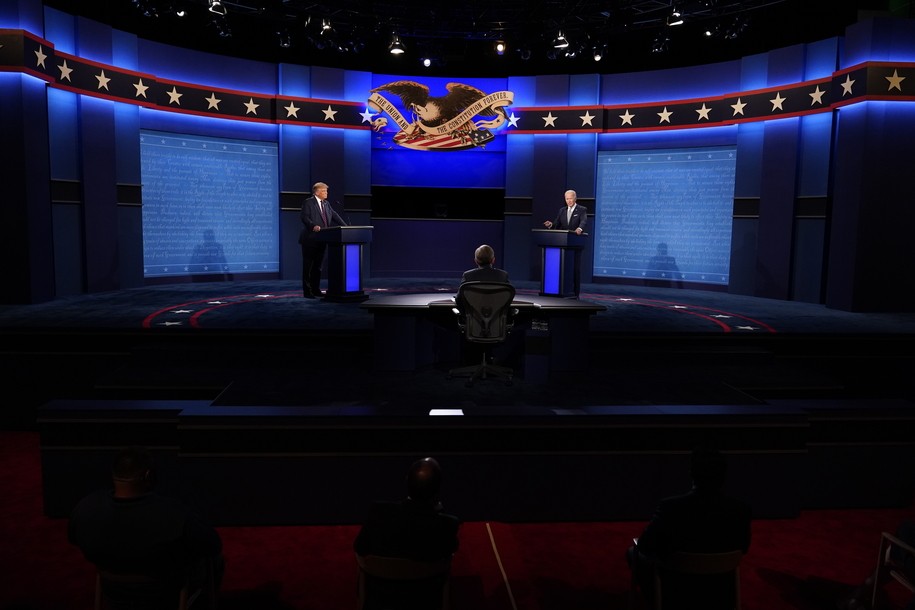 What was not a particularly strong night for Joe Biden (he did fine, but I have some critiques below) was saved by an absolutely horrible performance in both style, tone and substance by Donald Trump. The two major soundbites and headlines coming out of this debate are when Joe Biden spoke for all humans saying “Will you just shut up man?” and when the President once again refused to denounce, and in fact encouraged, white supremacy in general and the Nazi group Proud Boys in particular.

The President trashed Hunter Biden with lies about a gift from Moscow and then mocked his having a drug addiction, which the Vice President pointed out that he is proud that he recovered from. The attack on Hunter’s past drug problem was probably a step to far for most normal people who also most likely have former or current drug addicts in their family.

The President then dishonored Beau Biden’s service when refused to thank Beau for his service or honoring his sacrifice by even acknowledging it, preferring instead to attack Hunter instead.

The President refused to count every vote, and refused to have an orderly election, preferring instead to order his supporters to intimidate voters at polling places. Yes, he literally said that. He also refused to have a peaceful transition of power when he loses (and after this debate, I’d say it’s a virtual lock that he will lose now, but more on that in a second).

Joe Biden was most effective, and good, when he ignored the bully and spoke directly to the camera and to the American people. He did that often and it worked. Even as a jaded politico, I felt, during this train wreck of a debate, reassured that there was at least one caring and reasonable adult on stage. But Biden let some opportunities to hit Trump slide. And it seemed at times that he was frustrated, flustered and somehow caught off guard by Trump’s constant interruptions. In a certain respect, if Trump planned his style of constant screaming and interruption tonight to throw Biden off the track, then Trump’s plan worked. Biden also didn’t appear to be as sharp and fast on his feet in responding to Trump’s fire hose of ranting and lies as he was during the CNN Town Hall and during the conventions. I suspect Biden will be much better on that score during the next Town Hall debate.

Finally, as I said above, this Trump debate performance was absolutely planned. It was a strategy. He didn’t meltdown or lose control. He was doing it all on purpose. So you have to ask yourself, are these Trump campaign people and Trump himself absolutely fucking stupid? You are the underdog in this election. You are about to become the first President to lose reelection in a wipeout landslide fashion since Jimmy Carter lost to Reagan by 10 points. You had to reassure or convince some moderate swing voters who may have voted for you in 2016 but now have regrets, or are not yet sold on Biden, that you are the safe option to return to the White House. What Trump did was designed to please only his Nazi base. It frightened and exasperated everyone else. Not a single undecided voter was convinced to vote for Trump after last night. Furthermore, Trump’s performance regarding the Proud Boys guarantees that this horrible debate performance remains the number one story for the next week. Trump is losing. Badly. Every day of this campaign that Trump doesn’t win means he is losing all the more.

Josh Marshall: “The most important fact about this debate is that going into it President Trump was clearly behind. He needed to shift the dynamic of the race, force some major error, introduce some new factor. That didn’t happen. I saw nothing tonight that seems at all likely to improve things for President Trump. Nothing.

To the extent there was any strategy to Trump’s ranting – and I think it was mainly instinctual – it was to create chaos in the hope that it would throw Biden off his stride and prompt some scattered or damaging moment. That didn’t happen. It was really just Trump yelling. That was the strategy his surrogates previewed. And if he had triggered some embarrassing flub perhaps it would have been a winning strategy. Everybody knows Trump’s a bully and a loudmouth. That’s not new information. But maybe it would be worth it if he forced some major error from Biden. He didn’t. And so what we had was Trump ranting, visibly angry, launching off on numerous digressions, lying. It was ugly, unhinged and exhausting – a good summary of Trump’s entire presidency.

One thing that struck me was that the few times when Biden was able to speak uninterrupted for 30 or 60 seconds he was actually devastating against Trump. I was thinking, Trump’s right to keep interrupting. When Biden gets to talk it’s terrible for Trump.

Biden spent a lot of time simply laughing at Trump. That made for a good visual and it also clearly enraged the President. That spurred Trump to be even more self-injuring. It made him more spluttering. Donald Trump is the President of the United States. And yet half the time during this spectacle he looked like the loudmouth yelling taunts and insults outside a party he’s pissed he wasn’t invited to. He looked weak and angry.

There are definitely people who think Biden didn’t seem strong enough reacting to or containing Trump’s tirades. Basically I don’t think this is right. Clearly Biden isn’t really quite able to keep up with Trump’s antics. I don’t say that because of age. It’s just characterologically beyond him, for better or worse. But Biden’s not running for arguer. He held his own and simply showed himself to be a very different kind of person, a very different kind of potential President. That’s a win for him. Trump talked a lot more. In a sense he did “dominate” the debate. But most of it was self-injuring.”

The Proud Boys, a far-right extremist group, pledged allegiance to President Trump on Tuesday night after he told the group to “stand back and stand by” during the evening’s debate, NBC News reports.

“Trump was asked by debate moderator Chris Wallace to disavow white supremacy during a portion of the debate focused on race… But Trump did not denounce any far-right or white supremacist groups, and then pivoted to talk about antifa.”

“Democratic voters who have requested mail ballots — and returned them — greatly outnumber Republicans so far in key battleground states, causing alarm among GOP party leaders and strategists that President Trump’s attacks on mail voting could be hurting the party’s prospects to retain the White House and the Senate this year,” the Washington Postreports.

“Of the more than 9 million voters who requested mail ballots through Monday in Florida, Pennsylvania, North Carolina, Maine and Iowa, the five battleground states where such data is publicly available, 52% were Democrats. Twenty eight percent were Republicans and 20% were unaffiliated.”

Dan Balz at the Washington Post: “No one alive has ever seen a presidential debate like Tuesday night’s unseemly shout fest between President Trump and former vice president Joe Biden — 90 minutes of invective, interruptions and personal insults. It was an insult to the public as well, and a sad example of the state of American democracy five weeks before the election.

“On the margins, the debate probably did more to help Biden than the president, at a moment when Trump needed to change the shape and trajectory of the campaign. But that’s not what people will remember. Even partisans locked into their choices were probably dispirited at what they were witnessing. One can only imagine what the next two debates between the two men will look like.”

Zack Beaucamp: “The two biggest moments of the first 2020 Biden-Trump presidential debate, when put together, reveal just how much danger American democracy is in.

The first moment came when moderator Chris Wallace asked President Trump to condemn white supremacists and tell them to refrain from violence. When Trump demanded a specific group to criticize, Vice President Joe Biden supplied one: the Proud Boys. Trump did the opposite.

“Proud Boys, stand back and stand by,” the president said, immediately adding: “I’ll tell you what, somebody’s got to do something about antifa and the left.” “Standing down and standing by sir,” the group’s official account wrote on Telegram, a messaging app commonly used by extremists.

The second moment came at the very end, during a discussion of Trump’s (false) claims about widespread voter fraud in the 2020 election. Wallace asked Trump if he would “urge his supporters to stay calm” and “pledge tonight that you will not declare victory until the election has been independently certified.” Trump responded by once again doing the opposite, calling on his fans to engage in behavior that sounds a lot like voter intimidation.”

Ryan Lizza: “Tuesday was different for three reasons. First, Trump, the king of powerfully simplistic political branding, no longer seems to have a message. … In 2016, Trump had a clear and concise line of attack against Hillary Clinton: she was a corrupt member of the Washington establishment and he was going to send her to jail if he became president. He discussed the alleged perfidy of her deleting personal emails with impressive discipline. But Biden has proven to be a more elusive target. …

“Finally, and most important, Trump in 2020 is burdened with a record, one that has sunk him into chronic unpopularity for several years now, even during the height of his economic boom. Trump was not the first American politician to successfully win an election by casting himself as a populist outsider taking on the corrupt establishment. That playbook is as old as the republic.”

Talking Points Memo: “President Trump’s erratic and unhinged debate performance earned a swift round of rebukes late Tuesday from prominent journalists and commentators who seemed stunned by what they witnessed.

[CNN’s Dana] Bash put it bluntly: “that was a shit show.” […] Bash’s CNN colleagues Jake Tapper, Wolf Blitzer and Abby Philip echoed similar sentiments. Tapper called the debate “a hot mess inside a dumpster fire inside a train wreck.”  Philip said it was “a complete disaster.” Blitzer agreed that it was “the most chaotic presidential debate” he had ever seen, adding that the first debate between Trump and Biden raises “a lot of questions about the future of a presidential debate between these two candidates.”

“Director of National Intelligence John Ratcliffe on Tuesday declassified a Russian intelligence assessment that was previously rejected by Democrats and Republicans on the Senate Intelligence Committee as having no factual basis,” Politico reports.

A new Morning Consult poll finds a record-high 62% of voters support the Affordable Care Act, including 85% of Democrats and 36% of Republicans.

Also interesting: 56% of voters say the ACA should be improved and strengthened, while 20% say the law should be struck down and 9% say it should be left alone.

“The 44-year-old is also being investigated for ‘pocketing’ nearly another $10 million from the Republican National Committee.”

Meanwhile, Business Insider reports that “before Parscale’s meltdown on Sunday that landed him in police custody, his spending as a top Trump campaign official had been under scrutiny.”

“It’s unclear whether a campaign-spending audit and scrutiny over his luxurious purchases precipitated Parscale’s latest troubles.”

“Scott Reed, the longtime top political strategist for the U.S. Chamber of Commerce, said Tuesday that he resigned from the organization after a political shift at the business lobbying powerhouse,” Politico reports.

“The move comes amid mounting fears among Republicans — including many within the organization — that the traditionally conservative Chamber is moving to the left after endorsing roughly two dozen freshman House Democrats for reelection this year.”