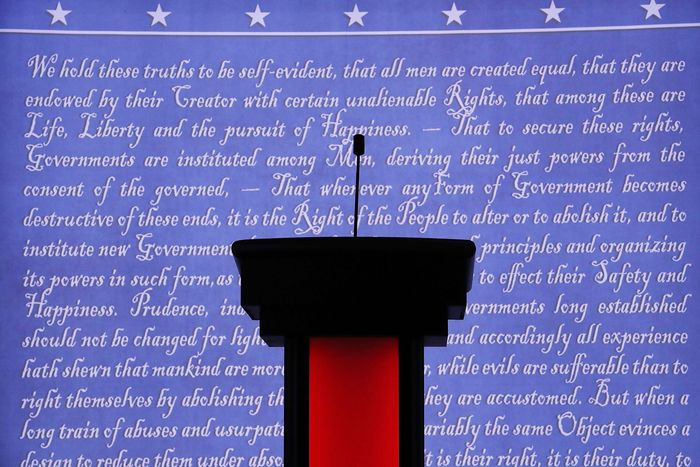 The Cook Political Report catches up to our consensus electoral map by moving Iowa and Ohio into the Toss Up column.

“Iowa and Ohio join Florida, Georgia, North Carolina and Maine’s 2nd CD in Toss Up. That leaves just one state, Texas, in Lean Republican. Biden is in the enviable position of not having to win any of those states to get to 270, while Trump has to win all of them, plus another two states (22 Electoral votes) to win the Electoral College.”

Alan Abramowitz: “In 2016, Donald Trump shocked the political world by pulling off a victory in the Electoral College despite losing the popular vote by more than two percentage points. The key to his victory was winning several large swing states including Florida, Michigan, Pennsylvania, and Wisconsin by very narrow margins. Based on recent polling data, however, Trump appears unlikely to duplicate his 2016 feat. He is currently trailing in every 2016 swing state, including Florida, Michigan, Pennsylvania, and Wisconsin, although the margin in Florida is very close. Meanwhile, he is being forced to invest time and money defending several states that he won easily in 2016. In contrast, Joe Biden appears to be comfortably ahead in every state that Hillary Clinton won in 2016.”

“Barring a major comeback in the final weeks of the campaign or very large and systematic polling errors, the incumbent appears to be headed for a decisive defeat in both the popular vote and the electoral vote.”

CNN reports President Trump “is preparing to go after Hunter Biden for getting lucrative jobs overseas when his father was vice president that he will say the younger Biden was not qualified for. Trump and his allies have repeatedly made unfounded and false claims to allege that the former vice president and his son acted corruptly in Ukraine.”

“Their hope is that it knocks Biden off his game — either causing him to blow up or say something incorrect.”

“Biden’s team has been working with him to be ready for Trump to go after his son in a way he hasn’t had to deal with as directly before. Trump advisers have also spent time working with the President to stay calm if Biden retaliates by invoking Trump’s daughter and son-in-law, both White House aides with no previous government experience. A source familiar with Biden’s prep, however, says his plan is to pivot away from this issue, not engage.”

Associated Press: “The president’s attacks on Biden have been scattershot and inconsistent, frustrating some Republicans who believe he has squandered repeated opportunities to define his rival. His efforts to move past the coronavirus pandemic and onto issues he views as more favorable for his reelection prospects, including law enforcement and the economy, have failed to convince many voters that the public health crisis is any less of a concern or that his leadership during the pandemic has been effective.”

“Even Trump’s rollout of Judge Amy Coney Barrett as his Supreme Court nominee on Saturday, a pick aimed at energizing conservative voters, was overshadowed the very next day by bombshell revelations in The New York Times about his personal finances.”

Joe Biden and his running mate Sen. Kamala Harris released their 2019 federal and state tax returns, hours before the former vice president meets face-to-face with President Trump in the first debate of the 2020 presidential race, The Hill reports.

“Donald Trump and Joe Biden kick off their first debate Tuesday with contentious topics like the Supreme Court and the coronavirus pandemic suddenly joined by yet another potentially explosive question — whether the president ducked paying his taxes,” Bloomberg reports.

“For Biden, the report that Trump minimized his tax bill allows him to draw a distinction, in his words, ‘between Scranton and Park Avenue’ — his symbols for abundant wealth and the working-class environment into which he was born in Pennsylvania.”

“For Trump, spokesman Hogan Gidley said, the campaign welcomes a discussion on taxes — even if it’s about the candidate avoiding paying them — so the Trump camp can highlight what it says is Biden’s plan to raise taxes once in office.”

Vanessa Williamson: Biden could use Trump’s returns to shift the debate on taxes.

Yahoo News: “To nip any disaster scenario in the bud, they say, Biden also needs to flip one or more ‘nail-in-the-coffin states’ — that is, the ones that on election night itself could quickly and decisively prove that Trump has no remaining path to victory.”

“Ohio, the site of this year’s first presidential debate, could be Biden’s best option.”

Chesley “Sully” Sullenberger, who famously landed an airliner on the Hudson River in 2009, cut a new ad for the Lincoln Project saying President Trump “has failed us so miserably.”

Said Sullenberger: “Eleven years ago I was called to my moment. Now we are all called to this moment.”

“I would know. In the last cycle, I had a unique assignment: playing Trump’s stand-in during Hillary Clinton’s mock debates. Before donning the ill-fitting suit I had tailored, my preparation included studying the 11 Republican primary debates in which Trump participated, watching each three times: once start to finish; then only exchanges involving Trump; and finally only Trump, standing at a lectern in my living room with the sound off to focus entirely on his gestures and body language.”

Geoffrey Skelley: “All in all, past surveys and research suggest that The Times’s latest story — which is more significant in scope and covers a more recent part of Trump’s business dealings than past revelations — could put a dent in how the public views Trump’s business acumen. Whether that actually happens may come down to how much sustained media attention the story receives. For example, will the first presidential debate, on Tuesday night, dwell on Trump’s tax returns?”

“If the tax returns do stay in the spotlight, there is reason to think they could hurt Trump electorally. For one, Trump is an underdog for reelection at the moment and the clock is ticking — any day during which he’s not making up ground is a problem. But the malleability of voters’ views of Trump’s business record is also notable because we have reason to think Trump’s business credentials played at least some role in his electoral success in 2016, and may continue to undergird some of his support today.”

The Biden campaign slammed Facebook as “the nation’s foremost propagator of disinformation about the voting process,” Axios reports. Wrote Biden campaign manager Jen O’Malley Dillon: “Rather than seeing progress, we have seen regression… Facebook’s continued promise of future action is serving as nothing more than an excuse for inaction.”

Aaron Blake notes that the Democratic candidate has carried the Philadelphia suburbs by between 7 and 17 points in every presidential race since 2004. Trump’s deficit there in the new New York Times-Siena poll is 24 points and in the new Washington Post-ABC News poll is 38 points.

McKay Coppins: “The president’s alliance with religious conservatives has long been premised on the contention that he takes them seriously, while Democrats hold them in disdain. In speeches and interviews, Trump routinely lavishes praise on conservative Christians, casting himself as their champion. ‘My administration will never stop fighting for Americans of faith,’ he declared at a rally for evangelicals earlier this year. It’s a message his campaign will seek to amplify in the coming weeks as Republicans work to confirm Amy Coney Barrett—a devout, conservative Catholic—to the Supreme Court.”

“But in private, many of Trump’s comments about religion are marked by cynicism and contempt, according to people who have worked for him. Former aides told me they’ve heard Trump ridicule conservative religious leaders, dismiss various faith groups with cartoonish stereotypes, and deride certain rites and doctrines held sacred by many of the Americans who constitute his base.”

Ryan Lizza: “After watching hours of Trump’s debates from 2015 and 2016, what comes across in hindsight is that he had an under-appreciated style, strategy, and message. He was not the Donald Trump of Twitter, where he launches his crudest attacks. He was not the Donald Trump of MAGA rallies, where he feeds off the crowd and plays a role that is a mix of demagogue, right-wing pundit, and entertainer.”

“The matchup with Biden will be much different. Trump is an unpopular incumbent with a record to defend. He no longer has as clear a message as he did in 2016. Biden has the benefit of four extra years to study Trump.”

“But the conventional wisdom about Trump arriving in Cleveland Tuesday as a manic and extremely, well, Trumpy, debater could be wrong. Trump won the Republican nomination partly on the strength of his debate appearances. And while post-debate polls were generally favorable to Hillary in 2016, Trump’s three general election debates were crucial to his victory.”

A new Politico/Morning Consult poll found that just 20% of voters said that they believed the winner of the presidential election will be called on election night, while 66% said they expect it to happen sometime later.