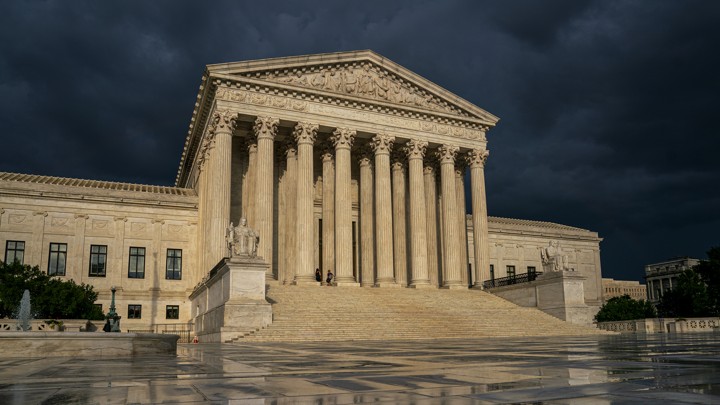 The Senate Judiciary Committee will begin confirmation hearings for President Trump’s Supreme Court nominee — assumed to be Judge Amy Coney Barrett — on October 12, with the next two days set aside for questioning, Bloomberg reports.

Assuming she clears the Republican-led committee, a full Senate vote is planned for the week of October 26 — the week before the election.

“Roman Catholics account for a bit more than 20% of the U.S. population, yet they are on track to hold six of the Supreme Court’s nine seats now that President Donald Trump is expected to nominate Amy Coney Barrett to fill its vacancy,” the AP reports.

“It’s a striking development given that the high court, for most of its history, was almost entirely populated by white male Protestants. Catholic academics and political analysts offer several explanations for the turnaround – related to Catholics’ educational traditions, their interest in the law, and – in the case of Catholic conservatives – an outlook that has appealed to recent Republican presidents filling judicial vacancies.”

Roberts, Alito, Kavanaugh, Sotomayor, Thomas and Barrett are Catholic. Gorsuch is a Protestant. Breyer and Kagan are Jewish.

Jeffrey Toobin: “There should be no doubt about why Barrett, barring any late-breaking surprises, would be chosen. Much of the commentary about her selection would focus on the issue of abortion, and her likely role in overturning Roe v. Wade. During the 2016 campaign, Trump repeatedly promised to appoint Justices who would vote to overrule that landmark, and with his three selections, including Neil Gorsuch and Brett Kavanaugh, he appears to have delivered.”

“Still, it’s worth remembering the real priorities of Trump and Mitch McConnell, the Senate Majority Leader, in this nomination. They’re happy to accommodate the anti-abortion base of the Republican Party, but an animating passion of McConnell’s career has been the deregulation of political campaigns. The Supreme Court’s Citizens United decision brought the issue to wide public attention, but McConnell has been crusading about it for decades. He wants the money spigot kept open, so that he can protect his Senate majority and the causes for which it stands…”

“Barrett is a product of this movement, and not just because she clerked for Scalia. Her writings and early rulings reflect it.”

Politico: “The two sides have decided to forego the traditional pre-debate handshake in light of the virus, according to a person with direct knowledge of the negotiations. They also won’t do an elbow-bump, a coronavirus-era handshake substitute which both campaigns saw as awkward.”

“Neither Trump nor Biden nor the debate moderator, Fox News host Chris Wallace, will wear masks.”

“And unlike past presidential debates, there will be a limited audience of only 75 to 80 people, all of whom will be tested prior to attending the debate.”

Associated Press: “Trump has decided to skip any formal preparation. And while Biden’s team believes the significance of the debate may be exaggerated, the Democratic nominee has been aggressively preparing to take on the president.”

“Biden’s campaign has been holding mock debate sessions featuring Bob Bauer, a senior Biden adviser and former White House general counsel, playing the role of Trump… Bauer has not actually donned a Trump costume in line with Trump stand-ins from previous years, but he is representing his style and expected strategy.”

Joe Biden is dismissing President Trump’s refusal to say he’d accept the results of the election if he loses as a “typical Trump distraction” and predicted that voters will understand that those comments are designed to make them “wonder whether or not the election will be legit,” NBC Newsreports.

Said Biden: “I don’t think it’s going to go anywhere. I think the American people are on to this guy.”

Dan Balz: “Each week has brought evidence of the damage President Trump has done during his nearly four years in office. According to his own words, he is not finished. This past week brought a renewed warning of a harm he could yet inflict on the integrity of elections.”

“The president did more than simply refuse to pledge that he would facilitate a peaceful transfer of power if he loses to former vice president Joe Biden, though that in itself was a step no previous president has taken. In doing so, he escalated his ongoing attack on mail-in ballots, seeding the ground to contest the election as rigged or fraudulent if he is not the winner and to propel the country into chaos.”

“Perhaps what Trump said merely reflected the mind-set of a president who knows he is running behind in his bid for a second term, one more rhetorical flailing to somehow throw the opposition off balance and to distract from the real reasons for Biden’s lead in the polls. But this close to the election, anything Trump does to question the validity of the count should be regarded as serious and treated as such.”

Dana Millbank: “For five years, my colleagues and I have taken pains to avoid Nazi comparisons. It is usually hyperbolic, and counterproductive, to label the right ‘fascists’ in the way those on the right reflexively label the left ‘socialists.’ But this is no longer a matter of name-calling.”

“With his repeated refusals this week to accept the peaceful transfer of power — the bedrock principle that has sustained American democracy for 228 years — President Trump has put the United States, in some ways, where Germany was in 1933. That is when Adolf Hitler, the appointed leader, used the suspicious burning of the German parliament to turn a democracy into a totalitarian state.”

This is quite an interview: Australian television anchor Leigh Sales put Sarah Huckabee Sanders on the hot seat over President Trump’s lies — and her own lies when she served as his press secretary.

A new Joe Biden ad, New Start, signals an effort by his campaign to make unity a central theme.

Washington Post: “Several of their recent confirmation battles, as well as their strategy during the impeachment trial of President Trump, focused on complaints about how the Senate GOP majority steamrolled the minority party’s rights. This process-centric approach produced polling that the public backed the Democratic position, but they lost the bigger battles and the issue often faded from relevance.”

“Instead, in sync with Joe Biden’s presidential campaign, Democrats want to replicate their successful 2017 fight to preserve the Affordable Care Act, which peeled off enough GOP senators to defeat Trump’s bid to repeal the health law. They remain skeptical of defeating this particular nominee, expected to be Judge Amy Coney Barrett, but Democrats believe this policy-focused message could propel them to big wins in the November elections.”

“A federal judge ruled Friday that President Trump’s leading steward of public lands has been serving unlawfully, blocking him from continuing in the position in the latest pushback against the administration’s practice of filling key positions without U.S. Senate approval,” the AP reports.

“U.S. Interior Department Bureau of Land Management acting director William Perry Pendley served unlawfully for 424 days without being confirmed to the post by the Senate as required under the Constitution.”

“The Trump administration rescinded an award recognizing the work of a journalist from Finland last year after discovering she had criticized President Trump in social media posts, then gave a false explanation for withdrawing the honor, according to a report by the State Department’s internal watchdog,” the Washington Post reports.

“The report tracks how the discovery of the journalist’s remarks worried senior U.S. officials and prompted a decision to withdraw the honor to avoid a possible public relations debacle.”

“Facing crackdowns from tech companies that limit the reach of their content, leaders in the QAnon conspiracy theory movement have been urging their followers to drop the ‘QAnon’ label from their wide-ranging conspiracy theories and simply refer to their fight against a fictitious cabal of powerful baby-eating politicians without their increasingly problematic branding,” NBC News reports.

“The shift in tactics comes the same week as Twitter released new data stating that their ban on QAnon-related accounts was severely limiting the reach of the conspiracy theory.”

Washington Post: “Fewer than 1 in 10 Americans showed signs of past infection with the novel coronavirus as of late July, suggesting that most of the country may still be vulnerable to infection, according to one of the largest studies of its kind published Friday in the journal The Lancet.”