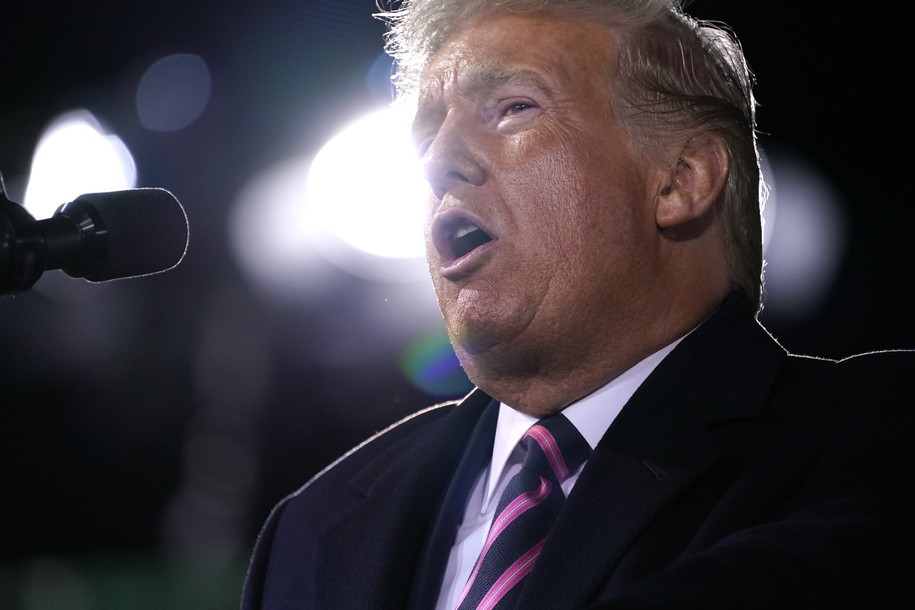 President Trump intends to choose Amy Coney Barrett to be the new Supreme Court justice, CNN reports. In conversations with some senior Republican allies on the Hill, the White House is indicating that Barrett is the intended nominee.

President Trump thinks the uproar over his refusal to promise a peaceful transition of power was “funny as hell,” the Daily Beast reports.

“According to two people familiar with the matter, hours after the president stepped away from the cameras, Trump continued following the fallout in the press, including on cable news, and began privately remarking how amusing it was that his answer was making media and liberal heads explode, and also predictably dominating TV coverage.”

Said one source: “He seemed to get a real kick out of it.”

Politico: “The Senate is taking America for one last turbulent ride before the election. … After Trump’s reveal, GOP leaders are expected to quickly lay out a hearing schedule for October, and the nominee will begin meeting with individual senators next week.”

“Provided no surprising information is unearthed that upends the nomination, Republicans and Majority Leader Mitch McConnell are set to make history: Never has a Supreme Court justice been confirmed so close to a presidential election. Other than two dissenting GOP senators, no one thus far in the 53-member conference is arguing to wait for a lame duck session — let alone the next Congress — to hold a confirmation vote. McConnell only needs a simple majority.”

“A federal judge has stopped the 2020 census from finishing at the end of September and ordered the once-a-decade head count of every U.S. resident to continue for another month through the end of October, saying a shortened schedule likely would produce inaccurate results,” the AP reports.

President Trump suggested without evidence that his political opponents were orchestrating delays to the development of a coronavirus vaccine in order to undermine him in the election, the Daily Beast reports.

Said Trump at a rally: “We will have a vaccine so soon, you won’t even believe it, although they are trying to do a little bit of a political hit. ‘Let’s delay the vaccine just a little bit.’ Did you notice that?”

“President Trump is pushing advisers to deliver health-care ‘wins’ in the final weeks of the campaign, leading to a frenzied rollout of proposals as polls show the president’s handling of the coronavirus pandemic and health-care policy are two of his biggest vulnerabilities in his reelection bid,” the Washington Post reports.

President Trump outlined his health care “vision,” which he had pledged to release two months ago, CBS News reports. The president said he will sign an executive order that lays out that vision, but the executive order has no legislative power.  There were very few specifics given.

A new report says President Trump has engaged in “more than 3,400 conflicts of interest since taking office.”

“Joe Biden’s search for a Treasury secretary is widely seen as focusing on Lael Brainard of the Federal Reserve, a choice that would keep both Wall Street and progressives in line,” Bloomberg reports.

“The more provocative choice of Sen. Elizabeth Warren hasn’t been ruled out but is far less likely.”

“The White House has started its outreach to key senators who will play influential roles in the confirmation fight for President Trump’s yet-to-be-named nominee to the Supreme Court, a sign that the administration is preparing to move rapidly once the president reveals his pick Saturday afternoon,” the Washington Post reports.

“White House officials have asked several members, both Democratic and Republican, of the Senate Judiciary Committee if they would like to meet personally with the nominee starting next week.”

Virginia Gov. Ralph Northam and Virginia First Lady Pamela Northam have tested positive for coronavirus, WTOP reports. The governor has no symptoms, while his wife has mild symptoms.

One man walked up to Ruth Bader Ginsburg’s casket in the U.S. Capitol and started doing push-ups as he paid his respects.

It was her trainer, Bryant Johnson, the New York Times reports.

Senate Majority Leader Mitch McConnell (R-KY) is on the “list of regrets” for the ceremony honoring Ruth Bader Ginsburg at the Capitol today, where she is the first woman ever to lie in state, NBC News reports.

“A senior executive at the U.S. Postal Service delivered a PowerPoint presentation in July that pressed officials across the organization to make the operational changes that led to mail backups across the country, seemingly counter to months of official statements about the origin of the plans,” according to internal documents obtained by the Washington Post.

“President Trump has lost patience with the head of the US Centers for Disease Control and Prevention, Dr. Robert Redfield, as well as with the other public health experts on his coronavirus team because their sober messaging on the future of the pandemic clashes with his rosy assessments,” CNN reports.

“Trump believes that breakthroughs are not coming swiftly enough… Trump’s frustrations have caused some to question whether Redfield is on the chopping block, but a Trump adviser said they did not expect the President to make major staffing changes before the election.”

Said Meadows: “With all due respect to Director Wray, he has a hard time finding emails in his own FBI.”