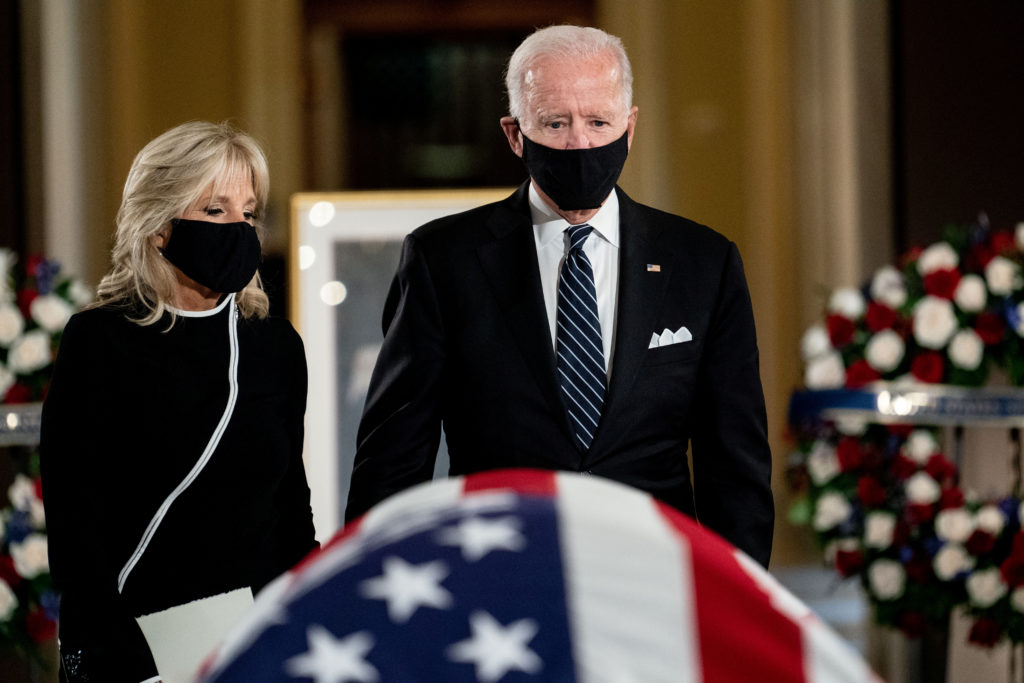 Gallup: “Americans’ opinions of the Republican Party have soured since January but are similar to what they were a year ago. Meanwhile, Americans’ favorability ratings of the Democratic Party (47%) have been stable and again surpass those of the GOP (42%).”

A new Washington Post-ABC News poll finds 57% of Americans oppose efforts by President Trump and the Republican-led Senate to fill a Supreme Court vacancy before the presidential election, with most supporters of Joe Biden saying the issue has raised the stakes of the election.

When asked who was more of a wimp, a new Emerson College poll finds 57% of voters said Donald Trump while 43% said Joe Biden.

A new Quinnipiac poll finds 51% of Republicans said they trust President Trump over CDC scientists when it comes to the coronavirus pandemic.

New York Times: “In order to achieve a new 6-3 conservative majority on the court, Republicans are poised to defy a clear majority of voters who have indicated in polls that they want the winner of the election to pick a nominee for Justice Ruth Bader Ginsburg’s seat. They are even willing to energize Democratic turnout in the short run by elevating issues like abortion, if it means achieving the long-term goal of tilting the court further to the right.”

“They believe a partisan fight over the court offers them at least a chance to steer the debate away from political danger zones like the president’s handling of a virus that has claimed over 200,000 American lives and his unceasing rhetorical eruptions, most recently his indication that he would be unwilling to agree to a peaceful transition of power.”

Google informed its advertisers that it will broadly block election ads after polls close Nov. 3, Axios reports. Big Tech platforms have been under pressure to address how their ad policies will handle conflicts over the presidential election’s outcome.

Sen. Susan Collins (R-ME) has voted for 95% of President Trump’s federal judicial nominees, according to a National Journal analysis of Senate records.

“She voted against 10 nominees, including McConnell’s prioritized judges on powerful appellate courts, because of their lack of professional experience or because of their views on the Affordable Care Act, LGBTQ rights, or abortion rights. All 10 were nonetheless confirmed, and she didn’t oppose any nominees in the first two years of the Trump administration when Republicans controlled the Senate by a narrower margin.”

“Michael Bloomberg announced Friday that he’s blanketing Florida airwaves with a $40 million TV ad buy, the first since he pledged to spend $100 million in the Sunshine State to defeat President Trump,” Politicoreports.

“The massive buy comes the same week that nearly 5 million vote-by-mail ballots are being sent to Florida voters in the the start of what effectively is a month-long Election Day in the nation’s largest swing state.”

“Senior Pentagon leaders have a lot to worry about — Afghanistan, Russia, Iraq, Syria, Iran, China, Somalia, the Korean Peninsula. But chief among those concerns is whether their commander in chief might order American troops into any chaos around the coming elections,” the New York Times reports.

“The concerns are not unfounded. The Insurrection Act, a two-century-old law, enables a president to send in active-duty military troops to quell disturbances over the objections of governors.”

“Michigan lawmakers voted Thursday to made it easier for clerks to process a surge in absentee ballots in the battleground state’s presidential election by letting them start a day earlier than normal,” the AP reports.

“Barack Obama endorsed Raphael Warnock’s (D) U.S. Senate campaign, becoming the latest Democrat to rally behind the pastor’s challenge to Sen. Kelly Loeffler (R) as pressure mounts on his rivals to drop out of the free-for-all race,” the Atlanta Journal Constitution reports.

“The development comes as Warnock aims to consolidate Democrats behind his campaign – and his allies urge Matt Lieberman (D), another Democrat in the contest, to abandon his bid.”

“Republicans are shifting their campaign focus toward the looming Supreme Court fight over replacing the late Justice Ruth Bader Ginsburg in hopes that it will inject a last-minute boost into President Trump’s reelection bid and the battle for the Senate majority,” the Washington Post reports.

“But some in Trump’s orbit are questioning that strategy, privately fretting that the move to quickly confirm a conservative replacement for the liberal icon will backfire and energize the left in key battlegrounds states. And behind the scenes, some Senate GOP advisers also acknowledge that this could spell bad news for at least two GOP incumbents — Susan Collins in Maine and Cory Gardner in Colorado — fighting for their political lives in Democratic-leaning states, even as they predict it could bolster other vulnerable senators.”

David Wasserman “finds that if 2016’s turnout and support rates were applied to 2020’s new demographic realities, Trump would narrowly lose Florida, Michigan, Pennsylvania and Wisconsin — more than enough to swing the presidency to Joe Biden.”

“And, Trump would lose the popular vote by about four points, roughly double his 2016 deficit.”

Said Trump: “Nobody’s seen this before, these cards are incredible. The cards will be mailed out in coming weeks, I will always take care of our wonderful senior citizens. Joe Biden won’t be doing this.”

“Sending coupons to that many Medicare beneficiaries would cost at least $6.6 billion. Two senior White House staff said the money can be used as part of a Medicare program, called the 402 demonstration, that tests innovations that could save money or improve the quality of care in Medicare.”

Stat: “That regulation has also not yet been implemented — meaning the Trump administration is effectively pledging to spend $6.6 billion in savings that do not currently exist.”

Interest in pre-Election Day voting is skyrocketing around the country, with more than 28 million ballots already requested and another 43 million set to be automatically mailed to voters, according to a CNN survey of election offices in 42 states and Washington, DC — another sign of what is expected to be a record-shattering turnout.

“The Justice Department on Thursday released details about an investigation into nine discarded mailed-in ballots in Pennsylvania, an unusual step that stoked new fears that President Trump’s political appointees were using the levers of law enforcement to sow doubt about the election,” the New York Times reports.

Politico: “Election experts and lawyers are bewildered by a press release from the Department of Justice, in which the department said it had begun an inquiry into a handful of military ballots in a northeastern Pennsylvania county. Most unusually, the release revealed that the voters had cast their ballots for President Trump.”

A Justice Department official told ABC News that Attorney General William Barr personally briefed President Trump about the DOJ’s investigation into a small number of ballots in Pennsylvania that were found to be discarded, prior to the information being made public.

President Trump went on to first reveal the investigation in an interview with Fox News Radio, where he, without evidence, argued that it bolsters his baseless claims of widespread fraud in mail-in voting.

Chris Hayes: “Yes, but did they do it on a tarmac? That’s all that counts.”

Philip Bump: What we know about those discarded ballots in Pennsylvania.