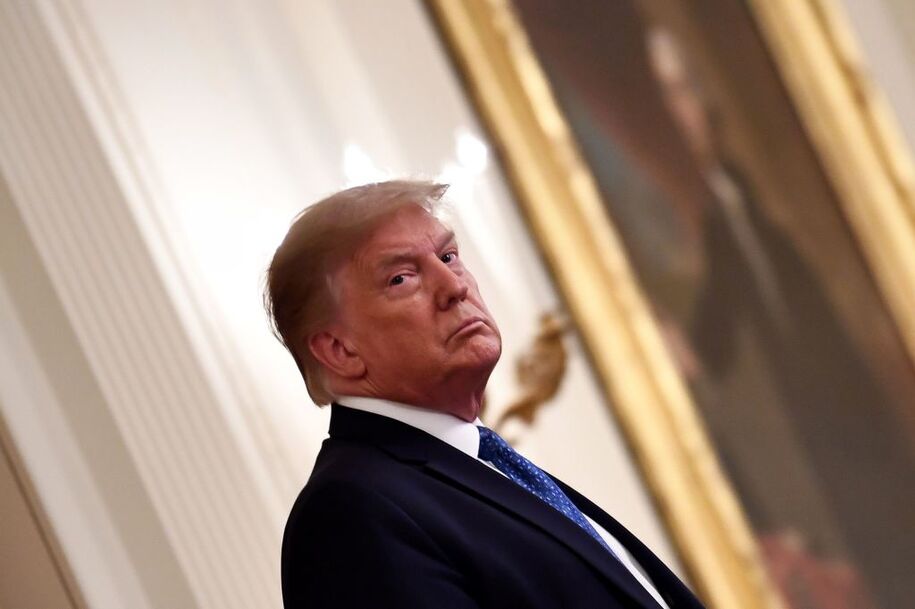 One of the features of our electoral system is that there is not one presidential election on November 3. There are at least 50. And sometimes more as different states have counties that have different voting systems, as we learned in Florida in 2000. And in each state, it is the individual county and state boards of election that count the votes. Not Donald Trump. Each individual state certifies the vote count. Not Donald Trump.

All week long we are treated to Trump’s dictatorial wishes, and then press pieces saying Democrats are cowering in fear of what Trump will do. Like this Politico piece: “Republicans can no longer truthfully deny that Trump may be unwilling to leave office in the event he is defeated. And Democrats must now confront the possibility they may not have the power to stop him.”

The power to stop him? He can’t say “I’m not leaving” and have that pronouncement have the affect of law, of nullifying the election. As Alby says, wake up scaredy cats.

Trump cannot just stay in office no matter what. His constitutional term ends on January 20, 2021.

It does not matter that Trump refuses to concede. The Constitution does not say that the incumbent President must consent to his own defeat.

It does not matter that Trump will contest the election. All the votes will be counted. Absent any evidence of fraud, Trump’s lawsuits will be defeated just as his lawsuits against allowing mail in votes have been defeated all year long.

You want more evidence that Trump is full of shit? His own team is planning on a peaceful transfer of power. Politico reports that the White House “is carefully developing plans for that very outcome,” Politico reports. “One of the most organized and functional parts of the Trump White House these days is a surprising place — the West Wing office planning a potential presidential transition.”

Listen to Michelle Goldberg: “Trump may be behaving like a strongman, but he is weaker than he’d like us all to believe. Autocrats who actually have the power to fix elections don’t announce their plans to do it; they just pretend to have gotten 99 percent of the vote. It’s crucial that Trump’s opponents emphasize this, because unlike rage, excessive fear can be demobilizing. There’s a reason TV villains like to say, ‘Resistance is futile.’”

“It’s also true that by floating the idea of refusing to concede, Trump begins to normalize the notion… One of the most oft-used metaphors for the Trump years has been that of the slowly boiling frog. (The frog, in this case, being democracy.) By threatening what is essentially a coup, Trump may have turned the heat up too quickly, forcing some elected Republicans to implicitly rebuke him by restating their fealty to a constitutional transfer of power.”

“But if history is any guide, those Republicans will adjust to the temperature. The next time Trump says something equally outrageous, expect them to make excuses for him, or play some insulting game of whataboutism by likening Biden’s determination to count ballots past Nov. 3 to Trump’s refusal to recognize the possibility of defeat.”

Also listen to Asha Rangappa:”It is important to take note and be prepared for the unprecedented actions Trump says he intends to take after the election. But it is also important not to allow his *wishful* reality to *become the reality. To do that, consider Trump’s psychological POV right now: Every time Trump spouts this kind of garbage, he is revealing that he is TERRIFIED. Ab. So. Lute. Ly. Terrified. His **existential** fear is losing. And he knows that there is a very good chance he is going to lose. And he can’t do a damn thing about it. He will be a LOSER.”

“Remember that in pretty much every instance Trump has faced like this in the past, he’s had an exit strategy. He walks away. But he can’t get out of the election. He’s like a mail-order bride who has to go through with it. Except in his case, if he loses, he may end up in jail.”

“This situation is like the coronavirus. He understands the reality, he knows he can’t escape it, so his only option is to create an alternate reality. Reality, however, caught up with him with COVID. So it is up to YOU to make sure the same happens with the election.” […]

“We have a process in place for elections. That process will be followed, whether he likes it or not. Every vote will be counted. Due to the high volume of mail-in votes, there will be delay in reaching a final result, which is proof that our process is WORKING.”

Have some confidence, people. Stand tall and laugh at Trump dictatorial wishes. Stand tall and vote. Do not be intimidated by any Trump goons on Election Day. Vote early if you can. Vote by mail if you can, but do it as soon as you receive the ballot, and try to drop it off in the drop boxes provided: