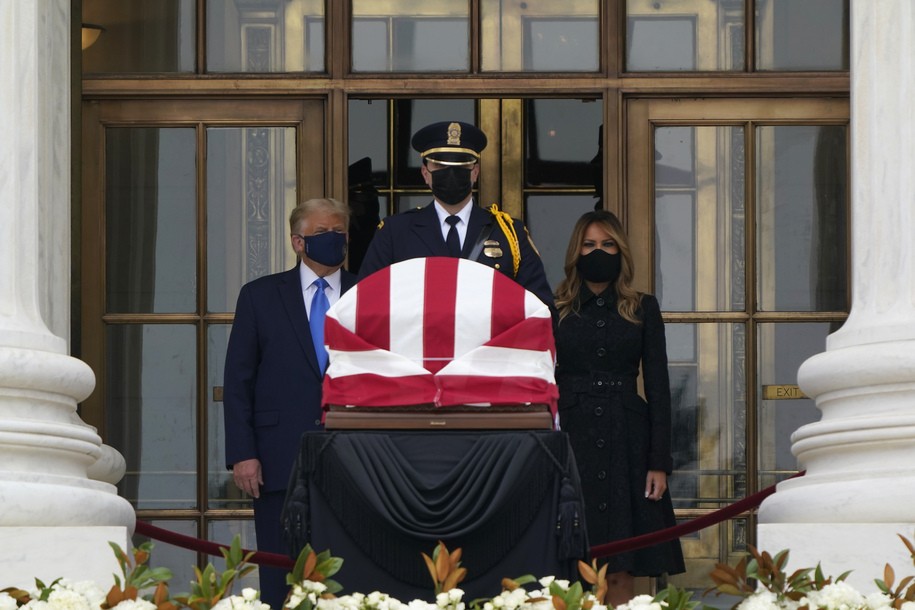 Nate Cohn: “The most recent New York Times/Siena College polls of Texas, Iowa and Georgia found no serious evidence that the Supreme Court vacancy has affected the race for the White House. Nor did the polls find much reason to think this would shift the race in the weeks ahead.”

“The surveys were already underway before the death on Friday of Justice Ruth Bader Ginsburg, and neither Joe Biden nor President Trump fared meaningfully better in interviews conducted after her death.”

Here’s a fun time sink from the Cook Political Report: The Swingometer allows you to adjust turnout among different demographic groups to see how they might affect the Electoral College tally.

Here are the national polling averages with 40 days left in previous races:

Jim VandeHei: “Polls show the path for Biden is quite plausible: He is winning in Wisconsin, Michigan and Pennsylvania, and essentially even in Florida — all Trump states in 2016.”

“And remember: Trump lost the popular vote by 3 million last time to a much more unpopular Democrat, Hillary Clinton.”

“Biden, thanks in part to changing demographics, is running close or better in red states Texas, Georgia, Arizona, Iowa and North Carolina.”

As President Trump arrived at the Supreme Court to pay his respects to Justice Ruth Bader Ginsburg the crowd chanted “vote him out,” which as CNN reporter Kevin Liptak notes, is a rare chance for this president to see his opposition this up-close and in-person.

Ron Brownstein: “The struggle over Ruth Bader Ginsburg’s replacement on the Supreme Court could help propel Democrats to the brink of a Senate majority in November’s election. But whether it lifts them over that threshold could turn on the terms of the confirmation fight. Given the nature of the states that will decide Senate control, the Democrats’ path to a majority may be much easier if they can keep the debate centered on economic issues—particularly the survival of the Affordable Care Act—rather than social issues, especially abortion.”

“The reason: The confirmation fight is likely to further weaken the position of endangered Republican senators in Colorado, Maine, and Arizona—states where polls show that a solid majority of voters support legal abortion. But even if Democrats flip all three, they will still likely need to win one more seat to take the majority. And in the next tier of states where they could possibly flip a seat, the politics of abortion will make that more difficult.”

A new CNN poll finds 59% of voters say that the president elected in November should be the one to fill the Supreme Court vacancy created by the death of Ruth Bader Ginsburg.

The Economist: “Democrats can take heart from polling that shows rural voters everywhere have cooled a bit on Mr Trump. He still has a 14-point lead in rural places, but that is well short of his 22-point advantage four years ago. Commentators seem not to have noticed that Mr Biden has so far gained a bigger swing in rural places than he has in the suburbs.”

FBI Director Christopher Wray said that the agency has “not seen, historically, any kind of coordinated national voter fraud effort in a major election, whether it’s by mail or otherwise,” Axios reports.

The FBI issued a warning that 2020 presidential election results may take days or weeks to certify and that foreign actors may spread disinformation about the results in the interim. “I would encourage people to be critical thinkers, and to get their news from a variety of sources and make up their own mind and be a skeptical, discerning electorate — which is what I think is the best defense against malign foreign influence.” — FBI Director Christopher Wray, quoted by CBS News.

After months of bashing vote-by-mail and saying it will lead to a rigged and fraudulent election, President Trump encouraged Florida voters to request their mail ballots.

Texas Gov. Greg Abbott (R) “is facing a lawsuit over his extension of early voting for the November election from prominent members of his own party — including state party Chairman Allen West, Agriculture Commissioner Sid Miller and members of the Texas Legislature,” the Texas Tribune reports.

Data obtained by the Associated Press shows “postal districts across the country are missing by wide margins the agency’s own goals for on-time delivery, raising the possibility that scores of mailed ballots could miss deadlines for reaching local election offices if voters wait too long.”

“Missing a deadline is a key reason mail-in ballots get rejected.”

“Democrats spent the early months of the coronavirus pandemic urging their base to vote absentee. But as threats of U.S. Postal Service delays, Team Trump litigation and higher ballot rejection rates become clearer, many are pivoting to promote more in-person voting as well,” Axios reports.

“Democrats are exponentially more likely to vote by mail than Republicans this year — and if enough mail-in ballots are lost, rejected on a technicality or undercounted, it could change the outcome of the presidential election or other key races.”

“Two recently retired four-star officers who served under President Trump have joined a group of nearly 500 national security leaders in endorsing Joe Biden and condemning the commander in chief they served,” Politicoreports.

The letter is the latest in a series of calls for Trump’s defeat in the November election.

Said Gaetz: “This is what the Loeffler team went to the Trump team with. They went and said, ‘Look, you guys gotta get Doug Collins out of this race’… She said, ‘I have $50 million for this project, and I can either spend my $50 million getting new voters and helping the Trump campaign, or I can spend that $50 million taking out Doug Collins.’”

“Undaunted by criticism, Secretary of State Mike Pompeo is forging ahead with a series of events that have overtly political overtones ahead of the November presidential election,” the AP reports.

“Casting aside a long tradition of the nation’s top diplomat shunning partisan politics, Pompeo gave a speech on Wednesday in the swing state of Wisconsin, marking his participation in the fourth event this month alone that goes well beyond what previous secretaries of state have done in support of the presidents they have served.”

Said Trump: “Chris is good, but I would be willing to bet that he won’t ask Biden tough questions. He will ask tough questions of me and it will be unfair, I have no doubt about it. He will be controlled by the radical left.”

The Democratic super PAC Priorities USA has identified Pennsylvania as the current tipping point state most likely to represent the 270th electoral vote and will spend an additional $7.3 million to support Joe Biden for president.

“Faced with a shrinking cash balance, Trump has pulled back on television ads in all but three states where the race is close: Arizona, Florida and Georgia. And his ads have disappeared from must-win states like Ohio and Iowa, where he and Biden are essentially tied.”

Politico: “Trump and his aides are betting that Catholic voters will feel enough of a kinship with either of the women he is eyeing for the vacancy — 7th U.S. Circuit Court of Appeals Judge Amy Coney Barrett, a Catholic mother of seven, or 11th Circuit Judge Barbara Lagoa, a Catholic mother of three — that his nomination of one of them will lock in a majority of the Catholic vote just in time for the November election.”

“On the other hand, they are hoping Catholic voters who have already swung toward Biden, due to grievances with the president’s behavior or policies, will return to Trump’s column if the former vice president remains quiet as Senate Democrats and progressive activists knock the faith of his impending nominee.”

“The influx of Michael Bloomberg election cash in Florida is yielding yet another million dollar ad buy to make the case for Democratic presidential nominee Joe Biden, this time in a $6 million Spanish-language TV and radio blitz that will run in major media markets throughout the key battleground state,” the Miami Herald reports.