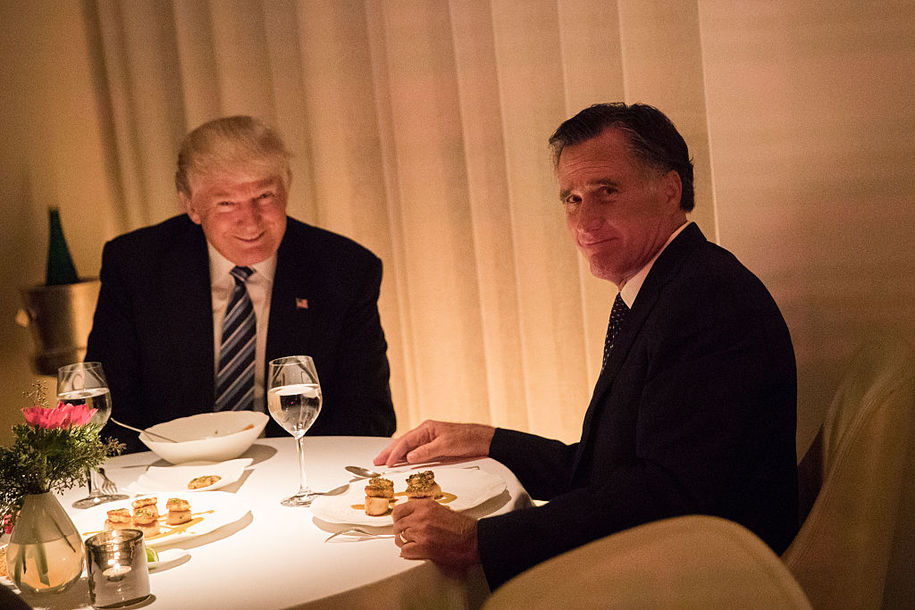 “Just two Republican senators have asked for the party to put the breaks on the confirmation. And with a 53-seat majority, Senate Majority Mitch McConnell (R-Ky.) now has the votes he needs to move forward with a nominee to replace the late Justice Ruth Bader Ginsburg.”

White House chief of staff Mark Meadows told Fox News that President Trump will announce his nominee for the Supreme Court on Saturday. Trump confirmed this timeline on Twitter.

Senate Majority Leader Mitch McConnell (R-KY) was asked how he justified moving forward with a Supreme Court vote, when Justice Ruth Bader Ginsburg’s dying wish was for the next president to fill her seat. Said McConnell: “I prefer another thing she said recently, which was she thought the number on the Supreme Court ought to be nine.”

Sen. Susan Collins (R-Maine) said on Tuesday that she will vote against a Supreme Court nominee if one is brought to the Senate floor before the November election, The Hill reports. Said Collins: “I made it very clear, yes, that I did not think there should be a vote prior to the election. And if there is one, I would oppose the nominee.”

Playbook: “In considering when a Supreme Court nominee will get a floor vote, think of this: McConnell will move when he has the votes — and not a minute sooner, or later. There is a genuine desire in the White House and Capitol Hill to hold the vote before the election — and that will happen if McConnell has the votes, which he appears to be racking up quickly.”

Washington Post: “Two Trump advisers said the president told others on Monday that he was leaning toward Amy Coney Barrett — a Catholic conservative who fended off attacks on her religion during her appeals court confirmation hearing — because it would help with his base, particularly evangelical voters.” “President Trump plans to meet with shortlisted Supreme Court candidate Barbara Lagoa during a campaign visit to Florida on Friday,” Axios reports.

“Sources who know both Trump and Lagoa say they still expect the president to pick Judge Amy Coney Barrett, but they view the Lagoa meeting as a wild card because they say she has a charismatic personality that would appeal to Trump.”

Justice Ruth Bader Ginsburg will be the first woman ever to lie in state at the U.S. Capitol, per accessible historical records, Kasie Hunt reports.

The coronavirus has now killed 200,000 Americans, according to Johns Hopkins data. Axios: “Whatever context you try to put this in, it is a catastrophe of historic proportions — and is yet another reminder of America’s horrific failure to contain the virus.” Said Jennifer Nuzzo researcher to the AP: “It is completely unfathomable that we’ve reached this point.”

“It affects elderly people. Elderly people with heart problems and other problems. If they have other problems that’s what it affects, that’s it. You know in some states, thousands of people — nobody young. Below the age of 18, like — nobody… It affects virtually nobody. It’s an amazing thing.” — President Trump, falsely downplaying the risks of the coronavirus.

Jonathan Bernstein: “This is monstrous behavior from any elected official. Imagine how those who have lost young loved ones to the pandemic feel when their pain is erased by the president. Or for that matter, anyone who has lost someone who doesn’t qualify as ‘elderly … with heart problems and other problems.’ Imagine how it feels for those who have been severely ill but recovered, when their suffering too doesn’t count for Trump.”

Gabriel Sherman: “With 43 days left until the election, Trump is itching for a fight as he moves quickly to fill Ruth Bader Ginsburg’s seat.” Said one GOP source: “This nomination is a fuck-you to the left.”

“The SCOTUS drama has infused the Trump campaign with renewed optimism after it has been battered by weeks of devastating book bombshells, widening polls, and a U.S. coronavirus death toll nearing 200,000. Just one day after Ginsburg’s death, the MAGA faithful were chanting, ‘Fill that seat!’ at Trump’s North Carolina rally—and the campaign is already selling T-shirts with the slogan. Sources said Trump sees selecting Ginsburg’s replacement as if he is scripting a new story line in the reality show he’s producing.”

Washington Post: “The agency is issuing the guidance to boost transparency and public trust as it approaches the momentous decision of whether a prospective vaccine is safe and effective.”

“Public health experts are increasingly worried that President Trump’s repeated predictions of a coronavirus vaccine by Nov. 3, coupled with the administration’s interference in federal science agencies, may prompt Americans to reject any vaccine as rushed and potentially tainted.”

Reuters: “Some have likened People of Praise, a self-described charismatic Christian community, to the totalitarian, male-dominated society of Margaret Atwood’s novel The Handmaid’s Tale.” “Others call it an ultraconservative group with an unusual mix of Roman Catholic and Pentecostal traditions.”

“In any case there has been renewed interest in the group since President Trump put one of its purported members, Judge Amy Coney Barrett of the Seventh District Court of Appeals, on his short list of candidates for elevation to the Supreme Court.”

Former White House Russia adviser Fiona Hill told CNN that the United States is increasingly seen as “an object of pity” and its standing on the world stage is eroding. Said Hill: “We are increasingly seen as an object of pity, including by our allies, because they are so shocked by what’s happening internally, how we’re eating ourselves alive with our divisions. We’re the ones who are creating all this. It’s not the Russians or the Chinese or anyone else. We are doing this to ourselves.”

“Dutch officials demanded answers from Pete Hoekstra, the U.S. ambassador to the Netherlands, on Tuesday in light of reports that the Trump appointee had held a private event for a rising right-wing political party and its donors at the U.S. Embassy in The Hague earlier this month,” the Washington Post reports.

First Read: “With Senate Republicans going for broke to fill the Supreme Court seat vacated after Ruth Bader Ginsburg’s death — after Brett Kavanaugh’s contentious confirmation, after impeachment and after the health care wars — today’s Senate is no different than the House.”

“Brute political force has replaced collegiality. Winning at all costs is more important than common purpose. And it’s election season all the time over at the U.S. Senate.”

“Make no mistake: Partisanship, politics and party before country have always played out on Capitol Hill, including inside the august Senate chambers. But in years past, the Senate could say it was different from the House.”

“Prime Minister Boris Johnson warned Britons on Tuesday that they should not expect to return to a normal social or work life for at least six months, as he ordered new restrictions that his government hopes will suppress a dramatic surge in confirmed coronavirus cases,” the AP reports.

“A $1 billion fund Congress gave the Pentagon in March to build up the country’s supplies of medical equipment has instead been mostly funneled to defense contractors and used for making things such as jet engine parts, body armor and dress uniforms,” the Washington Post reports.

“The change illustrates how one taxpayer-backed effort to battle the novel coronavirus, which has killed roughly 200,000 Americans, was instead diverted toward patching up long-standing perceived gaps in military supplies.”

“A former prosecutor on special counsel Robert Mueller’s team writes in a new book that the group failed to fully investigate President Trump’s financial ties and should have stated explicitly that they believed he obstructed justice, claiming that their efforts were limited by the ever-present threat of Trump disbanding their office and by their own reluctance to be aggressive,” the Washington Post reports.

“In an explosive tell-all that offers the most detailed account yet of what happened behind the scenes during Mueller’s two-year investigation of Russian interference in the 2016 election, Andrew Weissmann writes of his frustration that the special counsel failed to subpoena the president and otherwise pulled punches for fear of incurring Trump’s wrath.”

The New York Times has more on the book.

Ohio Lt. Governor Jon Husted (R) tried to promote pro-Trump face masks at a rally but was met with a huge chorus of boos.

“President Trump’s Supreme Court plans have created a major opportunity for Sen. Kamala Harris to go on offense,” Axios reports. “A confirmation fight puts Harris back in the spotlight thanks to her role on the Senate Judiciary Committee.”

“Allies still point to her grilling Justice Brett Kavanaugh in 2018 (clips of which have racked up millions of views on YouTube) and they laugh at her ‘suggested … hinted … inferred?’ exchange with Attorney General William Barr in May regarding the Mueller report.”

“Those are the electric moments that you can’t always learn during debate prep, and allies say they show that Harris is meticulous and skilled at the clapback — arguing both will serve her well in the Oct. 7 debate against VP Mike Pence.”