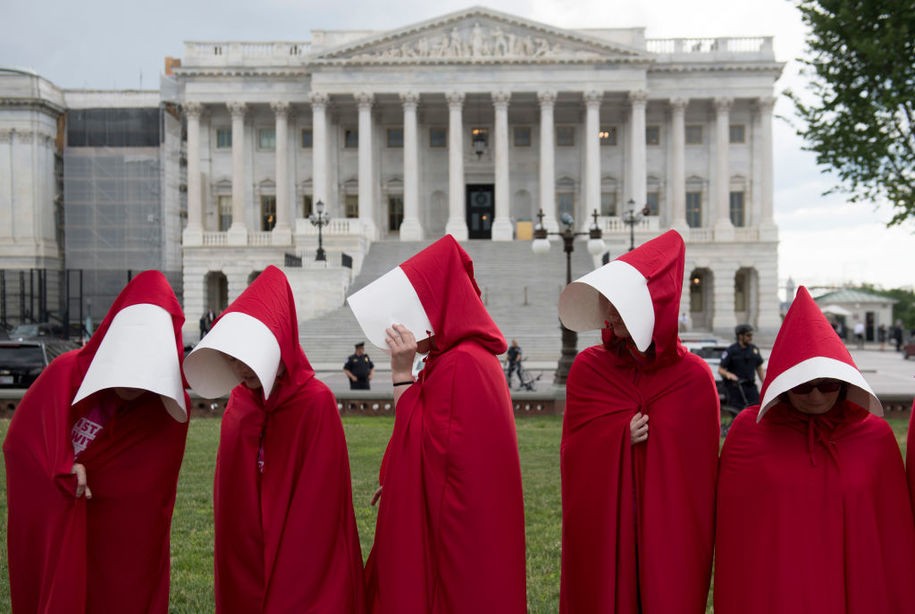 “House Democrats on Monday released their proposal for short-term legislation to fund the government through December 11,” Axios reports.

“This is Congress’ chief legislative focus before the election. They must pass a continuing resolution before midnight on Oct. 1 to avoid a government shutdown — something both Hill leaders and the White House have claimed is off the table.”

Meanwhile, Speaker Pelosi announced that Ruth Bader Ginsburg will lie in state inside the Capitol’s Statuary Hall on Friday, the AP reports. There will also be a public viewing at the Supreme Court on Wednesday and Thursday.

New York, Portland and Seattle were labeled “anarchist jurisdictions” by the Justice Department on Sunday and targeted to lose federal money for failing to control protesters and defunding police, the New York Postreports.

Senate Majority Leader Mitch McConnell (R-KY) said in a floor speech Monday that the chamber has “more than sufficient time” to confirm a replacement for Supreme Court Justice Ruth Bader Ginsburg before the election, Axios reports.

Senate Judiciary Chairman Lindsey Graham (R-SC) wrote to Democrats on his committee saying they would move “expeditiously” to advance President Trump’s Supreme Court nominee. Graham said his view of the judicial confirmation process had changed after witnessing the treatment of Justice Brett Kavanaugh, who was accused of sexual assault but was ultimately confirmed by the Senate. The problem with this obvious lie is that, after the Kavanaugh hearing and confirmation, he was recorded at the Atlantic conference pledging that he would not consider a court nomination in 2020.

President Trump told Fox & Friends that he plans to announce his nominee to replace the late Justice Ruth Bader Ginsburg on the Supreme Court on Friday or Saturday.

Manu Raju: “There will only be 39 or 38 days before the election if Trump names the pick on Friday/Saturday as he just said. That would be extremely fast for a confirmation process, which typically takes 2-3 months. Suggests a lame-duck confirmation vote is more likely.”

However, Trump also said he wants a confirmation vote before the elections, citing election disputes and his baseless claim of “fake ballots” being filled out: “We don’t want a 4-4 tie at the court.”

Washington Post: “There are two Republicans who already came out against quickly filling the seat this close to the election: Sens. Susan Collins (R-ME) and Lisa Murkowski (R-AK). And 22 GOP senators, as of last night, have come out in favor of supporting a vote on Trump’s impending nominee.”

“McConnell needs 51 votes to confirmed a new justice once she is formally nominated. He can afford to lose only one more Republican defector as Vice President Pence can break a tie. His gambit sinks if two more Republicans resist a confirmation vote.”

Huge caveat: “Collins did not explicitly say that she would not vote to confirm Trump’s nominee to the court if McConnell went ahead and held a vote before the election.”

“The coronavirus spreads most commonly in the air, through droplets or other tiny respiratory particles that apparently can remain suspended and inhaled, the Centers for Disease Control and Prevention says in new guidance,” the Los Angeles Times reports. “The smaller particles, known as aerosols, are produced when an infected person coughs, sneezes, sings, talks or breathes and can be inhaled into someone’s nose, mouth, airways or lungs, according to the CDC, which says that, in general, indoor settings without good ventilation increase the risk of contagion.” The agency in these new guidelines suggested the virus can transmit over a distance larger than 6 feet and that indoor ventilation is key to protection against its spread.

And then, the CDC removed a statement on airborne virus transmission, claiming website error, the Washington Post reports. That is not reassuring.

“But that writer, who goes by the pseudonym ‘streiff,’ isn’t just another political blogger. The Daily Beast has discovered that he actually works in the public affairs shop of the very agency that Fauci leads.”

“Although DeJoy’s changes have been paused until after the election, the new data shows that first class mail continued to be delivered late across the country after his reversal. In the Baltimore postal district, for example, the on-time delivery rate remained at less than 60% at the end of August.”

Ron Brownstein: “If the Republican-led Senate confirms a nominee from President Donald Trump before January, it would mark the third time a GOP-majority Senate that represents well below half of the US population — allocating half of each state to each senator — would elevate a justice chosen by Trump, who lost the popular vote, to the Supreme Court.”

“Two of the five currently serving Republican-appointed justices were nominated by President George W. Bush, who also initially lost the popular vote. The final one, Clarence Thomas, was approved by senators who also represented less than half of Americans.”

“These incongruities would be enormously deepened if Trump and/or the GOP-led Senate loses in November and confirms the nominee anyway.”

New York Times: “Two years ago, after nominating Brett M. Kavanaugh to the Supreme Court, President Trump strongly hinted that his choice for the next opening would be a former law professor he had named to a federal appeals court the year before: Judge Amy Coney Barrett.”

“Now, three years into that job, Judge Barrett is regarded — at least for now — as the leading contender to replace Justice Ruth Bader Ginsburg, who died on Friday. If Judge Barrett were nominated and confirmed, she would be the sitting justice with the least courtroom experience, but one viewed as a home run by conservative Christians and anti-abortion activists.”

“Donald Trump is moving toward nominating Amy Coney Barrett to replace the late Justice Ruth Bader Ginsburg on the Supreme Court, according to people familiar with the matter, despite the president saying Monday he’s considering as many as five candidates,” Bloomberg reports.

“Barrett was at the White House on Monday… She is a favorite of anti-abortion rights advocates, who are heavily lobbying the White House and Trump personally to nominate her. She’s preferred by Senate Majority Leader Mitch McConnell.”

President Trump is scheduled to spend the night in Miami on Friday night — the hometown of one Barbara Lagoa, a candidate for the Supreme Court, Politico  reports. Trump previously said he would make his pick Friday or Saturday.

President Trump told Fox & Friends that he did not believe Justice Ruth Bader Ginsburg’s wanted the next president fill her seat on the Supreme Court.

Said Trump: “I don’t know that she said that, or was that written out by Adam Schiff and Schumer and Pelosi. I would be more inclined to the second… But that sounds like a Schumer deal or maybe a Pelosi or Shifty Schiff.”

“The Manhattan district attorney’s office, which has been locked in a yearlong legal battle with President Trump over obtaining his tax returns, suggested for the first time on Monday that it had grounds to investigate him and his businesses for tax fraud,” the New York Times reports.

“The assertion by the office of the district attorney, Cyrus R. Vance Jr., offered rare insight into the office’s investigation into the president and his business dealings, which began more than two years ago.”

Andrew Weissmann, one of former special counsel Robert Mueller’s top prosecutors, says in his new book, Where Law Ends: Inside the Mueller Investigation, that the probe “could have done more” to take on President Trump, The Atlantic reports.

Weissmann says the investigation didn’t go far enough on Trump’s potential obstruction of justice: “When there is insufficient proof of a crime, in volume one, we say it. But when there is sufficient proof, with obstruction, we don’t say it. Who is going to be fooled by that? It’s so obvious… Had we given it our all—had we used all available tools to uncover the truth, undeterred by the onslaught of the president’s unique powers to undermine our efforts?”

“The Supreme Court vacancy created by Ruth Bader Ginsburg’s death leaves the Affordable Care Act in much greater jeopardy than it was just a few days ago,” Axios reports.

“Conventional wisdom had held that Chief Justice John Roberts would likely join with the court’s liberals to save the ACA once again. But if President Trump is able to fill Ginsburg’s former seat, Roberts’ vote alone wouldn’t be enough to do the trick, and the law — or big sections of it — is more likely to be struck down.”

“The court is slated to hear oral arguments the week after the election. If there’s a new conservative justice on the bench by then, the ACA would be in immediate danger.”

“Wire transfers from North Korean-linked firms with opaque ownership sometimes came in bursts, only days or hours apart, and the amounts transferred were in round figures with no clear commercial reasons for the transactions.”

David French: “Court-packing is dangerous. Yet if the GOP violates its principles to jam through a nominee in Trump’s last days in office, the pressure from congressional Democrats to pack the court may well be overwhelming. So Biden should make a deal with the lame-duck Senate. Keep the seat open, and he’ll pledge not to sign any legislation packing the Supreme Court while he’s in office.”

“This isn’t the ‘unilateral disarmament’ so despised by partisans. It’s a compromise. Both sides would shed Machiavellianism (for a moment, at least) and do something concrete to actually de-escalate America’s toxic political conflicts. America’s polarization is growing dangerous. Political violence stalks our streets. Now is the time for true statesmen to step forward, to put prudence before power, and reach a compromise that doesn’t just preserve the legitimacy of the court, it helps preserve the integrity of our republic.”

When President Trump sat down in the Oval Office with author Bob Woodward for the first of 18 eventual interviews, the president brought up judicial appointments four times and even had a list of judicial appointment orders displayed, prop-like, on the Resolute Desk — “kind of like he was cherishing it,” Woodward recounted to the Washington Post.

Trump boasted that he and McConnell “have broken every record” on judges, saying the issue is the majority leader’s top priority.

Said Trump: “The only one that has a better percentage is George Washington, because he appointed 100 percent. But my percentage is, you know, like, ridiculous.”